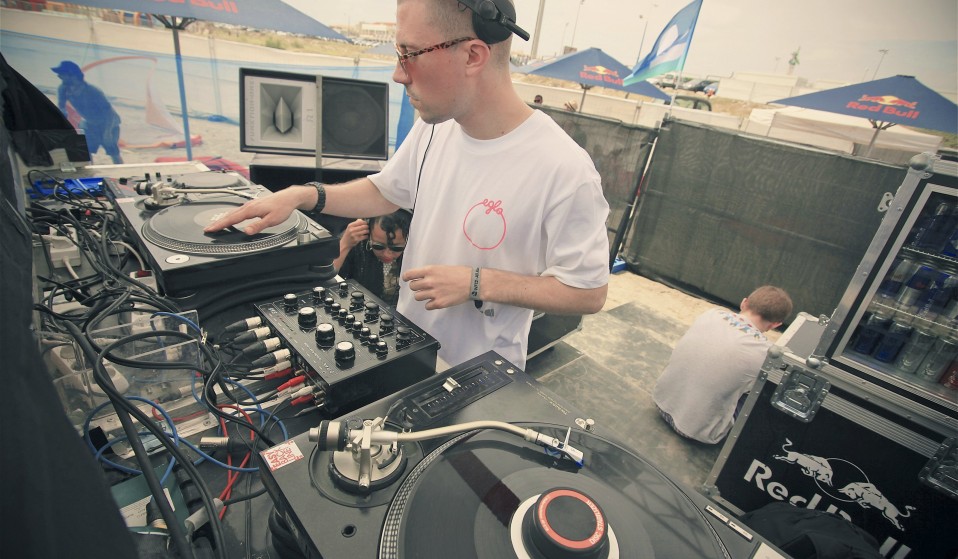 The internet has empowered DIY musicians like never before, but for Alexander Nut, labels will continue to help drive culture and creativity forward.

The internet has empowered DIY musicians like never before, but for Alexander Nut, labels will continue to help drive culture and creativity forward.

Alexander Nut has built a huge following as an eclectic and forward-thinking selector. Before Shoreditch’s Plastic People closed its doors for the last time this year, Nut was one of the leading figures who was both inspired by and contributed to the hallowed venue’s reputation for progressive music.

In 2008, he joined forces with DJ and producer Sam Shepherd aka Floating Points to found Eglo Records. Through their creation, Plastic People’s open-door policy to all types of great music lives on, and the label’s output is as diverse as it is expertly curated.

Huck caught up with Nut as he prepares to go b2b with Jeremy Underground at Red Bull’s Departure Lounge.

Eglo has been building up a strong following over the years, but for someone who’s never heard of it, what’s the label all about?
It’s a label that started out in East London. A combination of people and places and a certain moment in time. I have to really give credit to Plastic People, Rinse.FM and Deviation for being early catalysts during our inception. The label was started by Floating Points and myself back 2008, when we dropped our first 7”.

It has now grown into something much bigger, releasing artists from all around the world including Fatima, Funkineven, Mizz Beats, Flako, Dego and Kaidi Tatham, Gifted & Blessed, Shafiq Husayn, Kirkis, Sauce81 and more. I guess so far we have specialised in house, soul, broken beat and hip hop, but the doors are completely open, we don’t want to pigeon-hole ourselves… if it’s good music, great art, then we’re with it.

It’s never been easier to be a DIY artist who handles all aspects of production, distribution and marketing themselves. Do you ever see us getting to the point where labels are no longer relevant?
I mean… that’s such a big question. That’s a three hour debate. What is a label? And where does that fit in to the current industry and technological set up? For me, culturally and creatively record labels are still massively important and prevalent in my own and many others’ lives. So I think we’re safe for now. If you wanna do everything by yourself and for yourself, then that’s cool too. But I’m influenced and inspired by a long lineage of great record labels from Casablanca to T.K Disco to Def Jam and Blue Note, thats the way I like to do business.

What can we expect from you and Jeremy Underground going in at Departure Lounge?
Good question, we shall find out. I’m really looking forward to it, Jeremy is an amazing DJ. As always with my sets I’m prepared to take it anywhere. I think we both like to make dancefloors sweat, so I’m sure it’ll be a good one. Plenty of house, disco and boogie.

What was the last record you heard that made you say “What is this jam!?”
Pocket Calculator by Kraftwek

Who have you got your eye on for big things in 2016?
Shafiq Husayn, he has an album dropping with us on Eglo in 2016 which is incredible, featuring an all-star line up of special guests. Can’t wait for everyone to hear that.
We also got this WU15 project about to pop off! which is a joint venture from Henry Wu and K15, which I also think is incredible.

Linkedin
RELATED ARTICLES
OTHER ARTICLES
Students are being left to languish in unsafe housing, in some cases leading to serious health complications.
A 28-year-old from Texas was forced to travel across state lines for an abortion that would save her life and end a pregnancy that her baby had no way of surviving.
One year on from the fall of Afghanistan to the Taliban, Tiara Ataii speaks to those who have been forced to make the treacherous journey to Europe for safety, and the barriers and horrors they have faced.
Last week, Tower Hamlets council removed its nudity-restricting licensing conditions in a huge win for London’s kink community.
To mark the premiere of his new documentary on surfing giant Gerry Lopez, the filmmaker and former pro skateboarder sits down to share his unique brand of wisdom.
In the latest instalment of Photographers in Conversation, the creator talks portraiture, platforms and taking inspiration from Little Simz.