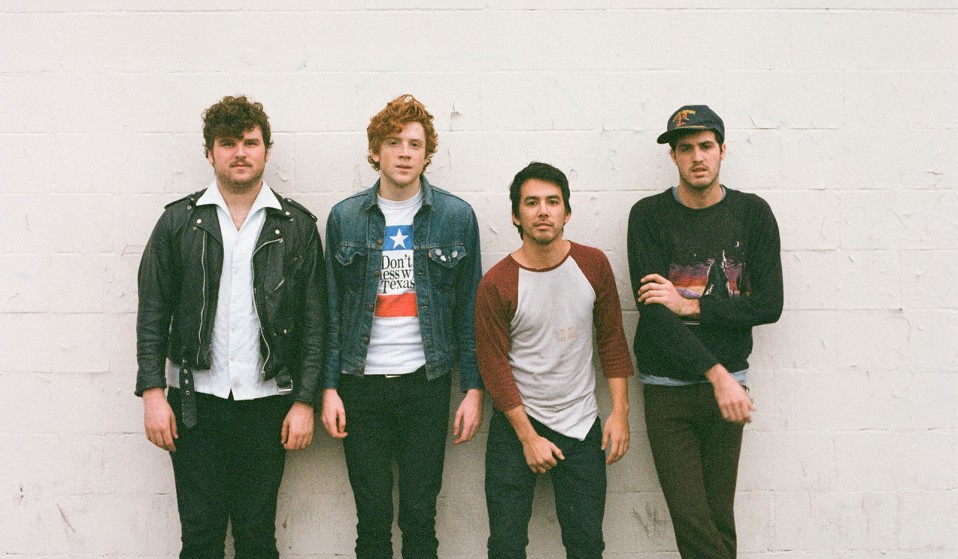 We ask frontman Zac Carper of LA punk band FIDLAR a question inspired by every track on their new album Too.

We ask frontman Zac Carper of LA punk band FIDLAR a question inspired by every track on their new album Too.

I discovered FIDLAR through their music videos. First somebody sent me No Waves, a VHS-style romp around LA, set to super speed and mimed by a friend; then I stumbled upon Cocaine, featuring the great Parks and Recreation star Nick Offerman as a disorderly drunk who pisses all over the city; and just recently the LA-based four-piece released a video for ’40oz. On Repeat’ (first single off their new album Too) – an ingenious montage of iconic music videos recreated, quite accurately, in a lo-fi way; the walls of the Jamiroquai Virtual Reality room and lockers of Britney’s Hit Me Baby all made out of paper, for example.

This is a band, I thought, who like to have a good time. The videos drew me in and an appreciation for the music followed. The sense of humour and energy of their visuals was reflected in their sound. The lyrics are funny, self-deprecating and smart, set to a soundtrack that belies the pop and punk influences of the founders, Zac Carper (frontman) and Elvis Kuehn (guitar), respectively. The new album Too is no exception.

“I hope when people first hear it, it sounds happy, and then when they listen to the lyrics they’re like, ‘Oh this is sad actually!’” Zac tells me over the phone. Most interviews with Zac tend to focus on his struggle with addiction and in an attempt to avoid covering old ground I decided to try something different with this one – using each track on the album as a jumping-off point to ask Zac a different sort of question. Of course, like in life, the conversation steered back to familiar territory – but at least you won’t hear about Nick Jones the accountant (a dead ringer for Dr. Gonzo the attorney) elsewhere. Enjoy.

‘40oz. On Repeat’
Can you tell me about the first time you got drunk and what it was like?
I threw up all over the place, I remember that. I grew up in Hawaii. It’s a bizarre place. I grew up in a very one-road town – I had a bunch of chickens – and there weren’t really any particular scenes, it was just ‘the music scene’ – so all kinds of different bands would play at the same venue. My grandpa was a musician and he taught me how to play piano but I just loved writing songs – I didn’t know I was going to be in a band. Then when I moved to LA I met Elvis and he’s ingrained in the punk world. So we got together and started playing songs – that’s how FIDLAR started.

‘Punks’
Some people say punk is dead – that it used to be progressive and now it’s just nostalgic – what do you make of that?
I think just different things are punk. A kid staying in his room with a shitty computer learning how to write a song and record a song with his computer, I think that’s fucking punk. I think kids making their own t-shirts, that’s punk. I don’t think a certain genre or a style of music is punk. Doing it yourself because nobody else will is the punk thing for me.

‘West Coast’
What’s an average day for you like on the West Coast?
I surf a lot. So there’s that. There’s no place like Southern California in the whole world. It has its own unique thing going on. You spend a lot of time outside because the sun’s always out and it’s definitely a particular lifestyle – everybody’s a little bit more relaxed, there’s no hecticness. But I’m kind of neurotic I guess, in that I need to be working all the time. So I’ve made my own little version of the West Coast.

‘Why Generation’
If you were president, what would be the main issues you’d want to address for young Americans like yourself?
I think the older I get the more political I get. But compared to a lot of people I know I’m not political at all… I think a lot of shit is fucked up though. We definitely need to figure out a way for Americans to have free healthcare. That’d be the first thing I’d do… But honestly I don’t think young people really give a shit. Everybody’s focused on themselves, and I’m not saying that in a bad way – to each his own – but everybody’s so obsessed with taking selfies and documenting themselves that they do seem to miss out on the actual experience you know?

‘Sober’
If you were going to rehab tomorrow and you could only take one book, one film and one album what would they be?
Okay I’ve been to rehab a lot so I already have this one down. The book would probably be some science-fiction shit like Dune. The whole thing about rehab is that you don’t want to feel like you’re in rehab at all, so you want to get out of yourself as much as possible. The album would probably be that first Vaccines record. And the film, Goodwill Hunting!

‘Leave Me Alone’
Who or what in the world annoys you the most?
I gotta go back to the selfie thing. Jumping on stage and taking a selfie with me when I’m playing – I can’t do that. I will not let that slide.

‘Overdose’
Do you ever think about your legacy? How you’d like to be remembered?
I’d like to make kids aware that this shit [making music] is easy. And it’s good for them. It’s therapeutic. I’d like that to be my legacy.

‘Hey Johnny’
Who’s your best friend and what do you like about them?
My good friend right now is Nick Jones, he gets into some weird shit man, I love it. Every week he’s getting into something, these weird sex clubs, he just has these crazy stories. We met in rehab. He’s an accountant. He’s very entertaining.

‘Stupid Decisions’
What advice would you give to your young self?
I would say don’t do heroin.

‘Bad Habits’
Your worst habit and the habit you most deplore in others?
I flip out a lot. I have a short temper. I don’t know about other people. That’s a hard one. Maybe people driving shitty?! I have road rage sometimes.

Too is out September 4 on Wichita Recordings.

Linkedin
RELATED ARTICLES
OTHER ARTICLES
The New York rapper pushed hip hop into bold new realms. He lived through a dark time – but with one hand on the mic, he survived to tell the tale.
Pissed Jeans are a noisy punk band based in Philadelphia whose music will make you want to smash your shit up.
Tame Impala music flows out of Kevin Parker’s wizard mind and fills the world with surprise psych fans.