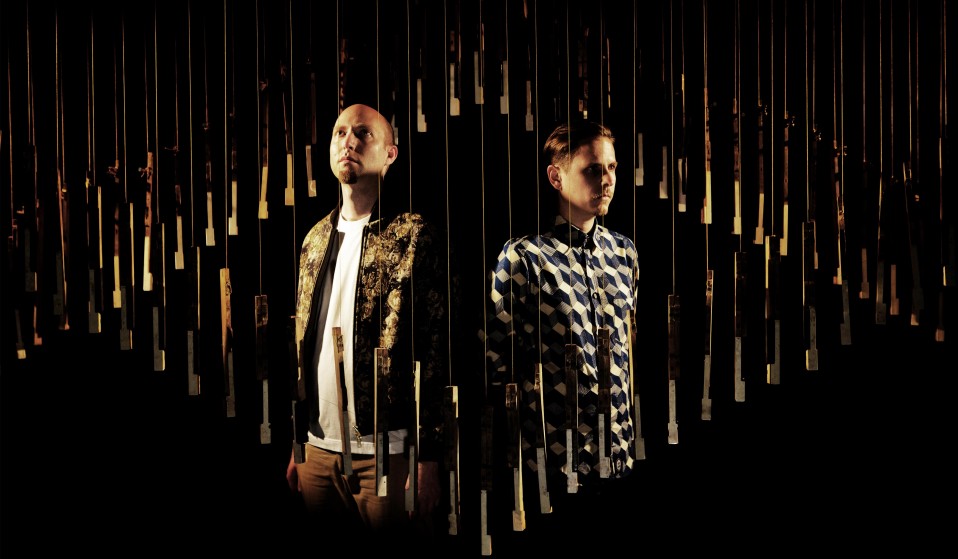 Ever since Jimi Hendrix dropped by in the summer of 1969, the walled port city of Essaouira on the Morccan coast has provided sanctuary to musicians seeking a change of scene. More recently, electronic production duo LV left their cramped South London studio behind and joined Bologna-based experimental group the Fawda Trio to record at Dar Souiri, a concert venue and cultural centre within the city’s ancient walls. In an echoey room next to the open central courtyard, they found an ageing, poorly maintained French colonial-era piano which provided one of the many eclectic field recordings that flavour their incredible new album, Ancient Mechanisms.

After fusing South African Kwaito with London bass music vibes on their earlier LP Sebenza , LV regularly get dubbed globetrotters. But when I meet Simon Williams and Will Horrocks at their studio above the fabled Transitions mastering studio in South London – which shaped the evolution of dubstep by helping to carve out the early sound of Skream, Benga, Coki and Mala – they’re adamant the reality is far less glamorous. Like most electronic music, theirs is hammered out through days of listening to loops over and over, wrestling with software and endless mouse clicking. But flip over Ancient Mechanisms, scan the track names such as ‘Ruiselede’, ‘Dansaetstraat’, ‘Transition’ and ‘Dar Souiri’ and you’ll find the evidence of the travels and places that have left fingerprints all over the record.

LV met while studying at London’s UCL. “This is an incredibly boring story by the way, it just involves us sitting in a room, staring bleeding eyed at a computer, years, months on end,” Will explains. “That has become our career amazingly, staring at a computer screen. In much the same way that most of the rest of the world does, I guess.”

Collaborations have injected fresh energy, like their third album Islands, which featured London grime MC and poet Josh Idehen. But conscious of the need to get out into the real world to balance out the hours of studio time, their outside influences and forward-thinking production often help their releases sound lightyears away from South London. Formerly a trio with Gerv Gordon, who now releases solo as Okzharp, Gerv’s experiences in South Africa and contributions from Johannesburg MCs gave Sebenza its African colour. “You can get stuck in a rut in any part of life, music as well,” Si explains. “You just end up producing similar sort of things and not really understanding how you can change up what you’re doing.”

One such opportunity that set them on a different path towards Ancient Mechanisms was a live Maida Vale session with Armenian jazz pianist Tigran Hamasyan for Gilles Peterson’s last BBC Radio 1 show in 2012. “It was more one of those moments where we were terrified we were going to fuck it up,” Will explains. “We get a bit intimidated by people who are virtuosos on their instruments, when we just sit in this little room on our computers all day.”

Despite their misgivings, the session was incredibly well received and led them to Ruiselede, a small town in Western Flanders, Belgium with Hamasyan a year later. With a skeleton recording kit, they were let loose at Maene Pianos, a sprawling piano showroom, workshop and collection of historic instruments. They spent a day wandering around the musical Aladdin’s Cave, recording Hamasyan jamming on a variety of ancient and obscure pianos, which would eventually form the backbone of the record.

As in Essaouira, they embraced the character of recording in a non-soundproofed, non-studio space and as they began to engage with real instruments more than ever before, became drawn to the imperfections of each one. They captured the collateral or incidental sounds, like clicks, creaks, noises of hitting the keys and so on – even giving their screeching tape delay a ‘solo’ at the start of ‘Quick Return’. “To me it gives some kind of slightly more honest context,” Si explains. “Whereas, a lot of the time with recording stuff you’re really abstracting the sound of the instrument from what it actually sounds like.”

They painstakingly built their own instruments on Logic from sounds recorded by smashing bits of metal together on the streets of Brussels and from a “beautifully out of tune” old ship’s piano that was left in Si’s flat by the previous tenants – which took months to recreate digitally, but features heavily on the album.

Ancient Mechanisms puts the immense piano skills of Tigran Hamasyan in a new context, surrounded by the beats and rhythms of UK dance music. It’s certainly not the first time live musicians have appeared on electronic records, but the whole approach, which blends samples from the streets of Ruiselede and reverb-y recordings from Morocco and Belgium with clicks, screeches and imperfections of the real instruments played, makes the album live and breathe. Ancient Mechanisms has a remarkable organic quality that conceals the months spent assembling it piece by piece on a pair of Macs in LV’s pokey South London studio.

LV’s Ancient Mechanisms is out now on Brownswood. Catch them live at St. Pancras Old Church on Friday October 30.