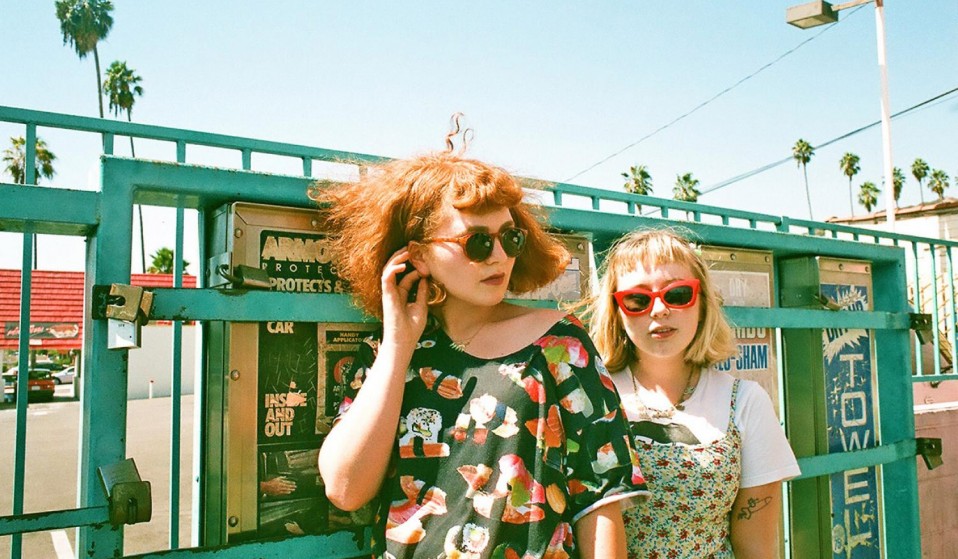 After the release of their debut LP last week, we talked to Philadelphia/LA duo Girlpool about the desire for new scenery and the need for constant change.

After the release of their debut LP last week, we talked to Philadelphia/LA duo Girlpool about the desire for new scenery and the need for constant change.

Harmony Trividad and Cleo Tucker seem like they’re genuinely happy to be sitting in Rough Trade Records on a Tuesday evening. They’ve been in London for four days now – enough time to get over the jet-lag – and it’s only a short trip, three shows in a week, before flying back to the East Coast to push on with their relentless touring schedule.

This state of constant movement has been central to Girlpool’s existence from the start. Born out of a chance meeting at The Smell in their native Los Angeles, the surprise success of their debut EP soon had them touring California and then the country rather than attending college, all something of a shock for a teenage punk band with no drummer. Then, after a year or so making it work at home in LA, they decided to gamble and swap the West for the East, moving to Philadelphia and joining an ever-growing DIY scene.

It was during this stage of restlessness that they wrote Before The World Was Big, a debut album that seems worlds away from the EP that they’d written only weeks before. Where their early recordings favoured traded yelps, here their harmonies are elevated, drawing out a record of intimate nostalgia and emotional contradiction.

Which leads them back here to Rough Trade East, talking to Huck before an in-store that will see them run through their new material with a characteristically reckless joy.

The album seems like a big departure from the EP in a lot of ways, but you wrote the two so close together. Was it a conscious decision to change the sound?
Cleo: We’d just been writing a lot.

Harmony: I feel like the EP was just something we’d thrown together so to speak.

C: We were just beginning to explore this project and learning how we work together.

H: Even though we wrote some of the songs quite close to writing the EP songs, I feel like the record is kind of a mark of growth in our understanding of where we want it to continue.

Lyrically it seems to be looking back to the past a lot more, there seems to be a constant theme of nostalgia on the record. Is that just a mark of you knowing each other better?
H: This is kind of a funny thing to say but, how the EP and playing shows shaped our lives created this stage for us. I feel like so many of the experiences we had around playing shows together when we first started, those things we were going through and have been for our whole lives. The conversations we were having created a slate for us to develop the ideas that we wrote about on the record. We were both going through a lot of changes in our lives and experiencing a lot of relationships and friendships that made us feel certain ways that we were exploring together. We kind of anticipated [the EP] as something that was a cassette that we’d throw around and have in the back of our car for like three years.

C: I remember at the time when we put out the EP, Harmony was already in college and I was planning on graduating in a few months and going straight away to school so it was just sort of “let’s put out a tape because we have fun playing music and this is silly and funny and some of these songs are about a joke.” And then we had this cassette and we played shows in LA and I was like “oh, maybe I’ll defer to college because I’m having a lot of fun.” And then it became “oh, we’re touring” and “oh, we want to keep writing.”

H: So those experiences sort of shaped what the record became in a big way.

Then the decision that came from that to move across the country – did that stem from growing the band or was that something you always had in the back of your head that you wanted to do?
C: We’ve learned a lot on tour. I think that our first few tours, seeing all these places that we had never been before and just feeling so small and excited to jump in. That facilitated that feeling.

H: I feel like we both, as people, are really curious and interested and excited. Every decision we’ve made has been one of exploration of our world and ourselves. 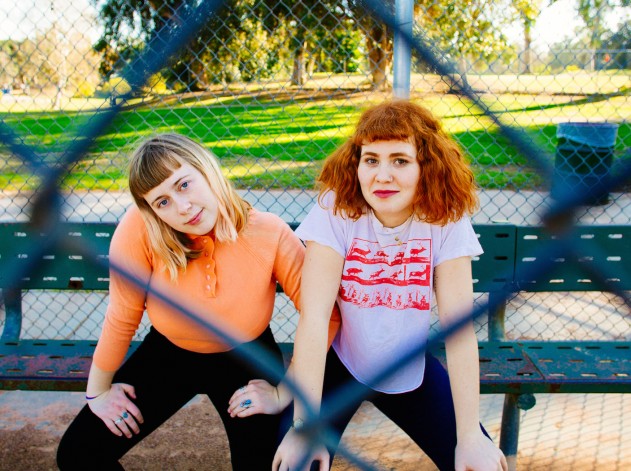 And LA just felt a bit small in the end?
C: Well we’ve been there since we were born. A lot of the things we’re doing, we’ve never done before and it sort of feels right to be in a blank new place because that’s where our head is right now.

Jaxon Demme still does your artwork and you’re close friends with [fellow Angelinos] Arjuna Genome. There was definitely a scene that you were involved with in LA and you felt quite close to. It was a big part of your formation…
C: That’s our foundation, for sure.

H: I mean, going back, that’s who we’re with. That’s our group. There’s definitely still closeness there in a huge way.

C: And our families are there. LA is home too.

H: It’s just that we’re both really curious and we don’t want to feel static and to be in the same place for so long. It’s great and it’s comfortable and feels good but sometimes it can be hard to feel as though you’re growing although you might be. It’s sometimes hard to recognize that growth if you’re just in the same place.

C: It also shakes you up to move. Things are uprooted that you might not have been paying attention to in your comfortable life because it can mask feelings or they distract. It’s great, though. We were just there for ten days at home which was really nice. And now were back on it.

It must feel strange doing something so intimate tonight before doing such a big show tomorrow [Wednesday June 10 w/ Waxahatchee at Electric Ballroom]?
C: Most of our shows, I would say, feel intimate.

H: I think we try to make sure they’re as intimate as they can possibly be, regardless of the environment… we love to talk to people and meet people.

C: And to break that space between band and audience.

Is that easier to do with just the two of you on stage?
H: I feel like we’re both really comfortable being ourselves around each other and I think that really allows us to break that wall as often as we possibly can during a set. To be ourselves and be wide-eyed and alive and not trying to dominate or be muted. 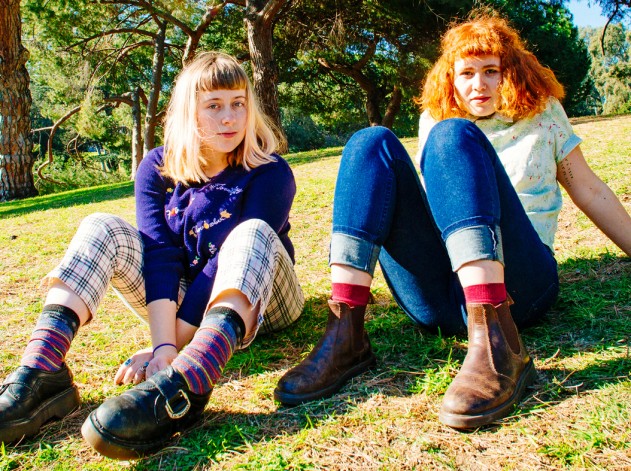 And audiences respond to that…
C: I feel good when I experience music and I don’t feel like I’m being rained on rather than [laughs] part of the rain.

Is that’s something that’s easier to keep going when you’re constantly moving around and constantly changing, to still stay close to yourselves and not feel that disconnect from home or who you are?
C: We just communicate as much as possible to each other. Just literally feel everything we’re feeling. And then explore why with each other, to keep our heads close to the ground.

H: We really just talk about expression pretty much constantly. Sometimes you have a thought and you can’t really recognise it unless you’re communicating about it. You can’t even have it pulled out of you because it’s so deep in the recesses of your brain. So it’s so crucial that you communicate about it with another person or at least write about it or explore it in some manner because otherwise it can fall to the wayside and bubble up and explode. It’s terrible.

C: Totally. It’s like when you’re writing about something and all of a sudden you write something down and you didn’t even realise you were feeling that way. Sometimes your brain is moving quicker than you can recognise.

Before The World Was Big is out now on Wichita Recordings.

Linkedin
OTHER ARTICLES
Canadian four-piece Viet Cong, featuring former Women and Chad VanGaalen musicians, reveal some of the motivations behind their controversial output.
Best Coast are just letting things happen; channeling the positive vibes to create breezy music for midsummer days.
In his new documentary Charlie Siskel investigates Chicago photographer Vivian Maier, who shot an incredible body of work during her lifetime, discovered after her death.