Art & Culture / Music / In conversation with GOAT: the Swedish voodoo sect who make the best party tunes ever 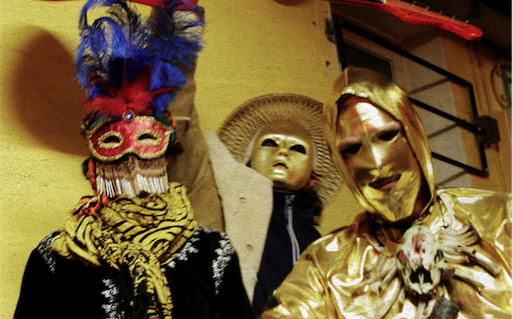 We catch up with psychedelic rockers Goat ahead of their highly anticipated Field Day performance – possibly their last London show ever.

We catch up with psychedelic rockers Goat ahead of their highly anticipated Field Day performance – possibly their last London show ever.

I must admit I’m a relatively new Goat fan. I first heard the band at Green Man Festival 2015 when some friends convinced me to miss St Vincent on the Sunday night and see “this amazing tribal-ish band in crazy masks”. I was relatively sober, at the tail-end of the festival, and a bit devoid of endorphins but Goat absolutely blew me away. They are probably one of the best live bands I have ever seen.

Their psychedelic music, which has been described by more intelligent people as “rock blended with tribal rhythms, krautrock and afrobeat”, made me want to simultaneously talk in tongues, smash things up, and sort of sway-shake like I’m having a dance seizure.

The band have just two albums – World Music and Commune – and are rumoured to be splitting up after this year’s festival tour. They also have a bit of a reputation for self-mythology. Here’s what I discerned from Wikipedia:

“Goat, though currently based in Gothenburg, claims to hail from Korpilombolo in Sweden which, according to the band’s own publicity, has a history of voodoo worship after a witch doctor came and lived there. Supposedly, when Christian crusaders came and destroyed the village the surviving people fled and placed a curse on the town. This has been described as ‘a lovely story, if possibly not entirely rooted in reality’.”

Keen to find out more, we emailed Goat some questions, ahead of their performance at London’s best festival Field Day – a celebration of contemporary cool cats (James Blake, Skepta) and bonafide muso legends (PJ Harvey, AIR) in Victoria Park, East London. I can’t find a trusted source to confirm the number of Goat bandmates (although I saw them on stage at Primavera festival in Barcelona last night and it was two female lead singers, two male guitarists, and a drummer) and I have no idea who exactly from the band answered my questions. But I like to think it was a team effort.

There’s a lot of mystery surrounding the origins of Goat. Why keep things so secret?
Nothing is secret? We are a voodoo sect from northern Sweden that worships everything from Shiva to Oden. And we play music in masks. Where is the secret?

Are any of the identities of the band known?
Only fluffan. Our famous leader.

You conjure a voodoo vibe. Are any of you actually religious?
We are all deeply religious. All of us spiritually connected by constant transcendental meditation to the overwhelming experience of being part of the universe.

What do you think of modern-day spirituality?
I dig everything with a positive vibe. All that embraces life, peace and equality is my bag.

Where do you find inspiration for the way Goat looks and sounds? Places/people?
On planet earth and beyond.

How difficult is it to perform so energetically in those robes and masks?
It is actually easier than you might think. But we are always scared that they someday will fall off..

Have you known each other since you were kids? What was it like growing up in rural Sweden?
Some of us have. And some are quite new friends. But we are sure our spirits have met before somewhere in time.

What is Goat’s collectively favourite film? And book?
The passion of Christ by Mel Gibson. And Bhagavad Gita.

If Goat could right one wrong in the world what would it be?
Oh man.. the world needs to drop all ideas and just realise that we are one people. And we are mothers and fathers of all children. Take some responsibility for God’s sake. Grow up and question yourself.

How do you prepare for a festival like Field Day? Is it a structured more ritualistic performance? Or do you improvise in the moment?
We rehearse, meditate, eat a full dinner, do some push-ups and then we improvise.

Catch Goat and tons of other amazing acts at Field Day June 11-12 at Victoria Park, East London. Tickets available on the website.

Linkedin
RELATED ARTICLES
OTHER ARTICLES
Steel City is often overlooked when it comes to the country's cultural radar despite its role in shaping electronic music.
Photographer Bud Glick recounts documenting everyday life in the area, and what it taught him about the Chinese immigrant experience.
Photojournalist Fiora Garenzi spoke with people still living in Eastern Ukraine, an area which seen some of the heaviest fighting since the war began.
From the early originators to the female writers at the forefront of today’s scene, we talk to the artists redefining graffiti’s consciously macho origins.
Following the release of his latest album, the rapper talks about finding a new approach to songwriting, attitudes to poverty, and why his music is more than a political statement.
Protestors gathered outside Downing Street following the latest atrocities committed by Israel against Palestinians living in the besieged strip.