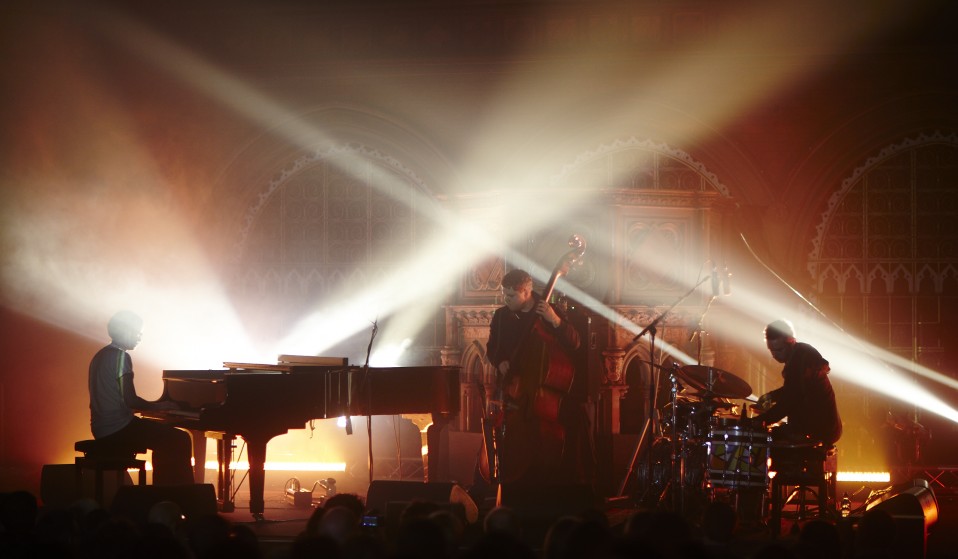 Manchester trio GoGo Penguin are tearing up the genres with Man Made Object, a rowdy not-quite-jazz album that nods its head to Four Tet and Apex Twin.

Manchester trio GoGo Penguin are tearing up the genres with Man Made Object, a rowdy not-quite-jazz album that nods its head to Four Tet and Apex Twin.

“I started out in indie bands and stuff, playing Joy Division tunes, then got into going to clubs, listening to drum & bass. Now here we are, kind of playing jazz… kind of,” explains bassist Nick.

Manchester not-quite-jazz trio GoGo Penguin have been making waves, plotting an uncharted course through new musical territory and cruising effortlessly over the boundaries of genre. Man Made Object is their debut on revered jazz institution Blue Note, but there’s nothing about GoGo Penguin that’s beholden to the past. The kaleidoscopic record from bassist Nick Blacka, pianist Chris Illingworth and drummer Rob Turner, reflects the diversity of their musical backgrounds and the trio delight at putting their music in new contexts.

Fusing classical and electronic elements, the album moves at times with the tempo and energy of dance music, and at others adopts the meandering feel of trip hop. There are nods to visionary electronic producer Keiran Hebden, aka Four Tet, on ‘Branches Break’ and influences from Aphex Twin to Amon Tobin and late jazz pianist Esbjörn Svensson.

This is jazz that has stomped the floorboards of pub gigs around Manchester and swayed to the beat at the city’s cavernous warehouse raves – which feels equally at home in a German concert hall or festival stage in Croatia. “We played at Worldwide Festival in the south of France in between two big DJs,” Rob explains. “Some of the crowd are like what the hell’s going on and others are like, ‘This is amazing!’”

GoGo Penguin recently re-scored Godfrey Reggio’s cult 1982 film Koyaanisqatsi, which explores the relationship between humans, nature and technology in a blistering dialogue-free montage. “There’s a massive section in the middle that’s totally nuts and really complicated so we worked outwards from there,” Rob explains. “Some of it is heavily composed and are other bits are more of a vibe. Depending on where you cut the sections up, it totally changes the meaning of the film.”

It seems Koyaanisqatsi could have been starting point for many of the ideas explored on Man Made Object, touching on similar themes, such as pianist Chris’ interest in robots, transhumanism and human augmentation, before wandering into Hindu mysticism and sleep paralysis on ‘Smarra’.

At the end of 2015, they shared a stage at the Barbican in an electrifying collaboration with choreographer Lynne Page’s dancers, at a sold-out London Jazz Festival show. Billed together with Kamasi Washington, the night was curated by Gilles Peterson to showcase the cutting edge of jazz today. “It seemed really open,” explains Chris. “There were certain elements Lynne was looking for and knew how to use in a way that made the collaboration work.”

GoGo Penguin don’t define themselves as a jazz trio. But they are surfing a resurgence of jazz – in the loosest sense of the word – driven by artists like Washington, Kendrick Lamar and Flying Lotus, who are happy to break all the genre’s rules and fuse it with hip hop, rock, dance music and soul.

There’s too much going on and too much baggage from other genres to fit snugly into the jazz box – and their music is all the richer for it. Indeed, many of Man Made Object’s ten tracks started as drummer Rob’s electronic compositions, created on Logic and Ableton. Their sound has echoes of Robert Glasper’s piano-driven jazz, but what GoGo Penguin borrow most effectively from jazz is the spontaneity and improvisational flavour that runs through their music.

“We started because we had these ideas and wanted to push them as far as we could,” Nick explains, acknowledging the group’s passion for electronica and music that gets people moving. “We could have got the synths out but we were most comfortable on these instruments. We don’t think too much about the styles of it really, it’s just all music at the end of the day and assimilating our influences.”

GoGo Penguin’s Man Made Object is out now on Blue Note.

Linkedin
RELATED ARTICLES
OTHER ARTICLES
On the fifth anniversary of the tower fire, around 18,000 joined the walk to remember the 72 dead and to demand justice.
The singer-songwriter discusses her intimate new project – and the advice she’s picked up across a career as one of rock’s leading voices.
Writers Gracie Mae Bradley and Luke de Noronha take on the callousness of borders, arguing for a world beyond them.
Photographer David Hoffman recalls documenting the extreme wealth inequality around Tower Hamlets and Hackney int the 1980s.
A new edition of a seminal book brings together iconic images of the band onstage in their full glory and backstage in moments of unguarded camaraderie.
The curators of a new exhibition are hoping to shed light on Plymouth’s vibrant but often overlooked nightlife.