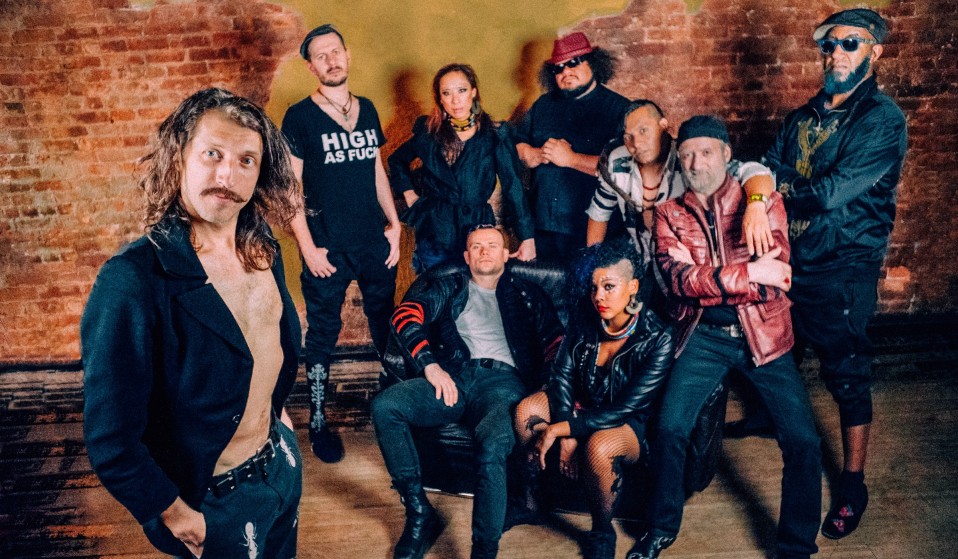 Ahead of the release of their new album, we catch up with Gogol Bordello frontman Eugene Hütz to talk about immigration, hypnosis and growing your soul.

Ahead of the release of their new album, we catch up with Gogol Bordello frontman Eugene Hütz to talk about immigration, hypnosis and growing your soul.

There’s no group quite like Gogol Bordello working in the music industry today. The global nine-member troupe, led by free-spirited frontman Eugene Hütz, have created their own unique sound – mixing frantic punk guitars, traditional Eastern European accordions, and a Latin American groove. Every single song is a hymn to being borderless, and a testament to the band’s multicultural identity.

When I call Eugene, he’s in New York City – his current base, and the birthplace of Gogol Bordello’s latest album, Seekers and Finders. The 11-track album, inspired by everything from immigration to intoxication, commands its listeners to feel rather than worry.

Surprisingly for someone who can inspire a frenzy of sweat and emotion within seconds, Eugene speaks calmly, with a thick Ukranian accent and considered pauses. When we catch up about the album, he is keen to talk about the more spiritual side of his music – a discussion which, he says, goes way deeper than politics.

The album was written between three continents. Did you feel a difference in the type of music you created, according to the place you were in?
Yes, but I don’t write out of that place – I write from within. Everything leaks into the cooker, but essentially what I do is a work of imagination, expanding upon experience. It’s about taking the first-hand experience and putting it into a super-conducting, super-collider of imagination. Gogol Bordello thrives on a sound of its own. It has nothing to do with using pre-existing melodies or pre-existing formulas.

You address immigration often, but you’ve also said time and time again that Gogol Bordello’s music is not political. How do you distinguish between the political and personal?
I’d say it’s correct to say it’s far from politics. Let’s face it, when it comes to discussing the human condition, there is a school of thought that says we are metaphysical beings having a human experience, or that we are human beings having a metaphysical experience. I don’t think there’s any school of thought that says we are political beings. That aspect of our being is a kind of disease – a skin disease, because it’s external. I don’t find anything for myself in the world of politics. When I was 15 years old and a part of the anarchist circle, I thought that we had all the answers – I would say I still remain to be an anarchist on most levels, but I certainly don’t think that there are any answers to give.

If the point isn’t the answers, then should we be looking for the questions instead?
Let me give an example of how I feel – actually, fuck me – I’m going to give you an example of someone I have an affinity with. There was a very prominent spiritual, religious and political leader in Sweden, whose name escapes me at the moment. I was reading his autobiography, and what struck me was – while he was this very empowered leader throughout World War II, and went on many missions to Latin America and Africa – when it came down to writing his autobiography, none of that stuff had any mention. His autobiography consisted entirely from his internal world, and his inner life. There was not even a single mention of WW2, given that he lived and breathed it. I sort of feel an affinity with him.

Music is a reflection of inner perseverance and an inner determination to stay unique and preserve the voice of your own soul, in an era which I would describe as character genocide. No personality is allowed, and everyone seems to be happy to comply with such a phoney idea of self-expression.

Is that kind of compliance what you’re addressing in your song, “The Saboteur Blues”?
That song in particular cuts into a different pie. It’s quite ambitious to try to sum up any kind of mystical teaching or message into a pop song, but that’s kind of what I’m trying to do. The self-sabotage in the world we’re living in comes from being obsessed with the past and the future – your chief killers, your chief robbers. It seems to be so rare to meet a person who can actually hold their attention in the present – something which is so vital.

Why do you think we have this obsession with the past and the future?
It’s not orchestrated by anything. It’s just human laziness that dictates this condition. To hold the field of presence is an effort – it is actually quite a severe effort, and it will take a lot of your energy also. But the cultures we share now, they don’t educate us to spend your energy holding on to the present – they encourage you to waste the energy on detrimental and neurotic ways of being.

Would you say that this ability to be in the present is something that you’ve learnt over time, or is it something that comes naturally to you?
I think I always had a streak for it – it’s just the way I am. But it’s a lot like playing an instrument – anybody can learn to play the guitar, really. Not everyone is going to become anything near Paco de Lucía, but pretty much anyone can conquer some basic “guitaring.”

I think in my own case, music and art kind of gave me the opportunity to ripen in this feeling. It’s a cumulative number of hours and days, months and years, that I’ve spent in this condition – this exalted, elevated high state of being on stage or playing music. I think it’s definitely contributed to solidifying this feeling.

I was in a quite lucky circumstance too. When I was a teenager growing up in Ukraine, we were in a very particular atmospheric bubble of creating music and being involved with art. We had access to just about anything from the Western world through to the black market, and we also had access to our own mythological, folkloric, raw material. We had absolutely no infrastructure with any taste of commerce to it. For a number of years, I was creating music in an environment that was thriving on nothing else but free will and creativity. There were concerts and exhibitions that were absolutely not attended by anyone who had any sort of commercial interest, which is pretty much non-existent in the Western world.

Even when I arrived in the States and met phenomenal people like Fugazi, who ran their own record company, they were still interacting with a commercial infrastructure on some level. In a way, I had an advantage of developing my creative kicks in an environment that was absolutely innocent and naive. I’m really grateful for that. It’s an unforgettable laboratory.

What do you think turned you on to music in the first place?
It was an awareness of the fact that when I’m experiencing music I vibrate distinctly differently. I essentially was educated into rock music by my father, which is another amazing fortune that fell into my lap. Rock music was quite uncommon – it was nowhere to be found on the TV or radio. The ratio of people who were introduced to it was about one to every 10,000. I could tell that I was experiencing my daily reality very differently from kids in my school, because before I left the house I listened to Jimi Hendrix and Parliament Funkadelic. Later on The Sex Pistols and Birthday Party, then Joy Division, and so on and so forth. I could just tell that I was actually on a different planet from them.

I started playing instruments and weaving myself into this very enjoyable frenzy by playing drums. Then, by the age of 14, I was starting to write songs and wishing to be a leader of the band. It’s actually quite a common route – you’ll find that extreme frontmen often start out as drummers. Let’s take James Brown and Iggy Pop, without who I don’t think anybody would be pursuing any kind of nihilism or existentialist rage on stage. That whole school of performance was basically created and outlined by the greatest sensei, Iggy.

Who are some artists that you find inspiring today?
Nick Cave and The Bad Seeds. I always found them to be a source of incredible inspiration, and it never left me. In fact, nobody brings it like Nick and his band. I’m interested in something kind of alchemic: I’m pretty much not looking at music for what it really is, but rather as a component of a larger picture.

Seekers and Finders by Gogol Bordello is out August 25. You can pre-order it on their website.

Linkedin
RELATED ARTICLES
OTHER ARTICLES
In Sheffield, food delivery drivers are fighting back against one of the giants of the gig economy.
Photographer Philipp Mueller reminisces on shooting Zurich’s thriving nightlife in an era fuelled by experimentation.
A new book traces the legislation’s tumultuous history and the lasting impact its had on LGBTQ+ activism today.
Those set to be impacted by the governments ’undemocratic’ bill explain why it risks silencing them.
While police claim that body cams increase accountability, the proliferation of the tech raises questions over who it really serves.
Photographer Melanie Nissen recalls capturing the characters, fashions and rarefied chaos of a rapidly-expanding set of punk bands who helped to redefine the genre.