Art & Culture / Music / Goldie is not interested in your irrelevant questions 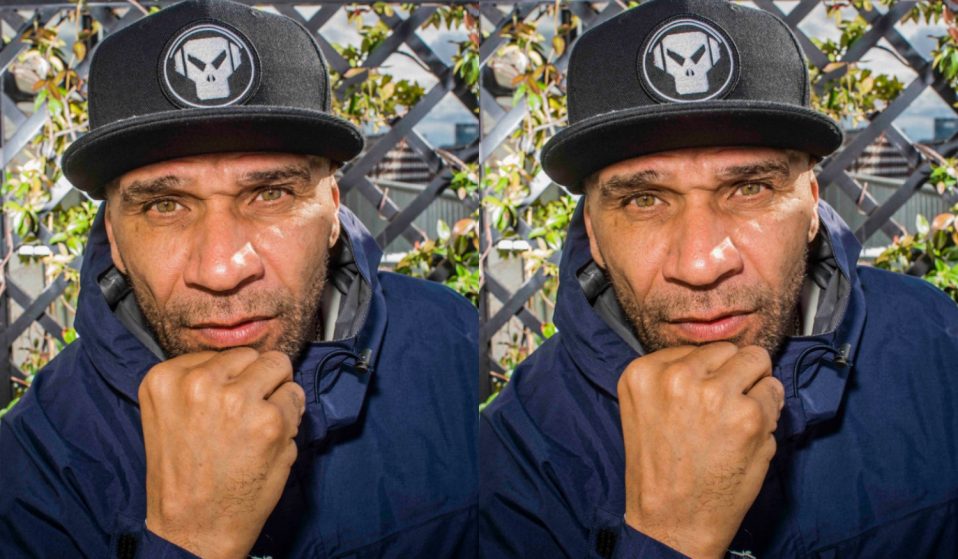 The drum and bass pioneer opens up about drugs, artistic recognition and his complex feelings towards Eric Clapton.

The drum and bass pioneer opens up about drugs, artistic recognition and his complex feelings towards Eric Clapton.

Goldie’s loquaciousness is a lot like the music he makes: fast, furious and combative. He’s articulate one minute, an articulated lorry the next, careening dangerously off the road – especially if you ask him a jarring question he doesn’t like. “That question is actually irrelevant to me and I don’t give a fuck!” he barks at me over the phone, as he speeds along the motorway. “That’s the kind of question where you’re loading the gun with polystyrene, sunshine!”

We’ve been talking about “Mother”, the ostentatious (and, some have said “pretentious”) hour-long operatic opener of Saturnz Return that explores his difficult relationship with the woman who brought him into the world and then put him up for foster care when he was three. It’s a visceral exploration of pain, with long gaps representing maternal longing almost played out in real-time.

As for the question, admittedly, it was a precarious one (and one I wouldn’t ask again given the opportunity). I’d wondered if, having come from a working-class environment, the people he grew up with might have thought an avant-garde exploration like “Mother” was getting ideas above its station. Goldie answers sarcastically for a testy few minutes, and I’m starting to fear the worst for the interview, but then we turn a corner when I ask him about art. Suddenly, he returns to his charming, engaging, entertaining self and the next 20 minutes are a joy.

Born Clifford Joseph Price in 1955, Goldie grew up on the mean streets of Wolverhampton and made a name for himself as a graffiti artist before he became the talisman of jungle, first as Rufige Kru and then under the nom-de-guerre Goldie. As well as a career in music, roles in Eastenders, a James Bond film, and a stint on the reality show Maestro helped make him a household name in the UK. He now lives in Thailand full time, where he underwent addiction therapy a few years ago, and then never left. He’s in the UK to promote the re-released Saturnz Return – an album which received a critical mauling on its release 21 years ago.

The story goes that everyone from his fans to his own record label expected another Timeless, his universally-lauded debut featuring hit songs like “Inner City Life”. What they got instead was over two-and-a-half hours of experimental music of a personal, cathartic nature (alongside bangers like“Digital” with KRS One).

Perhaps unsurprisingly, Saturnz Return actually sounds brave and bold and ahead of its time 21 years on. Warner Music now thinks so too, reissuing it with yet further extras to augment its already colossal mass. As rigid formats are swept away in the digital age, and bandwidth is no longer a problem for most people, tracks like “Mother” are far more likely to find an audience.

It received a lot of bad press at the time, but I listened to “Mother” last night and it’s actually very moving.
With art generally there are these disparities between the pop music industry as we know it, and popular music itself. Somewhere in between is the art. So let’s see if these records stand up in 20 years? “Low” by David Bowie still stands up for me, and so does “Mr Blue Sky” [by ELO]. So does Ed Sheeran in some respects. A good composition is a good composition.

I was with you on the first two…
Just as a question to you, why would you not think the latter? Do you not think Ed Sheeran is a great songwriter?

His music just doesn’t stick in my brain for some reason…
Yeah, Eric Clapton never stuck in my brain, know what I mean? You’ve just got to see it through the eyes of a different generation sometimes and, joking aside, at the end of the day, they’re some pretty good chord structures and I think ‘fucking hell, that’s pretty clever’.

I was in Eric Clapton’s fucking rehab place in Antigua. When I found out after three days I left immediately. Fact. ‘Please Eric, can you give me my money back, you shitface?’

When you make a song like “Mother”, does it have the cathartic effect you’re hoping for?
Yes, it very much had a cathartic effect because of all the looping. I’d habitually listen to the synth, for instance. There’s a 23-minute fucking synth guide. An hour-long track is a lot of hours of playback because it’s a big sculpture, so I would end up listening to just the synth track for days on end. Very therapeutic.

What was it like being mates with David Bowie?
Great. It’s a question that I get asked a lot. Great. Great relationship, good mentor, and that’s it really.

You made a very enjoyable programme on the Matisse Cut-Ups at the Tate Modern a few years ago for the BBC. I liked the way you threw yourself into it.
Thank you. The art changes, you know? You look at stuff you hated when you were a kid and it opens your eyes. Cut and paste was his great gift.

Is there any correlation between what Matisse was doing and what you do as a musician?
I think the only correlation really is that I was doing stuff with technology that wasn’t supposed to happen with it. “Mother” in particular featured two different sequencers made by two different companies that weren’t meant to be compatible – so it’s a correlation in pushing the boundaries of the concept, which I like. And what about today? Are we pushing the stuff to its limits? I think that’s what drum and bass music is actually. It pushed mundane samplers into areas they weren’t used to going, and that was inspired by hip hop with two decks looping two sounds together. And the sampler was created off the back of that!

There was a flurry of new genres at the turn of the century: drum and bass, UK garage, 2-step, broken beat… have we now reached the limits of digital capability?
[Laughs] No no, the capability will always be constant, those things will keep changing! I used to think “where can it go after DnB?” I guess in a certain respect we go beyond the genre, and that’s what “Mother” did. You can give a foundation course to an artist, but give them a can of paint and they’re going to find it very difficult to do a graffiti piece. You give a graffiti writer the tools and he’ll adapt to that environment a lot better, because he’s learned from the raw source. The only new thing was grime, which was from the street and voiced by the street. Graffiti will always be the daddy because it’s not something you can download.

Do you still do it?
Yeah course, I’m painting all the time in Asia. I pretty much paint all seasons. You never stop drawing outlines. I’m 54 now and I can still go and lay it down, it’s in my blood.

Is it annoying if you make a great piece of art in a public space and the council comes along and whitewashes it?
Haha, why are you asking this? We’ve already won! We’re already in the galleries. The barbarians from within have truly taken over. The thing that they chased us for, they’re now coveting in galleries, whether it’s fucking Banksy or it’s Mo2 One. Everything gets gentrified eventually, that’s capitalism. Grafitti, which was developed in the ’70s, has created a whole other fucking thing from advertising to people wearing baseball caps to the side, which is all part of the gentrification. It’s almost as if, were you to remove everything that was of urban origin from society, that it would be a very fucking bland journey to work. People forget how much we’ve influenced everything in that respect.

So you’re living in Thailand full time now?
Yeah, I love it. Nobody fucking knows me and I can get on with my life.

And you’re not subjected to the daily whims of Brexit…
Yeah, it’s inevitable that the country that took everyone out from the 14th century onwards would eventually be brought to its knees. Anyway, that’s a whole other fucking argument for another day.

Saturnz Return is out now.

Linkedin
RELATED ARTICLES
OTHER ARTICLES
The photographer describes taking inspiration from Magnum photographers to craft an intimate and revealing portrait of the city.
Photographer Nico Froehlich’s series documents South London’s diverse communities, while also reflecting on their fragility amid rapid gentrification.
This afternoon, workers of the hospitality chain came together to call for better pay and working conditions.
A campaign seeking to prevent future injustices where there is state involvement is gaining momentum, with Labour recently pledging its support.
As the cost of living crisis bites, letting go of treats to keep us going is proving difficult – but we should’t just blame ourselves for our financial worries.
Photographer Jeffrey Silverthorne always treated his subjects – often those living on the margins of society – with empathy and respect.