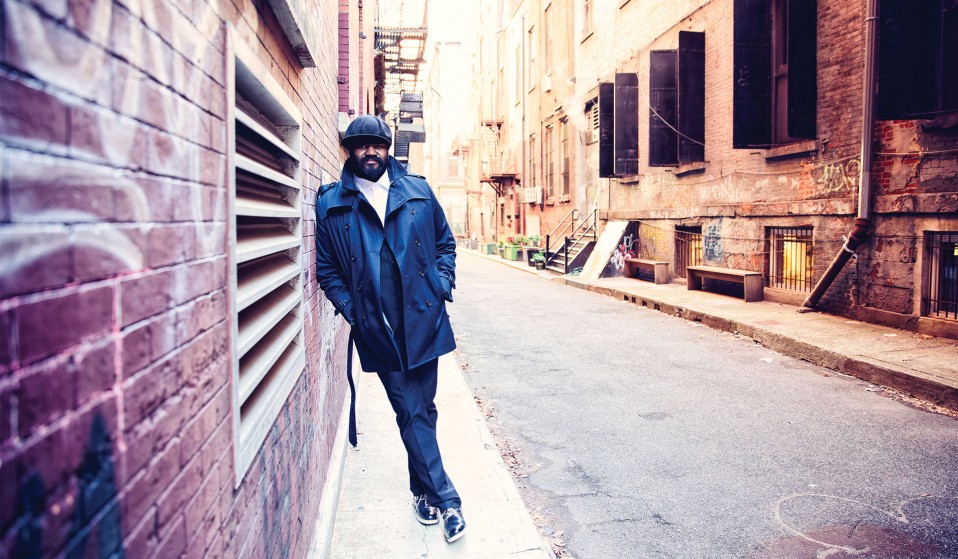 Breakout star Gregory Porter explains how jazz and soul’s history of protest informed his new album, Take Me To The Alley.

Breakout star Gregory Porter explains how jazz and soul’s history of protest informed his new album, Take Me To The Alley.

“Songs about romantic love are important but there’s also the love song for mankind,” Gregory Porter explains. “I’m not trying to beat anybody over the head with my thoughts. The protest in my music is subtle because I want people to take the song in and consider the ideas. But I hope songs about social change will come to the fore and get more of a spotlight.”

You might not expect such fighting words from a Grammy award-winner and million-album-selling artist, but Gregory Porter’s career has been one long battle to be heard. Born in Bakersfield, California he honed his craft over decades with little-to-no recognition in dark basement jazz clubs before recording his debut, the platinum Liquid Spirit at the ripe old age of 38.

He’s since performed at Glastonbury, guest-vocalled on Disclosure’s massive hit ‘Holding On’ and burst way beyond the small soul jazz scene which birthed him. Despite the widespread acclaim, there’s a burning social critique bubbling under the surface on many of his most powerful tracks, which is present too on his new second album Take Me to the Alley.

“If we’re true to ourselves as artists, we write about conditions that are around us. If things aren’t right, that’s something we have to talk about,” Porter says. One track that stood out on Liquid Spirit, ‘1960 What’ came from a really personal place, Porter explains. “My mother had just passed and I was reconnecting with her story growing up in the South,” he recalls. “I was listening to lots of Nina Simone, lots of soul music, deep blues and thinking about the LA riots, which had happened a few years before, and this recurring story of injustice. Similar things have happened at different points in our history. Whether it’s Martin Luther King, Rodney King or the shooting of any young person, it’s that feeling of injustice that sparks emotion – when people feel their rights aren’t being respected.”

The refrain in the chorus, ‘1960, what? 1960, who?’ refers to the numerous Civil Rights Leaders, such as Martin Luther King Jr. and Medgar Evers, and other figures whose tragic deaths lit the touch-paper for the many incidents of social unrest during the turbulent ‘60s. “I don’t say ‘1970, what?’ or ‘1980, what?’ but the timelessness of the song is implied, for when it happens in the next ten years,” Porter explains. “I hope it doesn’t, but it probably will. It’s a recurring story if we don’t learn from history.”

First aired in Harlem jazz clubs long before Porter’s record deal and the major mobilisation following the deaths of Michael Brown in Ferguson and Eric Garner in New York and the growth of the Black Lives Matter Movement, the song feels all the more poignant with each episode of injustice and reaction that hits the headlines.

Porter’s latest album Take Me To The Alley once again demonstrates his awesome voice, which always has a huge impact across the emotional spectrum, from agony to ecstasy. But when Porter chooses to speak out on society, like on the softly-spoken title track, he takes his lead from the greats of soul and jazz history. He looks back to Marvin Gaye, Nina Simone or John Coltrane, who stood at movements for change in their day.

“When you think about the best protest music, whether it’s Marvin Gaye’s ‘What’s Going On?’ or Bob Marley, it’s beautiful music which carries a deeper meaning to the people you’re singing about,” Porter says. “It’s not always overt: there are great protest songs where it actually took us a while to know they were protest songs. But a good protest song expresses the feeling of a situation to those people being subjected to certain conditions. Great hip hop, as an example, carries interesting self reflection and, almost like CNN or the BBC, reports and broadcasts what’s really happening on the streets, with the aspiration that hope will be coming their way.”

Gregory Porter’s Take Me To The Alley is out May 6. Catch him live at London’s Hammersmith Apollo on Thursday April 28. More European and US dates throughout 2016.

Linkedin
RELATED ARTICLES
OTHER ARTICLES
At his West Bank restaurant, Fadi Kattan established himself as the voice of modern Palestinian cuisine. Now, he’s bringing his innovative, bold flavours to the UK’s capital.
Photographer Becky Tyrell went down to the fading banger and stock raceway to meet a community desperate to keep it alive.
A new law change is enabling Britain’s donor-conceived children to know the truth about their origins – but campaigners say the fertility industry must do more to protect people.
The action took place in response to the 200 asylum-seeking children who were placed in hotels run by the Home Office who have gone missing.
A recent High Court ruling against the right to wild camp in Dartmoor National Park sparked the largest land protest in history – and campaigners say their fight is not over yet.
A new film from Berghaus traces the story of Adam Raja, who left behind a turbulent upbringing to discover the healing power of climbing.