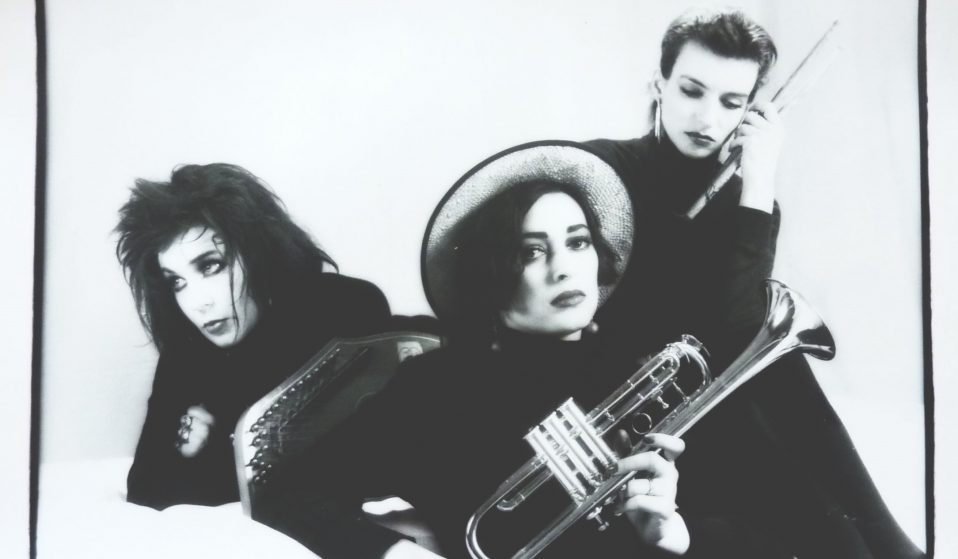 The musician, DJ and founder of Monika Enterprise reflects on a career defined by revolution and rule-breaking.

The musician, DJ and founder of Monika Enterprise reflects on a career defined by revolution and rule-breaking.

Gudrun Gut moved to West Berlin in 1975 and was immediately smitten. It was, as she describes it, the alluring smell of “coal and kebabs”. There was also the multicultural liveliness, an antidote to the orderliness of her life in Lower Saxony with its schlager and denialism, all driven by the Wirtschaftswunder.

The German musician remembers the many journeys she took and the passport stamps she accrued, making the strange journey to the “Island City” via the border at Helmstedt. “My passport was full of stamps from passing through every time, and you had to behave otherwise there could be problems – or maybe they wouldn’t let you through. It was really weird but we got used to it.”

Gut has been central to the alternative scene in Berlin since pretty much her arrival. She brought punk influences to the city in 1977 after spending a month in London. Along with the musician Bettina Köster, she opened a clothes shop called Eisengrau, which doubled up as a meeting place for musicians and artists in the early 1980s. She was a member of the first incarnation of Einstürzende Neubauten and counts Blixa Bargeld and Nick Cave as close friends. She has collaborated with the great and the good of Kosmische Musik and started her own label, Monika Enterprise, a record company that established itself as a great independent force, largely championing innovative female electronic musicians.

Furthermore, Gut played in three remarkable bands during the late 70s and 80s: Mania D, Malaria! and Matador. A new book, M_Dokumente, compiled with bandmates Köster and Beate Bartel, is a stunning visual document of that period. It also serves as an oral history, an essential testament to the diversity of the West Berlin scene at that time. As well as the book, a compilation called M_Sessions – Rare Originals, which features the three bands is now available, along with an additional album of brilliant reinterpretations called M_Sessions – Reworks – courtesy of contemporary artists such as Anika, Lucrecia Dalt and Midori Hirano.

To celebrate, Gut reflects on the lessons she learned along the way: from ripping up the rulebook, to seeing the potential in everything.

There are no rules

“My mother’s youth was lived through the war years, so afterwards, all these people who’d experienced the war wanted everything to be nice and cosy, and not talk about the bad things that had happened. The music was horrible, it was just schlager; nothing was experimental, everything had to be smooth, and we were really fed up with it. We wanted to break out and be real, because reality doesn’t only have a smooth side.

“West Berlin was very different. It was mostly made up of students and pensioners, and there was a big intake of people who didn’t want to go into the army because you couldn’t be conscripted if you lived in West Berlin. There was no real economy in Berlin, and we became very political. There were lots of discussions, and lots of ways of testing out a new society; people were living in big communes and sharing sex, and discussing what roles males and females should take – who does the dishes, etcetera. There were lots of demonstrations, and it was super exciting for me to experience all that.

“There was a rupture with the past, and there was only this American tradition, blues and so on, and we didn’t really have anything to draw upon since the Golden ’20s. So we were fascinated with that Weimar period, when lots of things were tried out culturally. And then it was cut short by the Nazis. The culture didn’t develop, and then after the war, we only had schlager because people wanted to feel good. We explored a little bit of Stockhausen, then Can, Neu! Cluster, but nobody really knew about it. Thankfully people like Brian Eno and David Bowie helped to make it more widely known. These were the only artists we could look up to, and so we just did whatever we wanted to do. There are no rules, we’d just play what came out of us. And with the geniale dilletanten scene, we would play instruments we didn’t know how to play, because we wanted to create something new. Perhaps that Dadaist urge had something to do with our art school backgrounds.” 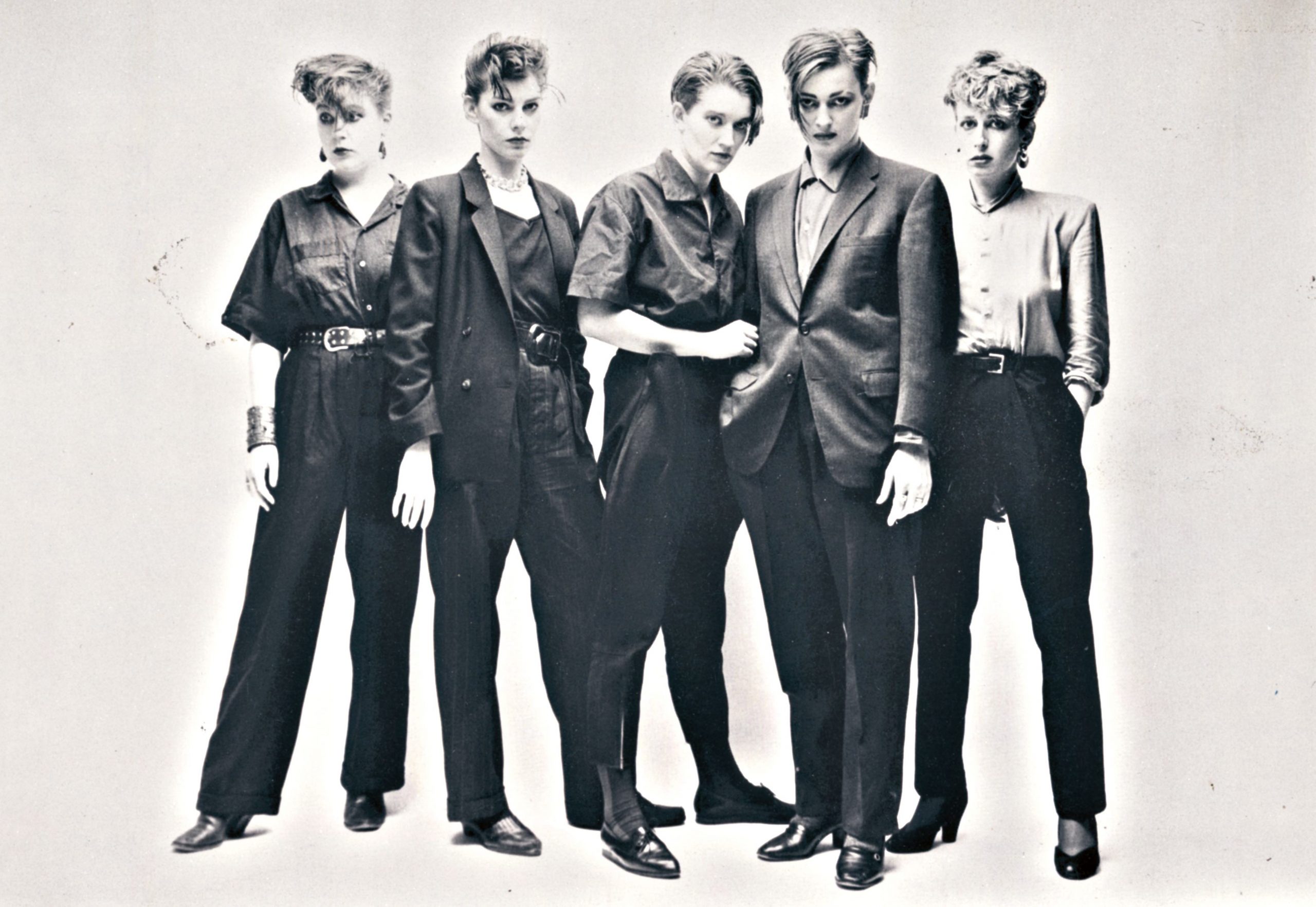 “We were surrounded by the wall for so much of the time, but now I can go to the umland. The umland is the outskirts of the city where there’s nature, especially in the old east. It took me 10 years to see beyond the Wall after it fell, because I still had this wall in my head. And then I realised, ‘Oh, there’s countryside right next to it’. Because before we went to other countries, but we never experienced the exteriors of the east. And now I really like it!

“I never expected the Wall to come down. I never imagined it would happen, and I totally understood the idea that East Berliners would kind of build their own thing – I was fascinated by that, but the way the West took over the East wasn’t cool. I remember I went on this demonstration where the Chancellor Helmut Kohl was doing a talk about reunification. He was a silly old guy, and he was talking about how everything would be equal in two years. I knew that was impossible so I started to boo. And people wanted to hit me. I had to hide, because people didn’t want criticism, they were desperate, they wanted to hear it. It didn’t work out well but now things are slowly improving. There’s a lot of far-right support in the east, though a lot of that is because they were left behind.”

“We were already doing Mania D when Blixa [Bargeld] asked me and Beata [Bartel] to join Neubauten. We rehearsed in his cellar, because he really wanted to have a band. Blixa had the band’s first gig lined up at The Moon [in 1981] where I think Mania D also played as well. And he asked us to join, so we had a little rehearsal and we did it. They had super 8 movies projected on the walls and we played music along to them. We had themes for five of the projections, and I think we more or less improvised the whole thing. I was playing a Korg synthesiser, and I had little settings for each track but, you know, little things are always changing with a Korg so it sounded totally different to what we’d planned. But for an experimental filmmaking and noise kind of spectacle, it was fun actually.”

“Years later, the most inspiring thing was working with Faust’s Hans Joachim Irmler [in 2014], because at that time, I’d turned my back on improv, and was much more into song structures. But I thought, why do I hate improv so much now, because we used to improvise a lot in Mania D. Irmler is an improv guy, so I thought I should go back there and check it out again and see why I didn’t like it. And of course, Irmler is a master of improv, and he’s a keyboard guy and I’m more of a drum girl, so that worked well. It was very interesting, and since I worked with him I do lots more improvisation with Monika Werkstatt. It offers the biggest freedom and excitement and I realised I like it very much! I learn a lot from my mistakes, and I never regret anything. Use your mistakes and turn them around and rearrange them, and then they’re not mistakes anymore. I’m not a jazz person but the idea of jazz is fantastic.”

“In a band or a community, if you really listen then you can see the potential in everybody. And if everybody is free, it’s much better creatively. For me there has to be this openness for the creative process to work. We always supported each other very strongly when we played live. We had a plan. We just ignored the sexism; people shouting, ‘Nazi whores.’ Or the time someone pushed a note under my hotel door, saying: ‘I want to have a baby with you’. Fuck you! That was going too far.

Being in bands solely with women was something that just happened because it felt more comfortable. We had experiences with mixed bands, and there were usually power issues. Being in the music business for a while – you realise it’s a business run by men. It started to become annoying, so that’s why I started Monika Enterprise. When I founded the label in 1997, they said: ‘You have to find a niche.’ I thought, I know a niche: female labour; because I looked at all the other record companies, the indie labels, and all their signings were male. So my idea was that the future would be equal. When you’re young, you have this idea of the future, it will be like this, everybody will be equal, male and female. But the reality didn’t turn out like that. The fight continues.”

Linkedin
RELATED ARTICLES
OTHER ARTICLES
The author discusses her blistering new novel about history, revolution and queer love.
Over the weekend, London locals came together to resist a pre-planned police raid targeting delivery drivers.
Members of the collective share some of their reasons to run as part of #UnitedBySummits, a campaign that looks to uncover transformative power of the outdoors.
The situation in Afghanistan remains dire, with many groups facing persecution at the hands of the Taliban.
The government’s failure to take long Covid seriously has led to the formation of a group campaigning for the thousands of forgotten victims of the illness.
The revered showbiz chronicler recalls his journalistic beginnings, documenting subcultural scraps in the ’80s.