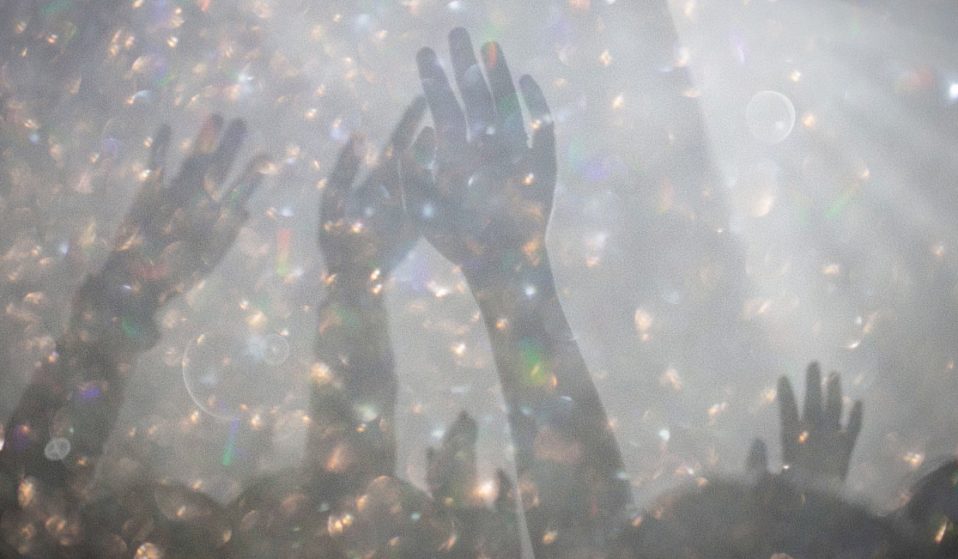 Some ardent ravers view the practice as a vessel to connect with something larger than themselves. But can a night at Berghain ever result in genuine transcendence?

Some ardent ravers view the practice as a vessel to connect with something larger than themselves. But can a night at Berghain ever result in genuine transcendence – or are efforts to link modern raving with ancient ritualism way off the mark?

It’s a typical Sunday in Berghain, the world-famous Berlin club.

A thudding bassline reverberates through warm bodies, giving off an energy that climbs walls and tickles the skin. Meanwhile, fractal lights breathe and twist in time with pulsating beats. For those present, it feels like more than just hedonism: it’s an opportunity to connect with something larger than yourself.

“There are these moments when the track tells a story and captivates me completely, taking me on a journey when I feel weightless, just about to enter outer space,” says Günther Anton Krabbenhöft, a frequent visitor. “I don’t really want to say it – but it sometimes feels like an orgasm. It’s truly something special.”

At 75 years of age, Krabbenhöftis one of the techno temple’s oldest regulars. But swaddled amid the scurry of scantily-clad ravers, he says he feels closer to 30. “When [I’m dancing], I’m not the older gentleman – I am time and weightless. There’s a connection, an energy with the people surrounding me.”

Amid growing existential crises across the world, a simplistic reading could dismiss raving as a means to temporarily escape. But by another more generous interpretation, raving, and the drug-taking that often accompanies it, is the manifestation of a deep human intuition that there is something greater out there. Are people like Günther in on a secret?

Referring to a Sunday trip to Berghain as ‘going to church’ could be seen as nothing more than a Berlin stereotype, but it’s a comparison that doesn’t go unwarranted. Elements and combinations of sensory deprivation or overload – breathwork, dance, meditation, sex, fasting, substance use – have been documented by anthropologists as a way of achieving higher states of consciousness in a number of sacred cultures: from the ancient Greeks to pagans, Christian Pentecostalists, shamanic communities and countless others.

Raving, and the technological developments that have catalysed the production of electronic music, have thrown humans into parallels that had previously only been present in niche spiritual rituals. “Like [many ancient spiritual practices] rave has this idea of ordeal built into it,” says Eris Drew, a DJ based out of Chicago.

In many of the documented examples of ecstatic rituals, the idea of suffering and discomfort is explored as a means to break down inner barriers and achieve altered states of perception to bring humans closer to a universal and invisible energy. For Drew, the parallels are clear.

“During [raves] you’re disrupting your sleep cycle, you’re not sleeping at normal hours, you’re typically not eating the way you’d normally eat, a lot of people do a lot of intoxicants, which is not necessarily an ordeal but the way most modern people do it involves dehydration and poly-intoxication, and an intense physical experience of dancing for 8 hours at a time,” she adds.

“A self-care model would say that we shouldn’t listen to loud music, but sometimes you have to do something that’s not good for your body but good for your soul. For people who love raving, it seems to be like that for them.”

Berliners will wake up at 5am to go to Berghain’s Sunday Klubnacht. Over in rural France attendees at Dharma Techno’s retreat are waking up at the same ungodly hour, but for a different reason: to meditate.

Following three days of silence, music begins to pulse out of the meditation hall, engulfing the room. Slowly, Dharma Techno’s musician begins to play nature-based sounds, replacing separate parts by percussive elements, until the music mutates into techno. It’s then played for around seven hours to an intimate crew of 30 meditators.

“Dancing in front of techno was the moment I always looked for – I looked for that feeling of being connected when the music is holding the space,” says Debbie Griffith, manager at Dharma Techno. “It’s the trance factor, isn’t it? It’s got the rhythmic beat as the grounding element and the psychedelic sounds that can take your mind off to another dimension while still being grounded in the groove.”

Griffith was a co-founder of  Spiral Tribe, one of the UK’s most prolific free party sound systems during the late ’80s and early ’90s. Now, as part of Dharma Techno, she hosts these meditation retreats twice per year, as well as a larger 300-plus drugs and alcohol-free festival.

“People are bored of getting wasted, they’re looking for something more healthy that they can incorporate into daily life and not fuck their week up,” she says. Before Dharma Techno existed, Debbie struggled to figure out a way to build a bridge between the realms of techno and meditation. “Incorporating this music with the silence is a very strange concept. I wouldn’t have believed it until we tried it, but it works.”

Debbie’s relationship with clubbing and the confusion that ravers faced after the initial rave explosion ended echoes a similar backstory to Drew. In the aftermath of the ’90s clubbing boom, some of Drew’s friends joined cults, while others exited the scene with serious addiction problems. Drew herself spent years struggling with challenges related to her gender and sexuality.

“I went to school and got a straight job and tried to live a regular bourgeois existence as an American middle-class person in the midwest,” she says. “There was no reintegration mechanism for rave. We had these crazy experiences in the early ’90s and then the scene dissolved around us. Within a few years there was no place for us to go.”

The supreme intensity of these earlier experiences with raving planted strong convictions in both Debbie and Drew about the healing power of dance music, as well as its capacity to remedy inner wounds. But Aisha Devi, a Swiss-born Tibetan DJ and self-described modern shaman, believes this as strongly as anyone.

“Mantras and repetitive patterns are not ornamental,” she says. “The repetition will act as a hypnosis process on the brain, the essential frequencies of the words and of an instrumental loop can morph reality, dismantle our perception of spacetime and cure bodies and minds.”

In-keeping with that philosophy, Devi’s live sets make use of mantras and intricate voice work, layered over electronic beats. “Shamans from all over the world have been using these techniques since ages. The effect of the voice is the most powerful, its vibrato that deeply resonates in our bones and aqueous components can heal us.”

The resurgence of ritualism through raving, intentional or not, begs the question: should DJs, then, be considered modern shamans? In Devi’s opinion, committing to excavating ancient human knowledge and transmitting that power to others through sound is what separates a shamanic DJ from a regular one.

“We live in a hyper-materialist matter-fetishising society where people feel they are missing something,” she says. “Our death is problematic, but some tones have the ability to reveal our non-physical existence and awake our supra consciousness which is the immortal form and infinite plasticity of our brain. I make music to put people in a higher state of consciousness, I produce this specific music to make them experience and integrate their own immortality.”

Like Devi, Drew also emphasises that education and intention is paramount for respecting cultural practices and avoiding appropriation. Her infamous Motherbeat parties that take place over Berlin, Pittsburgh and Chicago were conceptualised with the intention to create a safe space for people to explore their own consciousness and transcendence; in line with what Drew has learned about ecstatic rituals from other cultures, intentionality with regards to substance use is encouraged.

At the end of each party, drone music is played: a warm digestif for the spiritual and psychedelic-friendly ambient of the party. But Drew said she draws the line at the playing of indigenous instruments. “Technology has provided us a new way to make music that is quite democratising and I do think that ecstatic rituals belong to humanity. While evoking the idea of shamanism makes sense in some ways because [rave] is connected to ecstatic rituals, in a colonised world we have to be aware of [appropriation].”

Whether or not ravers are conscious of the ways their behaviour mimics ancient ritualism, for people like Günther Anton Krabbenhöft, these powerful moments, where the music can be felt within our very bones, point to a mystery of the human condition which we still have limitations to express in words or scientific concepts. The transcendence demands to be felt in order to be understood: once it is, it’s a magic that ravers seek to repeat over and again and again.

“When I walk up the stairs in Berghain and I start hearing the bass, I am excited like a kid under the Christmas tree,” Krabbenhöft says. “I think to myself, ‘’Wow, soon it begins!’”

Linkedin
RELATED ARTICLES
OTHER ARTICLES
For decades, an area of East London has served as a community hub for Vietnamese people looking for a taste of home.
50 years since its inception, and the campaign calling for recognition that capitalism depends on domestic labour is as pertinent as ever.
The last few years have seen an increase in LGBTQ-led initiatives to feed the hungry, with many finding ways to stay afloat despite the challenges.
LGBTQ+ students are keeping the spirit of the original Pride alive by fighting for liberation for everyone, not just their community.
The author discusses the all-consuming nature of heartbreak, and turning the experience into an incisive exploration of love and loss.
Thomas Hoepker‘s images taken during a road trip across America provide a searing social commentary about a divided country.