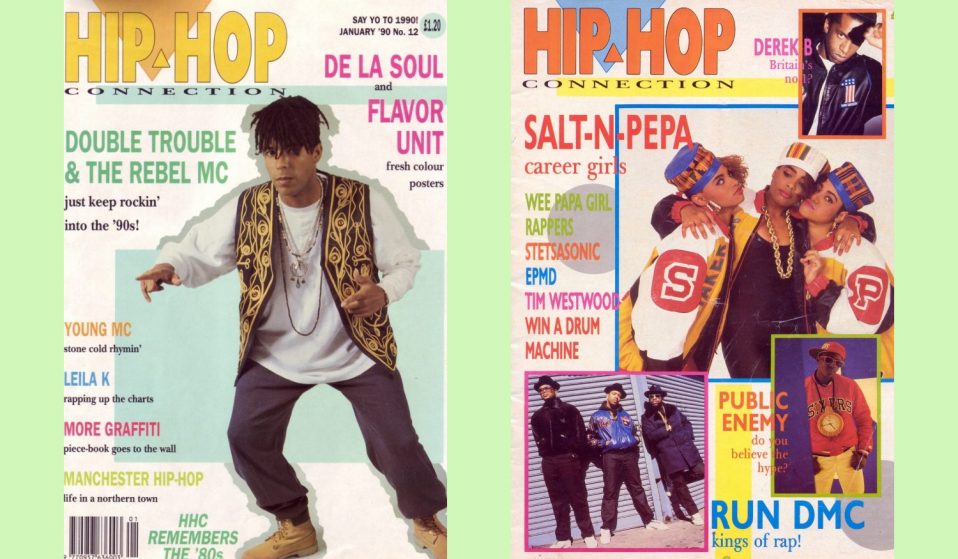 Hip Hop Connection, which ran from 1988 to 2009, gave MCs in the UK a platform to discover their voice.

Hip Hop Connection, which ran from 1988 to 2009, gave MCs in the UK a platform to discover their voice.

This year marks 10 years since Hip Hop Connection published its final issue. The UK magazine ran from 1988 to 2009, and in that time it became a major player in the rap world. It was the longest-running monthly periodical devoted entirely to hip hop culture, earning universal recognition and going toe to toe with larger US publications like The Source, Vibe and XXL.

HHC began its rise to prominence in the late 1980s, at a time when hip hop was seen by a majority of the music press as a soon-to-be-forgotten trend. “Rap was very much seen as a passing fad,” remembers HHC journalist Vie Marshall. “There was a very ‘white supremacist’ attitude from the other music press, and even the record companies. I don’t mean burning crosses and white sheets, obviously – we’re talking about Britain, not America. It was more the attitude that their music and their journalism was better and mattered, and ours didn’t.”

HHC‘s founding editor Chris Hunt had been working in the publishing industry for some time, coasting through the ’80s as a freelance journalist and eventually the editor of heavy metal magazine Solid Rock. His plan was to create a hip hop version of Smash Hits, using the brief commercial success of groups like Run DMC, Beastie Boys and Tone Loc as a springboard to bounce the magazine into the limelight and into the bedrooms of teenagers all over the UK.

It wasn’t until Hunt met Andy Cowan in 1989 – an aspiring music journalist and avid creator of music fanzines – that the magazine really began to develop a unique identity.  “We really were sailing totally unchartered waters,” says Cowan. “It wasn’t quite a case of making it up as we went along as it was a protracted case of trial and error: seeing what works and what doesn’t, relying on readers’ feedback to make improvements. We were lucky: from the very first issue onwards we had a fiercely committed and partisan readership who really knew their stuff and would take us to task if anything didn’t quite ring true.” 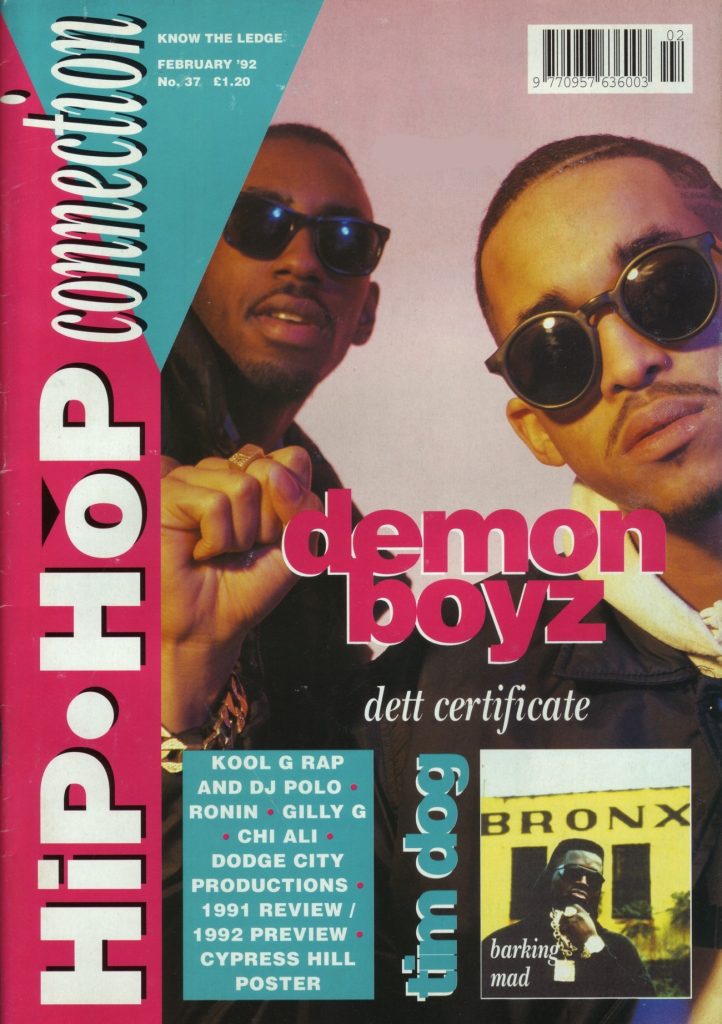 As the magazine found its feet, so did the fledgeling hip hop scene in the UK. MCs began spitting lyrics in thick London accents and become increasingly conscious of not imitating what was happening across the pond. HHC, therefore, became an essential guide for the promotion and also the navigation of the flourishing UK hip hop scene, helping build the profiles of acts like Rodney P, Blak Twang, The Brotherhood, Silver Bullet and Gunshot.

“Hip Hop Connection was really important,” remembers Rodney P. “It was a magazine that felt ‘for us by us’.”

As well as supporting the careers of UK hip hop acts, HHC acted as a platform for journalists and photographers to hone their craft and develop their careers. One of them was Normski, a rapper and photographer who was involved from the magazine’s inception, and went on and have a successful career as a TV presenter.

“When I first started to shoot I dreamt of seeing my work on record sleeves and in the press,” he says. “What made HHC so special was that, from the very beginning, I was given a major platform to show an audience their favourite artists – artists that often didn’t have a place on the shelves – and represent them in a true light.”

“To this day, many people have told me they’ve grown up with my photographs. To hear these sorts of compliments is truly amazing.” 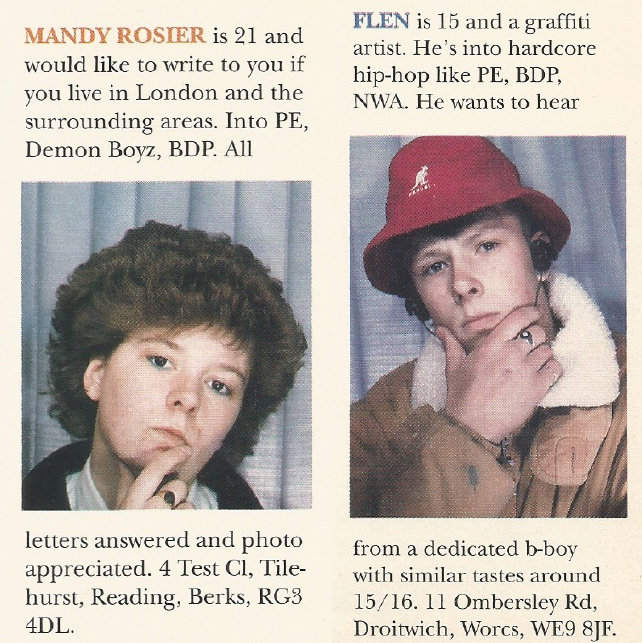 In the late ’80s and early ’90s, music journalism in the UK was very white and very male. That, combined with the macho world of hip hop, made it challenging for women journalists to establish themselves in the world of rap journalism. Vie Marshall was one of the few who endured, becoming one of the stand-out writers in the early issues of HHC.

“As so-called gangsta rap emerged, it became more important to me to criticise misogynist lyrics, female objectification and macho toxicity,” Vie explains. “A year after, Monie Love and Queen Latifah’s ‘Ladies First’ came out, I wrote a big feature on female rappers for HHC. Apparently, it was printed in the order it fell on the floor from the fax machine (that’s how long ago we’re talking). I kicked off about that, because I always number my papers and I felt it was an article worth getting right.”

However, it wasn’t all bad: “There were some beautifully respectful males who were very protective and brotherly towards me, such as a pre-big fame DJ Premier, who insisted on going an hour out of his way to escort me home on the subway in New York, when I was working out there.”

HHC established itself as one of the most eminent rap monthlies in the world, and as a result, was the catalyst for a whole new sub-industry of UK hip hop magazines. From the late ’90s to early ’00s, the country produced a host of hip hop publications that would for a time enjoy a flourishing existence. DJ Yoda – who edited and wrote for HHC – went on to be a part of Fat Lace, a tongue-in-cheek hip hop magazine that was released sporadically in the early ’00s.

“Fat Lace was a chance to engage with hip hop culture on a satirical level,” he says. “We were all such huge fans, and had grown up with the music – it’s a very British response to take the piss out of something you love. It was great fun to make, and even funnier to read. Look at something like Have I Got News For You – it was the hip-hop version of that.”

In a time pre-internet and social-media, these magazines were vital to the UK’s hip hop scene. In the early days, rap fans would leave classifieds ads in the back pages of HHC to meet like-minded individuals (for example: “Flen is 15 and a graffiti artist. He’s into hardcore hip hop like PE, BDP and NWA. He wants to hear from dedicated b-boys with similar tastes”). 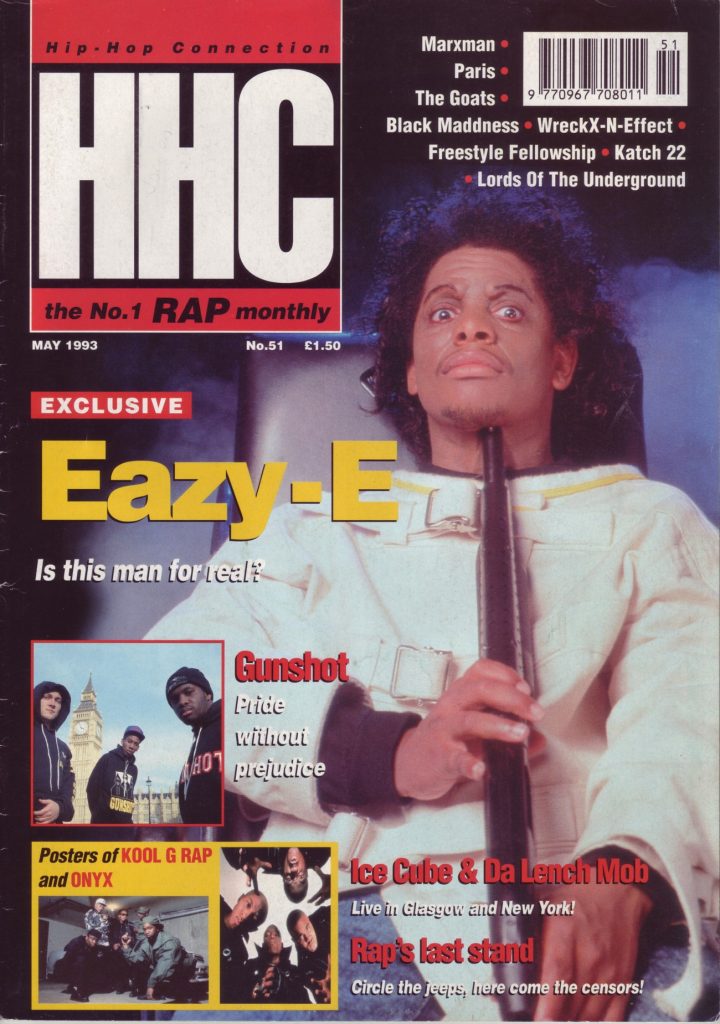 The magazines were the cement that held the scene together locally, but also the tool used to connect people around the globe. “You could go to Paris to the Champs-Élysées and you’d see HHC,” rapper Blak Twang tells me. “We didn’t have the internet and social media so people would read about you in these magazines and then seek out your material. These magazines were definitely a huge factor in what we did.”

“For example, in 1999 I had a band from Germany called Dynamite Deluxe come up to London to look for me. They had just been signed to EMI and were massive fans of my music. They had read about me in HHC.”

Unfortunately, with the dawn of the internet, magazines like HHC struggled to survive and became massive labours of love for all those involved. “In the early ’00s, I had to re-mortgage my house twice to keep it going,” says Cowan, mournfully. “I’m still actively paying for it, even now! Yet the millions of memories I have more than compensate, even though everything always used to run late and I spent far too many nights circling Kings Cross because I had missed the last train home.”

The UK hip hop magazine died an untimely death but the impact they had on shaping and nurturing UK music, as we know it now, is undeniable. Magazines like HHC were instrumental in the careers of pretty much every rapper from the UK for a time, and in turn, paved the way for a new generation of MC.

When asked if the scene could’ve survived without such publications, Rodney P stresses that “it wouldn’t have, full stop!”

“It really helped take the scene and these small pockets of people all over the place and connect them up and then push them out into the world,” he adds. “You see now the lack of magazines like HHC because the underground is really struggling. Hip hop as a culture – in the style that I love and I appreciate – would not get the spotlight now, and it would be magazines like HHC that would’ve given it that light and taken it seriously and helped to promote it in a positive way. The culture that I come from has been sidelined for the gloss.” 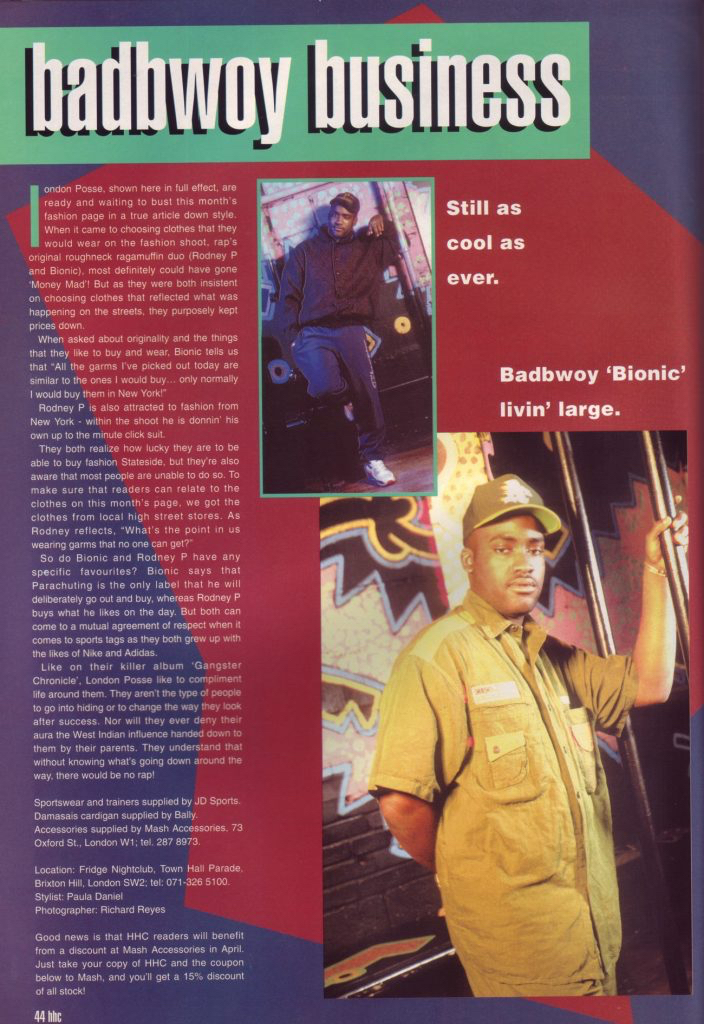 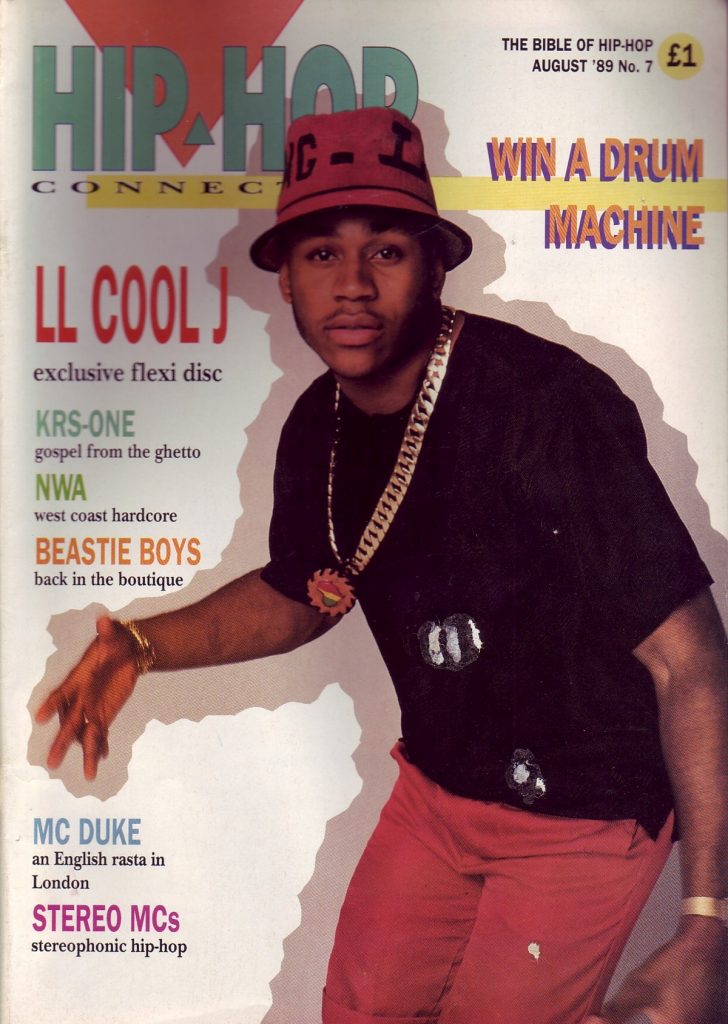 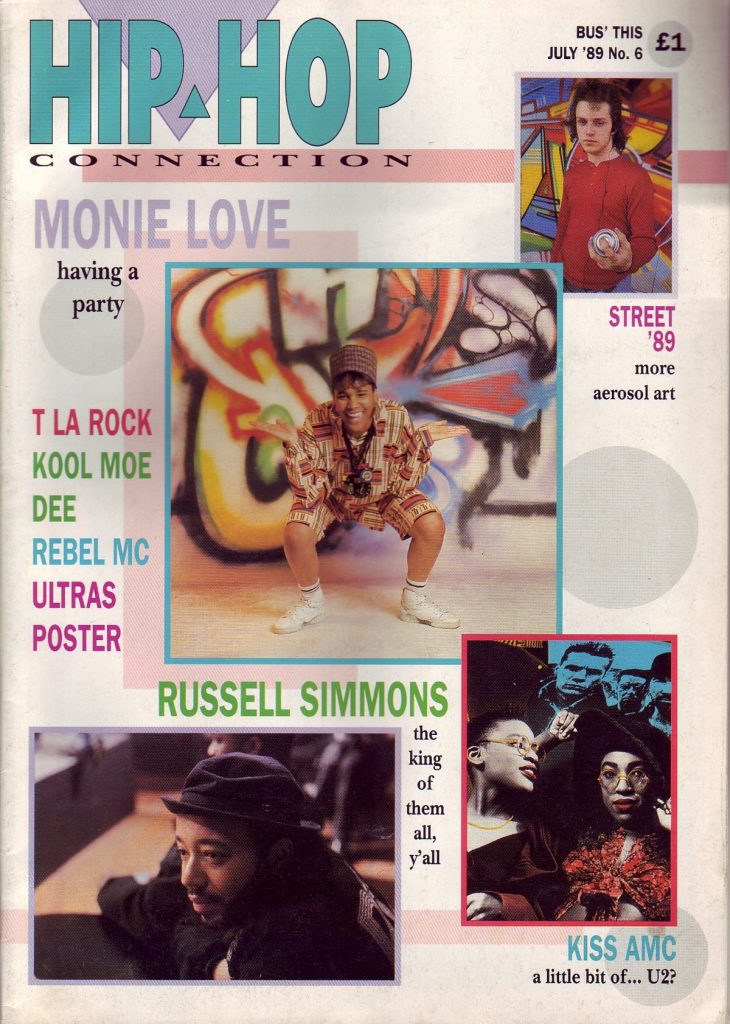 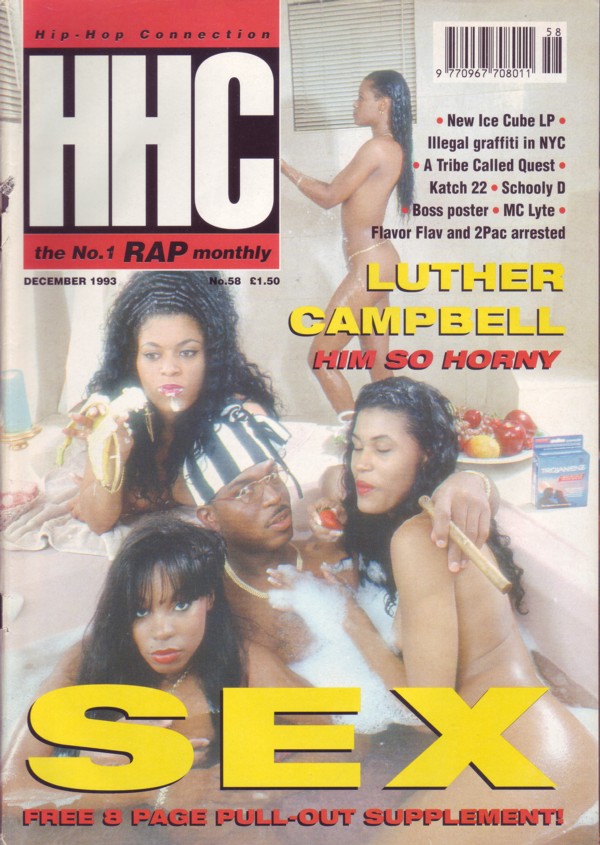 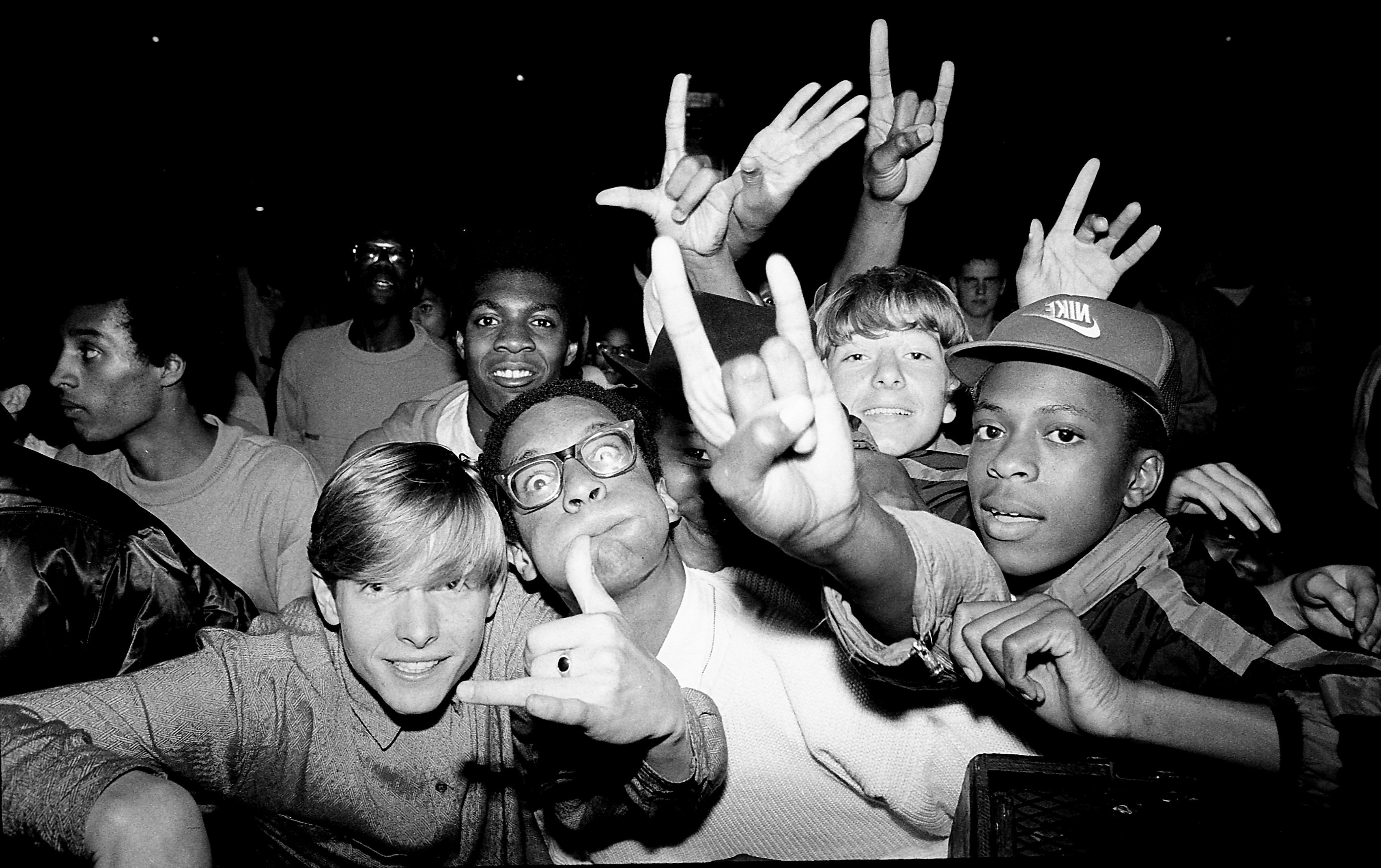 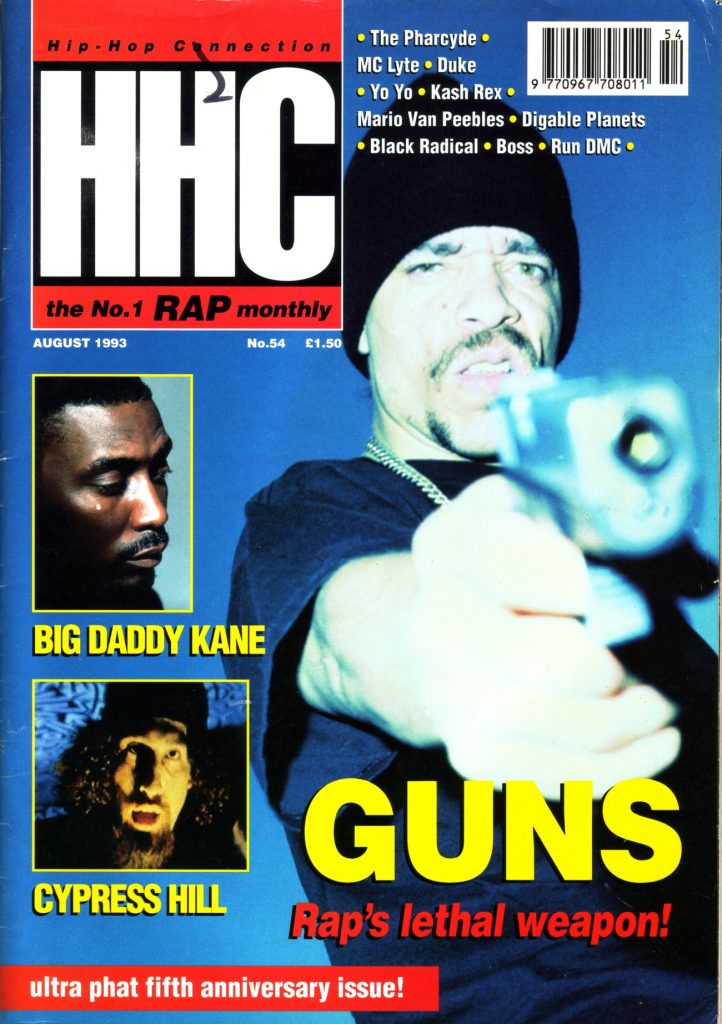 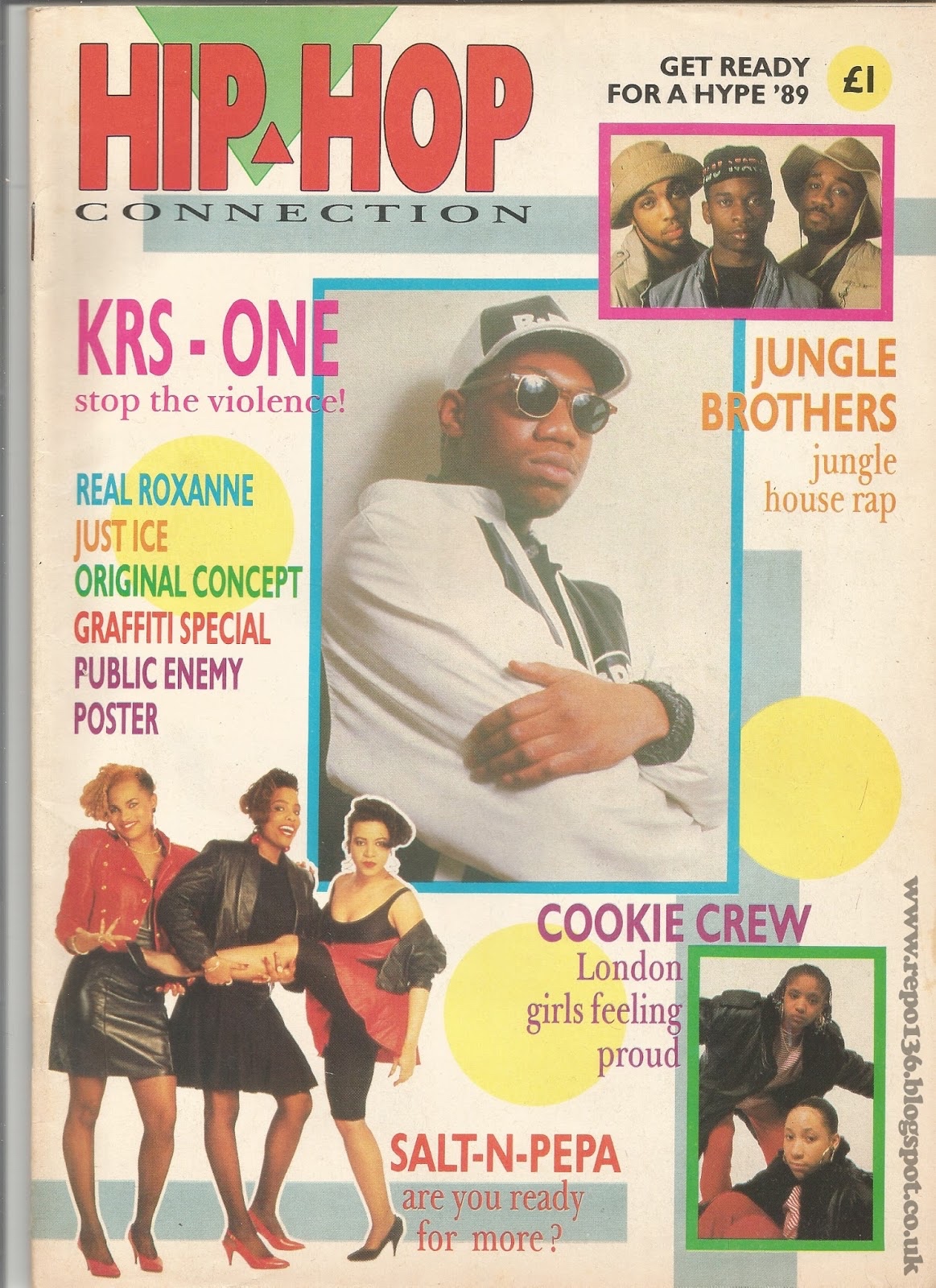 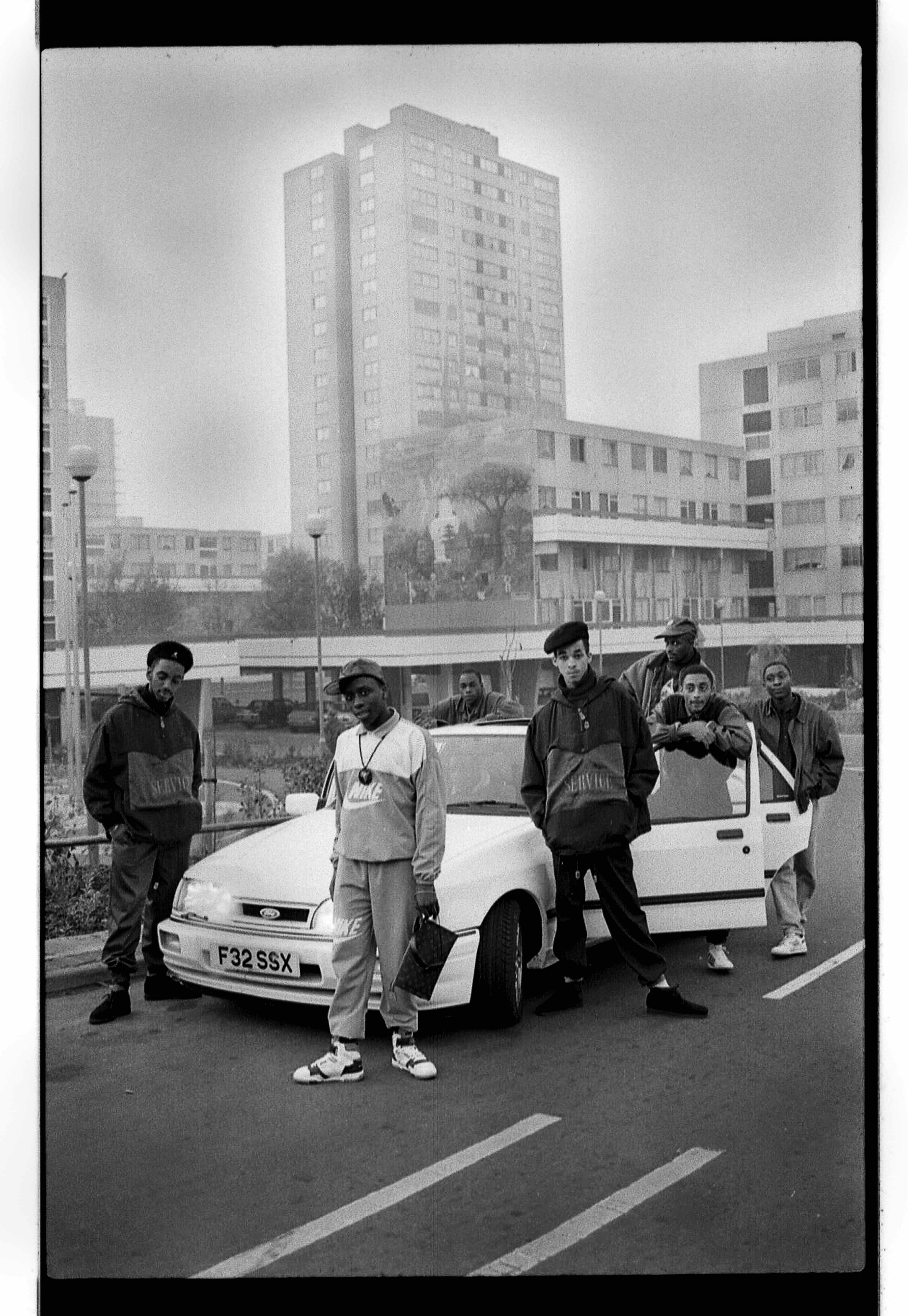 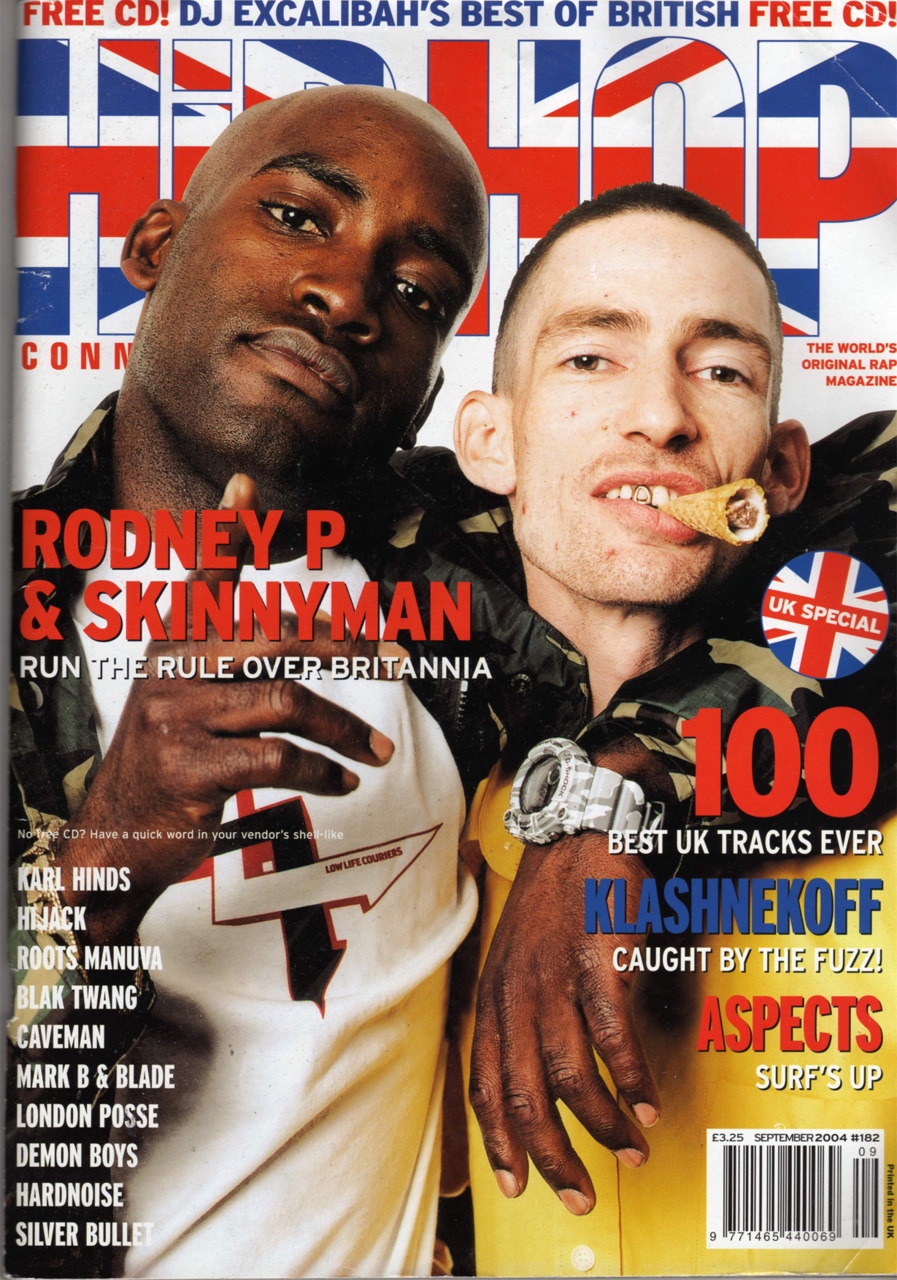 Linkedin
RELATED ARTICLES
OTHER ARTICLES
In the latest OFFF Dispatch, the enigmatic designer dives into his process, connecting the dots between his unique and varied creative output.
In her new book, the author gives a blistering account of the horrifying North African refugee crisis.
While protests over abortion rights rage in the US, access to abortion services is still almost nonexistent in parts of the UK.
The author discusses her blistering new novel about history, revolution and queer love.
To mark the anniversary of the mass trespass of Kinder Scout, a group of hikers came together with the intent of creating a new, fully inclusive culture for rural spaces.
The government is scrapping the Human Rights Act in a move that will hit marginalised people hardest.