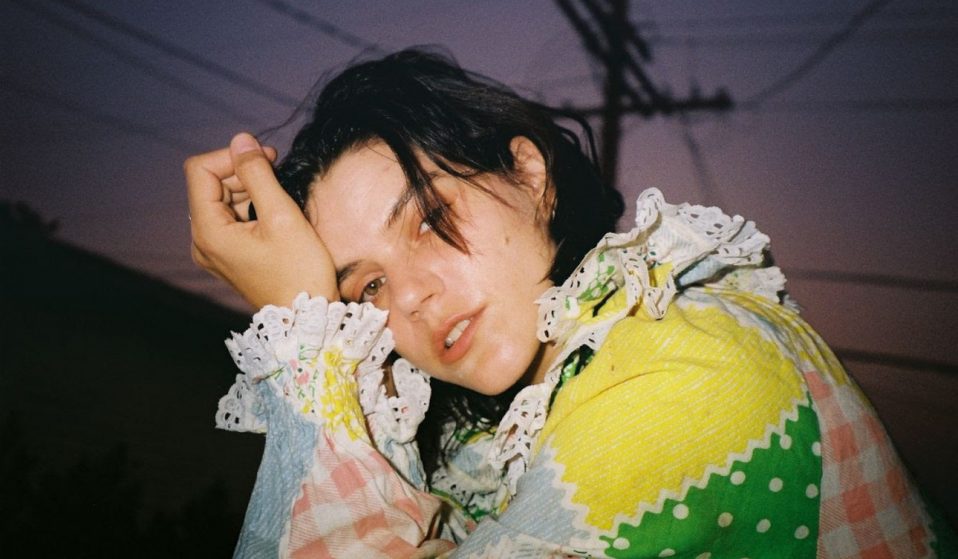 After a prolonged period of isolation, therapy and introspection, the French singer and actress returns with her hotly anticipated third album.

After a prolonged period of isolation, therapy and introspection, the French singer and actress returns with her hotly anticipated third album.

Soko doesn’t bring out many albums, but when she does, they’re always remarkably good. Stéphanie Sokolinski – to give her her full name – is also an in-demand César-nominated actress and now mother, which goes some way to explaining the infrequency of her musical output.

The LA-based French singer recorded her latest album, Feel Feelings, in 2016 in New York. Looking after her son Indigo Blue has delayed the release of the album a few years, and it’s been deferred a few further months because of the COVID-19 pandemic. When I call her, it’s a few days before LA goes into full lockdown, and six days before Boris Johnson announces the same measures for the UK; though the interviewer and interviewee are already self-isolating.

Born in Bordeaux in 1985, Soko moved to Paris at the age of 16 to pursue her dreams of acting and singing. Her filmography to date includes Bye Bye Blondie alongside Emmanuelle Béart and Béatrice Dalle, and 2016’s The Dancer, which she received her second César nomination for. As for her musical career, Soko released her debut single “I’ll Kill Her” in 2007, which troubled the upper reaches of the Danish and Belgian charts. It was a full five years until her debut album I Thought I Was An Alien landed, a record that explores depression, mental health and self-mutilation. 2015’s Ross Robinson-produced My Dreams Dictate My Reality is a melodic goth-pop followup that channels The Cure and features Ariel Pink.

Feel Feelings arrives five years later still, and it has certainly been worth the wait. The album’s floaty, touchy-feely textures make it a sensual listening experience, though she wrote and recorded the whole thing during a prolonged and enforced period of celibacy. Its initiation followed a high profile relationship with Kristen Stewart, a period of her life she’d rather not talk about, but which inspired many of the songs on the album. “There’s a lot of that on the record and that was my therapy,” is all she’ll say. A different kind of therapy, the Hoffman Process, also informs the album – a weeklong, micro-psychoanalytic retreat she is more than happy to talk about.

Hi Soko, how are you coping in these strange times?
Soko: We’re doing fine. We’re doing a self-imposed quarantine like all reasonable people in the US, because [at the time of writing] it hasn’t been announced by the government everybody has to. Thank God a lot of reasonable people have taken it upon themselves to do so.

The less reasonable people have been queueing up panic buying guns.
Soko: I know. Crazy times!

Your albums come out sporadically. Why do you leave such a gap between releases?
Soko: Yeah, I do a lot of things so it’s hard to split my time between them, including acting and music. I need to find a balance that works for me that is a mix of being in isolation and writing songs, and also doing projects with people I love and admire in a team, and serve someone else’s stories instead of mine. So that means I focus a lot on music, then I do movies, movies, movies. And then focus back on the music again.

In a sense you did a form of self-isolation for this record, didn’t you?
Soko: I did – I mean I went to New York because I didn’t want to be in my own environment. I also went celibate for the whole time I recorded it, so that I could really, truly, wholeheartedly dedicate myself to this record and not have any distractions. And I was working with a bunch of friends who were always dropping by the studio. It was kind of the easiest record to do, but also took the longest time. Then I got pregnant and wanted to be a mum, and for the first time in my life take some time off.

Some of those songs are sexy, like “Oh, To Be A Rainbow”. Were you sublimating those feelings into the music?
Soko: Yeah, definitely. I was either thinking about past relationships and how I was fantasizing something healthy that wasn’t; or thinking about what comes after all of these things that weren’t healthy. How do I find myself in a healthy relationship? It’s all about slowing down, which I feel this record taught me. All of the tempos are a lot slower than before and I wanted it to be more intimate and have groovy, sexy basslines and dry drums and a spoken word kind of thing.

And then things changed for you?
Soko: I think it made me want to settle and finally have a house and stop travelling all the time. And since finishing the record I got pregnant and now I live with my baby and my girlfriend and that’s really all I wanted the whole time I was making this.

You also underwent some therapy; specifically the Hoffman Process. What is that?
Soko: Hoffman is amazing. It’s a week of intensive therapy. I love therapy so much but it’s difficult to find the time to do it. So I had some time for once in my life and I wanted to take that time to focus on my mental health. It’s so important in our daily life: we say eating healthily and doing exercise is important, but also taking care of your mental health, meditating and talking about your feelings and where you’re at with yourself is also incredibly important. So every now and then taking that time to retreat is fundamental and vital to me. If everyone in the world would take time to look within and dig deeper into where their fears come from then we would live in a much better place.

What’s the best thing about it?
Soko: The best thing about Hoffman really is making you realise that you can change your reaction to things if you figure out where they come from. They give you a list of words to describe your feelings and you can’t just say ‘good’, ‘okay’, ‘I’m great’, ‘I’m fine’; you have to answer with adjectives like ‘I’m excited’, ‘I’m frustrated’, ‘I’m exhausted’, ‘I’m joyful’ and whatever you’re feeling that morning. It definitely makes you more in tune with your more vulnerable side. I love people who are comfortable with their emotions and can talk about their feelings, and that’s what this record is about.

I can hear the Smiths in a song like “Looking For Love”…
Soko: Yeah, totally – I love the Smiths. On that track, I thought ‘I’m going to channel my inner Morrissey now, it’s only two lines in the song but I feel I have to embody him when I’m singing it…’

What do you think about where Morrissey’s head is right now?
Soko: Uh, I don’t know where his head is now. I support him as a musician and another fellow vegan activist but there are obviously things he’s said that were quite rude and inappropriate.

He appears to have gone a bit right-wing…
Soko: [Pause] I don’t know about his political views. That is not where my heart resides, so…

If you can divorce yourself from it and not let it spoil the music then great!
Soko: Yeah, but it’s hard. We just had a similar thing in France with Roman Polanski winning best director at the Césars. He didn’t even show up to pick up his award because so many feminists were there. He was ashamed. It’s hard that people who are very talented can also have a dark side. We still love their art but we can’t really vouch for the man behind it.

Do you think there’s something inherent in French culture that protects artists no matter how bad their misdemeanours?
Soko: There’s a lot of shame around it. [Actress] Adèle Haenel stood up and left the room when his award was announced and a lot of people were like, ‘Oh, did you have to do that?’ It’s not like in the US where people were supported and applauded for coming out with #MeToo stories. In France, it’s still really rough.

Feel Feelings is released on June 12 via Because / Babycat Records.

Linkedin
RELATED ARTICLES
OTHER ARTICLES
For over a decade, gamblers have won big by employing people to place live bets from the court. But does this dubious method still work?
Rhiannon Adam spent three months capturing an ageing society wracked by division, isolation, and the aftermath of scandal.
The idea that a younger generation is abandoning work has become a popular narrative online, but it doesn’t necessarily reflect reality.
Rogue landlords are exploiting young and inexperienced renters and leaving them in mental and financial turmoil, reports Niall Hignett.
With skyrocketing rents, packed out viewings, bidding wars and more, renting in London has never been harder.
Sean Maung’s photos are a love letter to the Black and brown communities that make up New York.