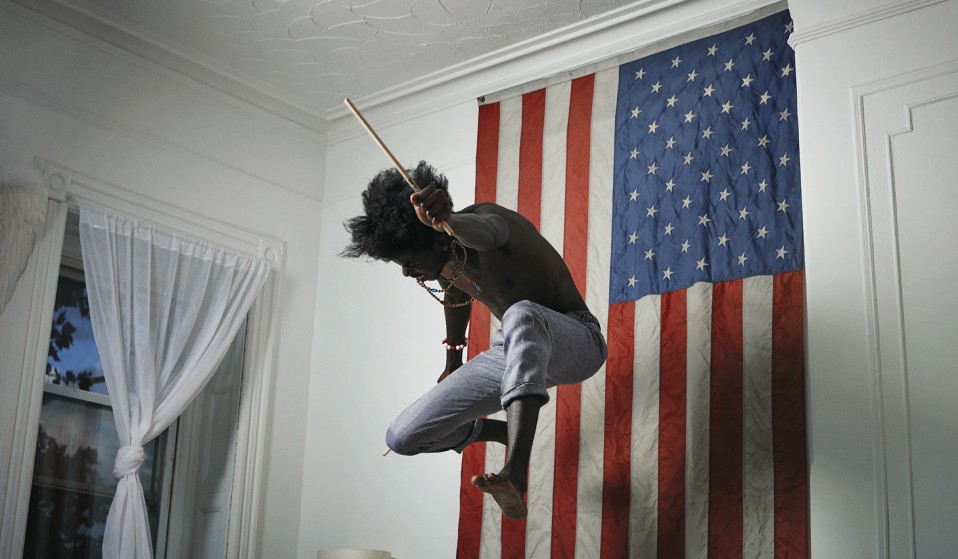 From Lars Ulrich to Questlove, photographer Deirdre O’Callaghan went out to unpick the enigma that surrounds the world’s most celebrated drummers.

From Lars Ulrich to Questlove, photographer Deirdre O’Callaghan went out to unpick the enigma that surrounds the world’s most celebrated drummers.

Pick a band, any band. Who’s the most mysterious member, the one you feel you know the least? Nine times out of ten, I’m willing to bet you’ll pick the drummer. Go ahead, take a second to think it through.

Despite their beat providing the pumping heart that keeps everything moving, drummers are more often than not the shyest or strangest member in any band – think Meg White from The White Stripes or Chad Smith from Red Hot Chilli Peppers. You get the idea.

Photographer Deirdre O’Callaghan set out to pull the limelight away from the frontmen and place it squarely on drummers. In The Drum Thing, she shot nearly 100 of the most celebrated drummers of all time, meeting them in their private rehearsal spaces and residences to find out what keeps their rhythm flowing. 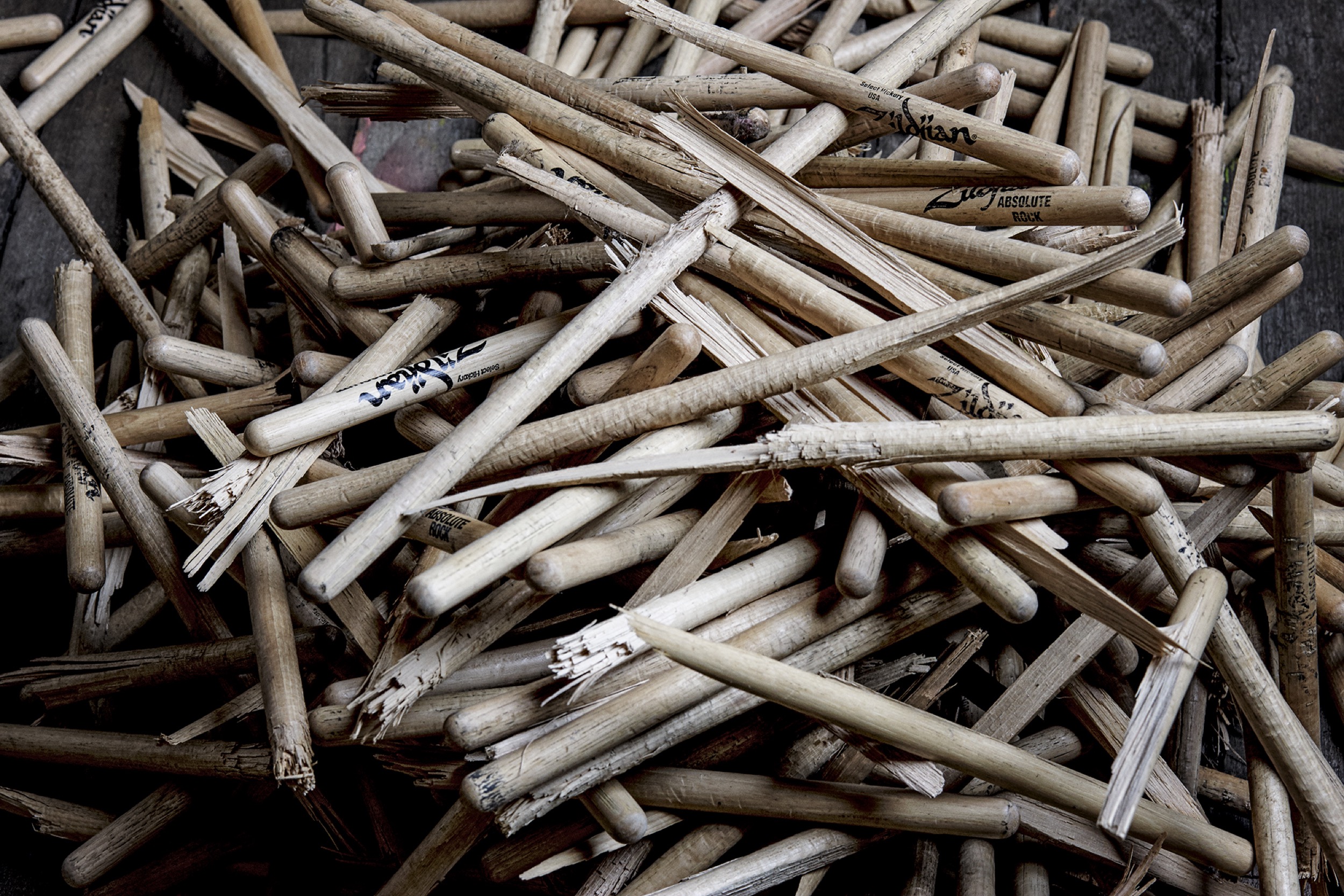 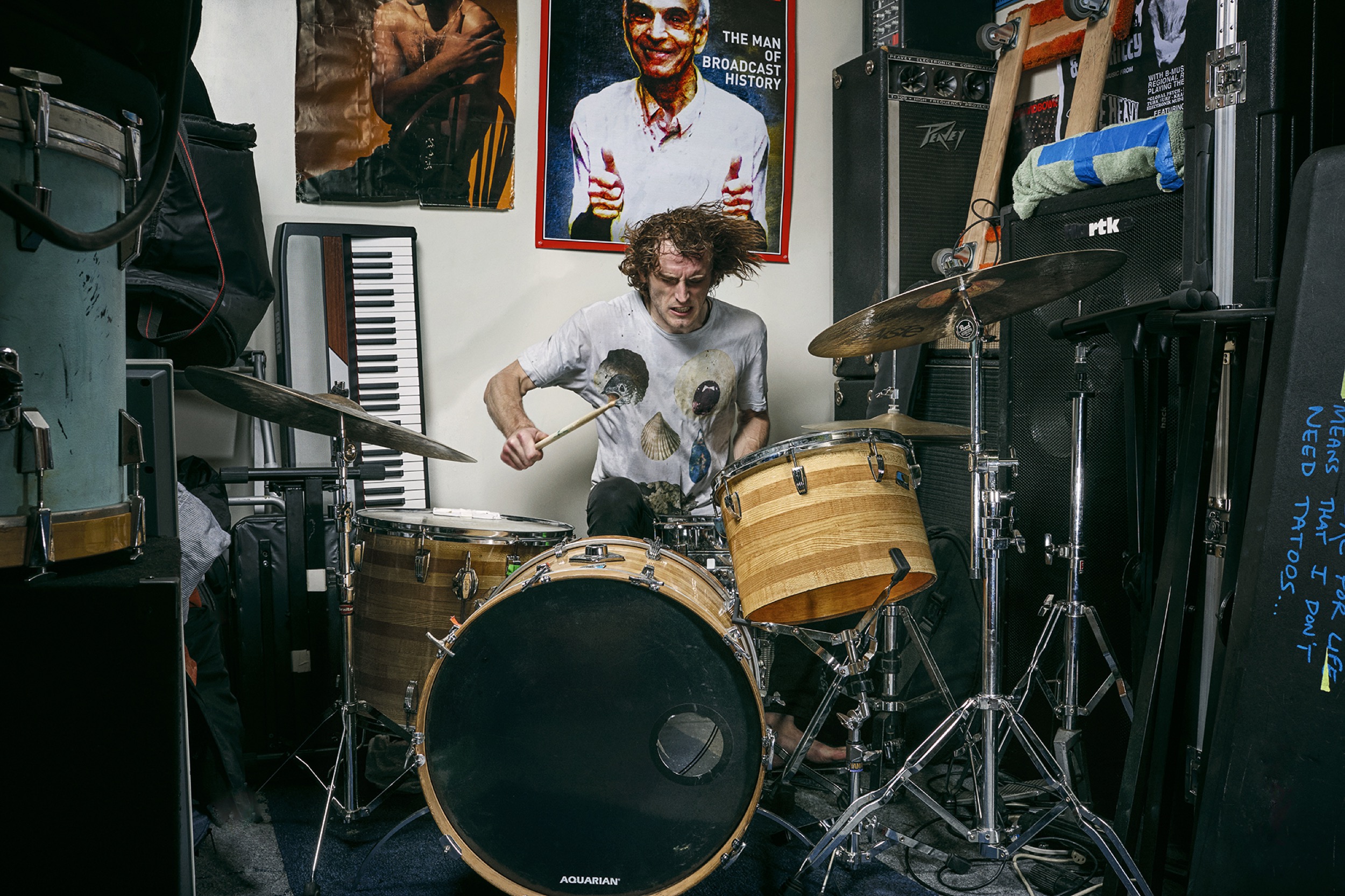 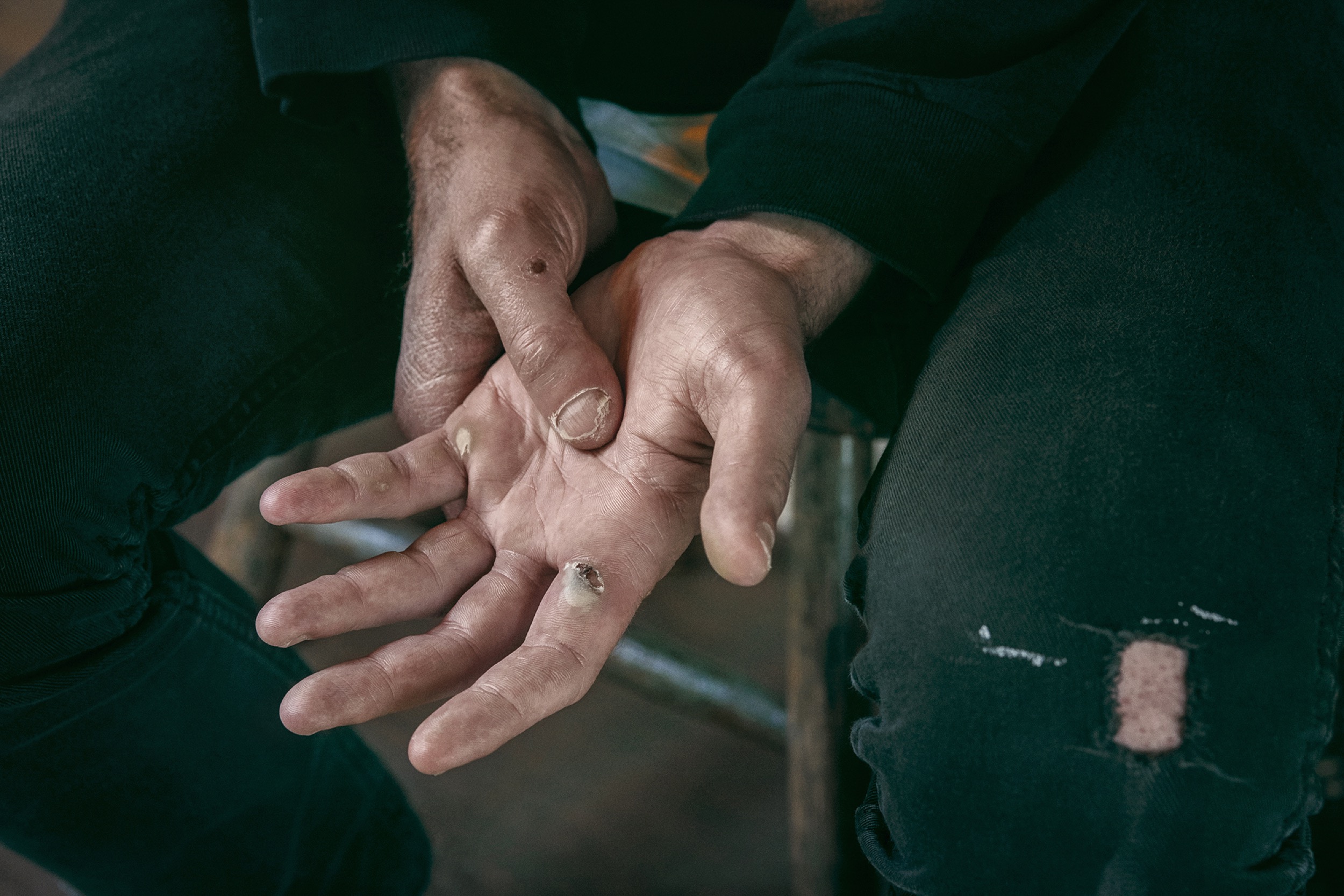 “I have a hard time talking about music because I play music. It’s my whole language and I play to express things that I can’t verbalise. I’m slightly a masochist by nature in a lot of ways. Playing, I want it to be biting me, grating on me while I’m doing it. It’s like I’m concentrating so hard that I’m not concentrating at all.

“I want to be overtaken when I’m playing and then that’s the time in my day not to think about other things and let something else in, let my body host a different type of energy through playing the drums.” 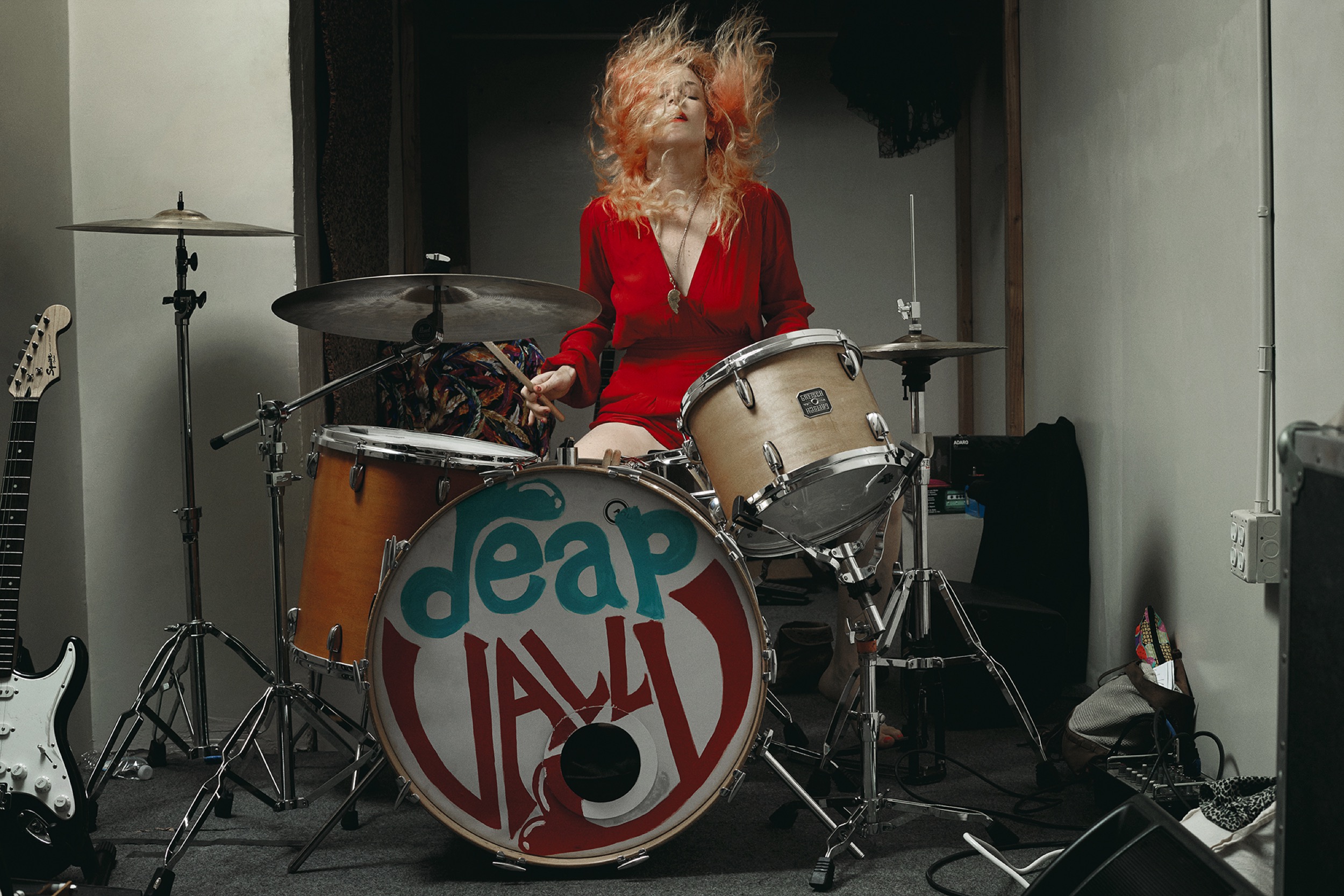 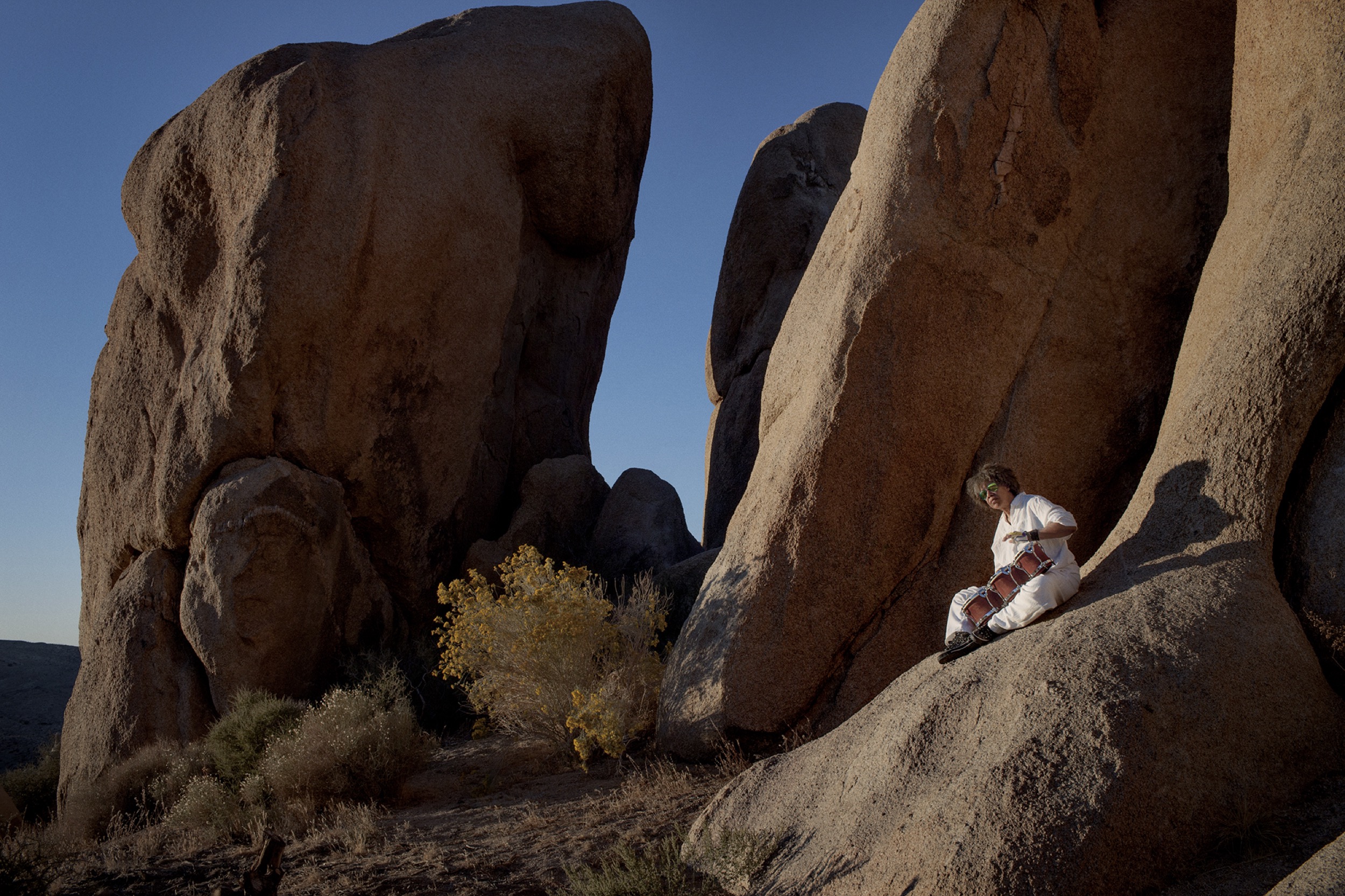 “When you play there is a place that you go, when you are in your passion. It’s not something that you do, it does it to you. You are the receiver and it doesn’t have the fingers and the thumbs to do it, so it comes into you and you are doing it. And when you do it, it’s like you’re not here anymore.

“Can I get back there? No, because those are special doors that I went through at that moment. It’s almost like abduction: you came back and you looked at your watch and it was a different time. You can’t really explain it.” 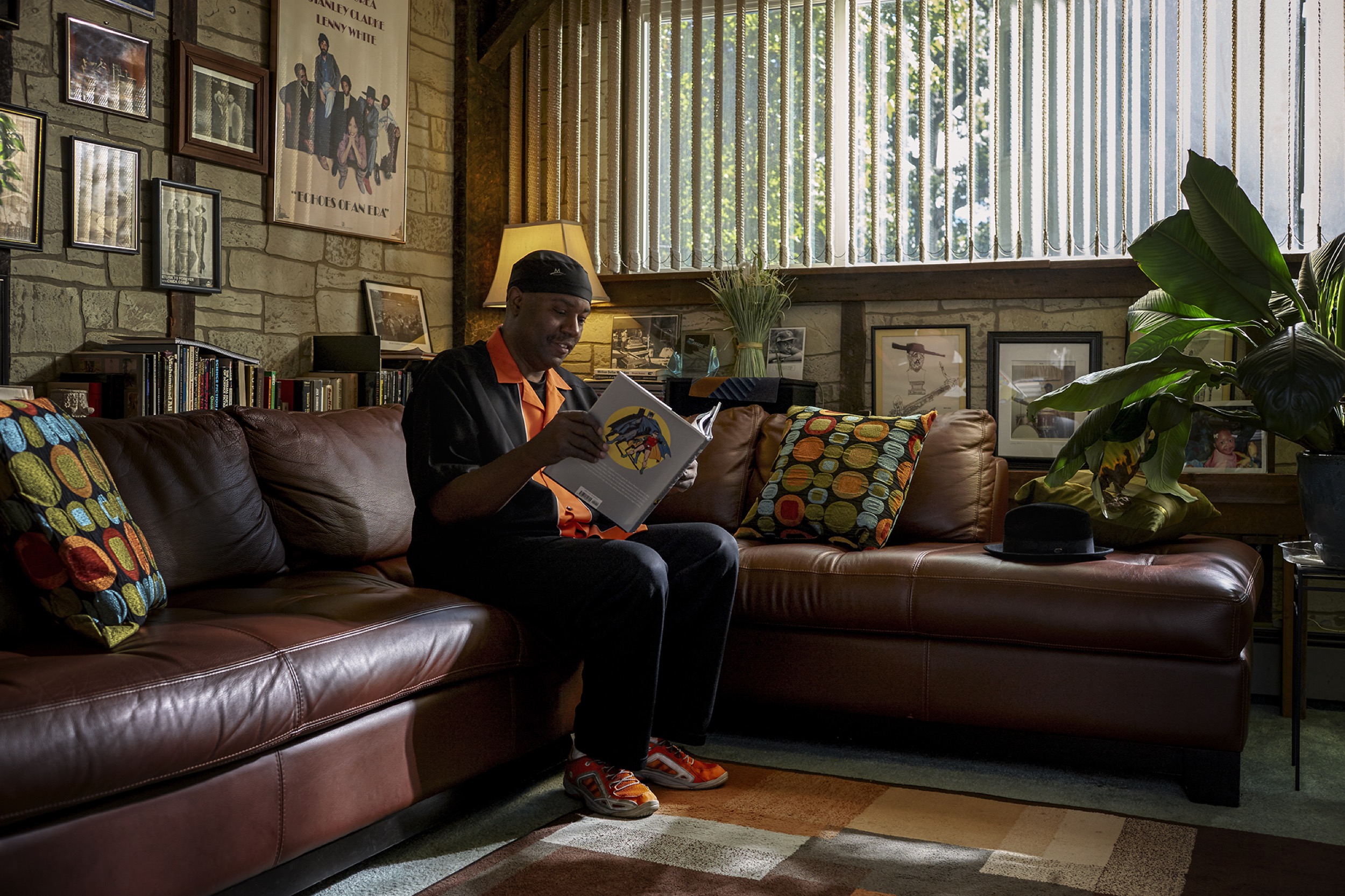 “There’s a natural rhythm to the universe and some people are closer to that pulse, they understand things a bit better. Rhythm is something that’s innate and inherent in everything, because everything vibrates, everything is frequency. Everybody has a heartbeat. Everybody knows how to walk, and when you walk there’s a rhythm.

“All languages have a rhythm, like if you go to Italy and you hear people speak, they speak in a certain way and there’s a rhythm to that. In Italy the way the language flows is because of their use of vowels. The difference between Italian and English is the emphasis is on consonants, not vowels.

“I listen that way and really use that in my playing. I’d ride train a lot back and forth to school; listening to how the trains go, these rhythms – these kinds of things stay with me.” 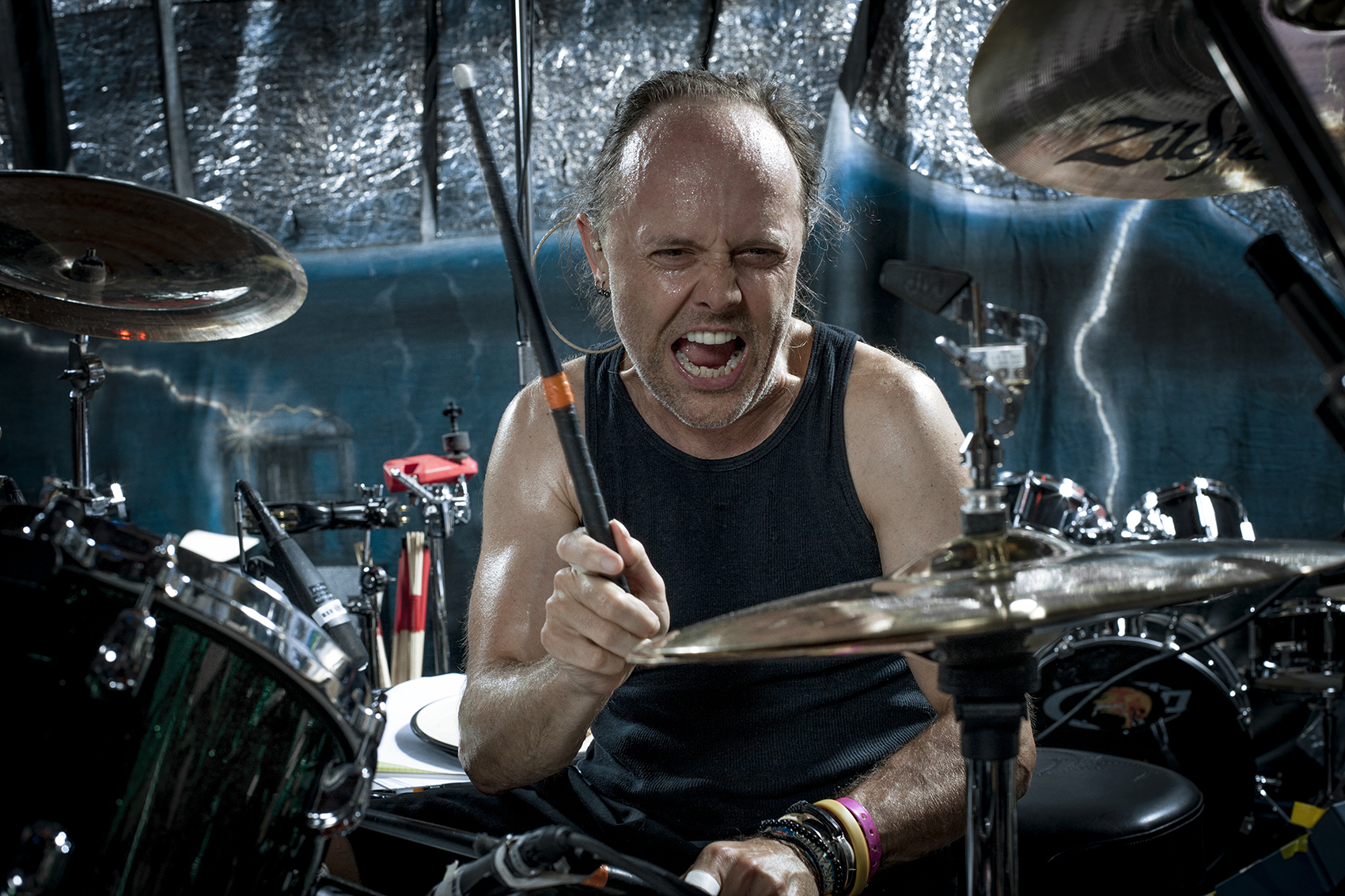 “What separates the great from the good? Probably the ability to listen. To me the greatest turn-on is people who listen and pay attention. Whether it’s to music or to conversation or to their environment, it’s just being in the moment. I think the best musicians are the ones that really can listen and interpret – at least that’s the stuff that interests me more, much more so than ability or showmanship. I love being around people who listen. I think it’s probably the most underrated virtue.” 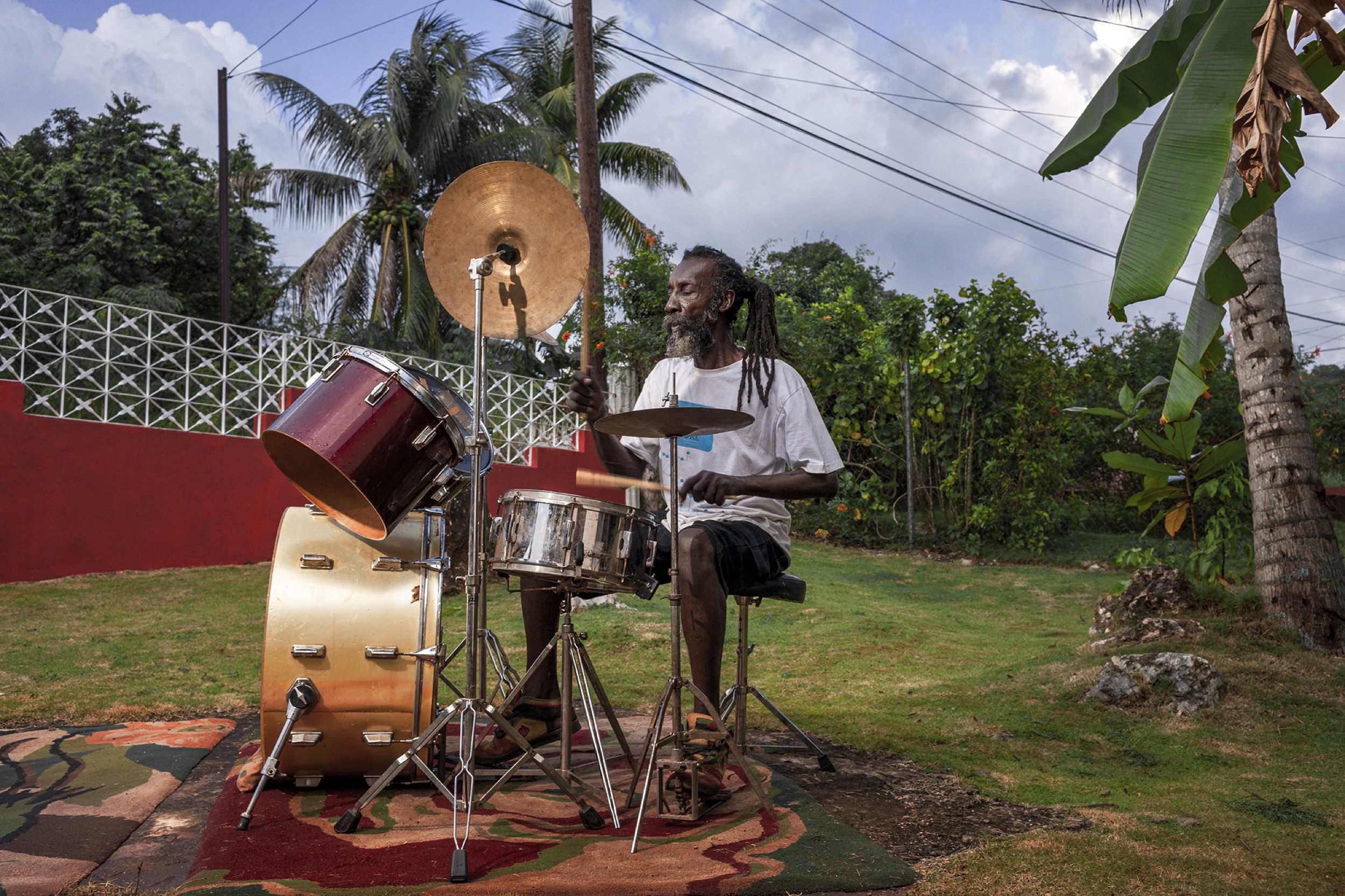 “I still play music because, just like my friend Bob Marley, I have a dream. We talk every day, I still hear him in my ears. I hear Bob Marley speaking to me, he say, ‘Horsemouth, go there and do it. You are there. Maybe you’re the only one left.’ It’s like a revolutionary in a battle and we’re going to be victorious.” 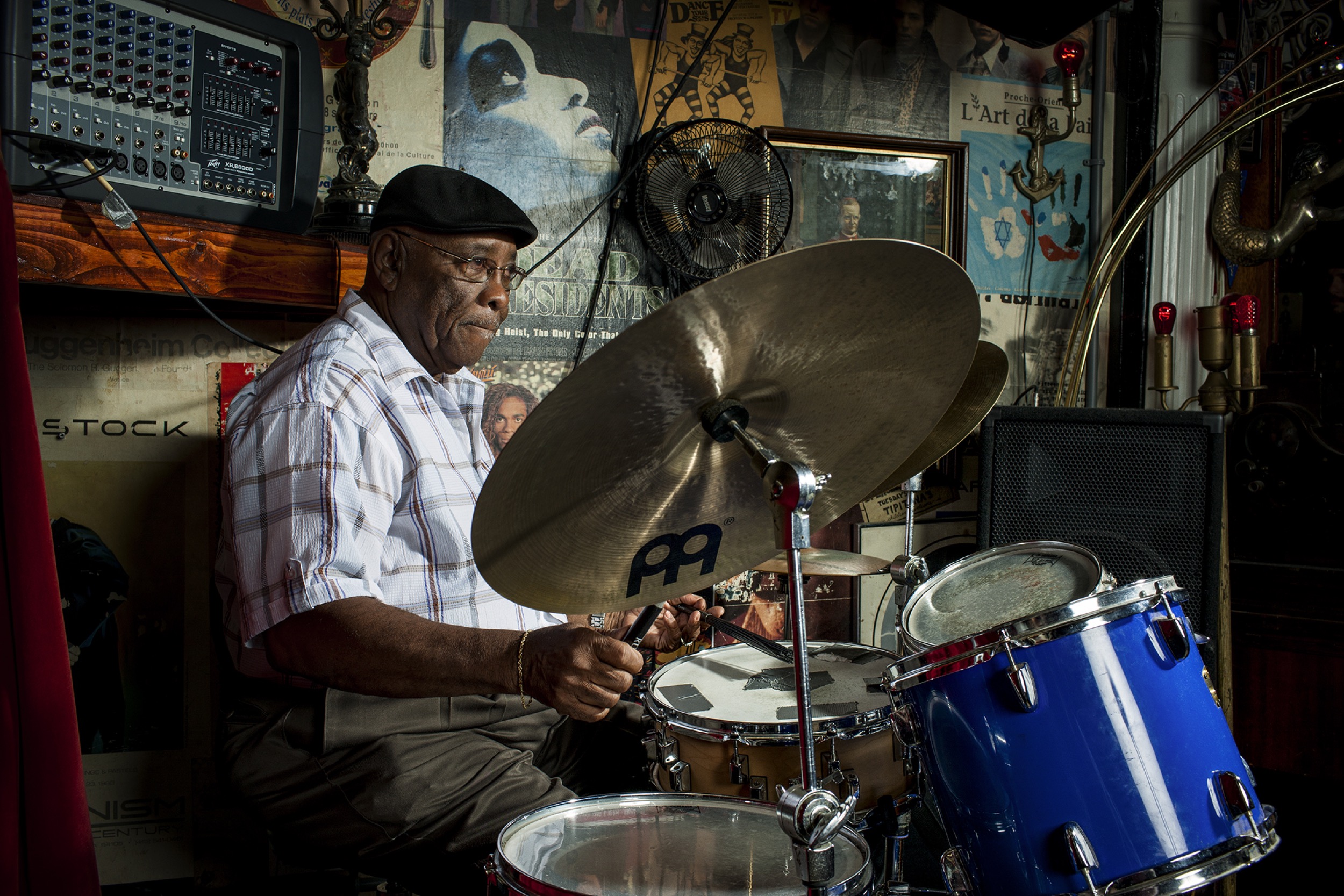 “There have been quite a few gigs that we played [with James Brown] where we really went off – like the crowd was there but you shut that out and you’re into your groove. I never will forget a gig at the Olympia theatre in Paris. We got into a tune, we really got into it. I mean we couldn’t hardly stop the groove. James just went off stage and we just kept pumping. I don’t know what it was, you can’t explain it.

“And we could not stop, and we just played and played, and the longer we played, the harder the groove got, and when he came out at the end, that’s one of the few times I know we had him – we wore him down. After the gig was over with, when everything was through, you could still feel that pulse. It was amazing. That groove, it was still there.”

“When I play a drum machine, I really go to town on the fact that it’s an instrument that needs to be pushed to its limits in the same way a clarinet or a drum kit or whatever should be played. I think drum machines are amazing.”

The Drum Thing by Deirdre O’Callaghan is out now, published by Prestel. Check out the launch event at the Photographer’s Gallery, London on October 20.

Linkedin
RELATED ARTICLES
OTHER ARTICLES
A series of photos by the late Jerry Dantzic taken in 1957 show a tender side to the iconic Jazz musician.
The author discusses her new memoir, which offers a sobering reflection on the racism and otherness she’s experienced along with a joyful celebration of her culinary heritage.
One year on from the fall of Afghanistan to the Taliban, Tiara Ataii speaks to those who have been forced to make the treacherous journey to Europe for safety, and the barriers and horrors they have faced.
Steel City is often overlooked when it comes to the country's cultural radar despite its role in shaping electronic music.
Students are being left to languish in unsafe housing, in some cases leading to serious health complications.
We introduce our series spotlighting the voices of people who’ve been impacted by anti-abortion laws and anti-choice protestors.