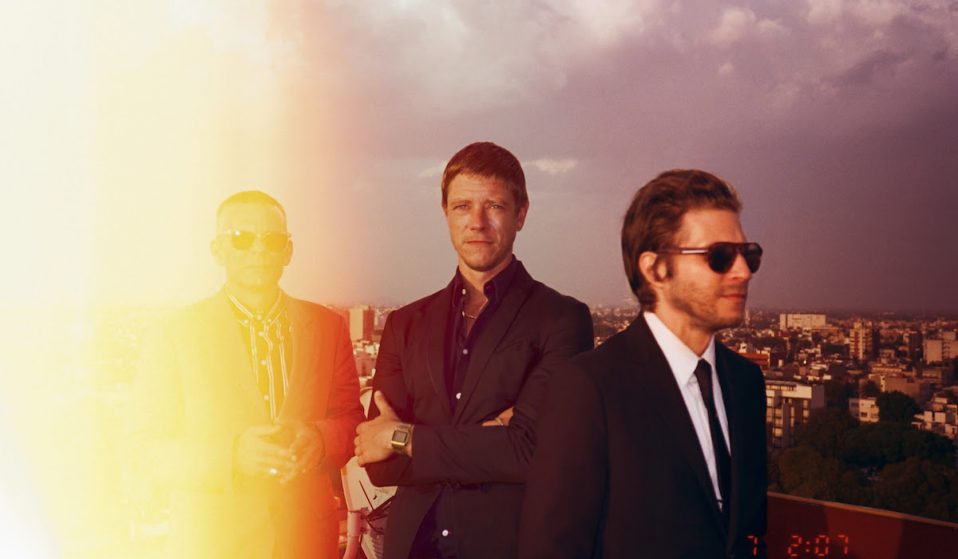 Following the release of the band’s sixth studio album, we sit down with Paul Banks to discuss chaos, confrontation and why he’s not as delicate as he used to be.

Following the release of Marauder, the band’s sixth studio album, we sit down with Paul Banks to discuss chaos, confrontation and why he’s not as delicate as he used to be.

There’s an anecdote, courtesy of journalist April Long, that does a good job of illustrating the sheer, colossal reach of Interpol’s influence at the beginning of the 21st century.

Taken from Lizzy Goodman’s Meet Me In The Bathroom (that ubiquitous oral history of the modern New York rock scene) Long’s story explains how, upon the release of the band’s 2002 debut Turn On The Bright Lights, kids in Nottingham began going out in tailored suits, à la the attire worn by the band onstage. “After Interpol, everyone wanted a well-cut suit,” she remembers. “They were some slick-looking guys.”

See, when Interpol first broke, they were as crucial in a small city slap-bang in the middle of England, three-and-a-half thousand miles away from home, as they were in NYC. Though a sonic embodiment of the New York of then, their impact was truly global: they were, during that time, one of the most important bands in the world.

Things have changed a little since then. After following TOTBL with the equally imperious Antics (2004), their third offering, Our Love To Admire (2007), divided both critics and fans. Reception towards their fourth studio album – self-titled, released in 2010 – was even cooler, with bassist Carlos Dengler leaving the band shortly after its completion. By the time they’d returned four years later with El Pintor (their first release post-Dengler) Interpol were a very different beast indeed.

For Paul Banks, the band’s baritone figurehead, hindsight’s a wonderful thing. “I think you have to suffer for your art, but I don’t know if I need to suffer the way that I did in a certain point in time,” he says, fresh from performing two intimate shows in the UK to celebrate the release of album number six, Marauder.

With the new record, Interpol feel at peace. Unshackled from the weight of expectation and a healthy distance from the disagreements and departures that risked displacing the music as the band’s defining narrative, the new album is both a shift in a new direction and a return to form. This isn’t the Interpol – nor the Paul Banks – of old. And that’s okay.

When the album was first announced, you spoke about the Marauder character – “the guy that fucks up friendships and does crazy shit” – being a facet of yourself. Was that kind of self-confrontation a new experience for you?
I don’t think so. I feel that I’ve always had to be really honest and transparent – the whole idea for me has always been to to try and be revelatory. It’s like, in the past I would go to like the masquerade ball in an elaborate mask. In some instances, on this record, it’s like going to the masquerade ball without a mask and just sort of saying, ‘This is how I choose to present myself in this context.’

But I don’t look at it like now I’m really exposed. I kind of feel like all of my lyrics have always been about being open and transparent, it’s just that the words and the characters I would use were a little more inscrutable, a little more enigmatic, and a little bit more distant from a true first person.

Do you find writing cathartic?
I think I find singing cathartic. But the process of writing? Yeah, it’s like a slow catharsis, sure. When I get like some rich idea in my mind, or something evocative out in a phrase that sort of appeals to me, I think there’s a sense of satisfaction there – but catharsis for me kind of feels like a quick experience. I feel like I experience that when I sing, but because writing is over such a drawn-out period of time, overall it’s cathartic, but not as much as the process of singing, which is so visceral and immediate.

To jump back to this idea of confronting a version of yourself on the album – do you still see yourself as that guy, or is it directed at a younger, more reckless facet of you?
Yeah, but I don’t even see it as reckless, you know. I don’t feel that I’m, like, a safer guy nowadays. I think it’s that, just through self-knowledge, you come to realise the behaviours that you used to manifest and the outcomes those kinds of things have.

What do you mean by that?
I think about the first time I got a tattoo. Everyone says, ‘Tattoos are permanent’, but I was kind of realising, ‘Well, so is every decision I’ve ever made.’ Everything I’ve ever said is permanent – you can’t undo any of it, so what’s the difference? With time, you just sort of reframe what your behaviour was.

So, I look at that person and I’m not ashamed or angry that there’s this Marauder in me. I look back in a fond and caring way at those facets. I also think the Marauder, the way I look at it, it’s like the little Tasmanian devil… wait, do you know that cartoon character, the Tasmanian devil?

Yeah!
The little fireballs are spinning in circles inside and I feel like that character is something I would never want that to extinguish. The things that you do that are more haphazard and reckless when you’re younger, the impulse – to push boundaries and explore – is great.

As you mature, it’s good to maybe pick those battles, or sort of realise, ‘Okay, well when I’ve done these things the pay-off has not been good, in fact there’s been damage that has ensued, so I want to maintain this fire, but I want to be a little bit more forward-thinking and wise when I implement that facet of myself.’

Does that come with age?
I think, honestly, if your experience isn’t making you stronger then there’s something wrong with you. Like, with Interpol, there’s always been a long, meditated stage of me working on lyrics, but I when I made a record with the RZA, we’d be in the studio and he’d look at me like, ‘Okay what’s the vocal?’ It was like, ‘Shit I don’t have eight months to ruminate on what I’m gonna sing about, let’s go!’

I think for me working outside Interpol has always brought back some good benefits to my presence within the band, helping me move forward in terms of just trusting myself, trusting my ideas, not getting in my own way.

Do you and the RZA still manage to get together for a game of chess?
We played a show in Williamsburg the other day and he happened to be East Coast so he came out and hung out with us after the show. We did not get a game of chess in, but we were talking about it. I’ve been playing a lot of the guys in the park you know where I live, so I was giving the update – I almost took one of these top players the other day!

Have you ever struggled with your presence as a public figure?
It depends. I mean, if you’re talking about like band recognition, it’s always been a joy when fans come up to you on the street. I do think I wasn’t as prepared as I maybe would’ve liked to have been for the experience of criticism. I think that’s something that comes with age.

Like, we make this first record and I kind of feel, ‘Okay I have my own thoughts about myself and I think that these dudes are legitimately ultra-fucking talented.’ And I’ve been there while we’re writing songs and it’s a very free-form, chaotic process – yada yada – and it’s inherently, utterly original to me.

I think as I get older, I sort of realised that’s one of the prices of being a professional artist and that it is kind of public property – and then there’s people whose entire careers are about evaluating and judging that, and then framing that to people.

Press?
To be sensitive about press is really futile, because you should just be fucking lucky that they’re writing anything anything about what you do. But I was a little more delicate back then. So yeah, that part of having status was the only difficult thing – coming to terms with that.

You know, it’s a fucking open game. People can say whatever they want, and the more notoriety you get as an artist the more people are gonna say things. That’s how it goes. But I’m a lot more comfortable now. I just read the bad comments and leave it at that.

In that sense, do you want to grow old gracefully?
Definitely, man. I think physical health is a good way to do it, but it’s not as important as staying young of mind. I think that’s really what makes someone age gracefully. Retain the love of whatever it is that you do and I think that preserves you.

Marauder is out now on Matador.

Linkedin
RELATED ARTICLES
OTHER ARTICLES
Following the announcement of an 80% hike in the energy price cap from 1st October, crowds gathered outside the offices of energy regulator Ofgem to protest and declare their intention to undertake a payment strike.
By turning a real-life crisis into daytime television fodder, TV bosses have once again shown themselves to be completely out of touch with audiences.
Ahead of the release of their first collaborative album, the producer and rapper talk psychedelics and the state of UK hip hop.
The two-day long event returned to London this year, showcasing a spectacular parade, steel bands and Caribbean food.
Cindy Campbell recounts how her brother ushered in a new era of musical culture at a party she held in the Bronx in ‘70s.
The idea that a younger generation is abandoning work has become a popular narrative online, but it doesn’t necessarily reflect reality.