Art & Culture / Music / ‘It seems like I have this sexual fixation, but I don’t’ 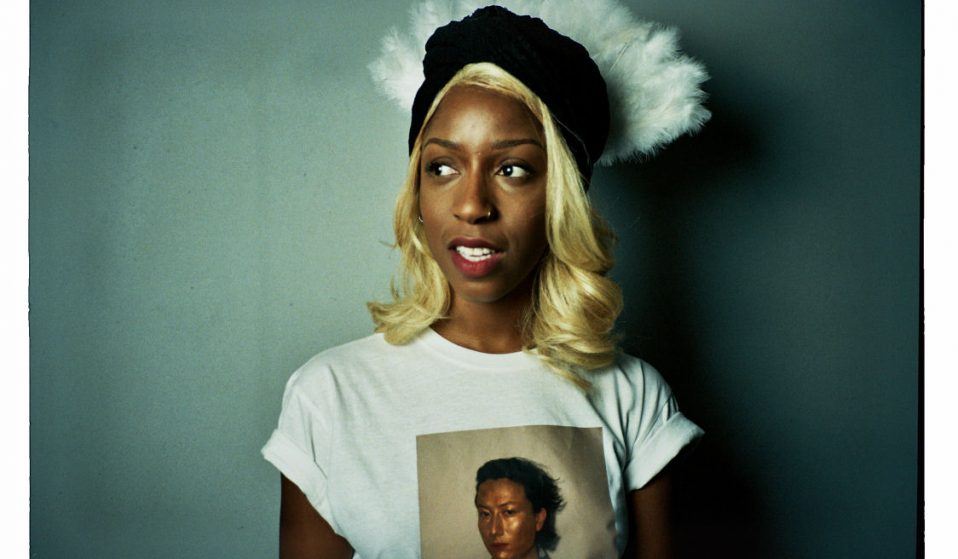 “I don’t see myself as having a kinky side at all,” says Charlotte Adigéry, with a laugh. “I wish I had, I’m rather boring!”

We’re talking about “Cursed & Cussed”, a song inspired by an imaginary, muscular homosexual man in latex cowboy getup dancing in a Berlin nightclub. “It seems like I have this sexual fixation when I look at the songs I wrote on the EP, but not at all. Maybe the next one will be about flowers or cows.”

Adigéry’s recent EP, Zandoli – which is part produced by Stephen and David Dewaele from Soulwax (and out via their DEEWEE label) – is not your average breakout material. While the five songs teem with ideas, the backing tracks are dangerously minimalist. Adigéry works with the electronic artist Bolis Pupul, who will fire up a preprogrammed biguine rhythm, and then sit back and watch as her imagination runs riot: female sex tourism, wigs causing ruination, sweaty latex covered bodies flexing at Berghain… it might seem like a riot of surrealism, but once you start to unpick it with the singer, it all begins to make sense.

We’re sat in an edgy south London coffee shop with a name that’s somehow offensive and twee at the same time (Fuckoffee), an indicator that we’re in an area of hostile gentrification. The only sign of its past is a greasy spoon adjacent, where I purchase a fried egg sandwich that slops out of its stale Mother’s Pride slices onto my coat like white bird poop. The world is changing fast, and I definitely should have got the avocado and egg brioche from the artisan boulangerie down the street. The upside of all this change, of course, is that an EP by a Belgian-Caribbean artist sung in several languages eulogising about synthetic hair pieces is something we can all get behind. As much as I love the Beatles, who are playing loudly in the coffee shop as we talk, it’s heartening that pop is becoming more culturally fluid and internationalist – even if our politicians aren’t.

You may have heard Charlotte’s other project Wwwater last year, with the biting, social media-baiting “Screen”. She has kept the projects separate, with no plans to merge them anytime soon. The slight confusion this causes whilst researching means I expect our interview to be like cracking an enigma code – but Adigéry is thoroughly engaging and funny throughout.

Songs in the rock and roll milieu tend to be about boring universal things like lost love and longing. You write about female sex tourism and wigs, among other things. Does being very specific actually make you seem more enigmatic?
I don’t intentionally try to be enigmatic. I didn’t even realise I was, so I feel cool right now [laughs]. As you said, with these universal themes, it feels like everything has been said. I have two projects, and the other one is more about raw feelings and emotions, and it’s a more therapeutic way of writing. With Charlotte Adigéry, I see myself as an observer of situations or phenomena.

Like on the very catchy “High Lights”, which starts with the line: “I tend to change my hair too much / It has become my ruination”.
I invite myself to situations, like at the hair salon, looking around and seeing this world that other black women can relate to, while white people look into the shop thinking, ‘what the fuck is happening in there?’ I wanted to tell the story for people who were curious – to explain what’s happening in there – and also for black women, because it’s such a big thing in our culture. It’s a ritual, it’s self-care, it’s self-love, it’s self-expression, and I wanted to pay tribute to that culture. And black hair is also political. Wearing an afro in the ’70s was a political statement, because you had to look as white as possible. It’s still in there somewhere; black women lighten their skin or wax their hair or wear wigs, because they’re ashamed of their own hair. I’m not – I love my afro, but I love wigs as well. For me, it’s like an extension of myself. I can express myself while wearing a wig. Who am I gonna be this week? What am I going to wear?

You also change your identity, with Charlotte Adigéry and Wwwater. Why the compartmentalisation?
Charlotte Adigéry is far more synthesiser-based and has a glossy side, without it being superficial or plastic. I work with Bolis Pupul and we make the songs together. He’s a really good producer. And then when the songs are 80 per cent or 90 per cent done they’re given to Stephen and David who then bring their magic. With the contribution of those guys, it has a more glossy finish to it. Wwwater is filthy, it’s dirty, it’s edgy, and I want to keep it that way. So I can tell stories and portray universes and phenomena with Charlotte Adigéry, and with Wwwater it’s raw and has a punk vibe to it as well.

How did you end up working with Soulwax?
They live in Ghent where I grew up as well. One of the stagehands who works for them – and also worked in a band I did backing vocals for – called me and said Stephen and David are doing the soundtrack for a movie [Belgica] and they want you to participate because they’ve heard good things about you. We met in their studio, the legendary DEEWEE studios. And then something changed in the plot of the film and they wanted a softer ending, and they wanted a song that suited that ending, and so they asked me to sing. It went well and it was super easy and they said they were impressed: I couldn’t believe my ears! I had Stephen and David saying if you ever need help with anything we’re here to help you. They’re amazing – one of a kind.

Ghent has a famous altarpiece. That’s about all I know about Ghent.
That’s about it [laughs]. It’s a beautiful small town with a lot of music and culture. As a musician you can really play and earn some money – not too much, I’m not rich. You have a lot of opportunities.

And aside from growing up in Ghent, you’ve tapped into your Carribean lineage too.
Everybody has a unique story. The beauty of being an artist is digging into it. Find your own story and be fearless, and try not to copy other things because it already exists.

English has been the pop lingua franca for the last 60 years or so, and that’s starting to change, which is exciting.
It is! And social media and the internet has had a big influence on pop. It’s a great tool for crossing boundaries. The internet isn’t a country, it’s one universe or one entity. Not so long ago you didn’t have artists like me – a product of slavery, to put it bluntly.  I’m a second generation Caribbean descendant living in Belgium, and I’m also Belgian now. I’m from Martinique and Guadalupe, I was born in France: my mom moved to France, and my dad moved to France as well, and they met in Belgium. That’s already unique. Having those worlds combining is something I see a lot of now. It’s such an intriguing phenomenon and will enrich music and art.

How do you reconcile growing up in an imperialist nation that committed many of the worst colonial crimes?
I don’t compare. I don’t think what the Belgians did was worse, it was all gruesome. The country has never apologised for what Leopold did in the Congo. One politician said if we apologise now there’ll be lots of claims for compensation. And that’s the country I live in! The difference with other Imperialist nations is the fact the Belgians haven’t apologised yet, which minimalises immigrants and black people. And maybe it was taught to us in school, but I don’t remember learning about the genocide in the Congo. It’s not the Belgians now who did it, but there’s a responsibility you have to take as a nation to apologise for the things you did.

Perhaps all the baby boomers will die soon and then we can restore some order.
You know there’s this Belgian tradition in December with Black Pete (Zwarte Piet), who’s like Santa Claus but in more Christian robes. He gives to kids, and the bad kids are put in a bag by black servants. When you say they look black and they have red lips – and some white people would get dressed up in blackface – they’d say: ‘but it’s not black, it came from the chimney’. But it isn’t true. And when this got critiqued, people would say, ‘it’s tradition’, and ‘stop nagging’. And that’s always the case when we criticise and when we feel hurt; they’ll say, ‘but you should be happy that you’re here’.

Linkedin
RELATED ARTICLES
OTHER ARTICLES
From the Yakuza to a biker gang, Bruce Gilden recounts capturing Tokyo and Osaka in the ‘90s.
The author discusses her blistering new novel about history, revolution and queer love.
The government’s failure to take long Covid seriously has led to the formation of a group campaigning for the thousands of forgotten victims of the illness.
Following the release of his latest album God Don’t Make Mistakes, the rapper talks horror villains, police brutality and being unafraid to show his vulnerable side.
Over the weekend, London locals came together to resist a pre-planned police raid targeting delivery drivers.
Following the release of his newly republished 1991 book, Redheads, the American photographer reflects on his celebration of ginger people and their magnetic power.