Issue Archive / Japanese Breakfast on the places that have defined her 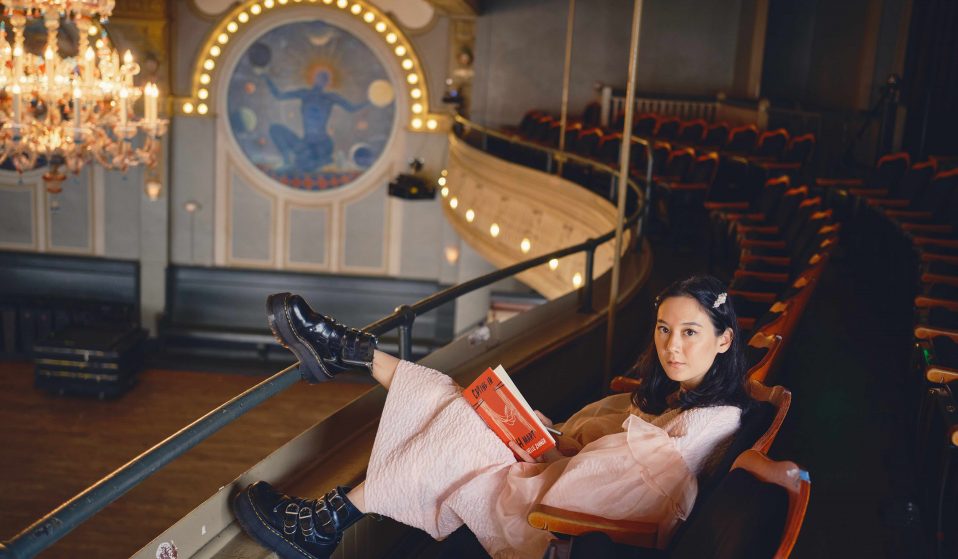 We sit down with Michelle Zauner to discuss the places that have defined her – from her isolated childhood home, to the spots from which she wrote her searing memoir.

In this series, we interview people in – and about – spaces personal to them. For the latest instalment, we sit down with the artist known as Japanese Breakfast to discuss the places that have defined her – from her isolated childhood home, to the innocuous writing spots from which she completed her searing memoir.

Michelle Zauner is contemplating the idea of boundaries. “A part of me is like, did I go too far?” she says, half-sighing, half-laughing. “But I think I naturally make intensely personal art. Often the most shameful admissions are the ones that stick with you.”

The frontwoman of beloved indie band Japanese Breakfast is no stranger to intimacy in her songwriting. But it’s the success of last year’s memoir, the New York Times best-selling Crying in H Mart, that has inspired today’s exercise in self-evaluation. The 32-year-old’s lyrics have always been intimately personal – throughout Japanese Breakfast’s three albums, Michelle has explored the grief she felt following her mother’s death from cancer in 2014 – but in the book she truly bares her soul.

In its titular essay, Michelle walks the aisles of the eponymous Korean-American supermarket chain (the ‘H’ in H Mart stands for han ah reum, a phrase that roughly translates to, ‘One arm full of groceries’), asking whether her Korean identity has died with her mother. “Am I even Korean anymore if there’s no one left to call and ask which brand of seaweed we used to buy?” she asks. It’s a question that sets the tone for the rest of the memoir, in which she chronicles her mother’s illness, their turbulent relationship, and her own bereavement. 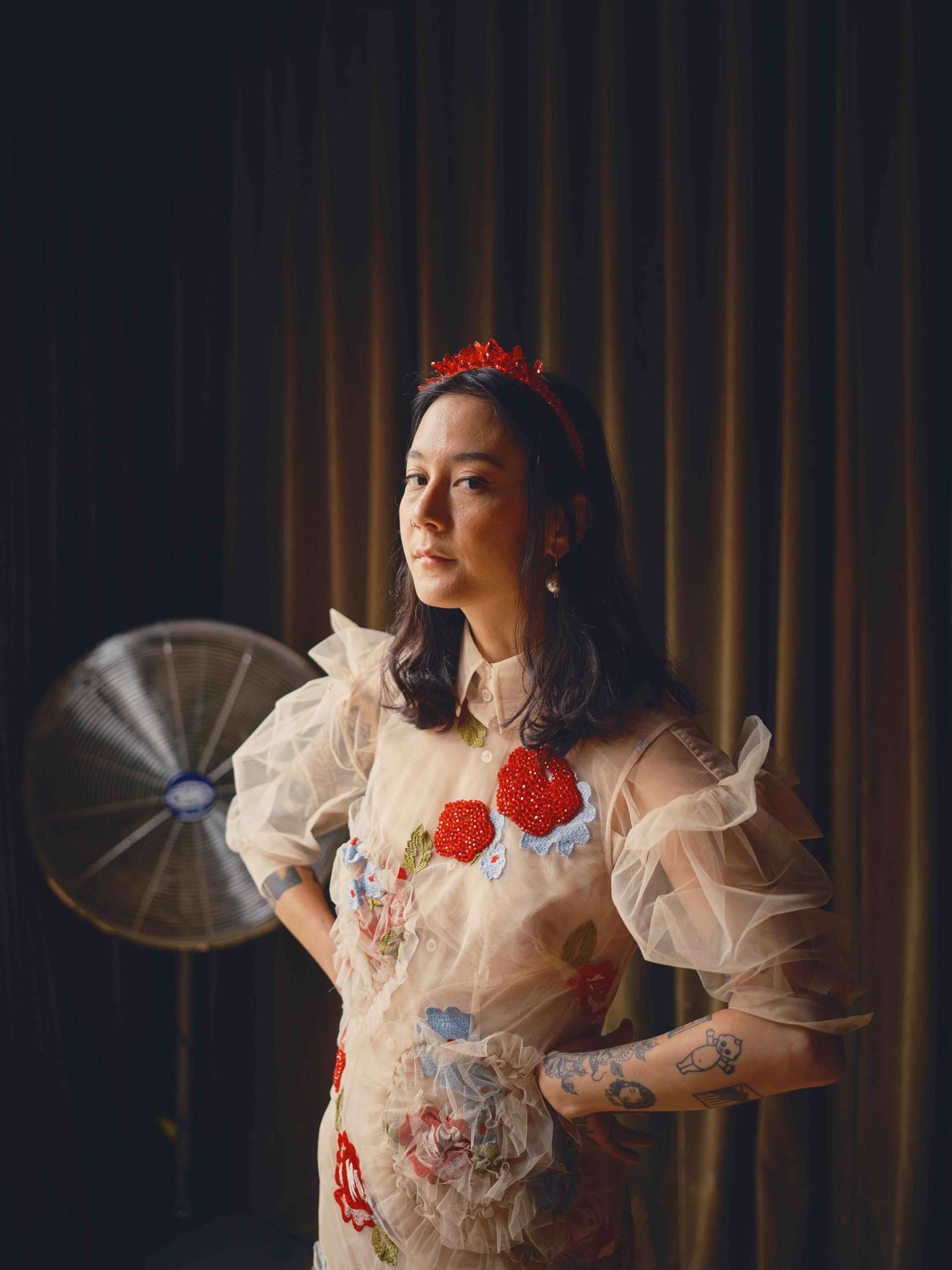 “I felt very angry that I’d never been exposed to someone who had shared a similar experience that could have prepared me for something like this,” says Michelle today. “I felt so ill-prepared at that time. I felt like [my book] could help someone like me in a similar situation. To the core of my being, it felt necessary to express this.”

Born in Seoul, South Korea, Michelle and her parents moved to the USA when she was just a year old so that her father could take up a job at his older brother’s truck brokerage company. The small family retreated to the woods outside the town of Eugene, Oregon, in the Pacific Northwest. “I spent a somewhat abnormal amount of time alone,” says Michelle. “I was an only child so I had a lot of solitude. There was no one to talk to or play with, no neighbouring children and no friends’ houses I could bike to. I had to entertain myself.”

Left to her own devices, Michelle began to create her own fun, dreaming up worlds she could retreat into. It was in her childhood bedroom, at a little blue, wraparound desk, where she began her musical career, putting pen to paper and learning how to write songs. 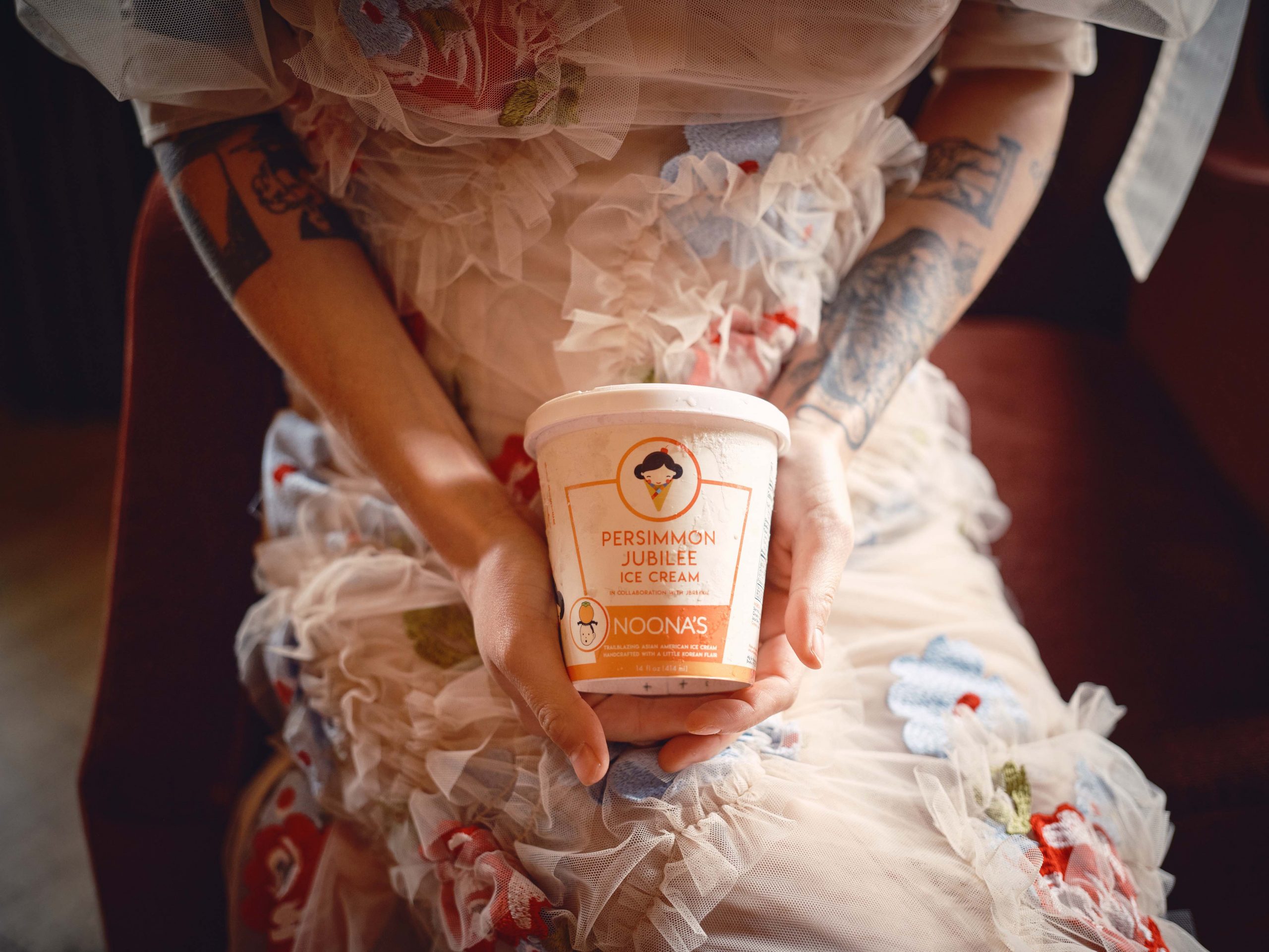 A decade later, she returned to that same bedroom, staying there as she cared for her mother, who would die six months later. “I spent six months in the woods taking care of her and then another six months packing up the house and destroying the evidence of what had happened there. I was so suffocated and sad in that space. All the furniture she picked out was so oppressively a reminder of her absence.”

Grieving, and becoming increasingly estranged from her father, soon even music became painful for Michelle – her passion had long been a point of contention between her and her mother. “Me pursuing music had made her very worried and I felt selfish for having that desire [to make music] after she passed away. I really felt like it was time to give it up.”

But in many ways, she needed it to mourn. An unrenovated, uninsulated cottage at the bottom of her parents’ garden became the place from which she created Psychopomp, the first Japanese Breakfast record. “I told myself that I would make this album and then let music go,” she says. “But it became so necessary for me because I felt like I was leaving the house to go to work. [The cottage] felt like a new interior that was separate from this tragic, horrifying reality after the worst year of my life.” 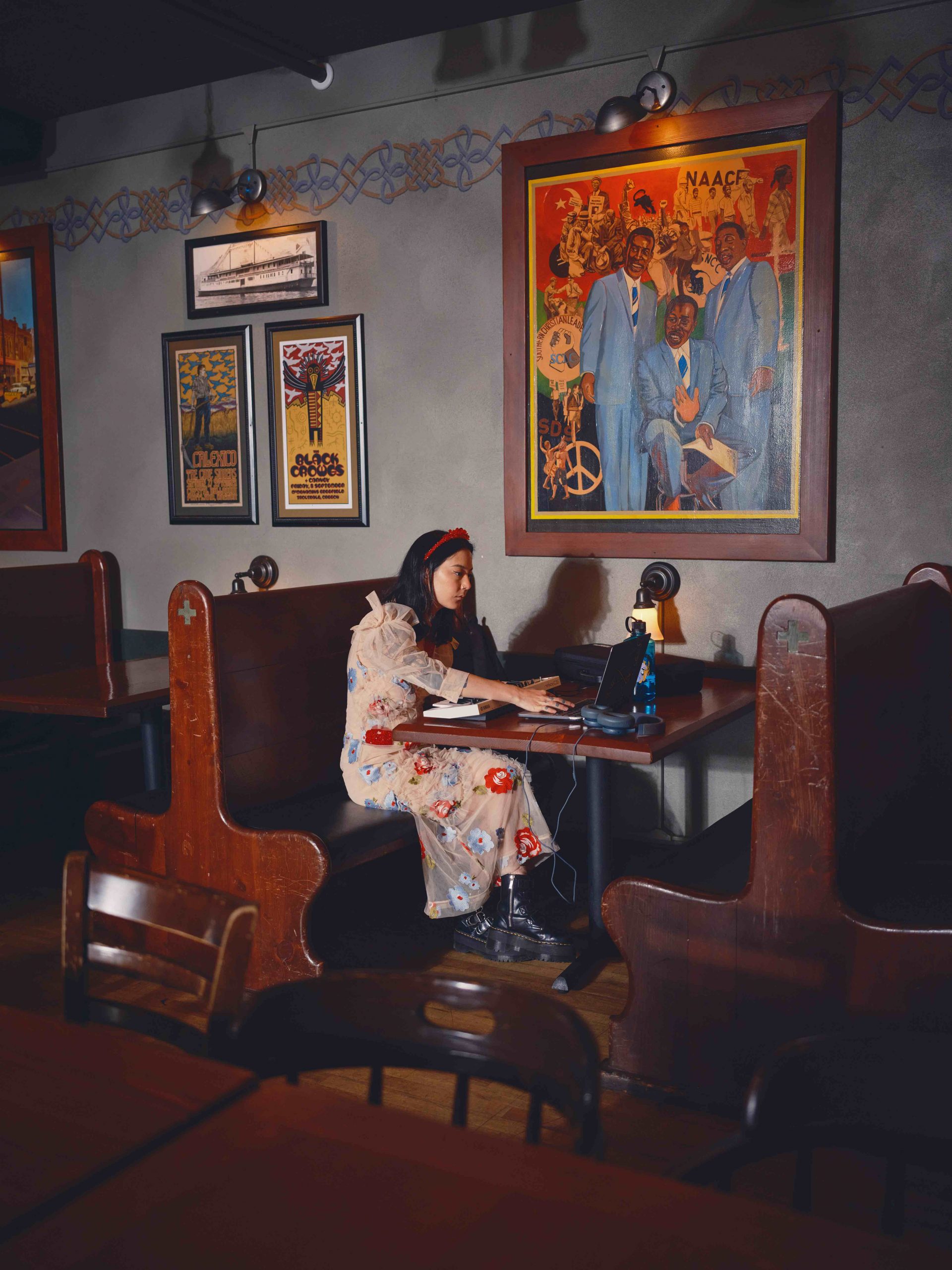 Michelle soon left Oregon for the East Coast as Psychopomp gained critical traction. Her childhood house was sold by her father. But that initial songwriting process became a blueprint for her work ethic moving forward: making art out of necessity, wherever and however she could. Today, she’s not precious about where she creates – most of Crying in H Mart was written in the back of vans and green rooms while on tours between 2016 and 2019. In this sense, it’s fitting that she’s calling today from the grey-walled production office of The Neptune, a venue in Seattle, the day after a Japanese Breakfast gig. When we speak, the band are preparing to pack up for their next tour stop: the Crystal Ballroom in Portland, Oregon, a homecoming of sorts.

In conversation, Michelle is a little tired – “coming back to tour after two years, it’s been difficult to get back my stamina” – but remains enthusiastic. She grows particularly animated when recalling the Korean dishes she’d eat while writing about them in the book, singling out kongguksu as a specific example. Much of Crying in H Mart details the way in which food eventually became a love language between mother and daughter. While she might not be precious about creative spaces, the aisles of H Mart – and their contents – are very much sacred to Michelle.

“I was in H Mart for the second Christmas without my mother having lunch,” she remembers. “I was living in Philadelphia and it was the closest thing I could associate with her, so I just gravitated towards going there. The real genesis of the book was that Christmas, watching families eating together. As someone who doesn’t have religion in their life, it was the closest thing I felt to a holy space.” 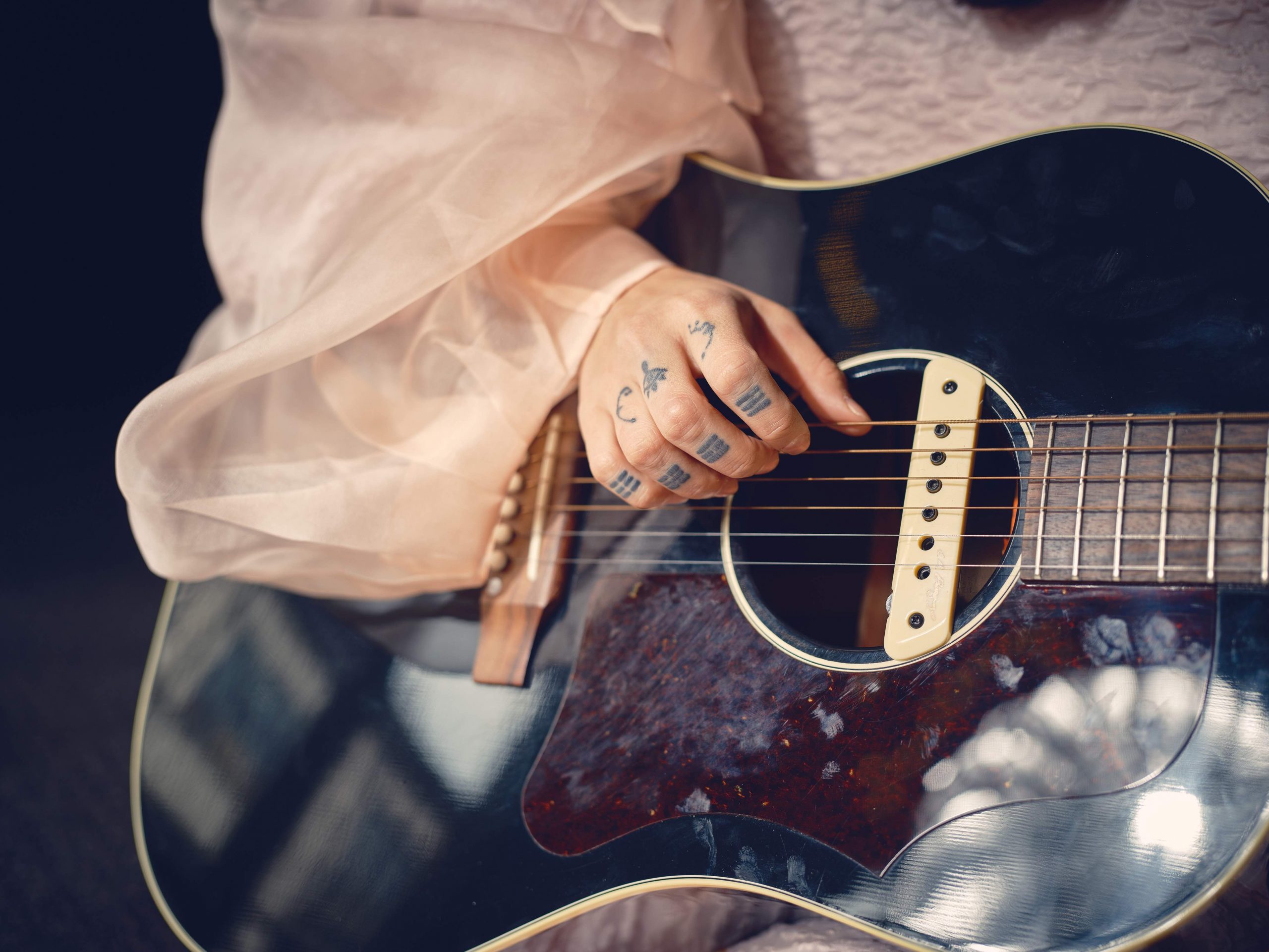 While, as a performer, studios and venues hold special meaning for Michelle, it’s often more humble, less “artistic” spaces in which she can be most productive as a writer. She names Korean spas, alongside restaurants and supermarkets, as meaningful places, as well as areas that are connected to her childhood.

In a sense, she sees herself as operating between two spaces: the stage, where she performs the work, and backstage where she actually makes it. (“I don’t put makeup on to pour over language,” she notes.) Covid-19 has undoubtedly altered her relationship with performance spaces – health and safety restrictions have only added stress to the already exhausting process of touring – but she’s also triumphant about her return to live music. “It’s just nice to be like, ‘This was my job and I’m good at it,” she adds, with a smile.

As we wrap up the interview, the conversation returns to food. Michelle and the band are staying in Seattle’s U District, which has a large Asian population and contains many of her favourite restaurants in the city. Before our conversation, which took place just after lunchtime, she was eating udon in one of them. I ask her about the differences in creating a meal and creating art, two processes that inevitably end with her offering something up to be consumed. She pauses before answering. “If I prepare a meal, it’s mostly for the people I’m cooking for to enjoy. I will just eat the meal with them. But it’s not really for my personal enjoyment or gratification, it’s more like a service and the guest is at the forefront of my mind,” she says. 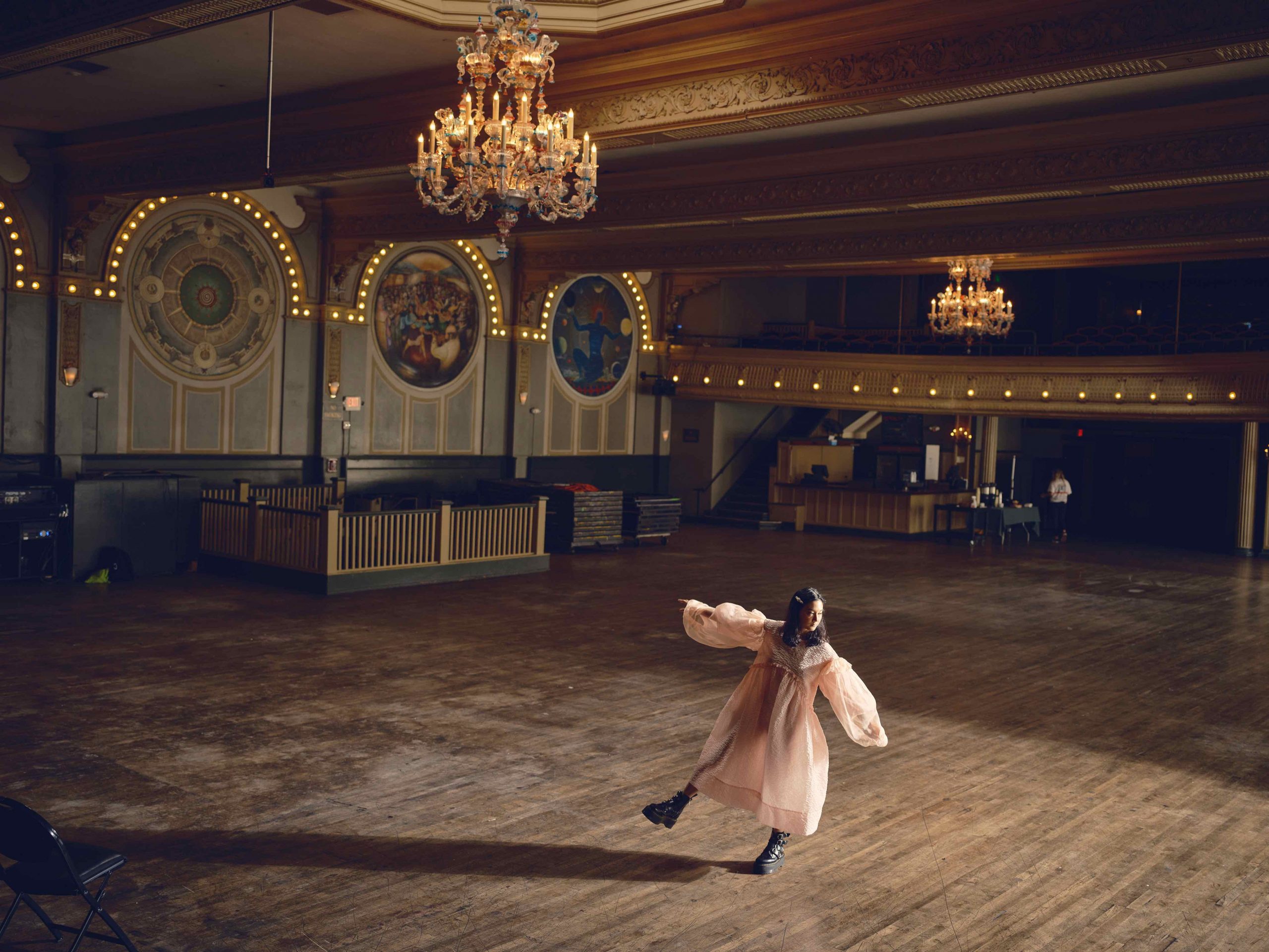 Crying in H Mart is out now on Picador.

Linkedin
RELATED ARTICLES
OTHER ARTICLES
The author discusses the all-consuming nature of heartbreak, and turning the experience into an incisive exploration of love and loss.
Finland-born photographer Sirkka-Liisa Konttinen looks back on her decades-long documentation of life in Northern England.
Photographer Arthur Grace recalls travelling through the Soviet Bloc and finding ways to evade the surveillance of his work.
With inflation now at a 40-year-high of 9 per cent, demonstrations organised by TUC took place to demand action from the government.
Over a dozen Stop Deportation activists locked themselves to each other outside a detention centre to prevent coaches taking those due to be on the Rwanda deportation flight from leaving.
50 years since its inception, and the campaign calling for recognition that capitalism depends on domestic labour is as pertinent as ever.