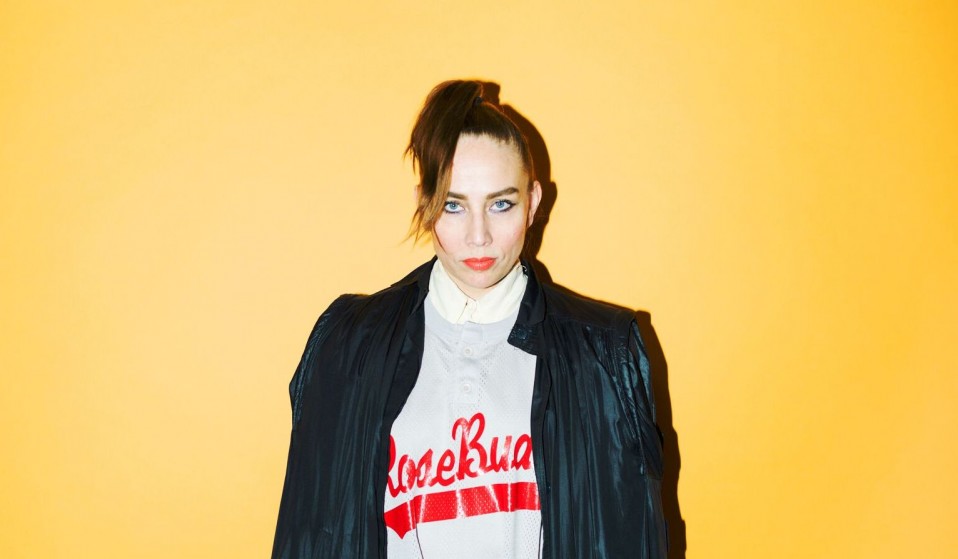 With her brutally upfront new album, EXORCISM, the Swedish artist tackles her experiences with sexual assault – using music and songwriting as a cathartic tool. ‘I want you to dance, I want you to use your body,’ she explains. ‘It doesn’t cure you. But it can make you feel better.’

With her brutally upfront new album, EXORCISM, the Swedish artist tackles her experiences with sexual assault – using music and songwriting as a cathartic tool. ‘I want you to dance, I want you to use your body,’ she explains. ‘It doesn’t cure you. But it can make you feel better.’

It’s not often that we hear artists make electronic music fuelled by necessity rather than inspiration. However, with Jenny Wilson’s fifth solo album, EXORCISM, which openly addresses her experience of sexual assault, as well as the trauma that followed, that was definitely the case.

In the making for the better part of a year, EXORCISM was the Swedish artist’s first musical exercise that was focused on purging a pain that was dealt to her – not chosen – so that she was finally able to make music again.

“I felt like it was impossible for me to make another album or write about anything else,” Jenny tells me. “It was like a big stone, blocking my way completely. I knew that I had to get rid of it.”

“I have to look at the trauma from different angles,” she adds, practically. “But I’m pretty sure that making an album doesn’t cure you.”

From an early age, music played a key role in Jenny’s emotional life; both as a way of expression, of survival and as an escape. Having decided she wanted to be an “artist” (whatever that meant) at the age of six, she picked up the guitar for the first time 12 years later while doing a writing course at university. The instrument soon became her “secret love”, and – fuelled by her admiration for PJ Harvey and her love for bands like The Cure, Kraftwerk, DEVO and Depeche Mode – Jenny began to write her own songs.

Her talent led to collaborations with both The Knife and Robyn, but it took 10 years of creating music before the singer released her debut solo album, Love and Youth, in 2005. As a poet, she wrote in her native language, Swedish, so to create music in English meant developing a high awareness for different ways of communicating and structuring lyrics.

This is something that especially stands out in the way she chooses to address the trauma she went through on her most recent music. In the first single of the album, “RAPIN*”, the musician recites the night’s events in an almost staccato way – her words clear as day, backed by an eerie electronic track. There’s no poetic license or flourish, no distance. The attack is told as it was, and is, felt.

“It took me a while to understand how I would cope to write these specific lyrics,” says Jenny, who, for six months didn’t feel able to pick up any instruments. “The subject scared the shit out of me. I was stressed about how I would do this without revealing myself too much, without hurting myself.”

“In the beginning, I played with the thought of intellectualising it and placing it into another ‘scene’, further away from myself,” she continues. “But I couldn’t do that. The process of making the music as well as the lyrics was so physical – it really came from out of my body.”

The resulting album is one that covers the many facets of being a survivor in a way that is honest. There are no generalisations. It speaks not only of the attack, but also of the widely unacknowledged duration of the aftermath, as well as Jenny’s natural process of dealing with her anger, fantasies of revenge, and underlying sadness.

At the time of creating the album, Jenny didn’t want her songs to be seen as political, or even as a statement about sexual violence itself – they were an outlet, something she felt she had to do in order to move on. However, when the #metoo movement bloomed in late October last year, she says that her perspective on it changed.

“Before the #metoo movement, I wasn’t sure if I would dare to talk about my album – the rape – in interviews,” she says. “The last thing I wanted to be portrayed as was a ‘spokesperson’ or, even worse, a victim. I just wanted to tell my very private story and use my life as a tool in my art.”

“I didn’t want it to be a political statement… I was very nervous about that. But when the movement happened, it was like a God-sent gift… I didn’t have to be the person at the front, I could hide a bit, but also deliver a super upfront, explicit story, free from a filter and very brutal… and people were all of a sudden readier than ever to talk about it.”

Despite the difficult and complex subject matter, the synth sounds heard throughout the album evoke a general need to dance, to enjoy, to let go – something many were confused by, but also something the singer intended from the get-go. She wanted a live performance to sweat the pain away.

“A lot of people have excused themselves – they tell me ‘I don’t know if I dare to say this but I really wanted to dance to that song, but the lyrics are so horrible, is it good or bad that I wanna dance?’,” says Jenny with a giggle. “I say it’s good. I want you to dance, I want you to use your body – it’s essential to actually shake your body to get rid of bad energy. It doesn’t cure you. But it can make you feel better.”

Linkedin
RELATED ARTICLES
OTHER ARTICLES
After a two-year hiatus and a new album, the Nigerian artist is riding high. Now, he wants to bring his alternative, genre-bending sound to the world.
After fleeing the war in Ukraine, people are finding it impossible to secure affordable and decent housing in the UK.
The first-generation graffiti artist reflects on the tagging’s emergence as an art form and the players who pushed the medium forward.
Jeffrey Henson Scales intimate portraits and protest images of the BPP and its leaders offer a rare insight into organisation at a time of societal upheaval.
Mass crustacean die-offs in the North East have led a community of fishermen to take action to save their seas.
From snake handlers to mardi-gras revellers, Tom “TBow” Bowden’s photos provide a snapshot of the wonderful and weird people who make up America.