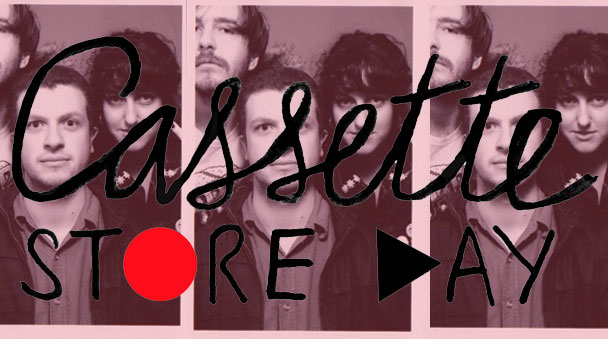 Rose Keeler-Schäffeler, Andrew Barnes and James Levitt of Keel Her celebrate the tape in the aftermath of Cassette Store Day.

Rose Keeler-Schäffeler, Andrew Barnes and James Levitt of Keel Her celebrate the tape in the aftermath of Cassette Store Day.

Launched just last year by a group of UK cassette label owners including Steven Rose of Sexbeat Records, Matt Flag of Suplex Cassettes, and Jen Long of Kissability, Cassette Store Day raised its game this year, September 27, with a ton more releases and a US branch run by American cassette aficionados Burger Records.

In the run up to the big day, last Saturday, we asked some of the diverse Cassette Store Day artists to tell us about their favourite cassettes and explain what the humble tape means to them. The final installment is Rose Keeler-Schäffeler, Andrew Barnes and James Levitt of dreamy bedroom band Keel Her. James also plays in Warmhammer who released a split cassette Beam Me Up with Keel Her for CSD.

What’s the first cassette you owned?
R: Whatever the most popular album by The Corrs was.
A: Gala’s ‘Freed From Desire’ and Notorious B.I.G’s ‘Mo Money Mo Problems’ in a glorious double purchase.
J: I think it was Eiffel 65, ‘I’m Blue (Da ba de da ba di).’

What’s your favourite cassette ever?
R: The Van Stonholdt tape.
A: Now That’s What I Call Music 35, Tape 1.
J: A toss up between Blood On The Tracks and Bakesale by Sebadoh, both originals.

What’s the best cassette artwork you’ve ever seen?
R: I had a really good one called ‘Mystical Pan Pipes’ which was all glittery but I love the artwork that Sophy Hollington did for the Keel Her Weirdo EP on IBB (not complimenting my own music just the artwork!).
A: Our mates in Sealings put out a tape where the song “Drop Dead” was accidentally labeled “Frop Dead” – that’s never been topped, for me.
J: There’s a band from Sheffield called Toucans (Lisa and Adam from the band are playing on the Warmhammer songs) that released a cassette called Welcome To Lovers House. Adam did all the artwork with a pink felt tip pen and it looks wild. Buy it from Loose Hair.

What’s the best mix cassette you ever gave/received?
R: Never been given one but probably the ones I made when I was a kid where I sang along to the radio.
A: I recorded the audio from the entire South Park Movie to cassette once, didn’t give it to anyone though.
J: Not sure if I’ve ever had one :(.

Why are cassettes awesome?
R: They are cheap :-).
A: Because they make dull Tory pricks upset about “hipsters”.
J: Because CDs suck.

What cassette release are you most looking forward to this Cassette Store day?
R + A: The Homosexuals 3 tape collection, plus the UV Race and Courtney Barnett ones.
J: UV RACE UV RACE.

Linkedin
RELATED ARTICLES
OTHER ARTICLES
Australian singer-songwriter celebrates the tape in the run up to Cassette Store Day this Saturday, September 27.
Cassette labels across the UK and the US celebrate the analogue format September 27 with new releases, rare reissues, special gigs and all-out tape-themed geekery.
Burger Records founders Sean Bohrman and Lee Rickard reflect on foul-mouthed weirdos, saving lunch money to buy records and 'The Stooge Mobile' of their suburban youth.
Courtney Barnett explains how she conquered the music world from her Melbourne bedroom.
Videos, writing and images from former Sonic Youth frontwoman and Huck 42 cover star Kim Gordon.
Artist, writer and 'zinemaker Jocko Weyland exhibits a collection of his cassettes, 1980-2005, in San Francisco.