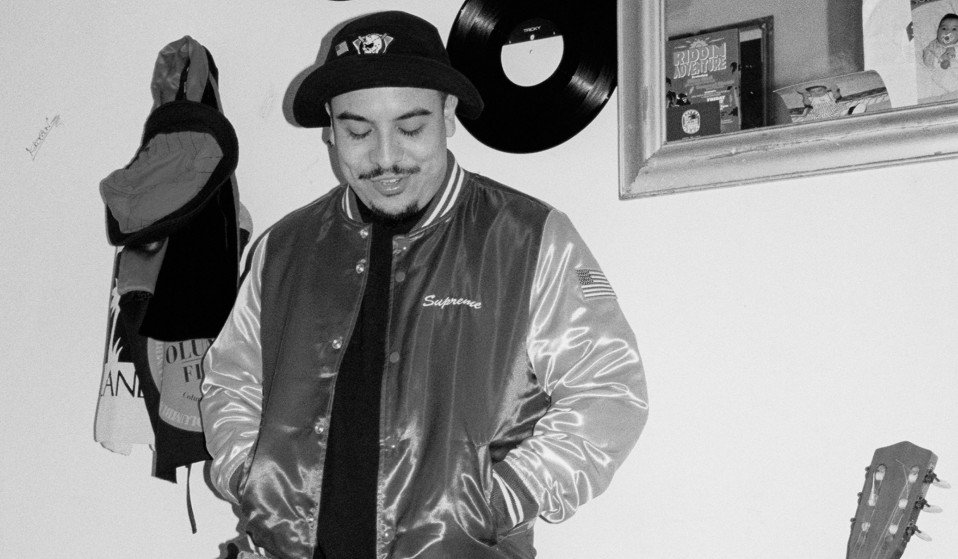 London reggae artist Kiko Bun is destined for big things. After covering Toots and Maytals for This is England '90, he's surfing a dubby resurgence all the way to the top.

London reggae artist Kiko Bun is destined for big things. After covering Toots and Maytals for This is England '90, he's surfing a dubby resurgence all the way to the top.

Kiko Bun is the moniker of up-and-coming London reggae artist Federico Marin – a combination of his shortened first name alongside his favourite method of winding down.

‘Where I’m From’, Kiko’s most recognisable song, initially jumps out as a straight-up reggae tune; yet it incorporates numerous influences from his hometown.

Kiko has stored London’s splattering of styles in his musical DNA ever since he was young. Growing up in North London, his first musical awakening was classical, before turning to salsa, hip hop and then reggae.

A reggae renaissance man, Kiko’s love of other genres feeds back into his sun-soaked sound.

Huck caught up with Kiko to chat about his career so far, reggae and his big plans for the future.

How did you first get into reggae?
I’ve been into music from a very young age. My dad played a lot of dub and rocksteady and rub-a-dub when I was growing up. But as I started to grow I got into classical music – I played the violin for numerous years, and when I got my grade 8 I was in the midst of this big hip hop phase. I started collecting a lot of blues records to sample, bought a PC and started making loads of old school beats. Towards the end of that I was deep in this big reggae phase.

What sort of stuff were you listening to?
It was a lot of Jacob Miller, Dennis Brown, King Tubby and Augustus Pablo – all dubby stuff. And then stuff like The Heptones, and like The Gladiators, just loads of old school stuff. Maybe five years ago I wrote a song rather than a rap, and I got so excited about it that I went on Gumtree and typed in ‘reggae’ just for fun. There was a band called General Skank looking for a lead male vocal, and because I was so psyched about this tune I just sent it over, and they loved it.

I went to meet them and a month later we did this gig. I invited a load of my friends down, who thought it was dope. They were completely in love with the whole thing and really encouraging. Around three years later we had a whole set of original stuff, and did shitloads of gigs during that time. Then towards the end of my time with them I had written myself maybe six or seven of my own tunes under this name Kiko Bun.

What drew you to the London reggae scene when you first started out?
I just wanted to hear it as much as I could. I always wanted to hear it very loud and shit, go sit down with a beer and hear it booming. You had DJs coming to guest on soundsystems, and I used to go and check them out. It became such a routine that before I knew I was at least two days every single week I’d be at a soundsystem just listening to reggae. Fully just jumped into the whole scene man. Love it.

You’ve already supported The Wailers.
That was a huge, huge moment. I’d recently signed my deal prior to that and this was the first major sort of gig I was doing as Kiko Bun rather than with my band. So it was like… I don’t wanna say deep-end because I wasn’t uncomfortable doing it – I was overwhelmingly excited to have been involved in it and it was a great privilege. I will never forget that. I said hi to a couple of them, but we didn’t have an in-depth convo at all. They seemed really bless though.

From where do you draw you different styles?
I like the whole boom-bap thing, old-school hip hop stuff. I basically love the dutty beat, just like a dusty, cracking bass, drum and just like a really rugged drum break. So I guess I like the drums from hip hop, and I like the violent skank that pierces your ears from old school dubs and shit. I love reggae bass lines in the way they’re triplets. When I used to make beats I’d just make a beat. But now because I’m into the whole reggae thing, sometimes I’ll start a boom bap beat and then I’ll put a skank in it and it just becomes this next thing. I love fusing more than two genres because its exciting at times, because you get the tempos right.

Do the different London scenes play into your music?
Yeah definitely. Living somewhere like London, you can walk down a place like Portobello Road and you start at the top you can hear some folk music and then a minute later you’ll hear some dancehall and then some jazz and then some hip hop and then some reggae – there’s always something for someone to be attracted by musically. I think its just everywhere man.

Is there a reggae resurgence going on at the moment?
Yeah I do think there’s a revival. I think that reggae’s been tucked under the rug for a while now, but things are starting to pop up. Obviously you’ve got those two massive artists from Jamaica – Protoje and Chronixx – and it’s caught on in London massively. I remember when I started going to this place on Stockwell Road in Brixton called The Queen’s Head, and every Wednesday they had a reggae night. I was there every single Wednesday for like two years without fail. When I started there was a real community vibe, just the old cats sitting in there. And then after some time they were charging people to get in and it was just full of youngsters. It really caught on, but yeah its definitely bubbling.

You were involved in the soundtrack for This Is England ‘90. How did that come about?
My manager said to me we’ve got this really exciting opportunity for This Is England ’90. They wanted me to remake Toots and The Maytals’ ‘54-46 Was My Number’ and I was like ‘rah sick!’. They put me in the studio that I’d used quite a lot, so I sat there and did this instrumental by myself, playing it all. But I wanted to get bars in it, so I called my bar section and got them in. We had a giggle and we got loads of nice lines down. I managed to do the whole thing in a day. So we finished the tune and they used it. I love the original movie – I actually watched it the other day. I was in such a mood with all the This Is England stuff happening.

What’s next on your plate?
I’ve got my UK tour that starts on 16th November, which is my first tour. I’ve gone an album coming early summer next year, and I’ve got an EP in a couple of months. Then we’ve got a few singles lined up. I’m just working on loads of stuff anyway – the way I write music, it’s not like I need to complete something. Now that I don’t need to work 9 to 5 I can focus on the music. Even if the album’s almost done, let’s say, I’ll still be making more tunes. I work constantly – a couple of months back I took a second and thought to myself I’m actually working really hard, and I didn’t really see it like that at all before. I still don’t see it like that.

Kiko Bun’s ‘Sometimes‘ is out now. Check out his upcoming tour dates.

Linkedin
RELATED ARTICLES
OTHER ARTICLES
Photographer Jack D. Teemer travelled through US cities to create a vivid document of a region in decline.
A series of photos by the late Jerry Dantzic taken in 1957 show a tender side to the iconic Jazz musician.
Ahead of the release of his new album, the producer reflects on his battle with drug use, getting into painting and what Madonna taught him.
As the Criminal Bar Association enters its fifth week of action, criminal barrister Russel Fraser explains why the legal professionals have walked out and how action is likely to escalate.
A new series of photos by Johny Pitts shines a light on communities and subcultures that have all too often been overlooked.
From the chip shops, to the bingo parlors and burlesque dancers, photographer Mike Coles remembers capturing scenes of holidaymakers by the English coast.