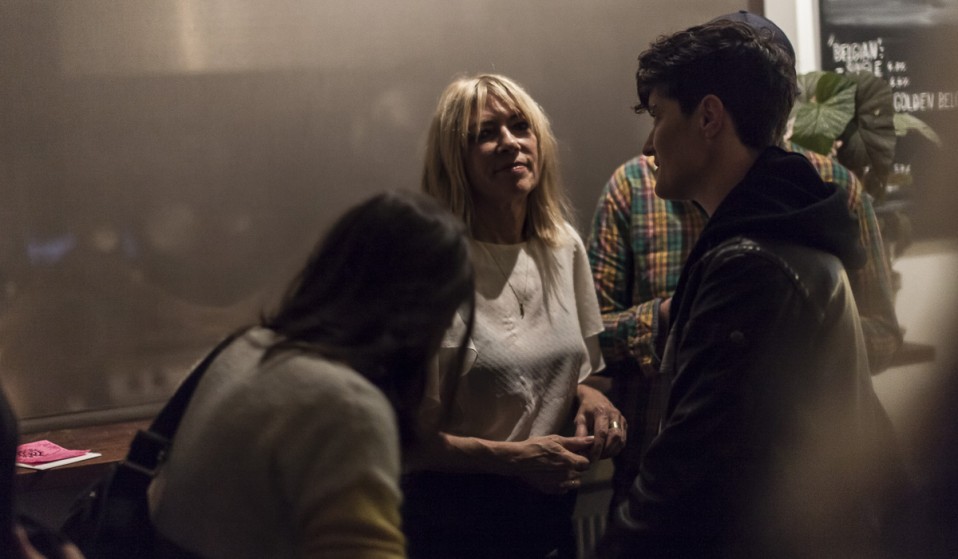 Words of wisdom from Kim Gordon, in conversation with music journalist Miranda Sawyer, in Camden, London.

Words of wisdom from Kim Gordon, in conversation with music journalist Miranda Sawyer, in Camden, London.

As Kim Gordon’s autobiography Girl In A Band continues its crusade around downtown social media, in a #breaktheinternet moment grrrls have been waiting for forever, the protagonist of her own life story popped up in London last night for a book launch and q&a with music journalist Miranda Sawyer.

It was a sold-out event with an enraptured audience, full of tense and humorous moments. One highlight was hearing Kim explain how much The Slits had influenced her in the presence of a beaming Viv Albertine, who sat out of the limelight on the back row.

Here are some other great moments.

“We were in the studio recording and Public Enemy were there recording so we asked Chuck D if he would do a cameo on the record,” said Kim in answer to a question from the audience. “And he was waiting around for Flava Flav for like two days, so he was like, ‘Yeah sure!’ It was funny because he went in and did some really cliché things like, ‘Word up!’ And we deserved all that! […] Basically the song was about how you have expectations of whoever your idol is. You project all this stuff on them, like, ‘What are you gonna do for me? You gonna liberate us girls from male, white corporate oppression?’”

Despite the 2008 compilation album Hits Are For Squares, the band weren’t actively rejecting commercial success. “Did the band want a big hit? Well, yeah!” she said, which made everyone laugh. “But we never sat around and thought about writing a big hit. That didn’t occur to us. After you’ve been around for a certain amount of time it doesn’t matter what kind of a record you put out because people are always looking for the ‘new thing’ whatever that is. The whole notion of ‘re-invent yourself’ – that’s easier said than done. And it’s kind of a weird idea. We wanted to change our name at one point to Washing Machine, because we had so much baggage. But the record company wasn’t into that. Not good for the brand.”

Kim is kind of into astrology

“I’m somewhat into astrology,” she told a metaphysical questioner in the audience. “I like this one friend who’s an astrologer. Everything he’s ever told me has been true. He said this month I have fifty planets in publishing [everyone laughed]. On the cover of my book I’m wearing a Taurus t-shirt. But according to my astrologist it’s really all about your rising sign, and mine’s Capricorn. Apparently most ambitious women are Capricorn.”

LA is part of Kim’s DNA

“There was a certain freewill aspect to growing up in LA and being able to ride your bike around at all times of year,” she said when Miranda Sawyer asked about the city’s influence on her. “It’s always nice out so you can always go outside. We used to play in these dirt mounds that became freeway off-ramps. Recently I went to this outsider art fair at Paramount Ranch, which is in the valley near Calabasas, where the Kardashians live. We were on this old set, it was dry and it smelled like dirt, and it reminded me of my childhood where, even in the suburban neighbourhood, you could still access this feeling of the city.”

We take music for granted

“Music is so important to people,” she said when Miranda asked about surviving as an artist in evermore corporate cities like London and New York. “It’s something people take for granted, like air or water. Like we should have it, we have to have it. It’s like this parallel emotional life that is there when we need to tap into it. But there really is no place to worry about it. It doesn’t seem appropriate to worry, ‘Where’s it coming from? Who’s gonna make it? How are they going to afford to do that?’ There’s no place for that because music comes from a place of ‘no good reason’. There’s a desire to do it and you make it happen if you want it to.

Linkedin
RELATED ARTICLES
OTHER ARTICLES
Kim Gordon first came to us in the 1980s, as a member of Sonic Youth. But her belief in self-taught creativity would inspire generations to come.
Filmmaker Tara Subkoff explains the impetus behind her beautiful short for MOCAtv – the YouTube channel for LA's pre-eminent contemporary art gallery.
Videos, writing and images from former Sonic Youth frontwoman and Huck 42 cover star Kim Gordon.