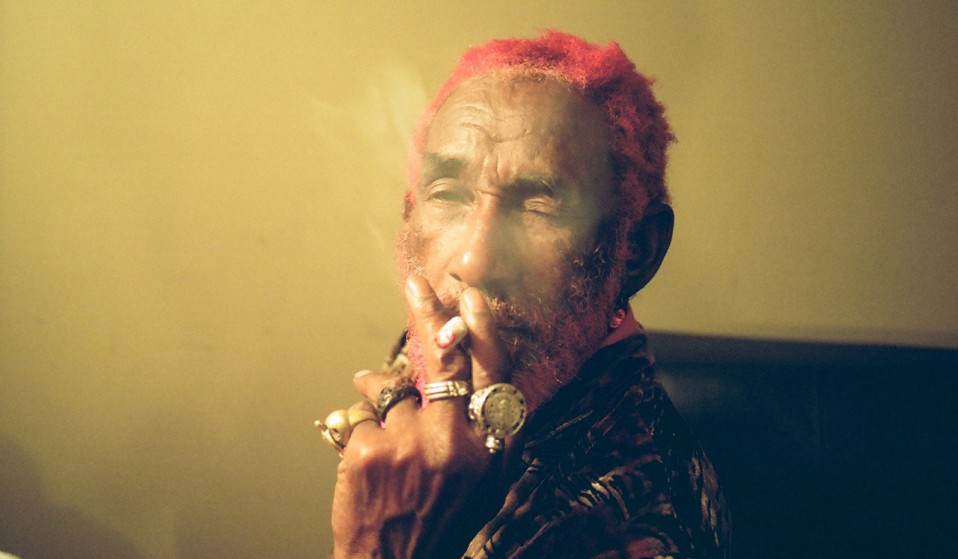 That’s just a tiny sampling of a conversation with Lee ‘Scratch’ Perry, the Jamaican producer who helped foment reggae’s era-defining sound. It is a journey through absurd non-sequiturs, mangled metaphors, bizarre imagery. This is a man who once told an interviewer that he was 75,000 years old and came from the planet Sirius. In our time with him, trying to decipher his molasses-thick accent over a crackly phone line to Jamaica, that little quote about the sands of time was one of the few things we actually understood.

And then he laughs. Perry has the most wonderful laugh, deep and throaty. It’s a laugh that says, I’m having the time of my life.

Reggae is a complex, dazzling, idiosyncratic thing. Even something as ubiquitous as Bob Marley is stuck deep into the bedrock of reggae history, fraught with meaning. The genre is full of wild personalities, crazy feuds, obscure slang. And Lee ‘Scratch’ Perry is the craziest, baddest personality out there. His nickname is The Upsetter, and even at seventy-nine years old, when he’s more focused on painting than he is on music (he recently exhibited his work at the Firehouse Art Collective in Berkley, California), he is still a ferocious preacher – wild, free, chasing his own gospel. His shamanistic presence is captured in The Upsetter, a documentary narrated by Benicio Del Toro that explores his influential past.

Perry started in music in the ’50s, working as a janitor and handyman in studios headed by ska producers Duke Reid, Prince Buster and Coxsone Dodd. The man born Rainford Hugh Perry soon blazed his own path, and helped establish reggae as a genre, in the late ’60s and early ’70s, producing, recording and ghost-writing songs and performing with his own band the Upsetters. But his name, at the time, didn’t make history.

“Me have a lot of songs that they take from me,” he says in The Upsetter. “Not even my name was written as the writer. They just take them because me is a country boy and me can’t say anything otherwise they’ll beat me up… For me to survive me have to find something for myself.”

In 1973, Perry established Black Ark, a backyard studio in Washington Gardens, Jamaica, armed with the most rudimentary equipment. Bob Marley, the Heptones and Max Romeo all recorded there. “I started Black Ark because I needed space to make music,” Perry says today. “I go to downtown one, man, and come back from downtown. One of my [session musicians] was in the back room having sex. Every time I put something in the studio, people were doing coke. People were going to buy coke. That mean destruction. So I started my own studio.”

A tipping point came with 1968’s People Funny Boy, a song marked by its slower rhythm that bridged the leap from ska to reggae. By the mid ’70s, he’d given birth to dub. Since then, he’s been a musical hell-raiser, pioneering lo-fi production techniques – using a mixing desk and four-track to create layers of sound – that were adopted in the ’80s by hip hop producers in the Bronx. (He also, if you believe the stories, burned Black Ark studio to the ground himself in 1983 – although other sources blame an electrical fire.) His last album, 2014’s Lee ‘Scratch’ Perry Back at the Controls, was typically forthright – but, he says, he’s nearly done with music. “I took much comfort in the album I released [last year]. I’m going to make one more album, and that’ll be it. No more for me.”

Lee ‘Scratch’ Perry’s Vision of Paradise is out February.

Linkedin
RELATED ARTICLES
OTHER ARTICLES
The situation in Afghanistan remains dire, with many groups facing persecution at the hands of the Taliban.
The government is scrapping the Human Rights Act in a move that will hit marginalised people hardest.
Government plans to make it harder for people to go to university will only entrench inequality.
A new documentary explores the government’s efforts to quash the protest movements of the late ‘60s by any means necessary.
The revered showbiz chronicler recalls his journalistic beginnings, documenting subcultural scraps in the ’80s.
New legislation is set to make it more difficult to hold Israel accountable for its human rights abuses.