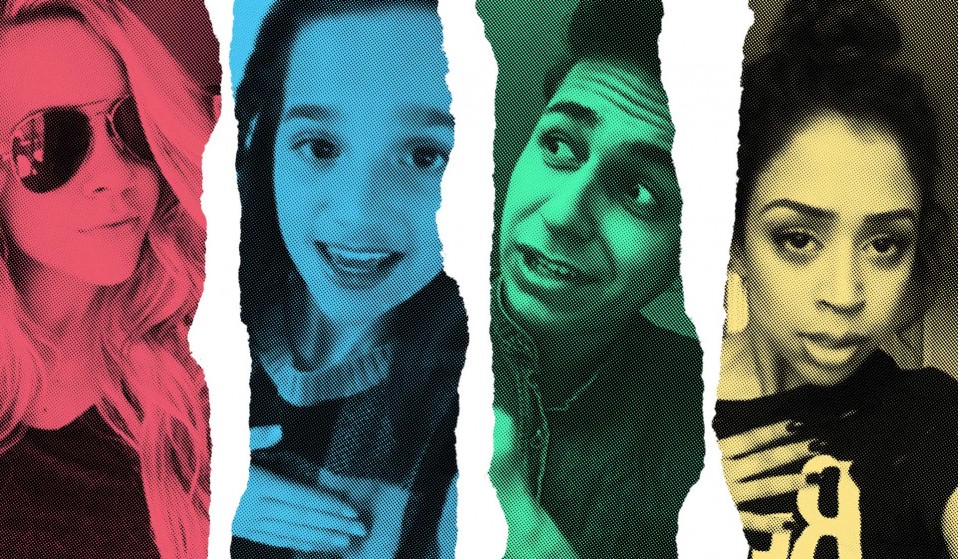 Touted as the biggest change to music since the video, a fast-growing app is resonating with millions of teenagers in the form of disposable karaoke videos.

Touted as the biggest change to music since the video, a fast-growing app is resonating with millions of teenagers... in the form of disposable karaoke videos. Will it prop up sagging sales? Or is it just a vehicle for narcissism?

Imagine a teenager in their bedroom, posing in front of a shaky camera while mouthing the words to Drake, and you’ve pretty much got what Musical.ly is all about.

It’s a social media app that allows users to upload 15-second videos of them lip-syncing and dancing along to songs, creating a world of cringe where selfies collide with karaoke.

That may sound like the most vapid waste of time imaginable, but its exploding popularity poses serious potential for the music business.

The app has gained 90 million users in just two years – including half of all American teenagers, according to Alex Hofmann, president of Musical.ly North America. In May, the platform raised $100 million in investment after reaching number one on Apple’s App Store in 19 different countries.

“It’s finding a massive audience among teens and young people who aren’t really being reached through other media,” says David Emery of Kobalt Label Services, who oversees global marketing strategies for the likes of The Strokes and Nick Cave.

“They haven’t necessarily grown up watching TV shows or listening to the radio. The reason we’re seeing short, disposable content generated by users across a bunch of different apps is because that’s how this younger audience wants to consume content.”

The music business, of course, is already working this to its advantage. As record companies like Warner Music are discovering, licensing your catalogue to the platform generates invaluable exposure.

Every available snippet is an entry point. Songs that gain traction on Musical.ly, like Black Coast’s ‘TRNDSTTR’, can quickly do the same on iTunes.

After the singer Ariana Grande joined Musical.ly in May, she launched a campaign on the platform for her single ‘Into You’ which led to 150,000 videos of fans singing and dancing to the song in just the first day. Now the likes of Britney Spears have followed suit, appearing on the app to encourage ‘interpretations’ of their music.

Then there’s the app’s native stars, who have risen to prominence purely as a result of Musical.ly (you can record your own audio, so it’s not all about lip-syncing). The ability for videos to trend means that it has the power to break these personalities overnight.

8) honestly I wish I never saw this pic.twitter.com/05wiQeciEU

Jacob Sartorius, a 13-year-old from Virginia, posts three times a day to over eight million followers.

He quickly transitioned from lip-syncing videos on Musical.ly to releasing his debut single ‘Sweatshirt’, which reached the iTunes Top 10. He’s now represented by the United Talent Agency, whose roster includes Kanye West.

If you’re wondering, ‘What the hell is wrong with the world?’ at this point, there’s a simple explanation. Fifteen percent of American children aged between six and 12 record videos on a digital device at least once a week, according to research by Smarty Pants – a consultancy focused on youth and families.

About three-quarters of Musical.ly users are female, the company claims, which presents an enormous market for teenybopper heart-throbs. 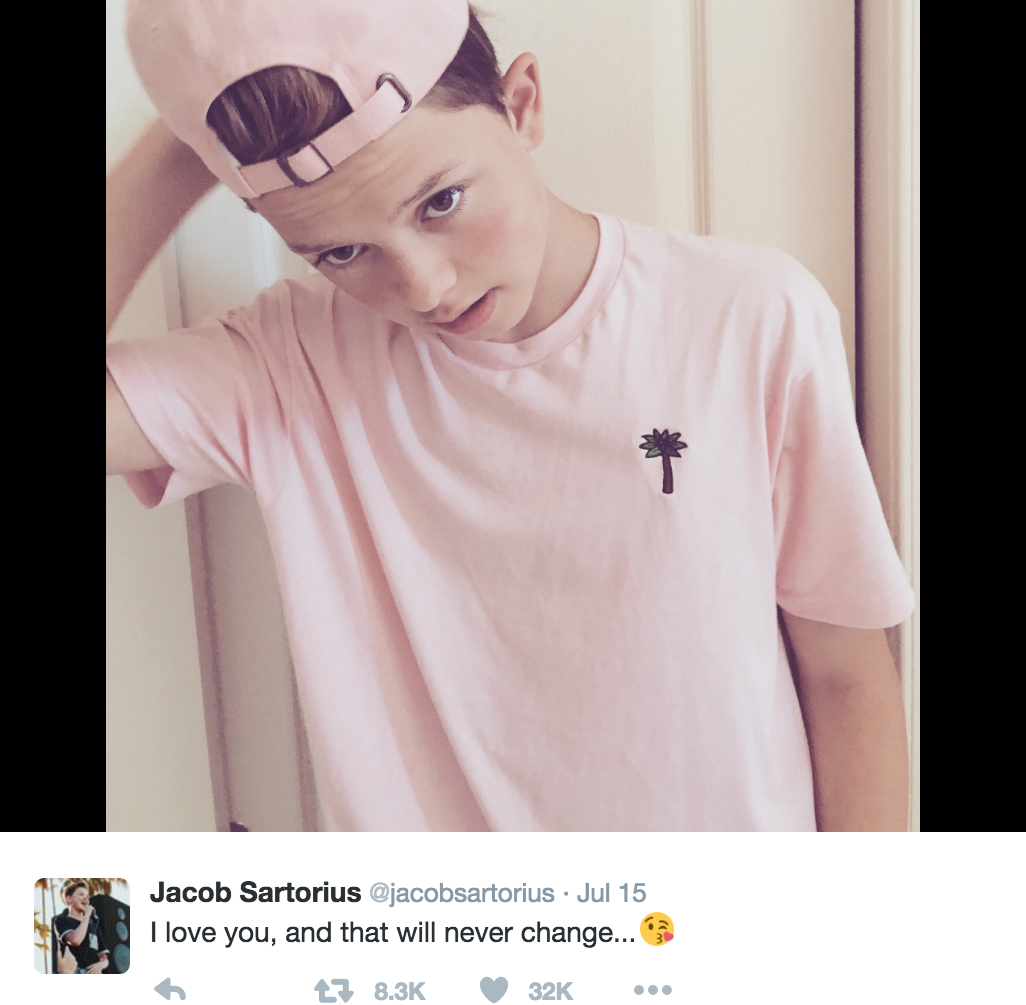 Forget posters of teen icons plastered across bedroom walls. Now the stars can appear directly on your phone, eliciting a connection that feels personal.

And here’s where the cringe factor comes in. Musical.ly is littered with tweens lip syncing to songs about drunk texting and being “a freak in the sheets” – kids seemingly oblivious to the words they’re pretending to sing.

It’s what prompted Bryan Le (better known as RiceGum) to post a series of videos to YouTube titled THESE KIDS MUST BE STOPPED, lambasting the inappropriateness of it all – and generating millions of views in the process.

“I’m gonna get locked up [for watching],” he says in one comment. “If my parents walk in on me, dude… there is so much explaining to do.” Though Musical.ly is intended for ages 12+, it represents a first foray into social media for many below that age.

Users can change their settings to private and approve followers as a safeguard from unwanted attention. Beyond that, there’s only so much any platform can do to control its content.

But when it comes to navigating the app’s spectrum of success – veering from irrelevent to ‘Hollywood’ (i.e. too big to respond to fans individually) – Musical.ly is doing what it can to mentor its younger stars.

That can mean reviewing contracts, hooking them up with agency representation and developing monetisation schemes that may allow financial independence.

“What’s interesting is that you can be a music star and reach a massive audience, making significant amounts of money, without necessarily pushing anyone towards a purchase.

“And if you’re 14 years old, you probably can’t do that anyway because you don’t have a credit card,” says Emery, who expects prominent Musical.ly users to eventually earn the kind of income that high-profile YouTubers bring in (up to $12m a year).

4) this girl is too much and why did she open her mouth like she had a grill pic.twitter.com/g5lobNeIIS — Alex Romero (@whosalexander) June 29, 2016

Platforms like Soundcloud, he adds, have a way of developing into ecosystems that are sizeable but self-contained. Trying to make an impact beyond that is a different challenge entirely.

“Being big on one platform doesn’t necessarily make you a star,” says Emery. “You may have a gift for making 15-second videos but that doesn’t mean you have a gift for making a single or even an album. It can put you on that path, but transitioning away from a platform like this into the more traditional music industry is notoriously difficult.

“How many YouTubers have actually taken that step from being massive on their platform to finding wider success? Not many. I can see the same pattern emerging from this.”

Linkedin
RELATED ARTICLES
OTHER ARTICLES
A new film from Berghaus traces the story of Adam Raja, who left behind a turbulent upbringing to discover the healing power of climbing.
After blocking the Scottish government’s gender recognition reform bill, Westminster is now devising further changes to the law to make it harder for trans people to self-identify.
Author Edward Banches dicusses his new book, which examines the hard rock and metal scenes in five African countries: Botswana, Togo, South Africa, Kenya and Ghana.
Social prescribing connects people with non-medical support to improve their health and wellbeing – but some experts worry it’s just a stick plaster solution.
Activists and campaigners are fighting back against new laws that would seriously undermine the ability to take industrial action, calling it an attack on fundamental workers' rights.
After building his reputation covering the US civil rights movement in the 1960s, the photographer went on to produce some of the most enduring images of the past century.