Art & Culture / Music / ‘You’re either for helping others, or you’re not’ 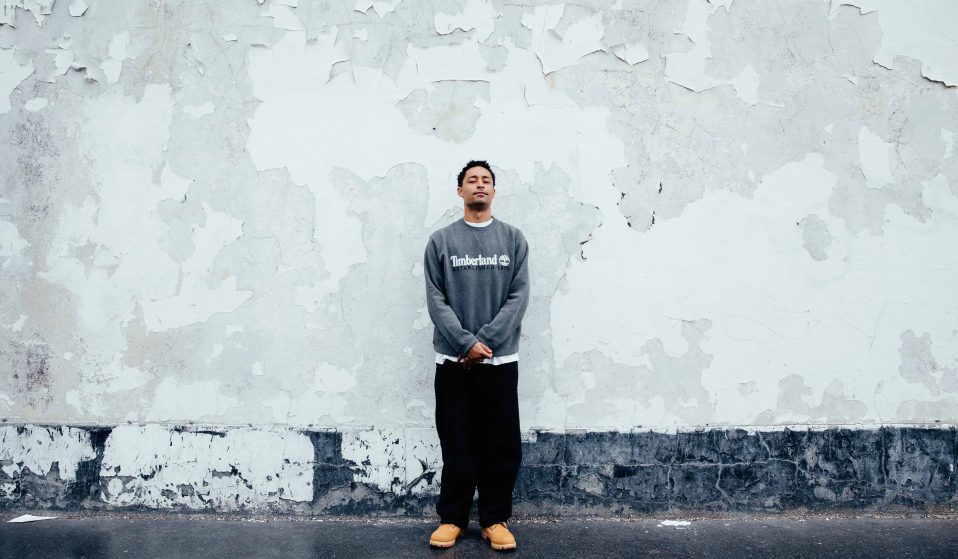 Carner recently helped ‘re-green’ an area in his native south London. To mark its opening, he tells us about the impact it will have on the community.

The London artist recently helped ‘re-green’ an area in his native south London. To mark the opening of the new space, he talks horticulture, helping out and why Boris Johnson should be particularly wary of an impending apocalypse.

It’s a crisp September morning, the kind that signposts the tail end of summer, and Loyle Carner is giving a quick lecture on horticulture. “I actually get down with plants, man,” he says, a wry grin offsetting his distinctive sleepy cadence.

“I’ve got loads of veg in my garden – kale, tomatoes and stuff. I just feel like if the world’s about to fucking end, then I might as well be able to grow some vegetables. You should get some kale. Kale doesn’t even need sun, it just grows. Also, there’s a whole thing with plants, if you starve them instead of giving them water every day, they’re actually more fruitful. So you should treat them mean. They work harder.”

It’s been a busy few months for the London artist (real name Ben Coyle-Larner), even if there has been more time than usual for gardening. There have been no shows, no festivals to play, but Carner has been able to write and record from his place in Hackney without the pressures of a traditional schedule. In short: it’s been a welcome change of pace. He’s one of the lucky ones, he acknowledges.

That said, a large chunk of his time has been spent on a separate venture entirely. In a project that has seen him unite with London National Park City, Urban Growth and Timberland, Carner has been helping to ‘re-green’ a new community space in the Thornton Heath area, close to where he grew up in Croydon. The process saw a group of volunteers come together to regenerate the area via public landscaping, installing seed beds, plants, trees, as well as a seating area where locals can kick back and enjoy a bit of peace and quiet. 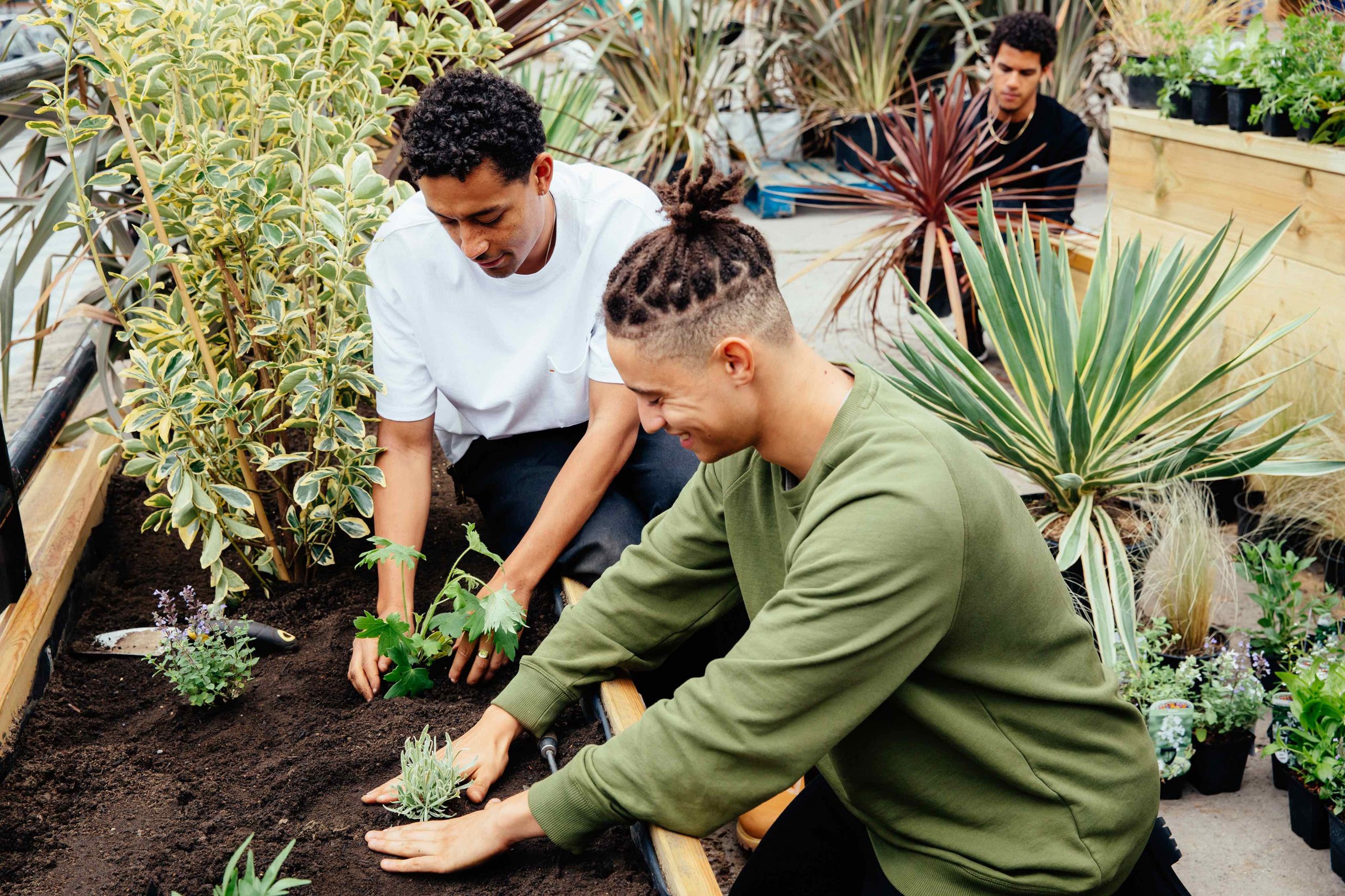 The collaboration, which forms part of Timberland’s Nature Needs Heroes campaign, happened fairly organically. “I’d actually already been thinking about it,” Carner says, perched on a sofa in his living room. “I just tweeted out like, ‘Yo, I’d love to help green out some places in south. Because I was driving through [the area] and to me it just looked a little bit grey. So I was like, ‘What can be done?’ Then Timberland got in touch and our ideas aligned.

“We went to meet up with everybody from National Park City, Urban Growth, Croydon City Council,” Carner continues. “It was wicked, we had this conversation where everyone wanted to do the same thing.”

At first, there was talk of focusing their re-greening efforts on east London, but Carner was adamant it needed to be south. “I feel like that’s a place that hasn’t had as much money pumped into it, especially down in Croydon,” he explains. “It’s a lot more forgotten.” An abandoned tennis court in West Norwood, right at the end of the road he used to live on, was identified, but a group of, “money-hungry contractors” swooped in before them and bought the space to build flats. Luckily, though, the Thornton Heath spot, just opposite the train station, soon revealed itself as a worthy successor.

The new space will operate as a community square, where locals can access nature without having to travel too far outside of the neighbourhood. This is an idea close to Carner’s heart: when he was a kid, he’d spend hours in the park with his mum, but getting there meant driving or having to catch a bus. They were fortunate enough to have a modest garden at home, too, but that was very much an anomaly in his circles. “I’ve got loads of friends who grew up with even less than me. And I didn’t even grow up with that much.”

That kind of disparity was even more obvious to him than usual during lockdown. In April, with COVID-19 cases rising, London councils began closing parks. This period coincided with a spell of warm weather, meaning that people without a garden or nearby comparative green space were limited in their access to the outdoors. It kickstarted a timely debate regarding the sinister new politics of public space, and who exactly gets to access it.

“It’s a dangerous cycle we can become caught in,” he says, growing animated. “You see people all living on top of each other, six or seven family members in one two-bedroom flat, and they’re trapped… it’s not human to be in a space like that. The people who are making the decisions, if they were stuck in a house with their mum, their dad, their uncle, their four brothers – they’d be pissed.”

Of course, the people in power will never have to deal with such a problem. “Well, you never know, man,” Carner shoots back. “With so much changing we might go into Walking Dead mode. If that happens, and I catch Boris Johnson? Come on.”

During his time as a public figure, the 25-year-old has never failed to let people know where he stands. (In 2019, he performed at Glastonbury wearing an ‘I Hate Boris’ tee.) Nor has he ever had an issue with lending his time to community projects that allow him to – as he puts it – help change the world around him for the better. But he stops short of calling himself an activist. Both his mum and girlfriend are teachers: if he’s an activist, he says, then so are they. As are nurses, people who volunteer at food banks, and so forth. “You’re either for other people as much as yourself, or you’re not.” 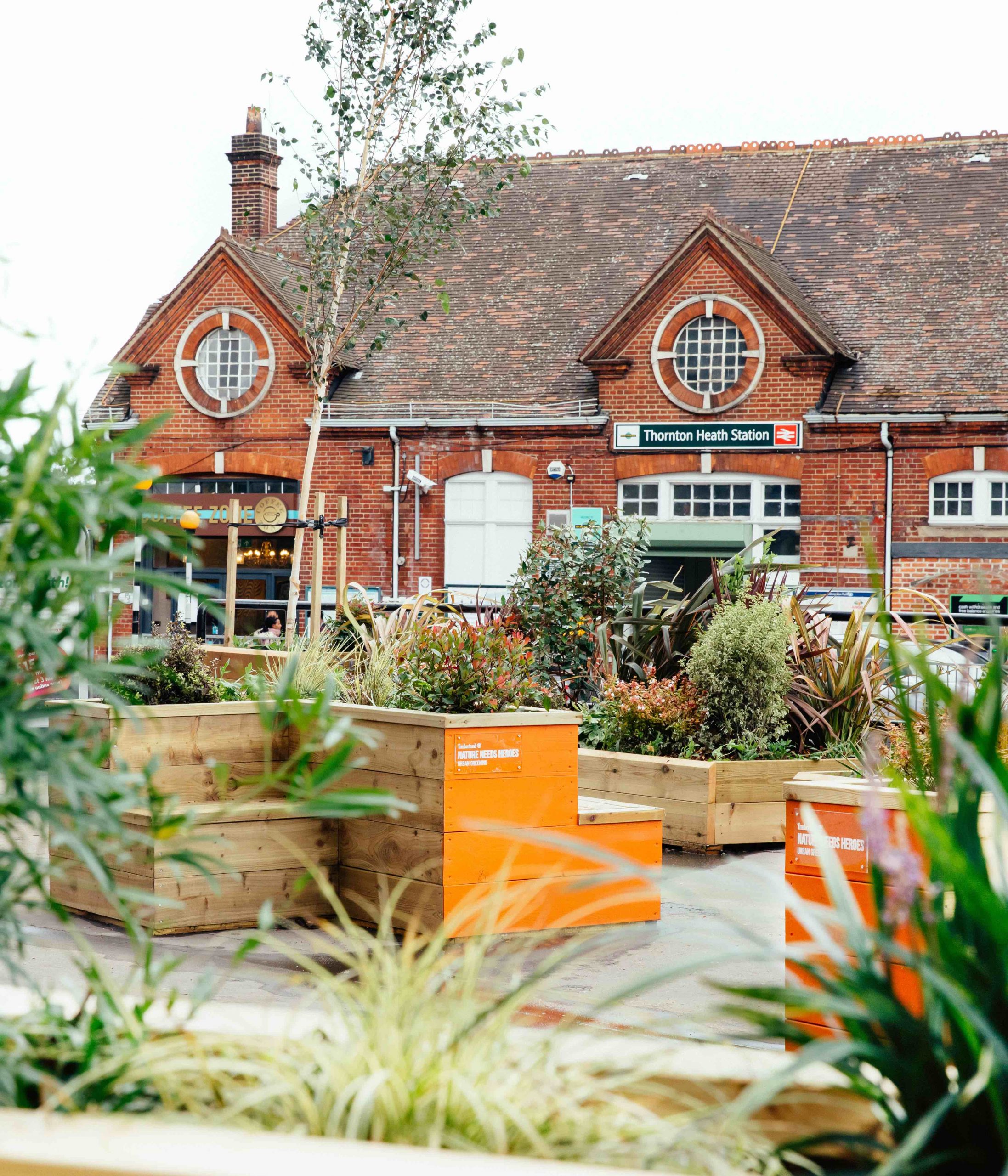 Chilli Con Carner, the cooking school he runs for kids with ADHD, is a perfect example of this mantra in practice. For Carner, who grew up with ADHD, it’s simple: if he can give something back, then why wouldn’t he?

“The thing that always blows my mind is how fucking easy it is,” he says. “Kids are easy! I’m still basically a kid. Working with kids isn’t this [difficult] thing that everyone [says it is], especially kids from ends, kids from areas where not nice things are happening. They’re young, they’re innocent.”

“Just because they’re being painted as these awful creatures that do awful things, it’s not a fact. You could put the nicest, most beautiful, well-behaved lion in a cage and whip it every day. When you let it out, it’s going to eat people. It’s not the lion’s fault. If everyone says, ‘You’re a fucked up crazy lion,’ then he’s gonna say, ‘Yeah? Am I? I’ll show you crazy.’”

There’s plenty more he wants to get stuck into. Recently, he’s been having conversations with Black Minds Matter, an organisation aiming to connect Black individuals and families with free mental health services across the U.K. He’s an advocate for free counselling services in schools. “Where my missus teaches, kids are getting killed, so kids’ best friends are dying. You walk into school one day and someone’s like, ‘Where’s so and so?’ and he just didn’t make it home the night before. Then that kid is expected to go on and achieve greatness at school, and make decisions that are going to affect the rest of his or her life. It’s impossible.”

The conversation returns to the Thornton Heath space. Carner has always felt comfortable in nature, but the racism people of colour often experience in the countryside is well-documented, and something Carner acknowledges. He talks about how, as a kid, he loved getting out of the city and camping with his cousin, who worked on a farm. Upon his return, he’d tell his friends how much fun he’d had, but they’d reply, ‘What are you going camping for? That’s what poor people do.’ While he laughed it off at the time (“I was like, ‘Yo, maybe I am broke, but I enjoy it!”), he realises today that it’s part of a larger issue regarding perceptions around who the outdoors is actually for.

“I chatted to a psychologist and she’s done extensive studies on the effects of being out in green spaces on mental wellbeing – [particularly] in the Black community,” he says.

“The reason in the Black community especially that there’s such a negative view on being out in nature is because when Black people came to this country, it wasn’t safe to live in the countryside. If you lived way out in the sticks, there were only a couple of other Black people who had your back. You might just be walking somewhere and get killed, or taken away, or arrested for something you haven’t done. It was always much safer to live in the cities.” 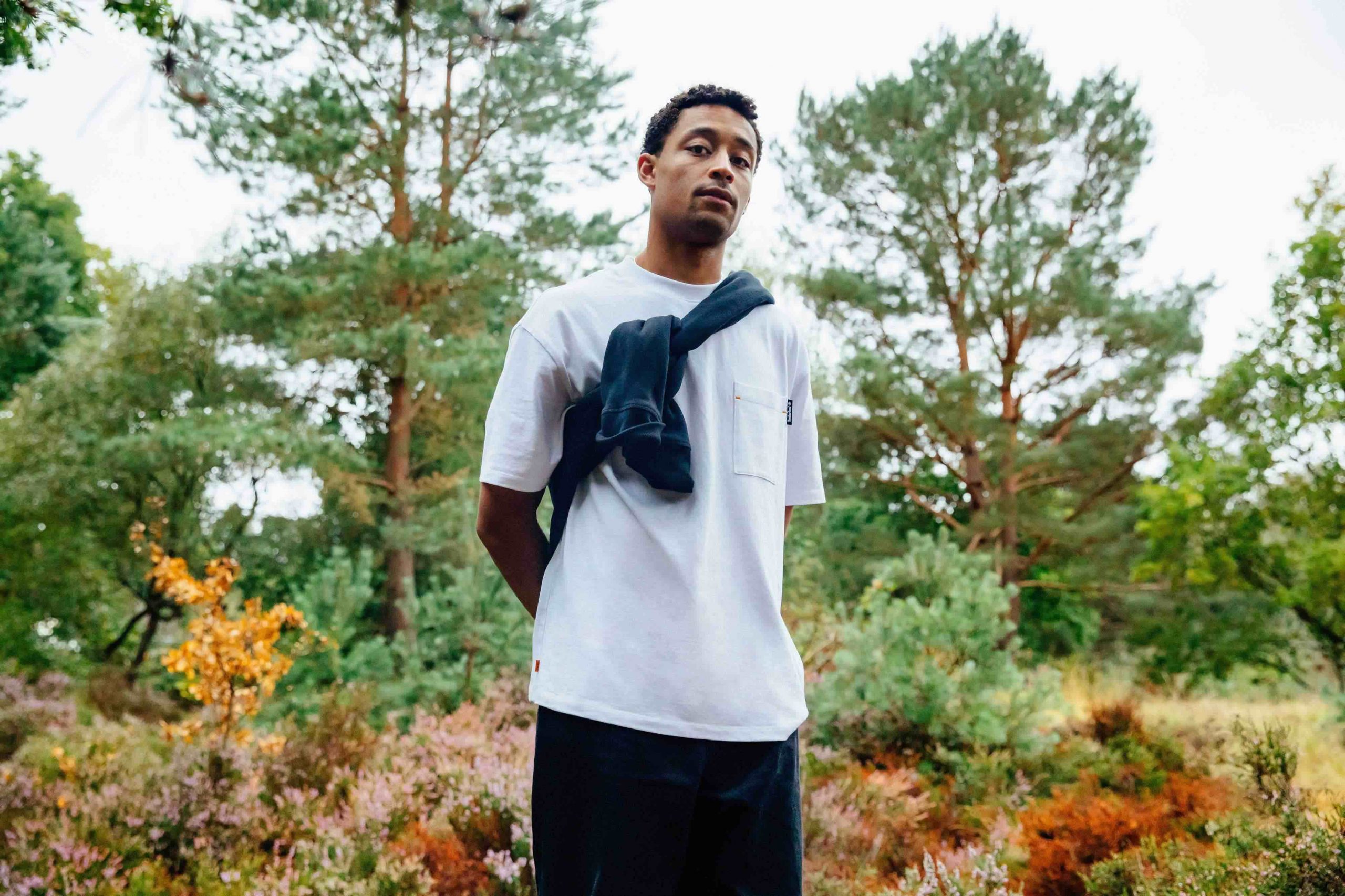 “As the times are slowly changing – painfully slowly changing – I think it’s an important time to go, ‘Look, it’s safer than ever.’ Obviously the times aren’t great, but they’re a lot better than going out and getting killed in the forest for being Black. I think it’s essential to start to shed the skin of the past, and move forward, and understand that there’s so much out there in nature for everyone. Not just for the middle class, or the upper class.”

“You need to connect to the world. Through lockdown I was still on my bike because I was allowed to get my hour of exercise in or whatever. It was like, ‘Yeah, I’m beginning to understand the connection between being outside and feeling good.’ There’s no going back after that, you have to just keep moving forward.”

Linkedin
RELATED ARTICLES
OTHER ARTICLES
The government’s failure to take long Covid seriously has led to the formation of a group campaigning for the thousands of forgotten victims of the illness.
Following the release of his newly republished 1991 book, Redheads, the American photographer reflects on his celebration of ginger people and their magnetic power.
Satirical culture in the UK routinely protects the powerful and punches down. It’s time people stopped laughing along, writes Elia Cugini.
Photographer Phyllis Christopher recalls capturing sex and protest at a time when the city had become a haven for the queer community.
Writers Matt Foot and Morag Livingstone explore how four decades of collusion between the government and the police have slowly eroded our right to protest.
The situation in Afghanistan remains dire, with many groups facing persecution at the hands of the Taliban.