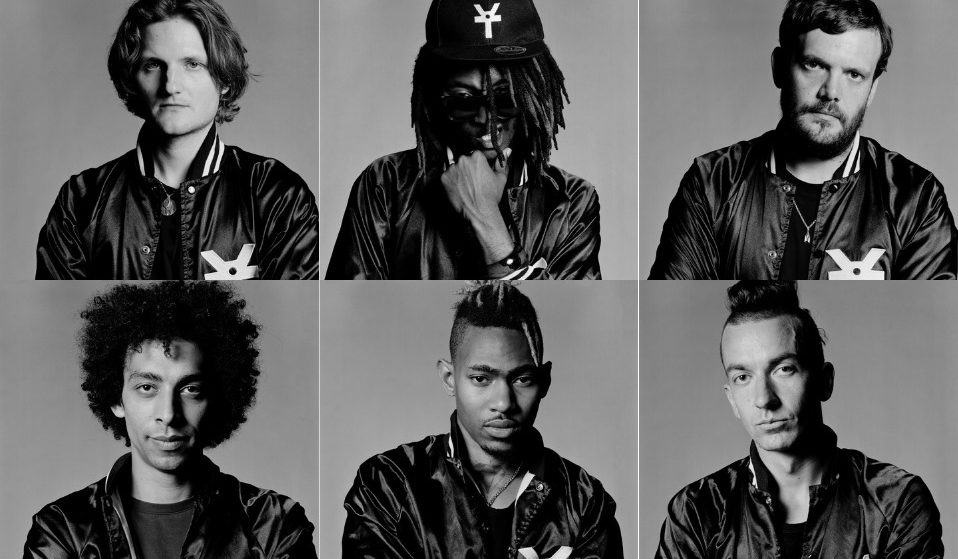 The London hip hop group, formed by members of the Klaxons and Gorillaz, want to bring politics back to mainstream music. We meet them in Kentish Town to discuss Brexit, Kanye West, and the perils of the internet age.

The London hip hop group, formed by members of the Klaxons and Gorillaz, want to bring politics back to mainstream music. We meet them in Kentish Town to discuss Brexit, Kanye West, and the perils of the internet age.

It’s difficult to get all of Youth of the Apocalypse in the same room together.

An indie/hip hop supergroup made up of Klaxons vocalist Jamie Reynolds, Gorillaz stars Jeff Wooton and Seye Adelekan, drummer Jay Sharrock, DJ Twiggy Garcia and New York rapper Young Lazarus, they’re responsible for tracks that merge smart, politically-charged hip hop with sunny radio-friendly hooks – as in their first single, “Drop the Bomb,” which saw them collaborate with MF Doom. But outside of the studio or a gig venue, they’re tricky to nail down as a six-piece unit.

While not all the members materialise in the flesh when Huck meets them at a Kentish Town pub, the ones that do are fine company. There’s Jamie, who is inhabiting the role of the group’s de facto leader, with Jeff its second-in-command – the one to round off thoughts, pop outside for fag breaks and draw attention with his sea-green mohawk. Jay is the group’s quietest member, naturally the drummer, but occasionally breaks in with a charming Scouse drawl.

They’re joined after 10 minutes by Young Lazarus, aka Joshua Lazarus, aka Laz. His arrival inspires cheers, Laz sporting a grill and a pair of shades he quite naturally keeps on throughout the following hour. The baby of the group, and its only American, he’s thoughtful and clear-headed, providing insight steeped in the anxieties and social mores of his generation.

In conversation, the group have an easy, sincere chemistry, imitating each other, finishing each other’s sentences and repeating similar sentiments about the importance of radical art in times of political and social crisis. But often their stances diverge, usually along age lines – being jaded over politics versus being energised, some celebratory over the internet’s ability to get your creativity out there, but others expressing worry over the sheer size of it.

It makes for a frenetic, idea-filled chat for a band on the cusp of greatness – a conversation driven by Brexit, the perils of the internet age, and the lurking presence of Kanye West, a man seemingly on everyone’s minds.

First things first: how did you all meet?
Jamie: I was in Klaxons for 12 years, and I had been basically sitting around waiting for something cool to do until I met Jeff. We wanted to make a folk/jazz album, that was what we agreed on and we were sure it was gonna be great. And when we got together, we were like… let’s not bother.

Jeff: We just started doing stuff for fun, with no pressure. It was like being in school. The Life of Pablo had come out at that time, and we loved it and we were like…

And Laz?
Laz: Jeff and Jamie were out in LA working with a producer that I was working with, and they were looking for someone to join the project. Someone American, from a new background, and who knew rap music a bit more. So that’s how I came along.

What is your shared vision now? What do you hope to do differently with YOTA?
Laz: Youth of the Apocalypse was pitched to me as a project that was gonna be radical.

Jamie: We wanted to make music that was political on a certain level, but also just good music, something created by putting together different strengths. We played at the Old Blue Last in Shoreditch on the night of the referendum, and we were writing the songs in that climate. Everything was put together around that same time.

Our first song [‘Are We In or Are We Out’] was written before the referendum and about the referendum, and it was around the time when Donald Trump was being voted in, and we were very much in a political headspace, and we were writing songs about being alive at that particular time, and trying to reflect that on a personal and global scale. We were very much living on our phones and trying to take in all that information, and trying to put it all into perspective.

It felt dutiful to write stuff about the times we were living in. There wasn’t anything more important to be writing about at that point. 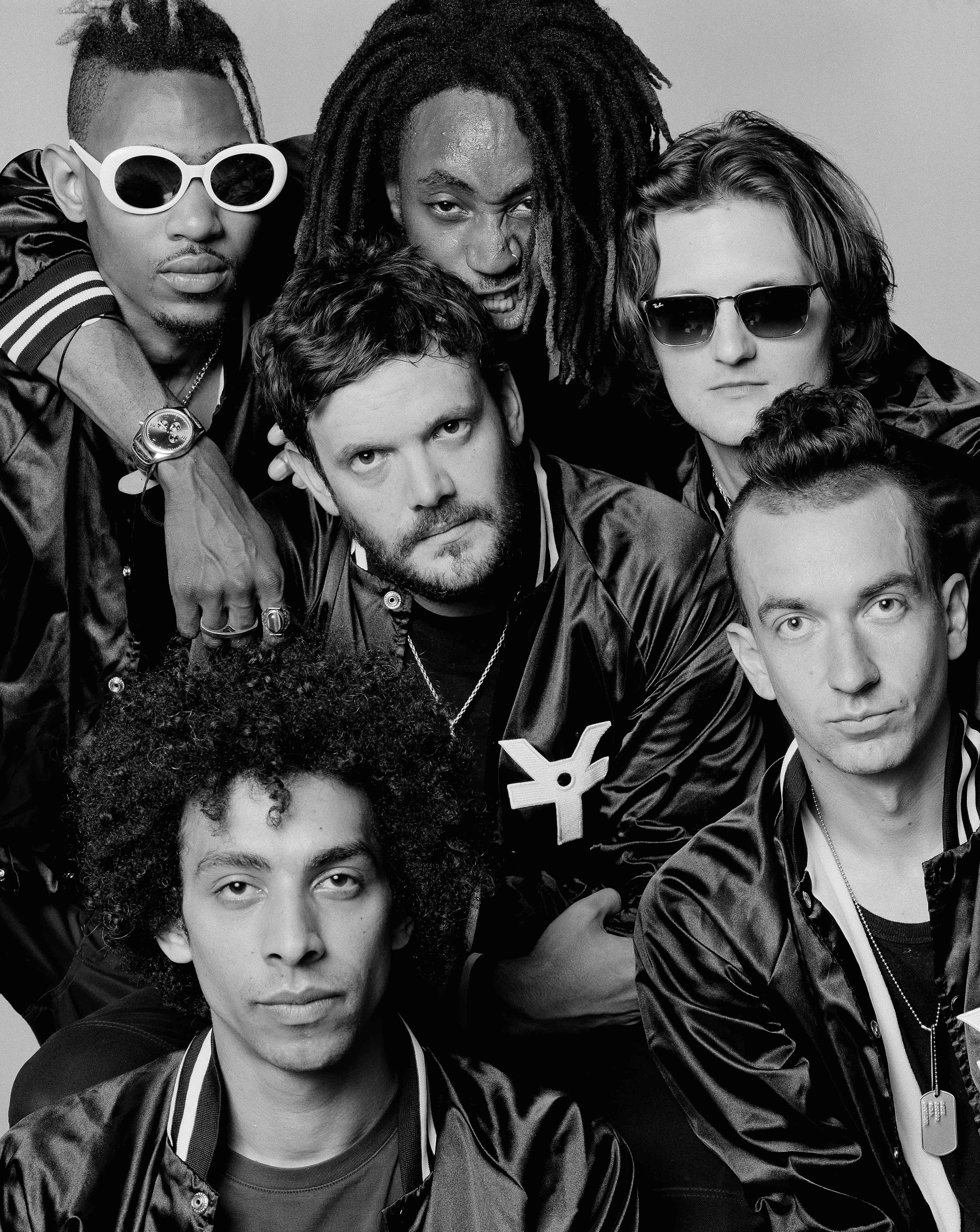 Where were you when the referendum results were read out?
Jamie: We were awake at my house after the gig. But we were very upset, we’d had a good night and then it didn’t go the way that we wanted. It felt like the party was over for the time being, and we didn’t play again for another four or five months.

Is all your music focused on politics?
Jamie: Loosely. It’s more of a reflection of this point in time. We’re not politicians, we’re musicians, so it’s more about personal responses.

Laz: I’m the guy that more relates to the emotional catastrophe rather than the political. With Trump, I was very much like, I don’t care what’s going on there, because I can’t help it. I can’t stop it. I’m starting to care a lot more. But I didn’t care at the time. I cared more about what was going on here. I think England is becoming a lot like America in terms of its views. Everything is becoming like a reality TV show.

Jeff: He ought to make a record in the White House. It’s fucking nuts.

Laz: It’s ridiculous, but Donald Trump’s there. I’d rather Kanye be there than Donald.

Jay: Is The Rock running as well?

Laz: I mean, I’d rather The Rock. He’s a little more sound… Or Childish Gambino. I could see him being a good president.

How have things changed since you first started making music?
Laz: I think the main thing has been the internet. It’s just made everyone have a little bit more input without actually having to get physical. 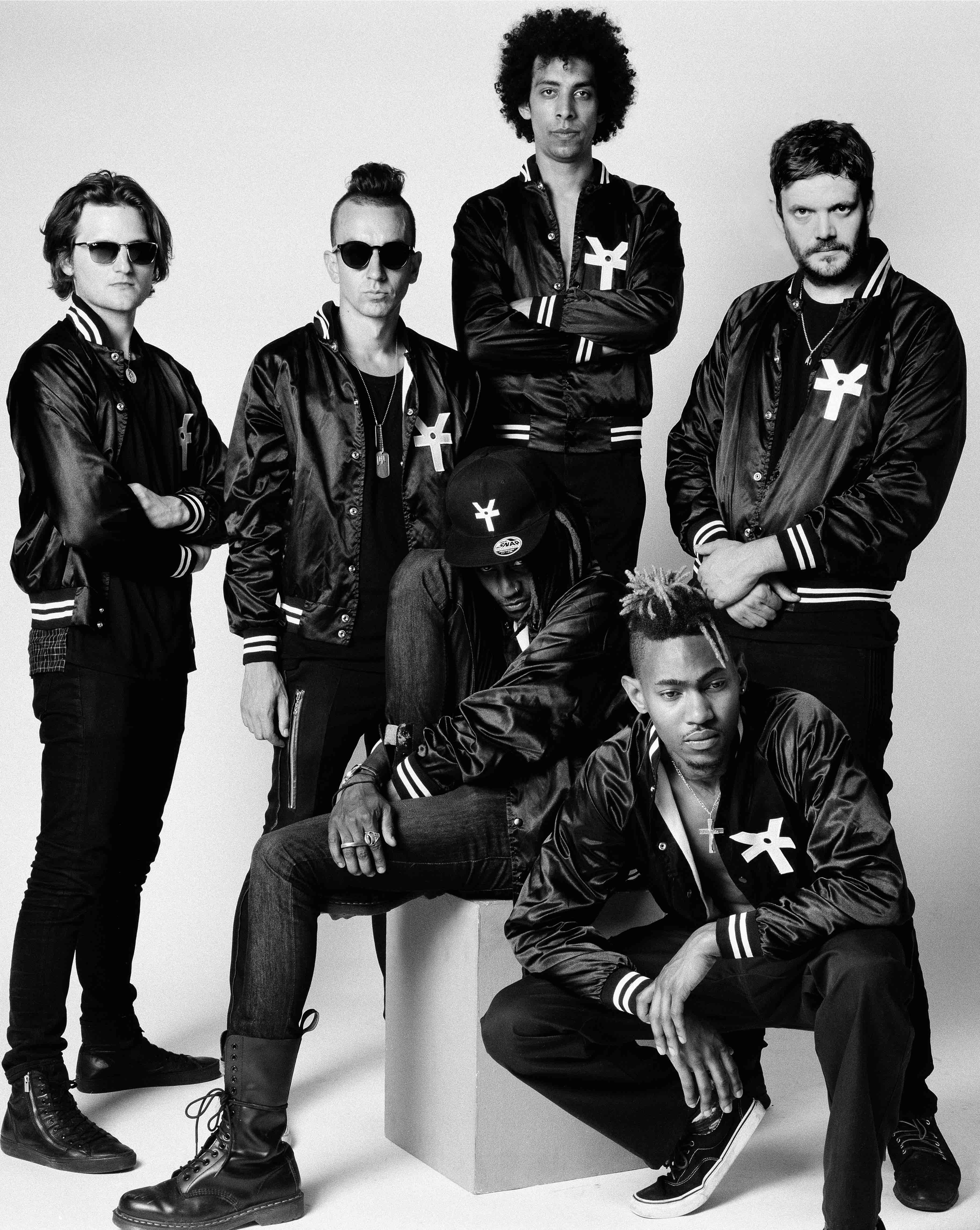 Is that a good thing?
Jamie: It’s a blessing and a curse. It’s definitely taken all the money out of everything. As a band, we’re doing things already that would have potentially earned us a ton of money even as recently as 10 years ago. And it’s not happening.

Jay: Everyone can make up a reason why they’re not gonna be doing what they want to be doing. But times change, and if you’re good enough, you’ll still come through.

Jamie: If you’re good and you put something on the internet now – say you’re an unknown artist, it could blow up overnight.

Jeff: Longevity is the thing, though. Will it still stand the test of time?

Jamie: That’s the thing with the internet, people get bored quickly. The tangible, solid thing, whatever it was before, the method of making money, or a place to meet, has now disappeared.

Where do you think will the industry will go next? How will it adapt?
Laz: I think what’s going to happen next is that they’ll take away the views – they’re going to take away the likes and the numbers. So it’s just going to be based on how you feel, how the music makes you feel, and not about the hype or the clout.

Jamie: That’s Kanye, funnily enough. He was saying that it puts so much pressure on people because of having to compete in the world of numbers.

Jeff: That’s the thing – in 10 years, the only thing that stands is good art. And saying something. I think every great artistic movement is built on those frustrations, whether it’s rock and roll, punk, hip hop…

Jamie: When anything great and powerful has come through, it’s always been because there’s been no choice but to reflect how we’re living. I do think that it’s odd that not many people seem to have been [writing political music] at the time when we were doing it. In rap it’s prevalent. But at the time when we were writing songs, like 18 months ago, it very much felt like, ‘Why is nobody else doing this?’

Jeff: But also musically, with guitar music, I feel that no one’s collaborating with other cultures or other types of people. You can’t keep recreating something from 50 years ago.

Laz: It’s mixing what I like with what Jeff likes, or what Jay likes, all into this one big frying pan. We’re all performers too, so it’s not like there’s just one Beyoncé. We’re like six Beyoncés.

Linkedin
RELATED ARTICLES
OTHER ARTICLES
A new report has found that the majority of Britains approach trans issues with compassion. It’s about time this was reflected by our media landscape.
With inflation now at a 40-year-high of 9 per cent, demonstrations organised by TUC took place to demand action from the government.
Over a dozen Stop Deportation activists locked themselves to each other outside a detention centre to prevent coaches taking those due to be on the Rwanda deportation flight from leaving.
Photographer David Hoffman recalls documenting the extreme wealth inequality around Tower Hamlets and Hackney int the 1980s.
In the latest instalment of Photographers in Conversation, the chronicler of raves, protests and beyond explains why he’s drawn to such specifically visceral environments.
A new edition of a seminal book brings together iconic images of the band onstage in their full glory and backstage in moments of unguarded camaraderie.