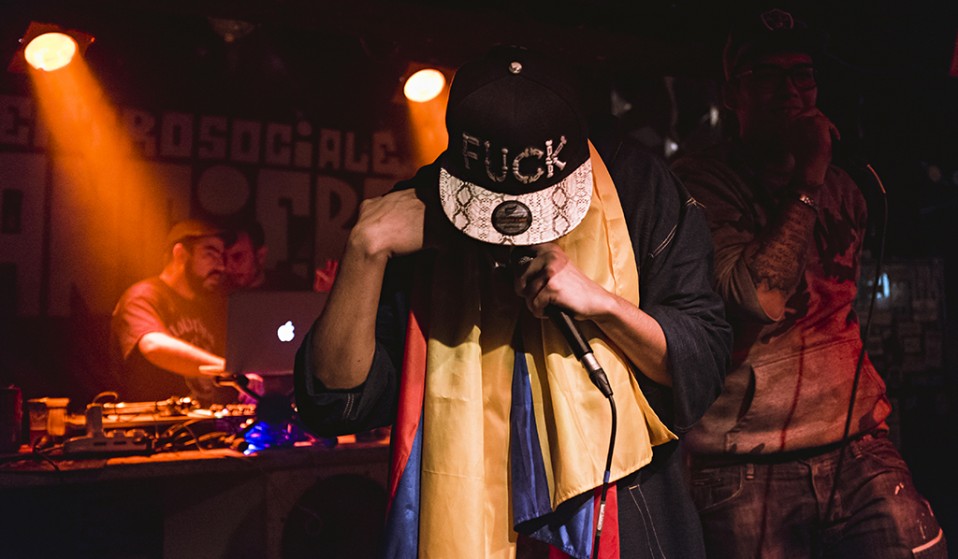 On the outskirts of a divided city, photographer Roberto Ramirez has uncovered a community bonding over the power of rap.

On the outskirts of Milan, a divided city rife with tension, photographer Roberto Ramirez has uncovered a stigmatised community bonding over the power of rap.

When Roberto Ramirez first moved to Milan from Ecuador, he felt completely alone. It wasn’t just a culture shock or the fact that he didn’t know anyone.

The 19-year-old immediately immersed himself in manual labour and, being shy, didn’t have opportunities to meet people his own age.

“It’s difficult to establish even simple connections with Italians when you’re between 18 and 25,” he says. 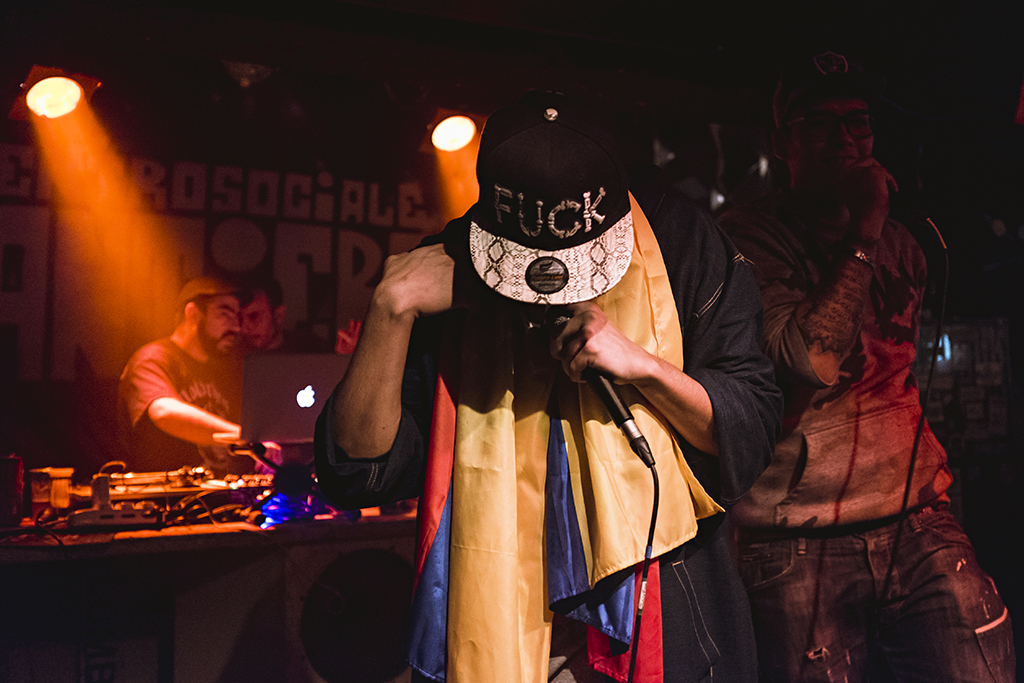 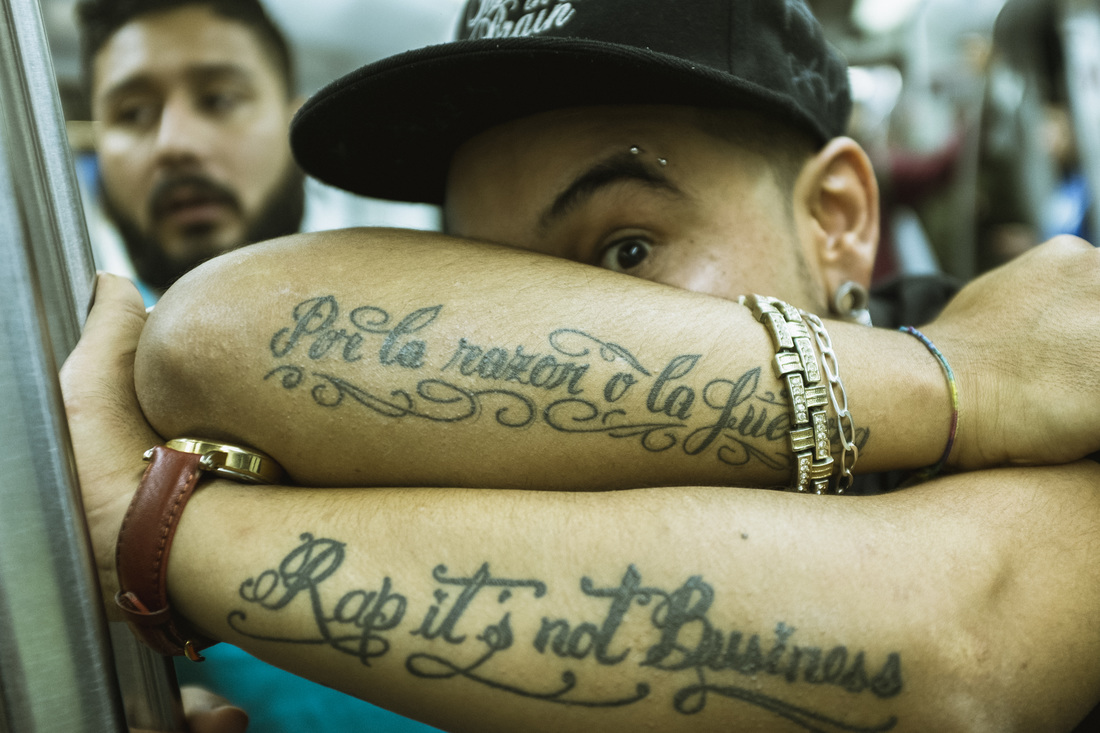 “There are very few intersections between Latin American and Italian youth. And that’s before you add in problems like unemployment, inequality of opportunities and the public perception of migrants.”

In July 2015, Roberto stumbled across a Facebook event organised by Latin American rappers close to Maciachini Metro Station. He stared at it in disbelief.

Young people from Ecuador, Peru, El Salvador, Bolivia and Colombia getting together at an underpass to rap?

The opportunity to tag along with a camera, he says, “opened a window on a satellite world.” 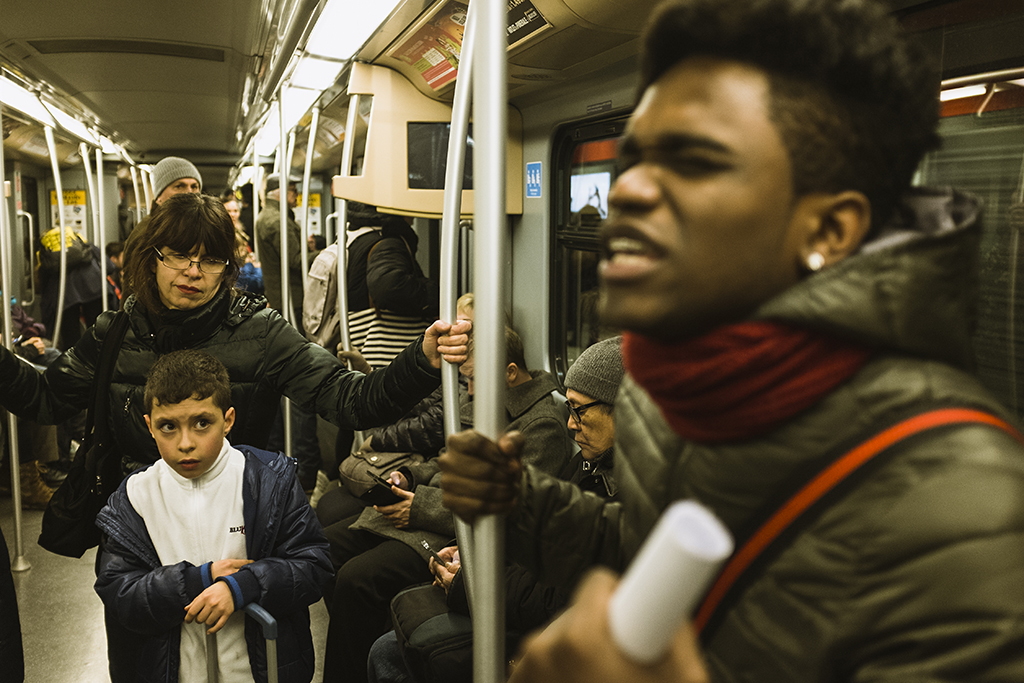 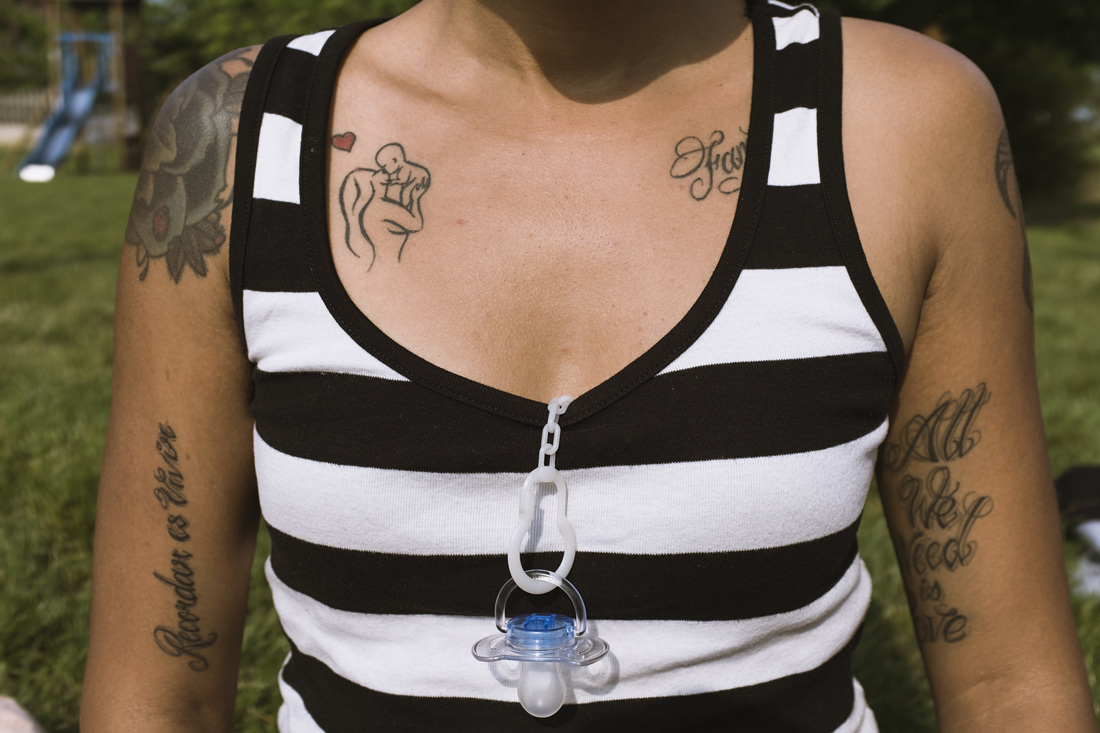 “Milan isn’t only fashion and design. It’s like an onion, geographically and socially: you have to take time to dig beyond the city centre and its stereotypes.”

What Roberto found was a collective of around 30 people using hip hop to share their life stories – and in their mother tongue. Some grew up in Italy, some arrived only a few years ago, but nobody was born there.

It started with three friends who used to meet at Brenta Metro Station, in the south of Milan, but as it grew by word-of-mouth, they moved to Maciachini, integrating all sorts of styles and identities along the way. 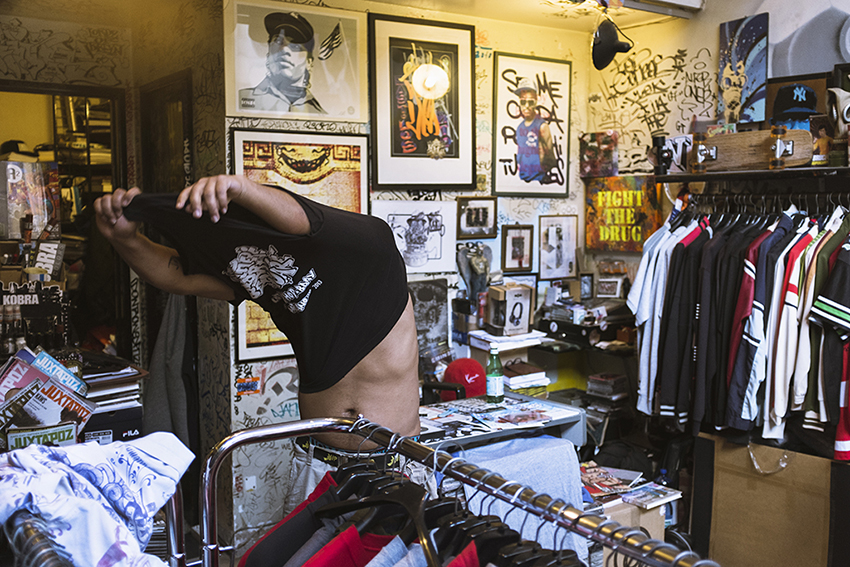 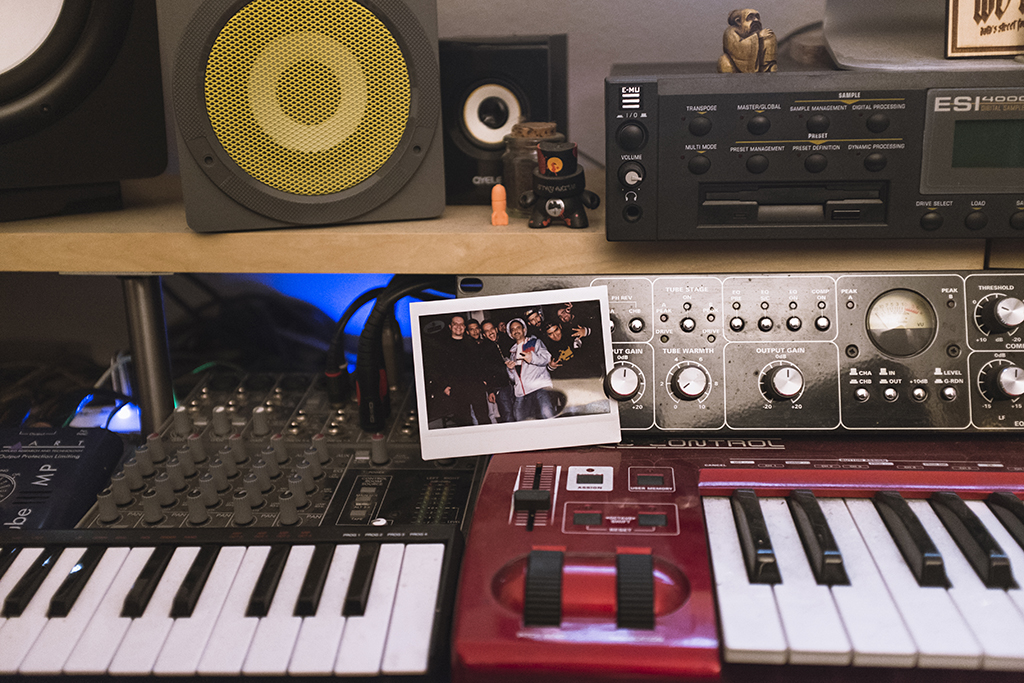 Some rely on hip hop as an outlet for self-expression, some consider it a weapon for social change and others just see it as fun music.

But within that are individual rappers unaffiliated with any crew as well as those who contribute in other ways, like attending concerts or helping the music reach a wider audience (a guy called Vago is the community’s unofficial videomaker). 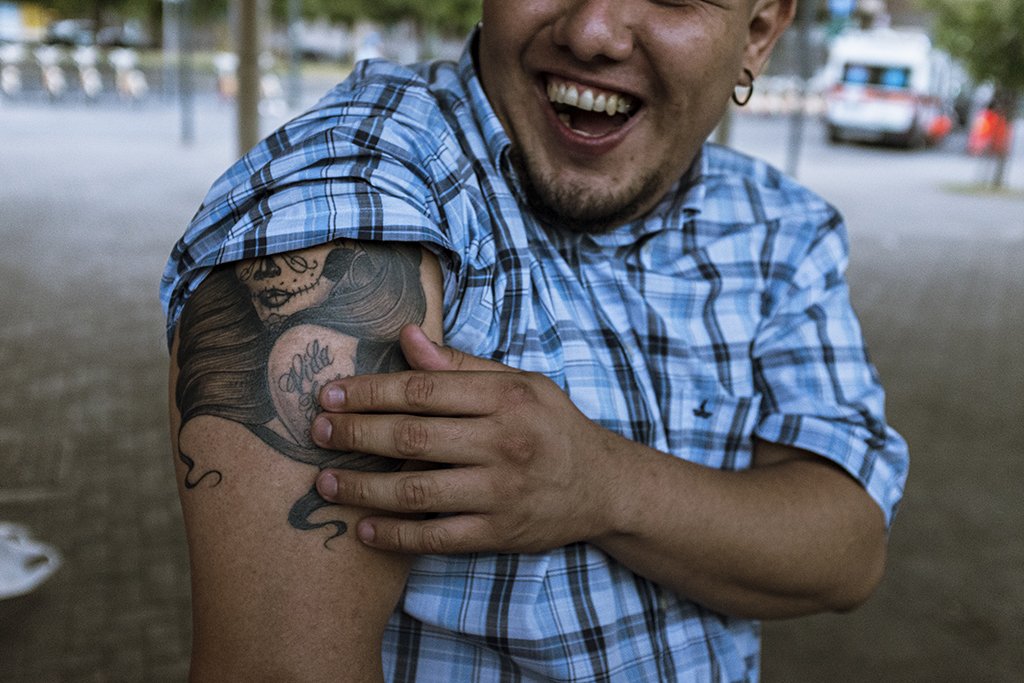 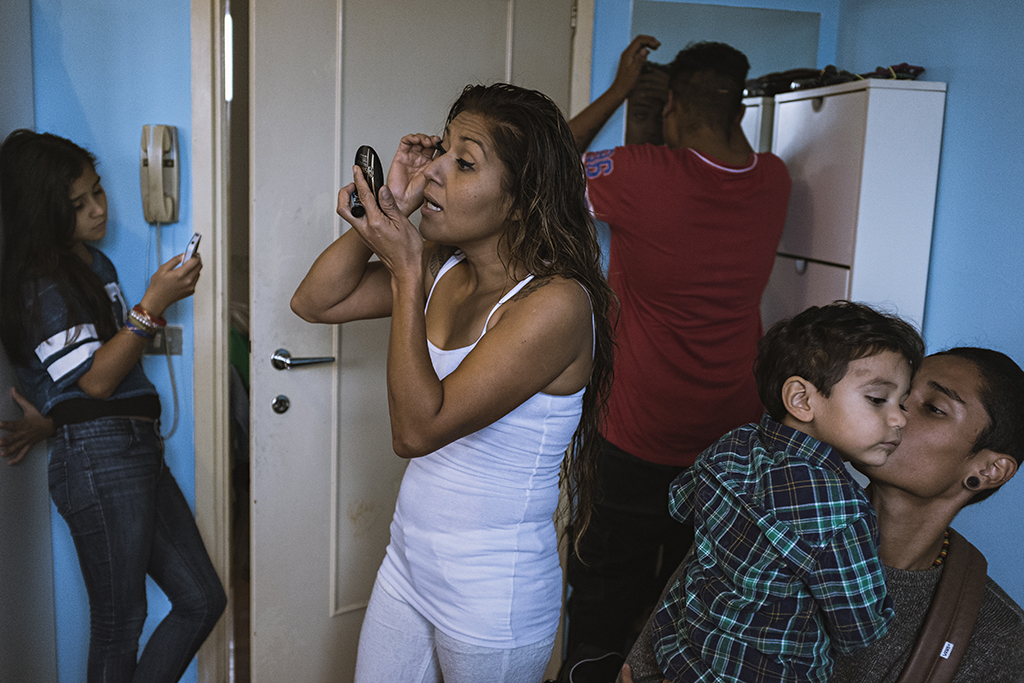 Roberto’s camera has followed them through gardens, bedrooms, parks and cultural centres, watching them perform or write rhymes as they open up to each other, always a smoke or a smartphone in hand.

For him, this is a chance to experience everything he missed out on as an isolated 19-year-old.

Now 32 and working as a truck driver, he first took up photography five years ago when the birth of his daughter inspired him to find a better balance in his life. 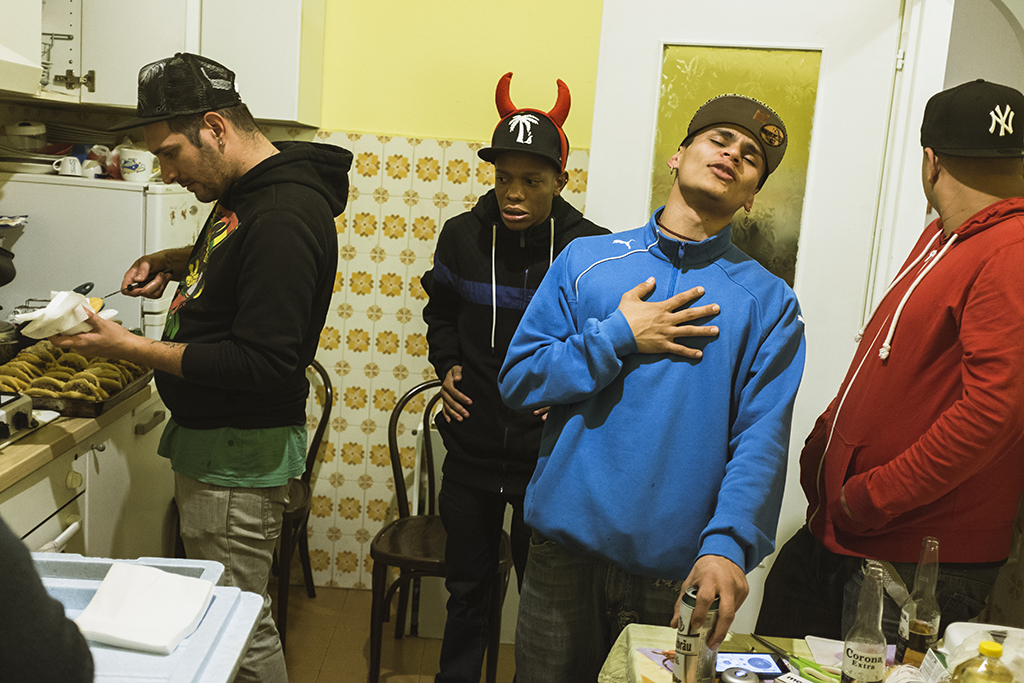 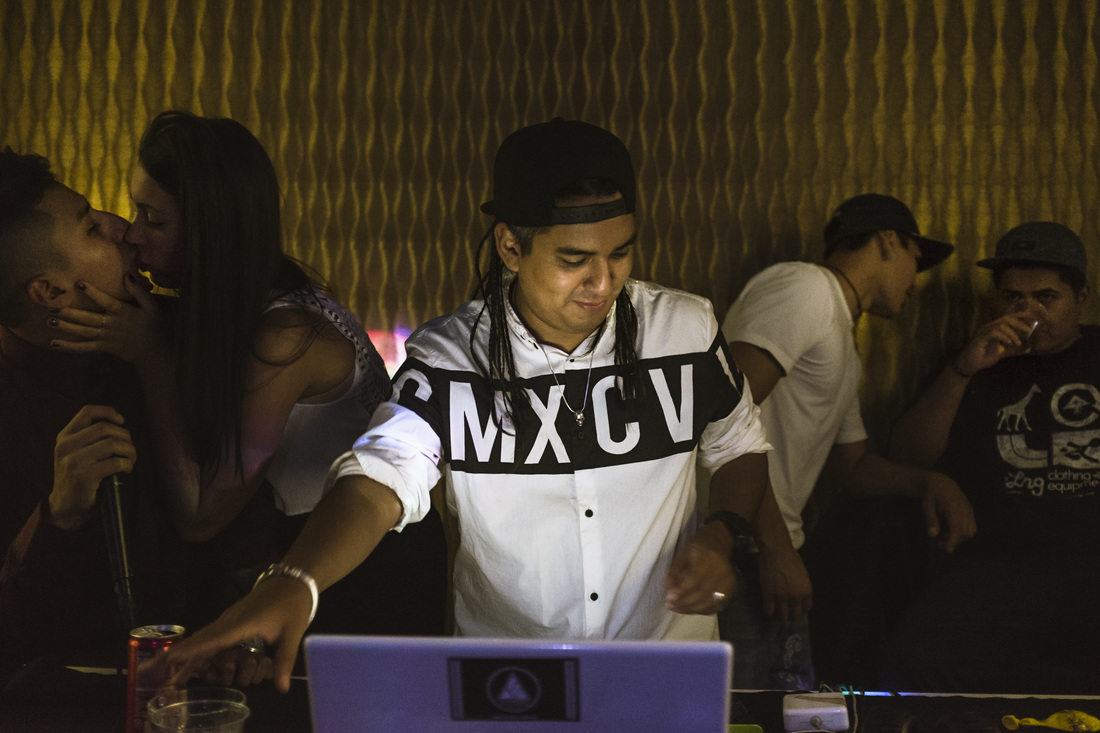 “Photography has helped me to observe and identify things in my surroundings I would have never dared to delve into,” he says.

Roberto took some courses organised by Circolo Fotografico Milanese, a renowned photography club, and won an award for his self-published project Milano è una Cipolla (‘Milan is like an onion’) in 2015.

Now he hopes his project on Milan’s Latin American rap scene (which he has titled Buenas Noches Barrios) will challenge the stigma that people like him face. 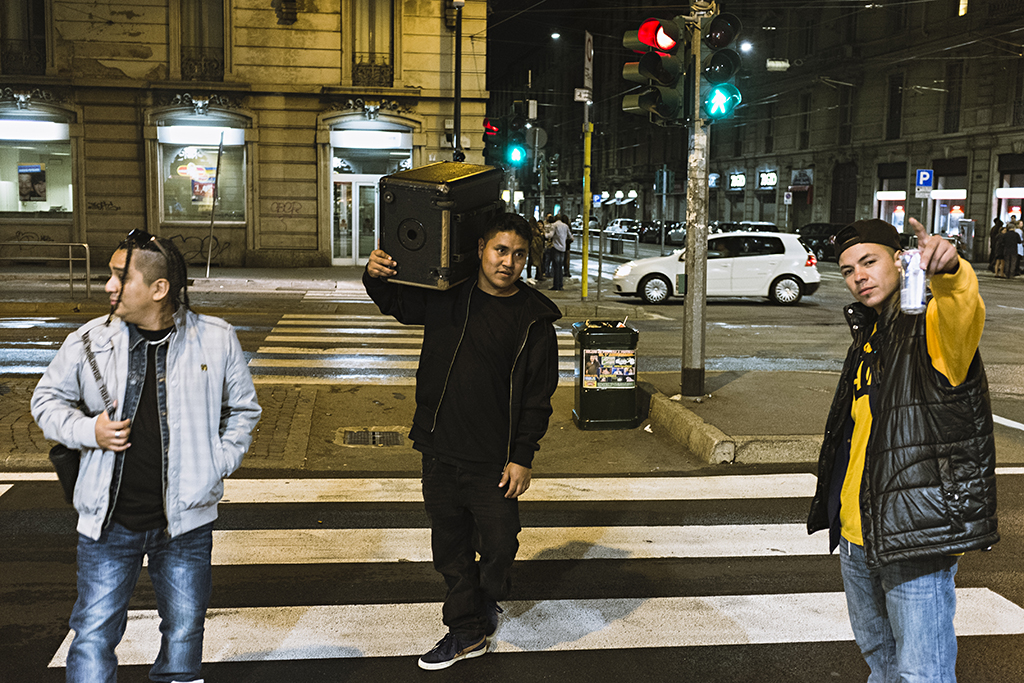 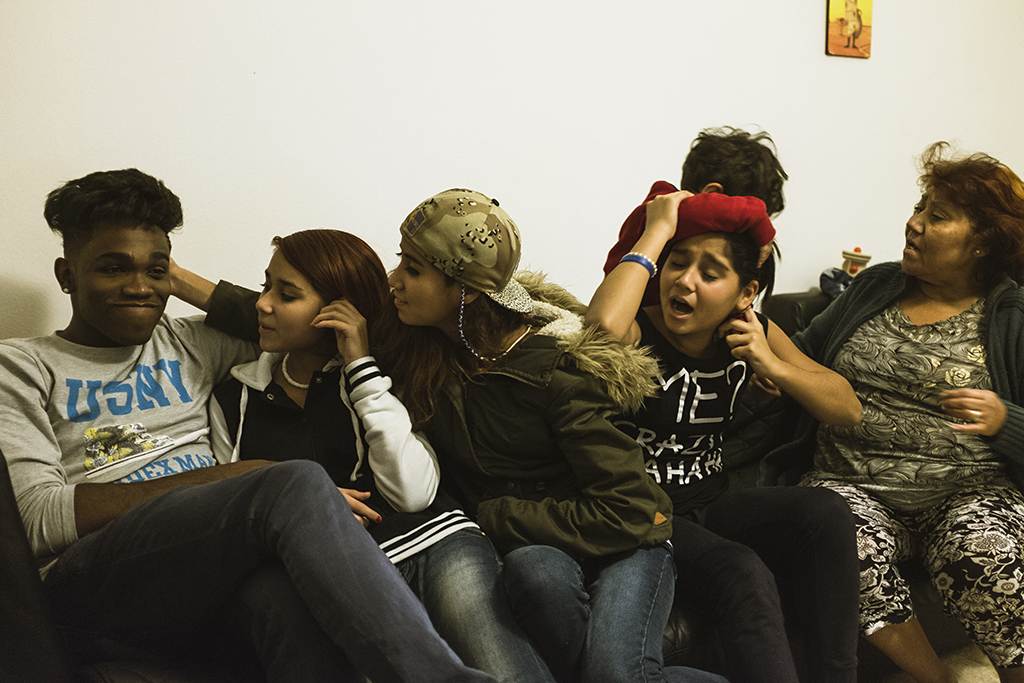 In recent years, local and international media outlets have focused on an influx of violent Latin American gangs into Milan, labelling it as “failed integration”.

“Migration has become a very delicate topic,” says Roberto. “The national and local narrative has been poisoned by media and political leaders, eradicating the difference between disadvantaged economic migrants and people fleeing situations of danger – rooting fear, racism and discontent in public opinion.”

An outbreak of violence around Via Padova – a hub for Latin American immigrants – last November has only intensified that tension. “After that, I felt the mistrust of people,” he adds. 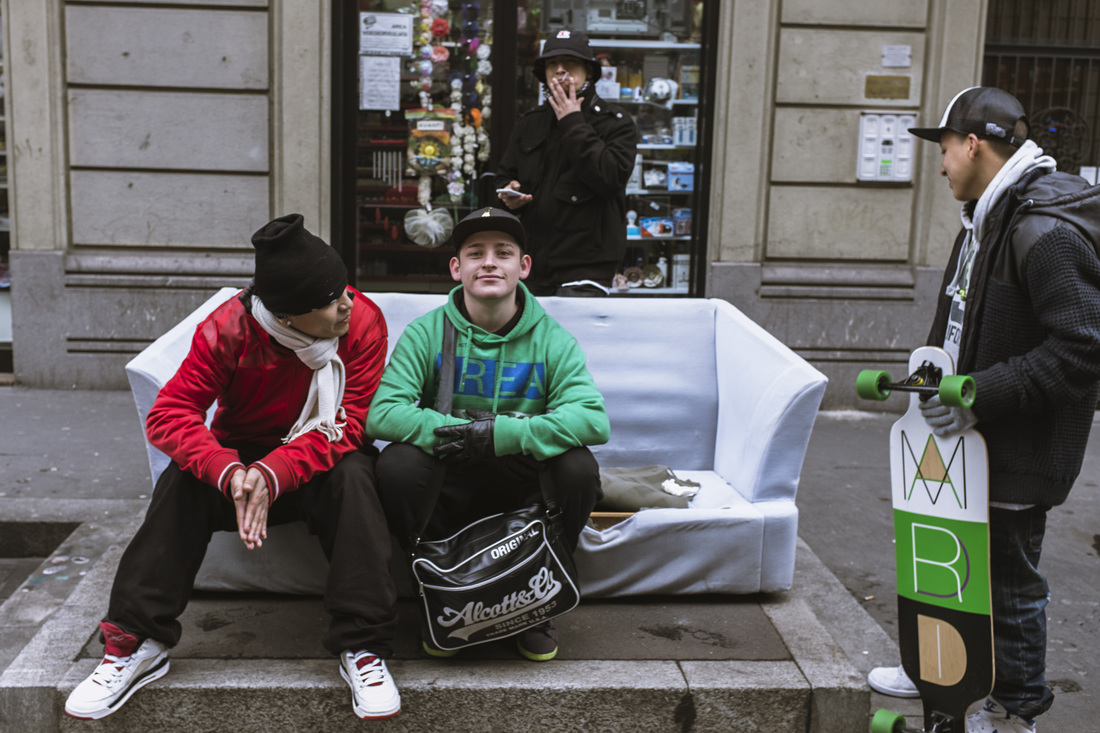 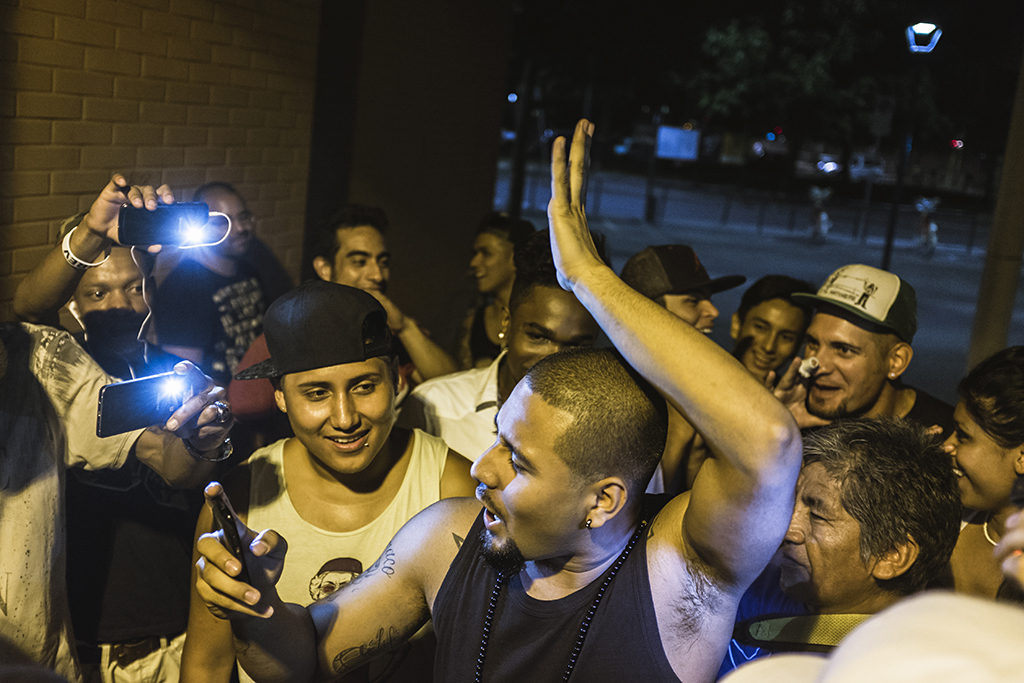 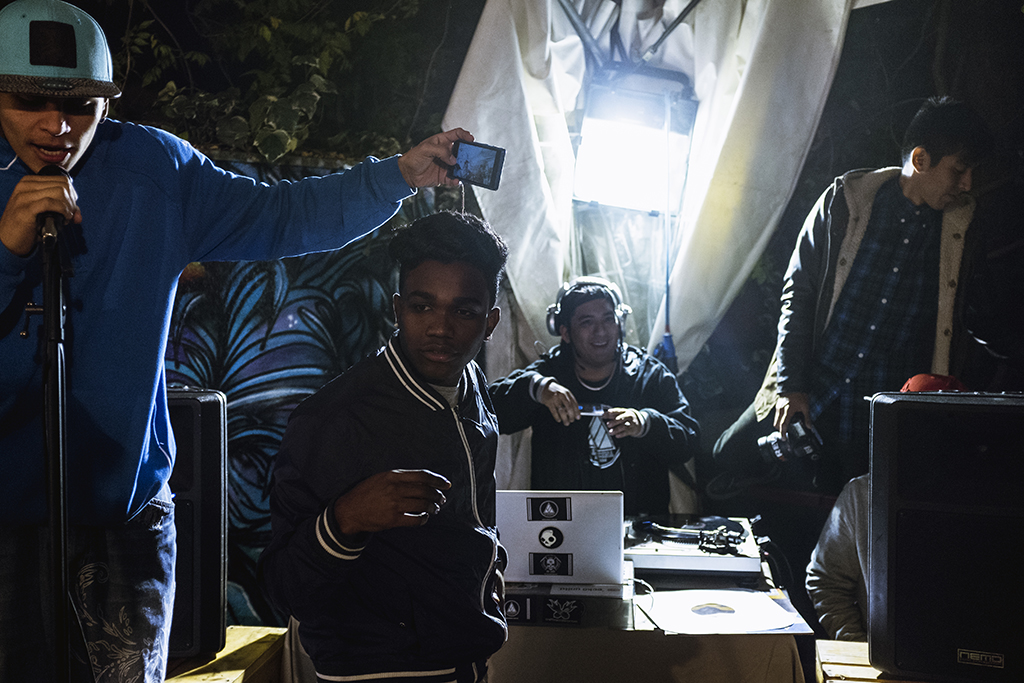 But in spotlighting the everyday world of people just trying to getting on with their lives in a foreign city – like Vinkee, a 22-year-old who works as a street fundraiser and studies cultural mediation, or the Cayao brothers, who work for a stage assembly company – Roberto wants to emphasise the importance of music as a tool for cohesion and solidarity.

“I hope my project will shed a different light on Latin American people,” he says, “and show that cultural integration is a matter of knowledge, of simply meeting others.”

Linkedin
RELATED ARTICLES
OTHER ARTICLES
A new podcast is opening up the conversation between trans women and trans amorous men in the hope of building coalitions.
Following the release of his debut single, Deyaz talks battling addiction, dealing with his struggles through music, and building a budding music career from his living room.
A new exhibitions brings together the work of photographers who documented the deep unrest of these pivotal decades.
A new film from Berghaus traces the story of Adam Raja, who left behind a turbulent upbringing to discover the healing power of climbing.
A new law change is enabling Britain’s donor-conceived children to know the truth about their origins – but campaigners say the fertility industry must do more to protect people.
Filmmaker Laura Poitras discusses her new documentary which traces the remarkable life of the artist-activist and the impact of her battle against the US opioid crisis.