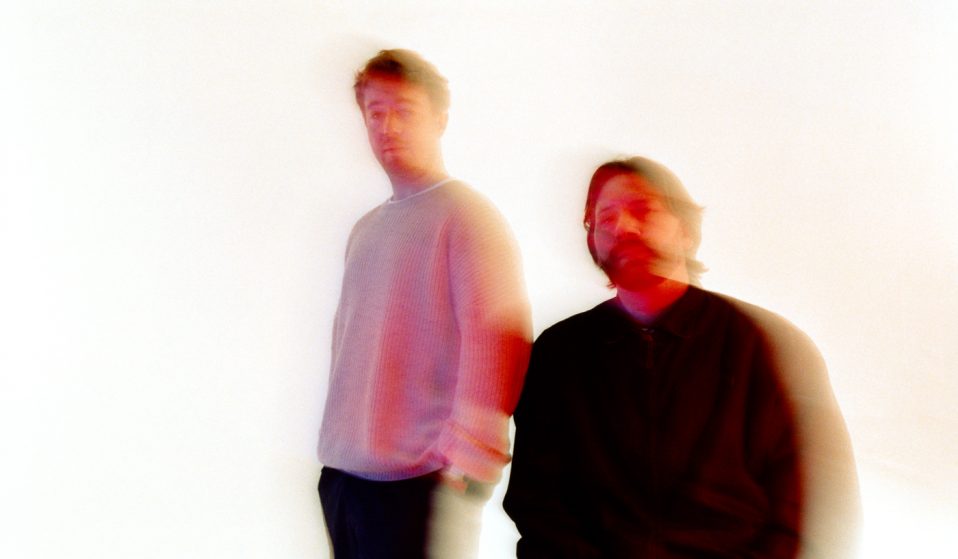 As the duo gear up for the release of their fourth album, they reflect on how time apart has evolved their sound.

As the duo gear up for the release of their fourth album, they reflect on how time apart helped to evolve their sound.

Kai Campos and Dom Maker are used to taking their time. As the band Mount Kimbie, the pair have spent the past 14 years crafting three albums that have come to define the esoteric edges of club culture. From the dubby, dawn-light dilations of 2010’s Crooks and Lovers to the fizzing electronica of 2013’s Cold Spring Fault Less Youth, and 2017’s yearning ambiance on Love What Survives, each release feels like the expression of newfound maturity earned by the duo.

“There is a joy and struggle in working over a long period of time,” Campos says. “When you’re 15, you just absorb music – you’re knocking out an album’s worth of material in a month and it’s all so new. As you get older, you want to create from that same place of excitement but it gets harder to reach. When you do get there – it’s special.”

Campos began his musical career by experimenting with bedroom productions as a teenager growing up in Cornwall. Meanwhile, along the coast in Brighton, Maker was similarly delving into his own world of songwriting. The pair met while studying at Southbank University in 2008 and soon began pooling their ideas in a home studio in Peckham. By the following year, they had released their debut EP, Maybes, to critical acclaim for its bass-heavy atmospherics and in 2010, they had their mainstream crossover with the track ‘Carbonated’ from their debut LP Crooks & Lovers. Blending crackling percussion with snatches of soulful vocal samples and underlying low frequencies, Mount Kimbie were labelled the poster boys of “post-dubstep” – the oneiric sound of London’s mid-noughties dancefloors.

In the five years since their last album, Campos and Maker have been experimenting with new ways to ignite that old artistic excitement. Following a world tour of Love What Survives, they parted ways to explore individual projects, with Maker moving to LA to pursue work as a producer and Campos spending late nights DJing in London. As they geared up to reunite for a fourth album, though, the pandemic hit, and their extended break produced an unexpected reflection on future work.

“We’ve functioned so long as a group because we know when to get away from the band,” Campos says while sitting alongside Maker – the pair now reunited at a Greek café opposite their North London studio​. “This time around, we had more time apart than normal and that allowed us to start making work that wouldn’t fit into the usual trajectory of our career. We both went down different avenues individually and experimented to see what would come out next.”

The result is “album 3.5”, as the pair are calling it. A stepping stone to their eventual fourth record as Mount Kimbie, “3.5” – or Die Cuts/City Planning, to give it its official name – is a 23-track double album that speaks to Campos and Maker’s progression as individual artists. Campos’s City Planning is a slippery escapade through electronic beats, arpeggiated melodies and synthscapes, produced entirely in isolation, and Maker’s Die Cuts plays as a wholly collaborative record of hip-hop, R&B and pop features, showcasing his skill as a vibrant studio conductor, as much as a composer.

Listening through from start to finish, the albums work as an exposition of Mount Kimbie’s musical DNA – writ large through features from the likes of Slowthai or Keiyaa, or honed to its most elemental state in Campos’s powerful arcs of sound design. Back together in London to mark the launch of the double album, the pair are reflecting on their surprise at what they have managed to produce over the past two years. 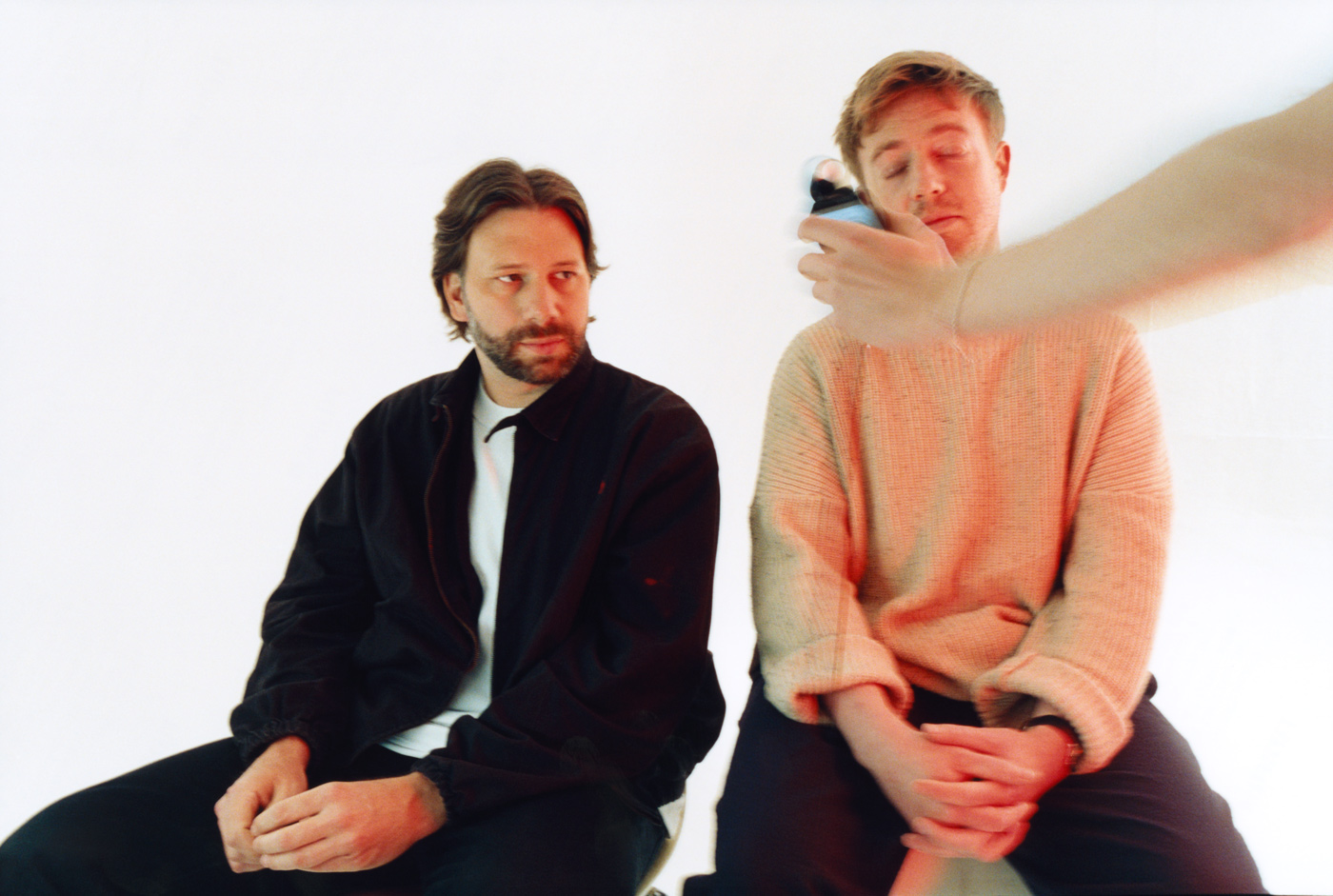 “We didn’t really talk about how the records would fit together,” Maker says. “We had a plan to complete them around the same time and put them out together, but the first time I heard Kai’s record was when it was finished, which was a crazy experience, as usually, we’re going through each other’s work in hundreds of different early iterations. It was a joy to just be a listener and to appreciate his talent.”

That listening session took place on a late Spring drive into the Joshua Tree National Park in 2021, while Campos and Maker blasted each other’s new efforts through their rental car’s shaky soundsystem.

“I always think the stuff I make sounds shit, right until the end of the process when it somehow comes together,” Campos laughs. “It was great being able to digest each other’s work once it was done because it allowed us to hear the middle ground between the two. It was like someone else had made these tunes, like this was a new musical identity for us.”

In their time away, Maker and Campos have indeed taken on shifting musical personas. Reconnecting with old friend James Blake in LA, Maker has spent the past five years reshaping his musical output as a producer and featuring on tracks from the likes of Jay-Z, Dave and SZA. “Early on, I’d turn up with James to sessions and the artist would want him to sing but we’d say we had all these beats for them to listen to instead,” Maker laughs. “That’s how my producing started and what laid the groundwork for this record. I wanted to make a communal album, a collage of my collaborators pieced together through sound design – like the geometric die-cut paper-making process of its title.”

Campos’s journey began in a similarly communal fashion, on the dancefloor. Initially, he shied away from club culture in his native Cornwall. “It was somewhat anxiety-inducing – not a place I could be myself,” he says. But it was only in recent years of travelling and listening that he discovered a different side to nightlife.

“Within electronic music, there is some of the most innovative and groundbreaking stuff being made and there’s also the most derivative and cynical music too,” he says. “I realised that I’d missed a lot of the subtleties of late ‘90s and early 2000s dance music – the more I listened, the more I started to appreciate it in a much deeper way […] Even in making the music itself, the sounds and styles you’re constricted to can make for far more creative results too.”

Campos began playing nights across London and witnessing how this previously-overlooked music could unite a crowd in movement. In the right musical context, clubbing could be self-expression, he realised. He got to work writing his own dancefloor productions but after 11 months meticulously crafting edits for City Planning, but he still couldn’t come to a point of completion. “I ended up taking it for mixing in the final month and breaking it apart again – I surrendered to the idea of finishing and what came out was totally different,” he says. “It was brutal but the record ended up being instinctive, like the best dancefloor moments.”

Despite being produced separately and playing out as records of individual experience, Die Cuts and City Planning have ultimately led Campos and Maker to find a closer collaborative relationship than ever before. “Ironically, through being apart, we have become much better at communicating with each other and taking space to really consider what we want,” Maker says. “Our next record is now being made in an entirely new way. It’s such a difference from when we started in our early 20s and we were just running full steam ahead with no thought for what the future held.”

Now that they find themselves stationed in that future, they trust each other to pursue individual paths under the guiding influence of their partnership. As Campos says, “Now, we can make the most of our time.”

Linkedin
RELATED ARTICLES
OTHER ARTICLES
The hate Just Stop Oil faced after throwing soup over a Van Gough painting has been immense. Here, they explain why it won’t deter them.
With the singer’s tour in full swing, we sat down the musical production company who made the electrifying show possible.
A campaign led by ex-torture survivors and refugee organisations has left the Tories with no planes left to carry out their callous scheme.
The photographer reflects on a decade which saw the rise of MTV and the flourishing of new genres.
A centuries-old tradition is offering families a way to honour the deceased, reports Arbab Ali.
After being subject to racism growing up, Kavi Pujara’s photo series allowed him to reconnect with and reimagine his hometown.