Art & Culture / Mourn: A brash band fighting to be heard 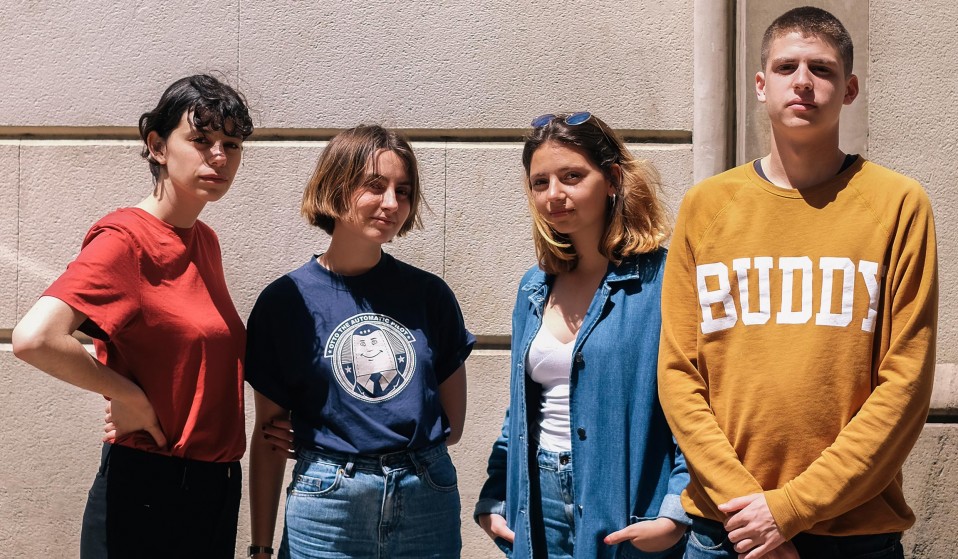 As Catalonian teenagers performing post-punk in English, Mourn quickly found a worldwide following. Then the real work started. Forced to self-fund a second album, they’ve become embroiled in a battle over rights that’s become a familiar saga in the broken music biz.

On a quiet street in the centre of Barcelona, Mourn are smoking cigarettes around a terraced cafe table, refusing to speak about the one thing we want to talk to them about.

The four-piece – all aged between 17 and 20 – shot to acclaim in 2014 for their self-titled debut: a terse blast of post-punk with no need for repeating choruses or even second takes.

Songs like ‘Boys Are Cunts’ made them sound like outcasts in adolescence: too mature to say the same old shit, but too young to care about sounding original.

Then, in December 2015, the band announced on Facebook that second album Ha, Ha, He. was effectively being held hostage in Spain. The post claimed that Sones, Mourn’s label and management team there, hadn’t paid them a cent – including advances, royalties, performance income and merchandising sales.

“We’ve had to pay for our new record out of our own pocket,” it read, adding that while certain costs need to be recouped, this was out of order. “We have no interest in shaming anyone,” the statement continued. “Our only goal is to be able to see the record released.” 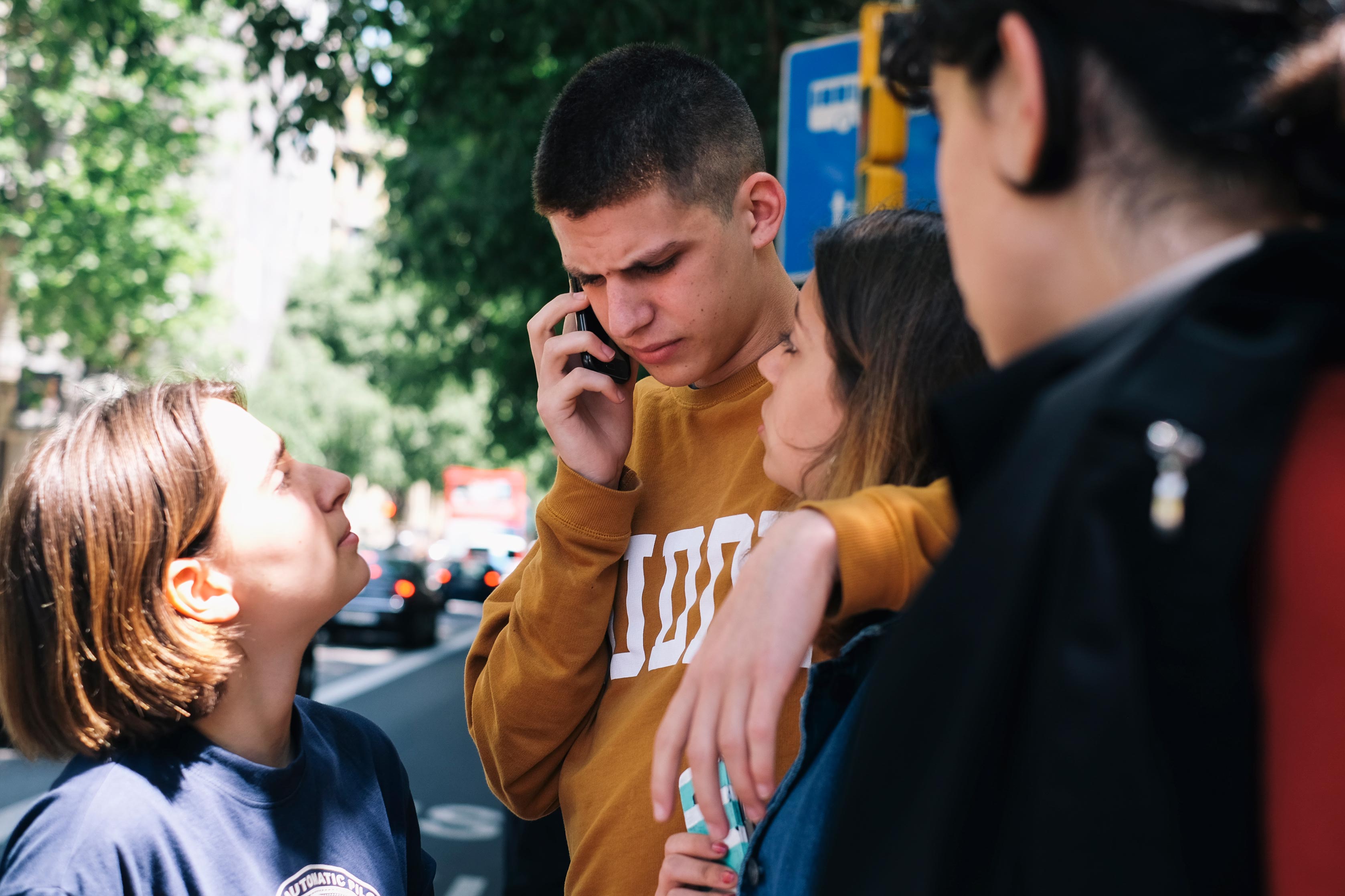 But the situation isn’t all that clear-cut. In Barcelona, many Catalan people side with Sones – a boutique label with a solid reputation – while international fans automatically back the band. Seemingly in-between the two sides sits Captured Tracks, a Brooklyn-based independent label that’s putting out Mourn’s new album everywhere except Spain.

The head of that label, Mike Sniper, has publicly said that while he’s not at liberty to discuss who’s wrong or right, no dispute can be worth damaging such a promising career.

It sounds like a mess. And while this isn’t the first time that labels and bands have fallen out over rights, it says a lot about the music business in 2016 that this can happen to a young, independent band just starting out.

Instead of the usual fanfare that accompanies a second release, there are no tour dates on the calendar and the album won’t be available in their home country. And judging by the band’s demeanour, an amicable outcome doesn’t appear imminent.

“We don’t want to talk about it at all,” says Jazz Rodríguez Bueno, singer and guitarist, emphatically. Later, in a follow-up email, she reveals that the group’s parents helped them fund a second album. Pressed on what the experience has taught Mourn about the music industry, Jazz simply answers: “Trust no one.” 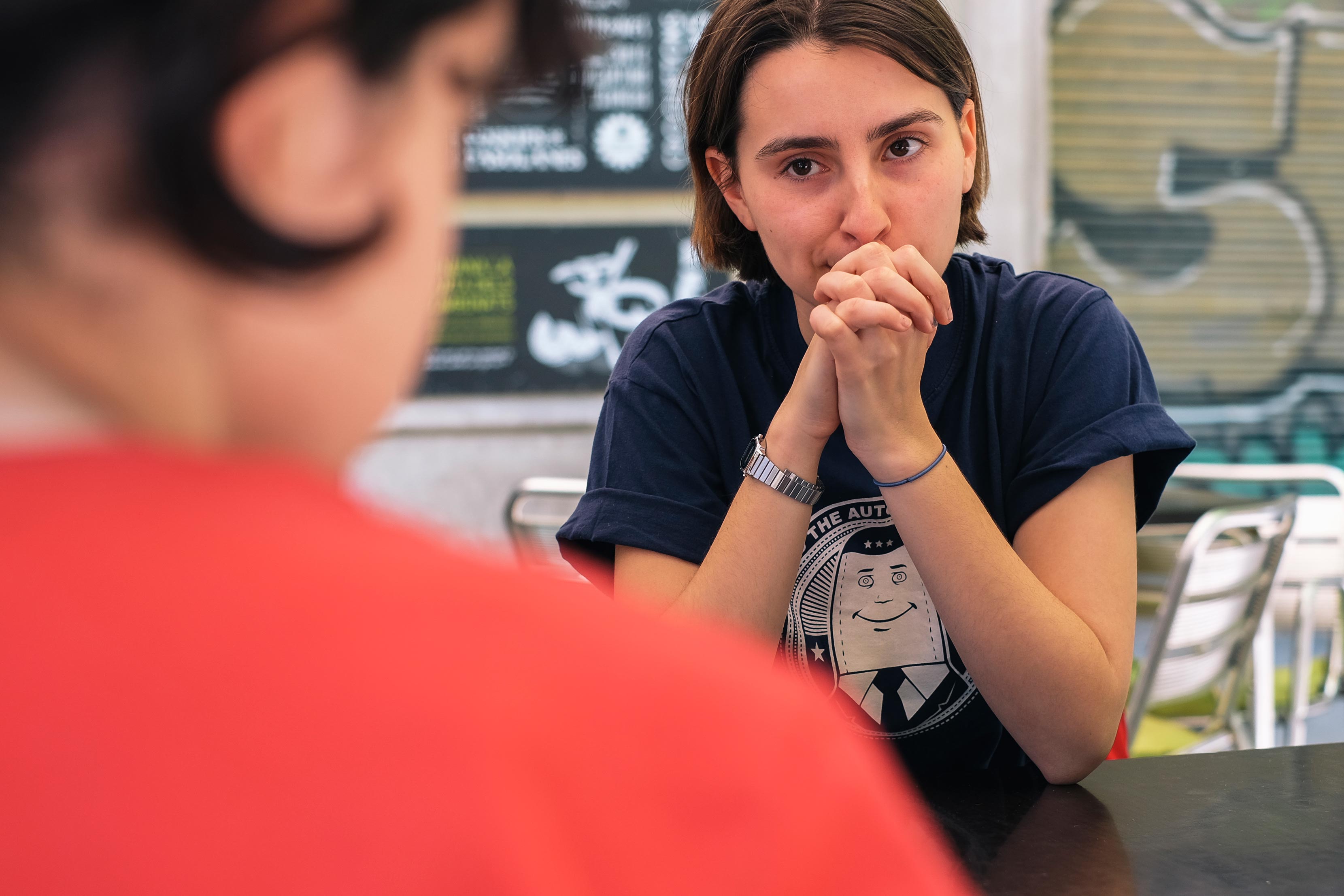 Beyond that, the public statement is as far as they’re willing to go, preferring to let the lawyers sort out everything else. “What’s happened, happened,” adds Antonio Postius, the drummer.

Barcelona’s music industry is small enough that a conflict like this could make life difficult – but Mourn aren’t about to go into hiding. Earlier this morning, the band emerged from Nitsa – a popular club night at Sala Apolo – before assembling for today’s interview at the city’s thoroughfare, Plaça Catalunya, eating pizza and chips.

“We don’t need the support of someone or a certain scene,” says Jazz. She’s the most outspoken one – so much so that she occasionally interrupts the others, though never rudely.

“We don’t live in Barcelona. We don’t give a shit. The people who have started criticising us and saying things about us are not our friends, just acquaintances, so it doesn’t affect us.” 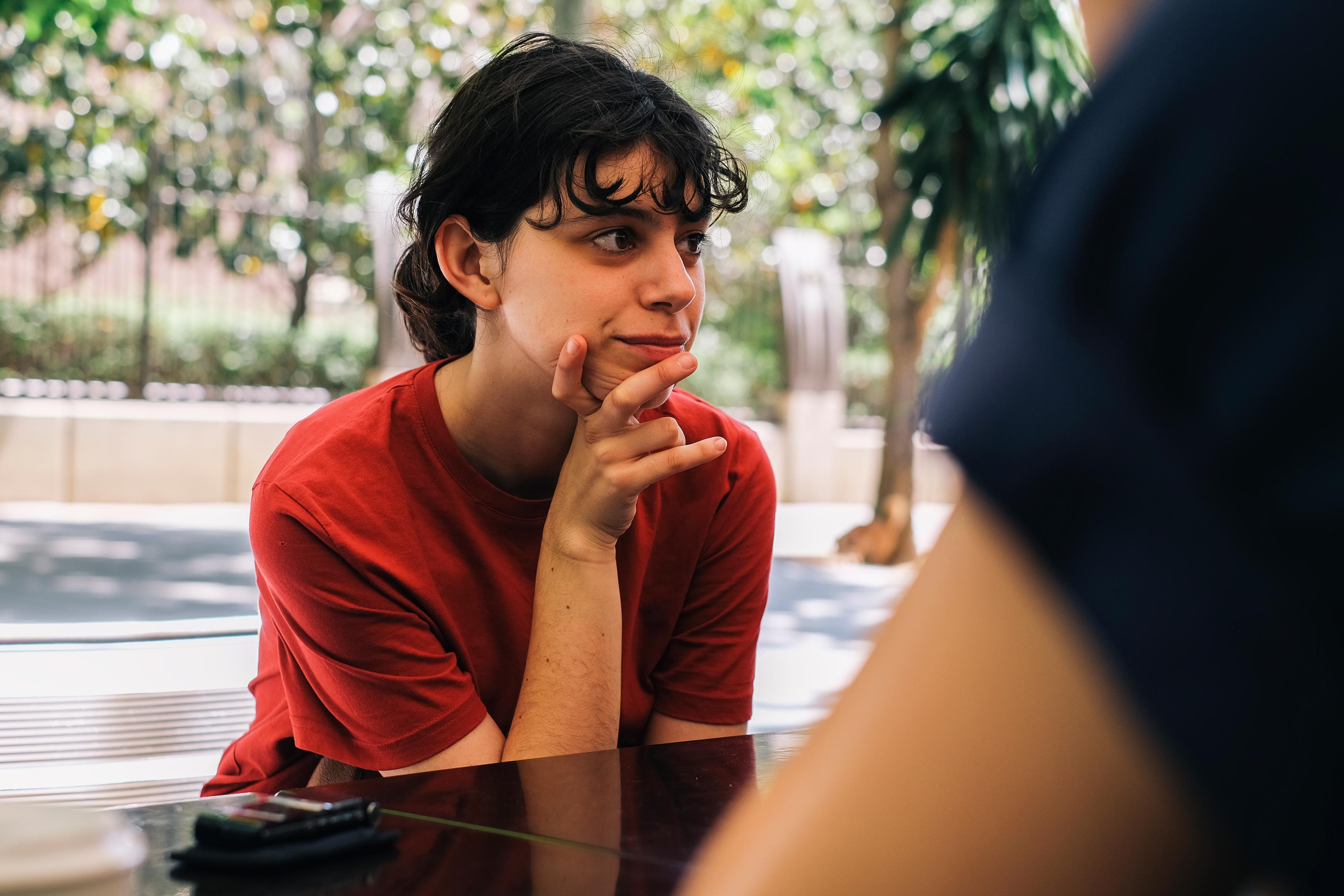 Everyone in Mourn (except Carla Pérez Vas, who also sings and plays guitar) is from Cabrils: a town about half an hour’s drive from Barcelona. Carla and Jazz have been best friends for eight years, having bonded in boredom at the back of classrooms. Leia, the bassist and the quietest in the band, is the younger sister of Jazz. She’s still in school.

Being the only male in the group means Antonio often hears crass remarks from other guys. But he just shrugs it off. “I’ve had more rock’n’roll with them than many men [I’ve played with],” he says.

The band are used to drawing criticism. Whether it’s their age, their influences, their attitude – there’s always been something. “People go around saying things they think we won’t hear – but we do,” says Antonio. “You think, ‘Walk in my shoes, then we’ll talk’.”

It’s mostly bullshit, says Jazz: YouTube comments that just make them laugh. But sometimes the condescension can be infuriating. A while ago, she and Carla played a gig at their old school as a favour to the teachers.

A sound technician tried to carry Jazz’s amp and spoke to her in a patronisingly soft voice, all while addressing everyone else normally. “It’s like, ‘You’re treating me as if I have no clue!’” she says. “But when we start playing, people shut up.” 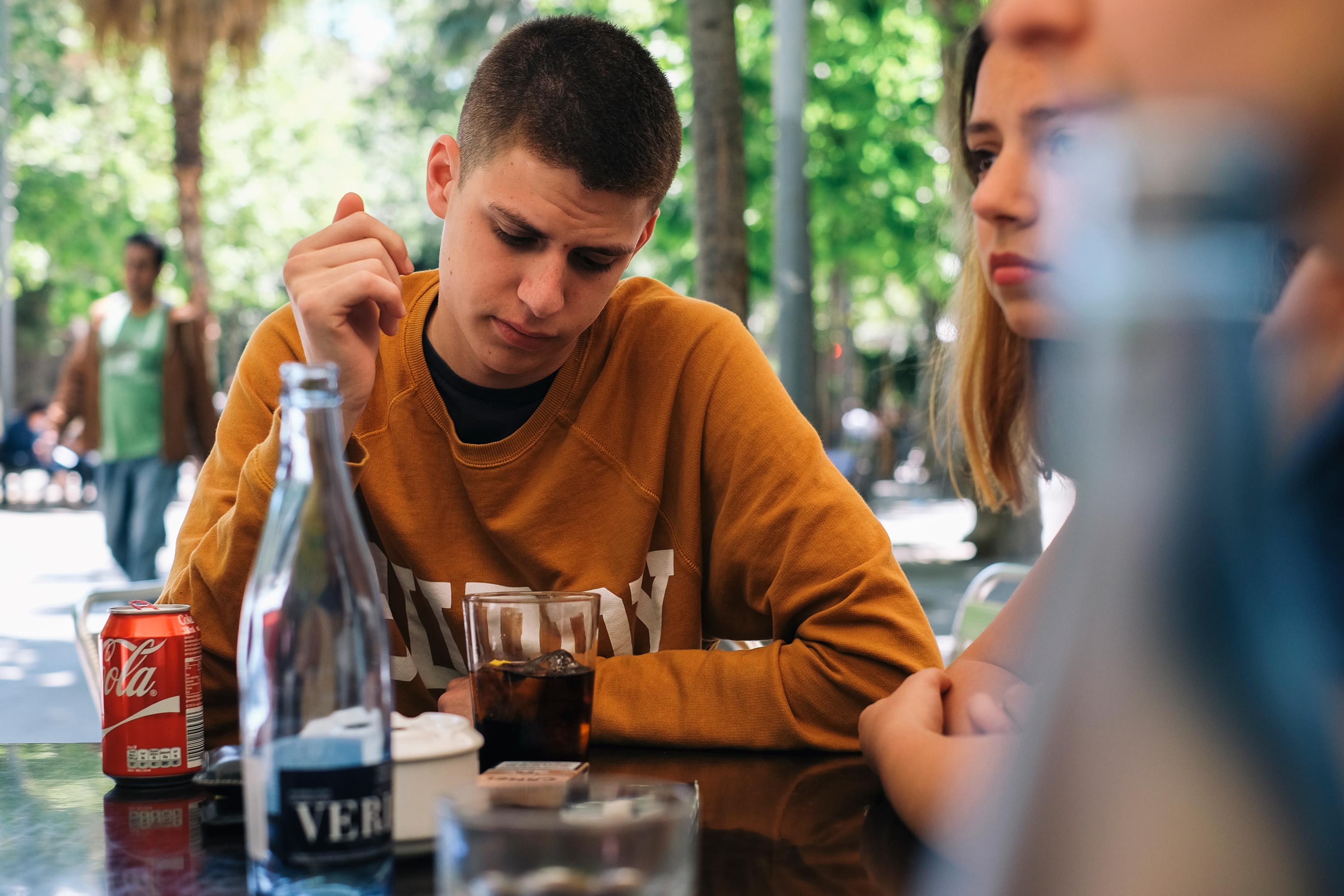 Mourn has plenty to say in their music but trying to draw them into a substantial discussion – whether it’s about Catalonian independence or anything else – proves futile. It could be their hangovers. It could be that the label conflict has proven too draining. Ultimately, they just want to play together. But they do have some advice for other young bands learning to navigate success.

“Don’t do it for anyone else,” says Jazz. “Don’t do it to please others… Don’t let anyone let you down… Don’t let people make you doubt your music. If you write what you want, just don’t take it too seriously. People have their opinions and that doesn’t have to affect your own.

“No matter what other people say or think, the most important thing is to stay true to being you. That will make you happier and take you further than anything else in life.” 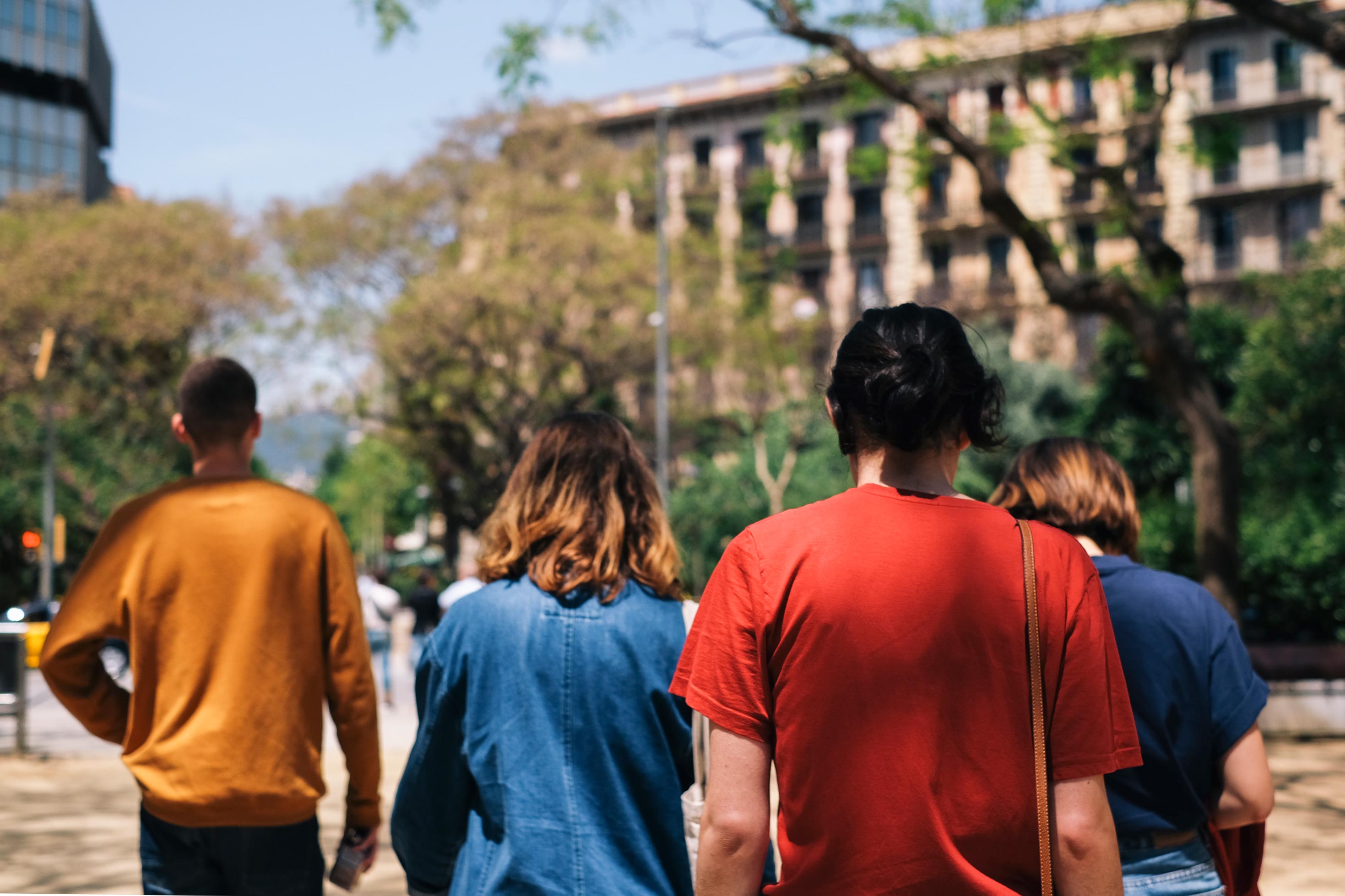 Ha, Ha, He. is out on Captured Tracks. Check out Mourn on Facebook or Bandcamp.

Linkedin
RELATED ARTICLES
OTHER ARTICLES
Thomas Hoepker‘s images taken during a road trip across America provide a searing social commentary about a divided country.
Proposals to introduce a minimum GCSE threshold for student loans will disproportionately affect those from marginalised backgrounds.
For decades, an area of East London has served as a community hub for Vietnamese people looking for a taste of home.
Photographer David Hoffman recalls documenting the extreme wealth inequality around Tower Hamlets and Hackney int the 1980s.
The last few years have seen an increase in LGBTQ-led initiatives to feed the hungry, with many finding ways to stay afloat despite the challenges.
LGBTQ+ students are keeping the spirit of the original Pride alive by fighting for liberation for everyone, not just their community.