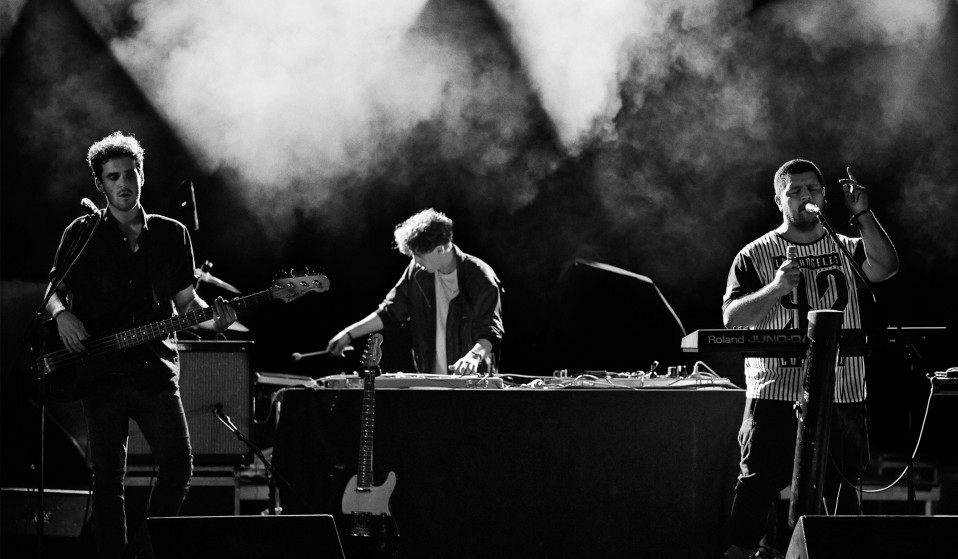 Aussie trio Movement get inspired by the boredom and isolation of long nights in suburbia.

Aussie trio Movement get inspired by the boredom and isolation of long nights in suburbia.

“The only thing we really need to be inspired is all of us in a room and night time,” Sean, Movement’s percussionist, says. “From there we seem to be good to go.”

From their bedrooms in the dull Sydney suburb of Hornsby, post-rock trio Movement have been slowly constructing a dark, sensual sound that has caused tremors around the world.

“There’s like a bowling alley and that’s it,” bassist Jessie explains. “It’s productive though cause we don’t go anywhere. We can go to the city, but I’ve hardly been at all this year.”

When the lights go out, Movement come into their element. Their isolation becomes a catalyst, and they record late into the night at Sean’s homemade studio.

“Nothing really exists, there are no distractions,” Jessie says. “You can drink without feeling guilty at night and that’s always a good thing. It’s quiet. Night just seems to work for us.”

“When we’re there in the spot at night and we’re ready to go, Lewis brings it to life,” adds Sean.

Lewis’ spine-tingling vocals – that have to be experienced live – perfectly balance Sean and Jessie’s bass-heavy beats and spaced-out, shadowy sound. Until they consulted producer and The Weekend collaborator Illangelo on their self-titled EP, Movement had done everything themselves, and that’s the way they try to keep things. Sean takes on the majority of production duties, stitching their self-recorded parts together – in his own way and in his own time.

“We need to be the ones that are working on it at every moment.” he says. “It needs to be a true reflection of where and who we are. Home is perfect because I can do all the production, all that work, in my own time with no pressure. I can just do what I want. It’s so much better. The best thing I think we’ve ever done was to learn how to do all of that ourselves.”

Movement’s DIY approach and disconnection with Sydney’s local scene has allowed them to create a pure, minimal sound that blends the sparsity of Sean and Jessie’s instrumentals with the raw emotional power of Lewis’ vocals.

Despite barely registering on anyone’s radar at the start of the year and still being relatively unknown in their native Australia, 2014 has seen Movement blow up. They smashed Modular’s awesome For Festival in Croatia, Pitchfork Music Festival in Paris and have supported Solange and Darkside on tour. Their first London gig in June was at the tiny stage downstairs at Ace Hotel, but in November they returned to play two electric sold-out nights at Dalston’s Birthdays. The pace of change and the distance they’ve come from the Sydney suburbs is something they’re still trying to get their heads around.

“To give you a context of exactly where we came from and how much of a mind fuck it is, basically we come from a place where nothing happens and there’s a bowling alley,” says Sean. “I know people that are just happy to drink on the weekends, or every night and just do nothing. Contrast that existence, where the internet is your only connection to the world, to now being on a plane with the Klaxons and seeing Justice come to our show in Paris.”

“It’s cool as well because you go back home and nobody gives a shit.” Jessie adds. “If I told half my friends they’d be like, ‘Oh cool man. So, what are you doing like tomorrow night?’ And I’d be like, ‘Just going bowling.”

Linkedin
RELATED ARTICLES
OTHER ARTICLES
After fleeing the war in Ukraine, people are finding it impossible to secure affordable and decent housing in the UK.
The first-generation graffiti artist reflects on the tagging’s emergence as an art form and the players who pushed the medium forward.
Jeffrey Henson Scales intimate portraits and protest images of the BPP and its leaders offer a rare insight into organisation at a time of societal upheaval.
Yohon Tatum, aka Legendary Father of the House of Tisci, reflects on nurturing a new generation of talent.
After blocking the Scottish government’s gender recognition reform bill, Westminster is now devising further changes to the law to make it harder for trans people to self-identify.
David 'Dee' Delgado’s photo project is about honouring and uplifting the city of his youth, and a world rapidly disappearing under the relentless onslaught of gentrification.