Pioneers of the viral music video, OK Go are back with yet another expertly-choreographed visual spectacle – this time in zero gravity.

Pioneers of the viral music video, OK Go are back with yet another expertly-choreographed visual spectacle – this time in zero gravity. And no, it's not CGI. To find out how it all came together, Huck spoke with the band's long-time video director and collaborator, Trish Sie.

When OK Go burst into mainstream popular culture ten years ago, their brand of catchy alternative pop-rock happily collided with the burgeoning popularity of the then brand-new YouTube. The video for their single Here It Goes Again featured an intricately choreographed dance routine performed on treadmills and quickly became one of the site’s first viral sensations. It spawned countless parodies, received a Grammy award, and helped the band transition from an underground alt-pop niche into worldwide notoriety.

Since then, the band has ridden the YouTube viral wave with a series of music video spectaculars. There was the enormous Rube Goldberg machine in 2010’s This Too Shall Pass, dancing dogs in White Knuckles the same year and racing cars in 2012’s Needing/Getting.

Mostly funded by brands eager to jump on the viral video bandwagon, their latest is Upside Down & Inside Out – a cut off their album Hungry Ghosts, which features the band performing yet another elaborate dance routine. Only this time they’re floating inside of a plane diving sharply to simulate zero gravity, surrounded by exploding balloons, bouncing balls, acrobatic dancers, and slicks of paint.

Filmmaker Trish Sie co-directed the new video with her brother, OK Go frontman Damian Kulash, along with several of the band’s past viral hits. She spoke to Huck about how they managed to pull it all off…

I loved your video. If anything it just made me feel incredibly jealous that I wasn’t there experiencing zero gravity too.
[Laughs] That’s always a good feeling. My best response to things is when I’m jealous. It means we’re doing something right. If you wanted to be a part of it, if you wanted to be in it, if you wished you made it – then we’ve done something right. So that’s like the greatest compliment. 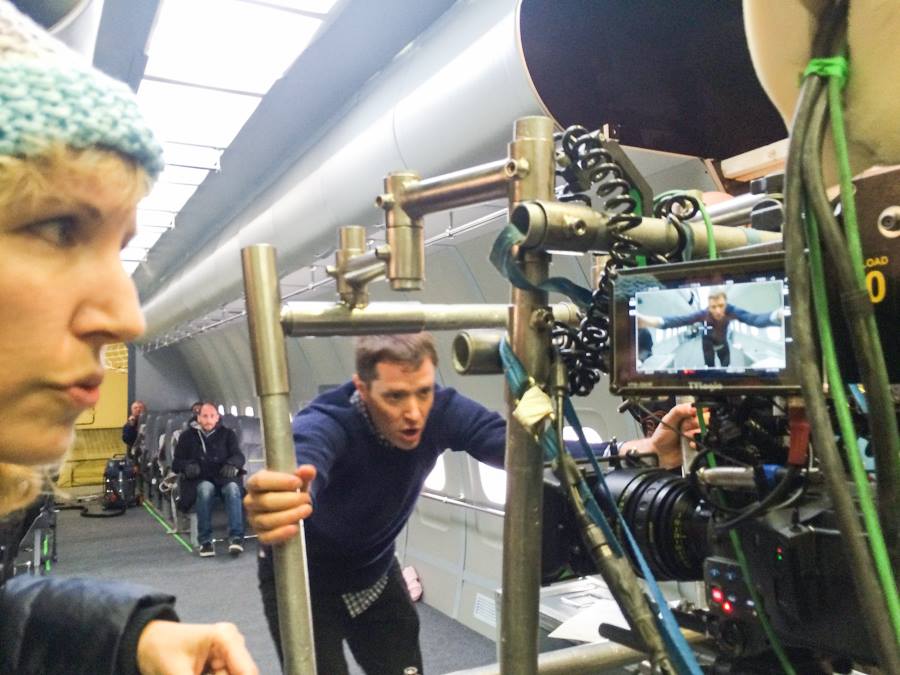 This is pretty embarrassing, but I actually Googled how much it would cost to go on one of those zero-G simulators right after I watched the video. It looked like too much fun. But then I saw how much it costs, and it kind of bummed me out.
I know! It’s so expensive!

You were lucky to get to do it.
That was one of my first thoughts. We always thought it would be one of those pipe dreams that would never happen. And when we told them how many flights we’d need – we said we needed 21 flights. That’s insane! [Laughs]

Professional training cosmonauts do 10 flights a year, and we did 21 flights in a month. It was expensive and it was insane, so yeah, I don’t know who was brave enough to let us do it. It was a good call — but it was crazy of them.

So tell me how it all came together. I’m curious about the logistics of it.
Well, my brother’s in the band, his name is Damian. And we’ve been making stuff since we were children, so it’s one of those things where we’re always looking for new ideas. When we have an idea, we jump on the phone. “Listen, we’ve gotta do this!” This was one of those times where we were like, “Listen, we’ve gotta get on this plane that simulates weightlessness! How fucking great is that?!”

I think, at the time [2012], there were only a few of these planes in the world. There was one in Florida, where the NASA space program is, and one in Russia. So we went to Florida and we flew on this plane, and what they do is you can, as a tourist, just sign up to go up on one. It’s like a very expensive ride at Disney World.

You’re with a bunch of other tourists, they put you in a little flight suit so you feel very official, and you go through an hour of training in the morning in a weird hotel conference room and you go on this plane. And you sit in the back and they serve you Doritos and tea, and it’s all very gentle and sweet. But crowded. There’s like 36 people on there, all tourists. 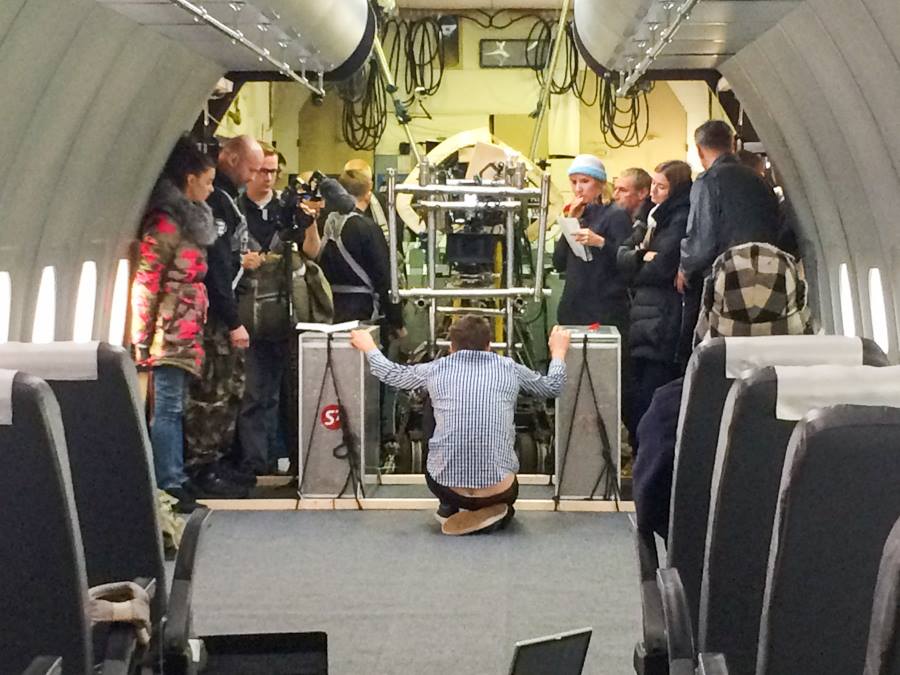 So we really enjoyed it, and we saw a lot of potential, but we were like, “This is not gonna work, you can’t do it with 36 tourists.” And how are you gonna do it with these little [25 second] segments you get of weightlessness? We were excited but we were also very, very weary of the constraints of the whole thing. And it’s very expensive. So we put it off, thinking that if some day we win the lottery, that’s gonna be our project. We will harness the beast that is zero gravity, and we will figure out a way to make a dance video to OK Go’s standards.

Because it was so expensive, we thought it would never happen. But oddly enough, this Russian airline, S7, asked OK Go if they wanted to partner and collaborate. Damien’s head clicked and the wheels started turning, so we pitched them this idea, and it seemed ludicrous. Because it was so experimental – even we didn’t know if we could pull it off.

We were shocked that they said yes. To the last second, I was sure they would pull the plug, that somewhere along the line they’d come to their senses and say, “This is crazy.” But nobody ever said that, and it just kept going and going and going.

For the first stage of our creation, we all just flew around. We went in the plane for six flights and just tried to figure out what would work. So we had sparkly shoes, fedora hats, frisbees, big heavy chains that looked like they belonged on the bottom of the ocean – we just threw them all in the air. We danced, tried flips and spins, fast movements, slow movements – everything. That first week was just like playtime, in order to get a kind of vocabulary for what could work.

Then once we had it, we shot all of it with GoPros all over the place, and with a hero camera, and a techno-crane, and we cut it into chunks of choreography that would look seamless. 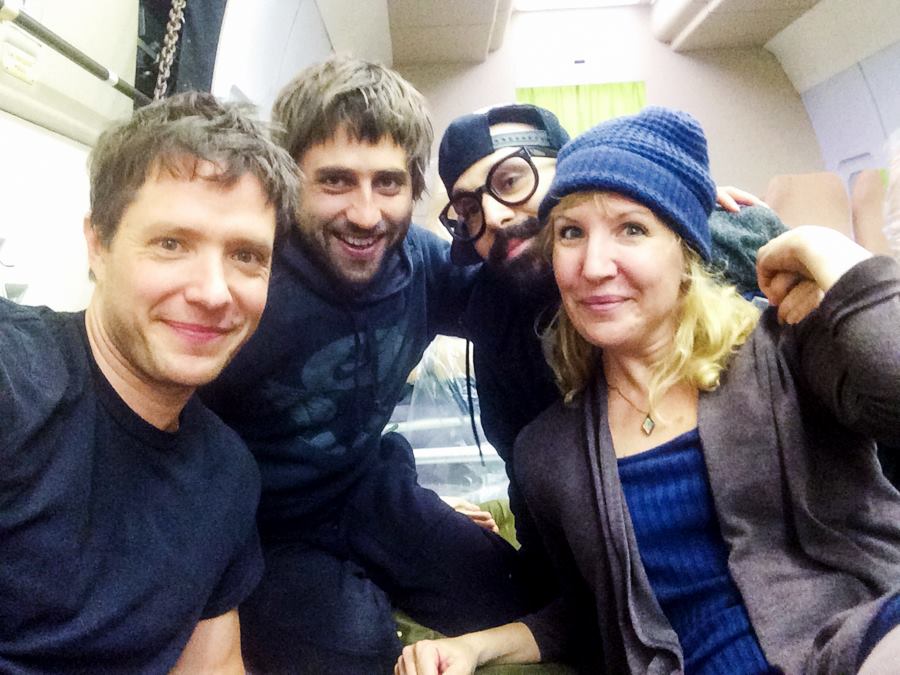 OK Go seem to be constantly out-doing their previous videos in scale and budget. Would you ever go kind of low-fi again for future clips? Along the lines of Here It Goes Again?
We’re all so exhausted from this one, and so shell-shocked by the entire experience, that another video is sort of the last thing we have on our minds right now. And that’s for real. Damian might have a concept simmering somewhere, but honestly, no one’s talking about any concepts right now. We just blew it out with this one.  I don’t know what comes next.

But I think it would be interesting to go lo-fi again. I am always in favour of that. My brother’s quite technological. He just loves cutting-edge stuff, and gadgets and toys. I like that stuff too, but I’m also pretty old-fashioned. I like a good idea, I like transparency. I like your audience to know how you did things, because then they feel like they’re a part of it with you. And this video kind of starts to go into that territory of like, “Huh? Was that CGI?”

So I feel like I would like to, at least in my own work, go back to really clean, transparent ideas. The resources it takes to do something like this last video are staggering. We’re lucky we had access to that. But that’s also not the only way to make things.

One of the things I miss about the old days of OK Go was, you know, kids emulating these dance numbers in their talent shows, and kids making OK Go-style videos. Like on their kitchen table, or a Rube Goldberg machine made out of pots and pans. That kind of everyman creativity is something those early videos really, really bolstered and empowered.

I love the wow factor of these later videos, but I do have a special place in my heart for that simpler [aesthetic]. That sort of, “You give me a ton of objects and I’ll be creative with them. Now go!” And that’s a nice philosophy, too, you know?

In the meantime, I’ve got a future movie I’m working on, I’m putting out a short film next month, I still shoot commercials in a very traditional way. So I’ll keep working and making stuff, and I’m sure OK Go will, too. So we’ll all be busy. But, yeah, the next video might take a while. [Laughs]

The complete video, along with behind-the-scenes footage of the shoot, can be found at Facebook.

Linkedin
RELATED ARTICLES
OTHER ARTICLES
Whether posing for portraits, making her own images or collecting works, the artist recognised the impact of photography at a time when it was not a widely accepted art form.
For decades, Wilmslow Road has been a bustling area full of curry houses. But how did it come to be what it is today?
As Lisa McGee’s sitcom approaches its final episode, writer Seaneen Molloy reflects on how the show sought to give an honest portrayal of teenagehood during the Troubles.
A new campaign is calling on universities to sever ties with the private company that runs Britain’s immigration detention centres.
The failure to hold landlords to account is denying tenants their basic dignity, writes Bella Saltiel.
The government is scrapping the Human Rights Act in a move that will hit marginalised people hardest.