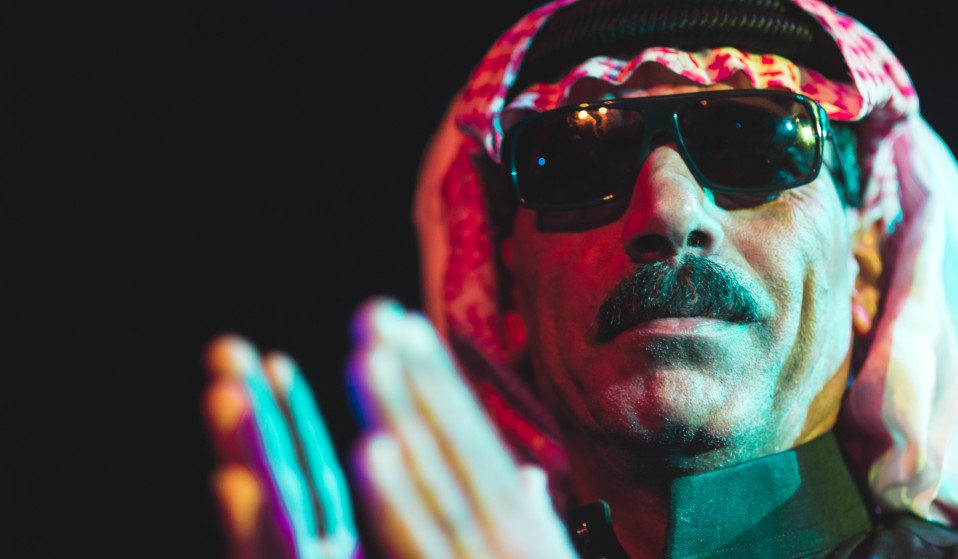 Syria's funkiest export is as no-nonsense as they come: rocking the same style and attitude, regardless of success.

Syria's funkiest export is as no-nonsense as they come: rocking the same style and attitude, regardless of success. In the week he puts out a new album and plays Field Day London, the legend granted us a bullshit-free interview.

Omar Souleyman is a figure of few words. Always dressed in a robe-like djellaba, a red-and-white keffiyeh and some serious-looking shades, the 50-year-old exudes an enigmatic ‘I don’t give a shit’ aura that follows him on stage.

He started out as a prolific wedding singer who managed to recorded over 500 live albums (typically gifted to the bride and groom) before civil war broke out in his homeland of Syria back in 2011.

By then Omar was playing at Glastonbury and recording remixes for Björk – embraced by the West for his thumping dance songs about love.

His music mixes dabke and other Middle Eastern styles into something that eludes categories, but the one thing it doesn’t do is address the conflict in Syria. Until now.

Omar’s new album To Syria With Love – his first release on Diplo’s Mad Decent label – is an emotional tribute to the people of his country, expressing the heartache that its current state causes him. [The singer moved to Turkey in 2013 after his hometown – Tell Tamer in the Al-Hasakah region – became a war zone.]

But although its pumped-up production and emotional sensibility marks a new phase in the singer’s career, the no-nonsense approach is going nowhere. 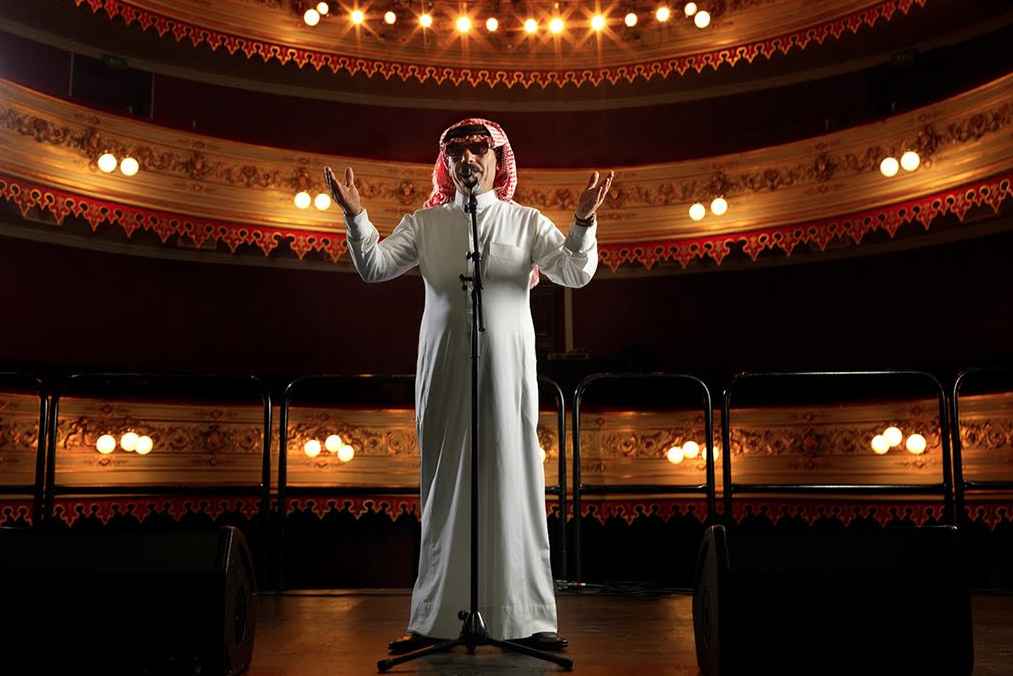 Omar realises that he enjoys a platform few Arabic musicians ever reach – which he’s grateful for, if not a little bewildered. It’s just that interviews aren’t exactly his thing. The man has no time for pretence in any form.

That includes opening up in soul-baring interviews conveyed via a translator. Still, we’re happy to have a word with the chain-smoking legend all the same.

How do you think your sound has developed over your career?
Well, my music has not changed very much at all over the years. I stay true to my traditions. But some circumstances around my music have changed.

For example, when I started recording in professional studios and with professional producers in the West – the music received a really great sound, which I always dreamed to have.

It’s just that we never had these kind of capabilities [in Syria]. Also recently – about one year ago or more – I started working with a new keyboard player and he is really special. His name is Hasan Alo.

What do you think made you such a success at weddings? And how did that translate to the wider music world?
When it comes to weddings, my road was not so simple and quick. But as our region was very mixed with different sects, religions and customs – I adopted and tried to adapt to all of them. The Kurds, the Christians, Assyrians, Muslims – all. I sang for all of them and according to their preferences. I still, as often as I can, sing at weddings.

I’d say for one that they always focus on dabke alone – even though we have so many other kinds of styles that we are always performing and recording.

Also, they always credit me for some reason with ‘modernising’ the style – it really isn’t me. The style has evolved like this on its own. This is the sound of our region and of our tradition.

What are the biggest challenges you’ve faced? And how did you overcome them?
I don’t have many challenges. I had a lot of help always from people who are with me.

How has the US travel ban affected your life and work?
Thank God, it hasn’t so far. I just was on a big tour of the US and it was wonderful to be there. I thought it might all have to be cancelled some months ago – but it did not happen. I am glad for that.

What keeps you positive?
I am happy and thankful that I can support my family and friends.

What is your biggest regret?
I don’t have any.

How would you like to be remembered?
I would say for the music only and the joy that it has brought. 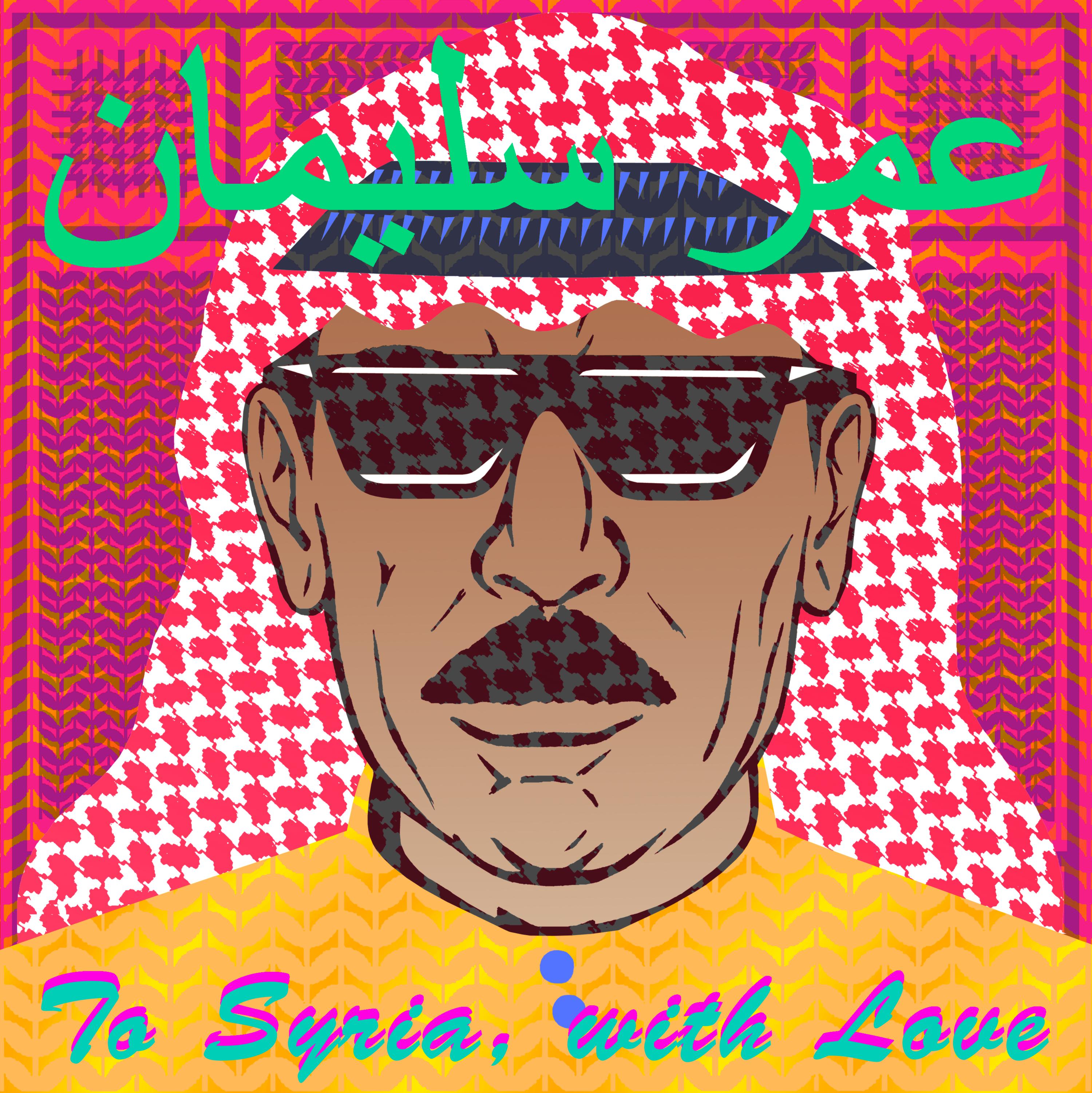 How do you balance the part of this that’s expressing yourself with the part that is trying to maintain a job?
We do not see it really as art – it is just traditional music that many people love. In the Western world, maybe they call it art…

Do you feel like you have anything left to prove?
I don’t have to prove anything – I just will continue singing.

Omar Souleyman plays Field Day London on Saturday, 3 June. His new album To Syria With Love is out on Mad Decent.

Linkedin
RELATED ARTICLES
OTHER ARTICLES
In his 2008 series, the photographer pictured himself as Angela Davis, Martin Luther King Jr., Malcolm X, and other prominent figures.
The workforce is now gearing up for industrial action after receiving a measly pay rise, reports Ella Glover.
Photographer David Corio’s archive offers a glimpse inside a revolutionary era of music and nightlife.
Thousands of protestors gathered in Westminster to express their sadness and fury at the fatal police shooting of a young Black man in Brixton.
Ahead of the release of their first collaborative album, the producer and rapper talk psychedelics and the state of UK hip hop.
Following the announcement of an 80% hike in the energy price cap from 1st October, crowds gathered outside the offices of energy regulator Ofgem to protest and declare their intention to undertake a payment strike.