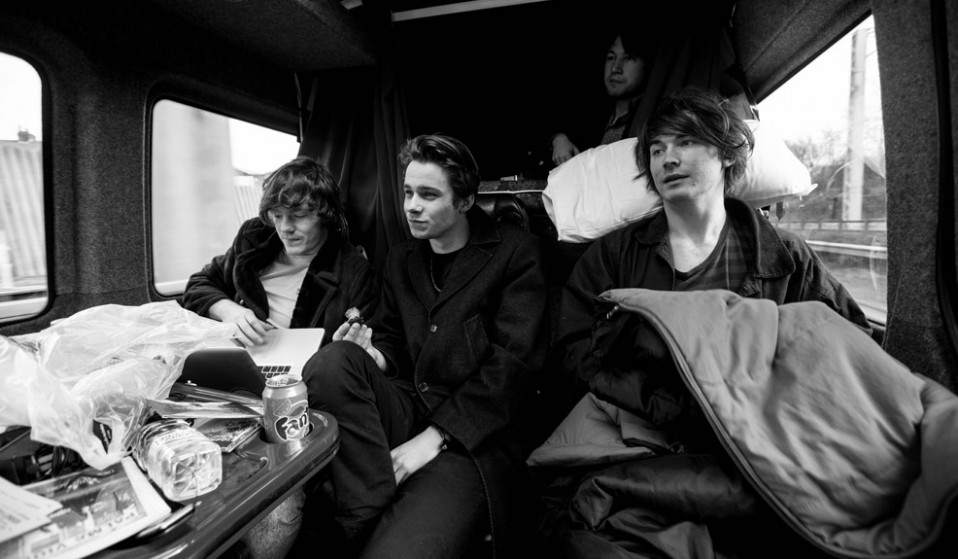 Huck spoke to Palma Violets' Chilli Jesson about making it big in a crumbling industry and second album fear.

Huck spoke to Palma Violets' Chilli Jesson about making it big in a crumbling industry and second album fear.

Palma Violets have been hailed as the saviours of guitar music. But the band’s rise to fame was anything but traditional. “We literally wrote six songs, got signed by Rough Trade, wrote another four in the next couple of weeks, released the album a month after,” says bassist and co-frontman Chilli Jesson.

Since then, the band has gone on to sell out headline tours, win two NME Awards, and be nominated for the BBC’s Sound of 2013, whilst still retaining their South London roots and indie spirit. But now the time has come for them to prove themselves and follow the hype with a second album. Is that something they’re stressed about? “I think that most bands would be terrified of releasing their second album, just because of the pressures that are added,” says Chilli. “But Geoff and Jeanette, who run Rough Trade Records, came to us as soon as we’d released our first album and told us they wouldn’t release our second record until we were ready. That gave us a big confidence boost, and confidence is normally the reason you get so many dodgy second records.”

Unlike the speedy genesis of their first album, the band – now consisting of bassist/vocalist Alexander “Chilli” Jesson, guitarist/vocalist Samuel Thomas Fryer, keyboardist Jeffrey Peter Mayhew and drummer William Martin Doyle – have spent time on their latest baby. “With this, we ended up writing about twenty songs over three or four months,” says Chilli. “We went into the studio with John Lackie, who is a legend, and he brought out a lot more in us than ever before. It was totally different, everything has been thought out quite a lot. It’s still the same roughness. Your first record should be a moment in time – I hate first records that sound all fucking polished and clean. With this record, it’s a lot more thought out.”

The new release comes after an extensive time on the road. By the end of summer 2013, the band were exhausted from a year and a half of non-stop touring. “I didn’t really sleep for a year and a half, nor did anyone,” says Chilli. “We’d played 360 gigs in 365 days, we’d played more shows than anyone that I knew, so naturally things became frayed. I always compare mine and Sam’s relationship to a marriage, because we’re so close together for so long. It got sorted out after we played Reading Festival 2013 and we were on this bus and we hadn’t written a song for a long time, and I was just thinking that we should be writing. We got off the bus at this farm in Wales, and literally lived on top of each other. Most people would think you’d be fucking mad to do that but it was the best thing I think we’ve ever done as a band. We rebuilt our relationship and once we got into the flow of writing songs it was good. Without songs, you’re nothing.”

So what’s their songwriting secret? “Writing the first song was probably the hardest obstacle you have to face as a band who hasn’t written a song in a year,” he says. “Once you’re over that mark, then it’s pretty easy. I didn’t think I’d be able to write another song, and neither did Sam, and that’s where most of the problems and anxieties in our relationship were. As soon as that was dealt with and figured out, it was on the straight and narrow from there. I feel like we’re stronger for it. I think when I am finally married it’s going to be fucking easy for me after that.”

Chilli still finds making music as exciting as ever: “Even more exciting, because we’re up against it now. I just know more, and know how to craft a song now. Before I was just winging it the whole time, and I’m winging it still but I’ve got way more of an understanding. It’s just so enjoyable. It can be really tough when your back’s up against the wall. I’ve written stuff on this record that I fucking can’t believe that we as a band have managed to do, it’s a big achievement for us.”

Does the crumbling music industry give him cause for concern? “It’s pretty fucked, I think. But I think it must be changing in the right direction. I really dislike it, we’ve always been quite outspoken about it, and now we have to do fucking Facebook and all that shit and I hate it. We could refuse to do it, but we’ve got to sell records to make the next one, and it really helps, this sort of thing. I can’t imagine anyone reading what we write on there, but it’s a good platform, especially if you’re a band who plays over in America, I suppose it makes it a little easier. It makes it so much less exciting though.”

The band don’t see themselves as politically-charged. “We’re too young for that shit. I feel we live in a time where everything is so politically correct, you can’t fucking say anything damning and then when you do, you’re perceived as try-hard. I really don’t want to be a political band. Maybe some time, but not now. I’ve still got a lot to learn about love and lust and emotion, those other things that I think people around the world can relate to. The feeling and emotion of music is more powerful than someone ranting a political statement. Feeling is more important for me than anything else.”

What does he think about the gentrification of London? “I think it’s terrible. Even when you walk down Portobello Road, that’s fucking changed. I think it is bad and there’s a lot less bands from lower classes, it’s all very difficult and very expensive to start anything up.”

Palma Violets’ second album, Danger In The Club, is out on May 4th on Rough Trade Records.

Linkedin
RELATED ARTICLES
OTHER ARTICLES
Canadian four-piece Viet Cong, featuring former Women and Chad VanGaalen musicians, reveal some of the motivations behind their controversial output.
Toronto trio Badbadnotgood take jazz and hip hop to new places through collaborations with Tyler, The Creator, Ghostface Killah, Danny Brown and DOOM.
We put lead singer Ryan Lindsey through the Suburban Youth Pop Quiz to get his take on life before punk.