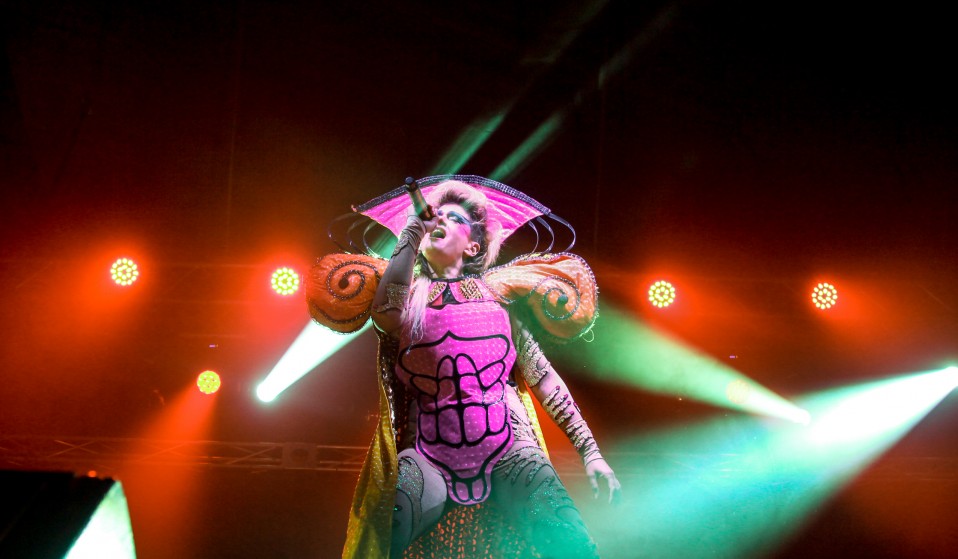 We caught up with Berlin-based musician, performance artist, progenitor of modern female sexual empowerment in pop Peaches at Primavera Festival in Barcelona to chat about the frontline of the fight against modern patriarchy. And riding hot dogs.

We caught up with Berlin-based musician, performance artist, progenitor of modern female sexual empowerment in pop Peaches at Primavera Festival in Barcelona to chat about the frontline of the fight against modern patriarchy. And riding hot dogs.

Imagine this. It’s the year 2000. In the UK popular music is going through a peculiar time with the charts dominated by classics like the Dane Bowers-Victoria Beckham abomination ‘Out of Your Mind’ and the transcendental ‘Big Brother UK TV Theme’. Popular artists include Britney and Lolly and post-American Pie jock rock Bloodhound Gang.

So now, 16 years on, does she feel like the landscape has changed? “I think more people are taking responsibility for what they’re doing and giving less ownership to what they think people want as opposed to what they need to do or what they want to really say,” she says after a little thought. “Pop stars are more and more taking control, instead of record companies, which are dying anyway, telling them what they need to do or who they need to be. I never wanted to be on a major label for those reasons. I didn’t want them to tell me I was too weird, and I had to water it down, or too old to perform. I couldn’t be me on a major label. Although I know now they’ve used something about what I’ve done to tell artists to be a little more transgressive. I guess it’s kind of trendy now.”

We’re sitting in the Spanish sun at Primavera Festival, Barcelona – which Peaches describes as “an amazing place with people who want to stay up really late and party… a place that knows what it wants” – and the Peaches here today is characteristically glamorous and eclectic, despite coming straight from the airport, with her hair backcombed into a sort of mohawk-mullet.

Many of her huge pop star fans are well documented – Pink, Christina Aguilera, Lady Gaga – but I’m intrigued to see what she thinks of Disney star-turned-LGBT advocate/cultural appropriator Miley, whose own sex-positive transgression, however problematic, could be traced back to the Peachsplosion. “I think she has really good people behind her and has grown up as a child star and now realises she can do whatever the fuck she likes,” she says. “She was smart in getting good people behind her. What interests me the most about her is what she does with her money and time off stage, like starting funds for LGBT and trans teenagers because they’re homeless because they’re not accepted by their families. Also it’s always been a dream of mine to ride on a hot dog and she’s done it so that to me is just amazing.”

Is there a chance that some of these artists are jumping on a sort of transgressive bandwagon though? If old-school sex sells, does new-school sex sell even better? “Yes it is trendy and I’m sure there are a lot of people who are trying to get in the groundfloor of gender fluidity or whatever but I just hope it’s not a trend and we dig deeper into it and understand more,” says Peaches. “There are places like Ireland that have one doctor who is helping trans people. We need to overhaul the whole system. Everything is patriarchal, or fraternising with the patriarchy – the music industry, festivals, all of it. There are still these last little bits of patriarchy hanging on and this whole system needs to be overhauled.”

The light is fading and soon Peaches must depart and costume up for her wild performance at the Heineken Hidden Stage, which – despite a six-year hiatus between last album I Feel Cream (2009) and her most recent Rub (2015) – will be bombarded with fans who turn up early and wait for hours for a good glimpse of their exhibitionist princess. With a career that now stretches over 25 years it would be easy to assume Peaches may have tamed or fallen out of touch with the queer frontier but a quick look at her recent music videos – which feature graphic hairy lesbian orgies, vaginoplasty, and a new one for ‘How You Like My Cut’; a beautiful and titillating celebration of androgyny – prove she is still lunges and catsuits ahead of everyone else.

It would also be easy to assume she also feels burnt out or disillusioned with the industry and although she definitely seems exasperated with certain aspects there is an overwhelming amount of hope and fire in her attitude towards that, which is inspiring. During our chats she mentions that she’d love to collaborate with Yoko Ono and tells me excitedly about this video of John Lennon, Chuck Berry and Yoko where the boys are bro’ing down and Yoko just starts screaming (to the shock of everyone on stage) into the mic to literally disrupt the voices of power. You should see I-film-women-in-the-toilet Chuck Berry’s face. Hilarious. Later on she also applauds Springsteen for cancelling his concert in North Carolina because he was disgusted by the backwards bathroom laws – “Of course he always stood up for unions and workers, which is important, but you wouldn’t think Bruce Springsteen would stop a huge concert for that and to me that’s a big statement.”

So I want to know; what does she think is the frontline in the battle against the patriarchy in 2016? “The 1% hoarding money and doing everything they can to keep it in their favour,” she answers immediately. “People like the Koch brothers in America who say things like, ‘Let’s raise the retirement age to 70,’ which is a horrible idea. The lies that are spread just so people can keep their money. The superdelegate situation we have so that the elite can keep their power. I always get into America because it seems like such a good example. Bernie Sanders is super fascinating. It’s really amazing to see all the young people follow him and understand more than anybody that the change needs to happen.”

And what about the others? The ones who will vote for grab-her-by-the-pussy Trump on November 8? “People get scared because they’ve been pushed that way their whole life,” she says empathetically. “They don’t have a choice, they want to be taken care of. It’s not just rich people voting for Trump. It’s hard when you’re poor and you’re struggling, but Trump is not going to do anything for a poor group of people. People have to start taking responsibility for themselves. I don’t understand how people don’t get it. But they will.”

Get your tickets for Primavera Sound 2017 on the website.

Peaches is currently on tour around Europe and Australia. You can buy tickets here.

Linkedin
RELATED ARTICLES
OTHER ARTICLES
After blocking the Scottish government’s gender recognition reform bill, Westminster is now devising further changes to the law to make it harder for trans people to self-identify.
Since 2007, Gideon Mendel has made 20 trips to document floods in 13 countries. The result is an alarming record of what has already been lost to the climate emergency.
Following the release of his debut single, Deyaz talks battling addiction, dealing with his struggles through music, and building a budding music career from his living room.
Social prescribing connects people with non-medical support to improve their health and wellbeing – but some experts worry it’s just a stick plaster solution.
A new exhibitions brings together the work of photographers who documented the deep unrest of these pivotal decades.
A new film from Berghaus traces the story of Adam Raja, who left behind a turbulent upbringing to discover the healing power of climbing.