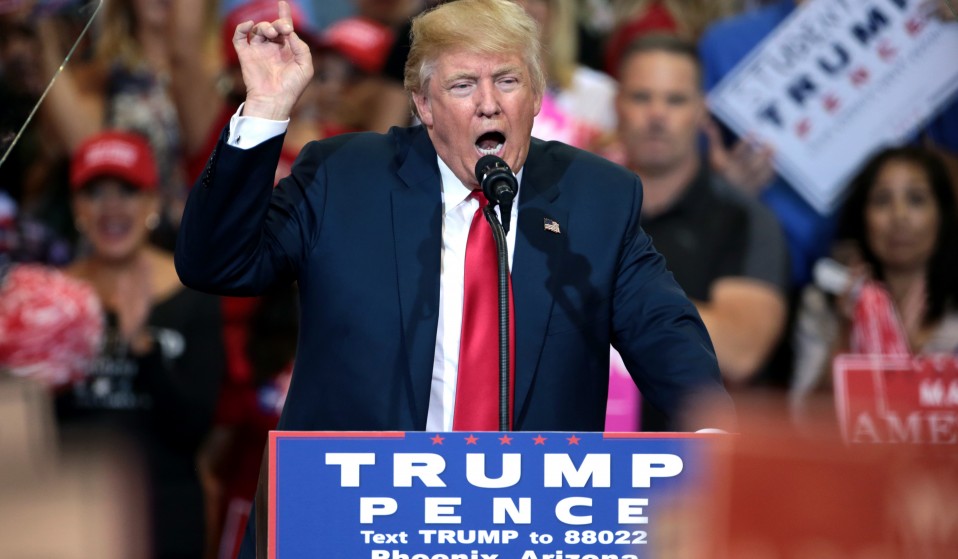 With Donald Trump's inauguration as President just a matter of hours away, the final musical line up for the ball that's set to follow has finally been announced. Problem is, you've probably never heard of anyone performing, so here's all you need to know about the bands.

On Friday 20 January 2017, Donald Trump will enter the White House as the 45th President of the United States. Yes, despite not winning the popular vote, not having any coherent policies, and insulting pretty much everyone who’s not a straight, white American man, Trump has made his way to the White House.

As is traditional, there’ll be a soundtrack to Trump’s inauguration and the ball that follows, as musicians and artists from across the land of the free come together to celebrate America finally being made great, again.

Just eight years ago Obama’s inauguration played host to some of America’s most talented and respected musicians: Beyoncé Knowles, Bruce Springsteen, Mary J Blige, Usher and Stevie Wonder all took to the stage. U2 were also performing. Obama might be on his way out of the White House, but even his final receptions have seen the likes of Solange, Chance the Rapper and John Legend paying their respects.

In the build up to Trump’s swearing in as POTUS, the rumour mill went wild when it came to who’d be performing at this, let’s say monumental, event. It seemed that team Trump were also keen to have a star-studded celebration. The problem was, nobody seemed overly interested in attending.

Moby offered his services to Donald, on the condition that Trump release his tax returns. Rebecca Ferguson was up for the gig as long as she could sing Billie Holiday’s anti-racist anthem “Strange Fruit”. Unsurprisingly, neither of these artists has made the final cut.

Charlotte Church, Elton John, R Kelly, Celine Dion and Kiss were all reportedly asked to join the lineup, but each refused. Even a Bruce Springsteen tribute act pulled out last minute. Not to worry though, Donald has it all in hand, preparing a bill of some of your favourite acts to help drown out the hate-filled noise coming from the soon to be President.

The thing is, you probably won’t recognise anyone who’ll be wielding the gold-plated microphone, so we’ve prepared a handy list to make the occasion easier to follow.

The headliners of this ramshackle affair, this Mississippi post-grunge rock band did, to be fair, have a track make number three in the US Billboard 100… back in 2000.

This country singer is exactly what we all expected from Trump’s inauguration; his favourite subjects being freedom and America, very on brand for Trump. Somewhat surprisingly though, Keith referred to Trump just last year as a “whore” in a “dumpster fire”. Maybe it was just fake news…

The R+B performer was a surprise addition to the lineup, having worked with Jay-Z and John Legend in the past. Taking to Twitter as the announcement was made, Chrisette explained how her “heart is broken for our country, for the hopes of our children, for the fights of those who came before us”. She says she’s willing to be a bridge, but one can’t help but wonder if she’s just willing to take the fee.

Seemingly desperate to fill out the line up, Trump could count on good old patriotic Lee Greenwood, your favourite super-patriotic all-American country singer to grace the stage, considering he’d performed at Reagan, Bush and Bush Jr’s inaugurations too. We’ll all be hoping to hear his patriotic hit “God Bless the U.S.A”, which sounds scarily like “Freedom isn’t free” from Team America, which is probably because he’s patriotic.

An America’s Got Talent runner up from seven years ago.

This country duo has a history with Republican politics. Band member John Rich wrote McCain’s much-loved and super successful 2008 campaign song, and later won the 2011 series of Trump’s reality show, The Celebrity Apprentice. “Big” and “Rich” also happen to the the only two words in Trump’s Russian Tinder bio.

Rapid-legged dance extraordinaire, Michael Flatley will be jigging alongside the Riverdance cast at the ceremony. As one Twitter user put it: ”I’m glad Michael Flatley is going to dance for Trump. It means my previously irrational dislike of the man now has a rational basis.”

Having not released a song since the 1970s, this American show business professional (as Wikipedia describes him) has surprisingly relevant songs for the occasion, including “Chills”, “At The Edge of Tears”, “What Am I Gonna do” and “Tell Me What Can I Do”.

One of America’s most respected dace troupes, The Rockettes had no say in whether they’d be performing, considering their boss is an old friend of Trump’s. You’ll be able to spot the forced smiles on their faces.

We couldn’t be bothered to read their rambling justification for accepting the invite, but they do say they looked to Jesus for guidance which will reassure everyone. “We’re still doing what we’ve always done – playing for anyone who will hear our musical message”, they say, and anyone who’ll pay them a fee it seems.

Sam Moore (of Sam and Dave)

This guy did once release some certified bangers. Classics like “Soul Man” and “Hold on, I’m comin’” are tracks that you will actually recognise, in contrast to pretty much every other performer. Moore is urging Americans to “unite behind [the] new President and give him a chance”.

We literally couldn’t find anything interesting about Tim Rushlow.

Another performer who’s only playing because Jesus told him to.

Dj Ravi Drums is a Dj and drummer named Ravi.

Linkedin
RELATED ARTICLES
OTHER ARTICLES
With hate crimes on the rise and trust in the institutions tasked with dealing with them swiftly declining, a new street defence movement is coming out to protect queer Londoners from violence.
For the past 10 years, Syed Shahriyar has documented the Indian subcontinent‘s bloody conflict. Despite the dangers, he’s determined to document life there for future generations.
Photographer Simon Murphy discusses his project which aims to shed new light on the maligned and often misunderstood residents of a vibrant neighbourhood in Scotland.
Photographer Yoshi Yubai discusses his new book, a collection of almost 200 gritty black and white street photographs that capture the spectrum of life in the Californian city.
After hearing about some of the difficulties children were facing in lockdown, Bex Day decided to document subjects all under the age of 13 to explore just how significantly their lives had changed.
Photographer Fei Alexeli recalls travelling from her hometown in Greece to the Californian desert, where she captured the abandoned buildings and empty towns dotted around the vast landscape.