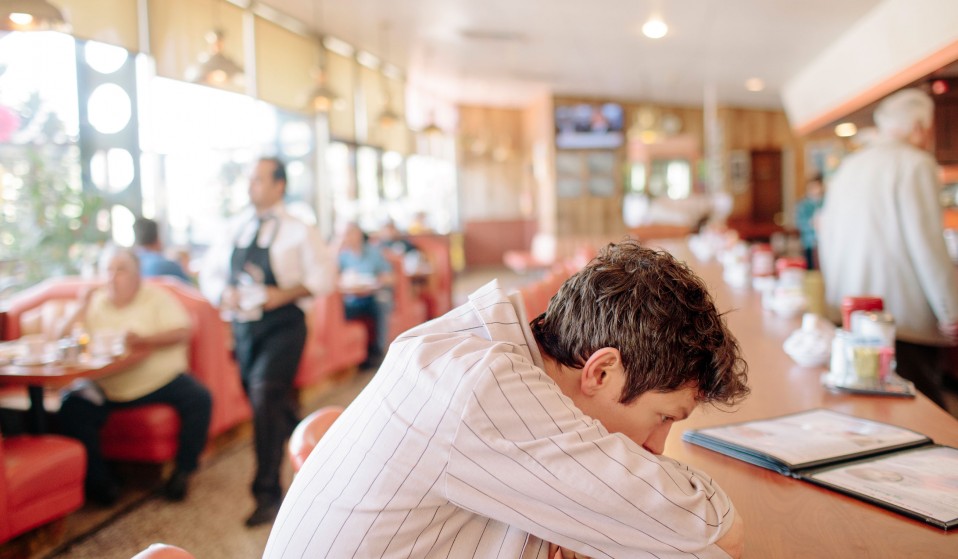 Outcasts often seek shelter in the music of Perfume Genius. But after finding stability in his own life, Mike Hadreas has realised that sobriety doesn't fix everything. It just casts a harsher light on the underlying problems.

Outcasts often seek shelter in the music of Perfume Genius. But after finding stability in his own life, Mike Hadreas has realised that sobriety doesn't fix everything. It just casts a harsher light on the underlying problems.

Mike Hadreas opens the door to his chic East London hotel room looking mischievous. He’s halfway through “like a $40” room-service breakfast that involves scrambled eggs and blueberries, appearing both giddy and nervous at the thought of his label Matador picking up the tab.

Last night, around 2am, he flooded the bathroom after leaving the sink running while he lathered up in the shower. Staff had to be called upstairs. Now, wearing a cream woollen jumper and blue jeans, Mike grimaces about having created a ‘situation’.

This is not a spoiled pop star running amok, but a case of cabin fever. Mike’s reached the end of a month-long press tour to promote No Shape, his fourth record as Perfume Genius.

It’s no surprise that everyone wants to talk to him about it – it may be the best record of 2017, and certainly the peak of a distinguished career.

Mike made his name with desolate piano balladry, which he transformed into abrasive outsider pop on 2014’s Too Bright. The textures on No Shape are softer but still overwhelming – Kate Bush circa The Dreaming, Bowie’s Low, Mary Margaret O’Hara’s Miss America, Enya’s Shepherd Moons and Sofia Coppolla’s Marie Antoinette all feel like good reference points for its opulent, rapturous and, above all, romantic sound.

Although he’s immensely proud of the record, Mike can’t wait to get back home to Tacoma, Washington, where he lives with Alan Wyffels, his boyfriend of eight years and frequent musical collaborator.

Too Bright framed Mike’s sexuality in provocative terms. The line “no family is safe when I sashay” from ‘Queen’ felt instantly iconic – even more so when he performed it on The Late Show With David Letterman wearing heels, lipstick and a flared white suit over a leather collar.

But on No Shape, Mike is uninterested in engaging with the homophobes who have hounded him since his teens – the classmates who sent him a letter refusing to treat him as human until he stopped sucking dick; the teachers who did nothing about it; the people who violently attacked him two years after dropping out of school. 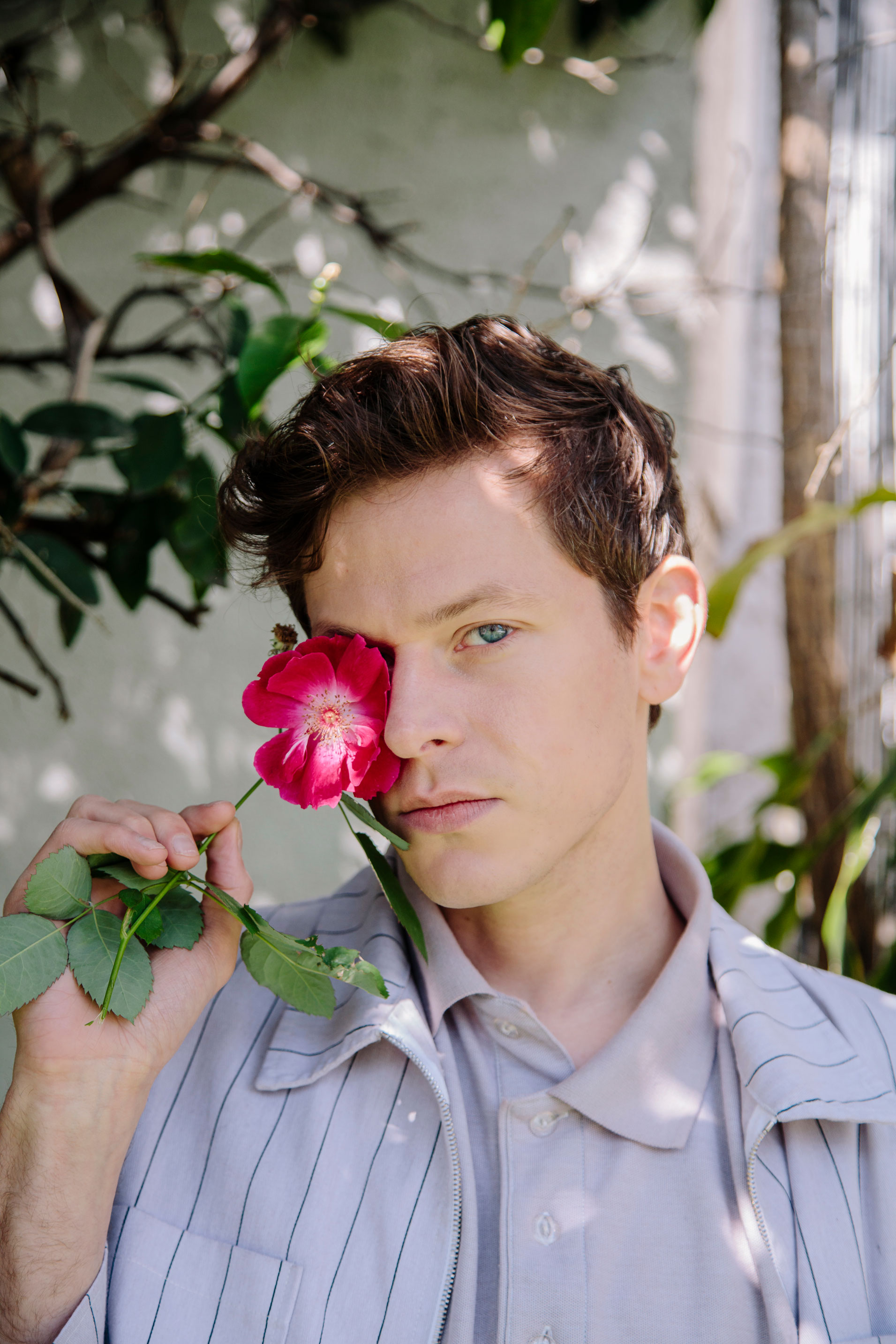 He has a new survival technique for the everyday comments and stares: “If we never see them coming, we’ll never have to hide,” he sings on the rushing, baroque ‘Slip Away’.

“I’m super into the idea that maybe I don’t need to convince people any more, or to explain what I mean,” says Mike, sitting on his room’s small couch.

“I can just be. There’s something really freeing about that. Lately I don’t have any compassion – I never really did – for the other side [his aggressors]. I don’t feel the need to lend them an ear or think about it any more.”

Some of this is Mike talking himself up but, since Too Bright, he’s noticed a shift in his thinking. “Maybe at some points when I was writing, I was carrying the wrong people,” he admits.

No Shape was recorded before Trump’s presidency. If he’d made it afterwards, he might have engaged more overtly with hatred, but this album is more about “singing with everyone, singing with people I love and people that I’ve always felt the music was for.”

First and foremost, that’s Alan. “I’ve realised I’ve been with my boyfriend for a long time and, no matter what our life situation is, it is very easy to take someone for granted when you’ve been together that long,” says Mike.

“I think I’m in my head so much that I don’t give that proper attention or kindness sometimes. I wanted to write some music that paid respect to that more. It’s such a specific feeling, that trust and comfort. Alan, whenever I get into bed, will automatically – even if he’s asleep – kinda grab onto me. It’s weird – it’s so instinctual, like we’ve been together so long that he just knows it’s me. I like that. It’s one of my favourite things.” 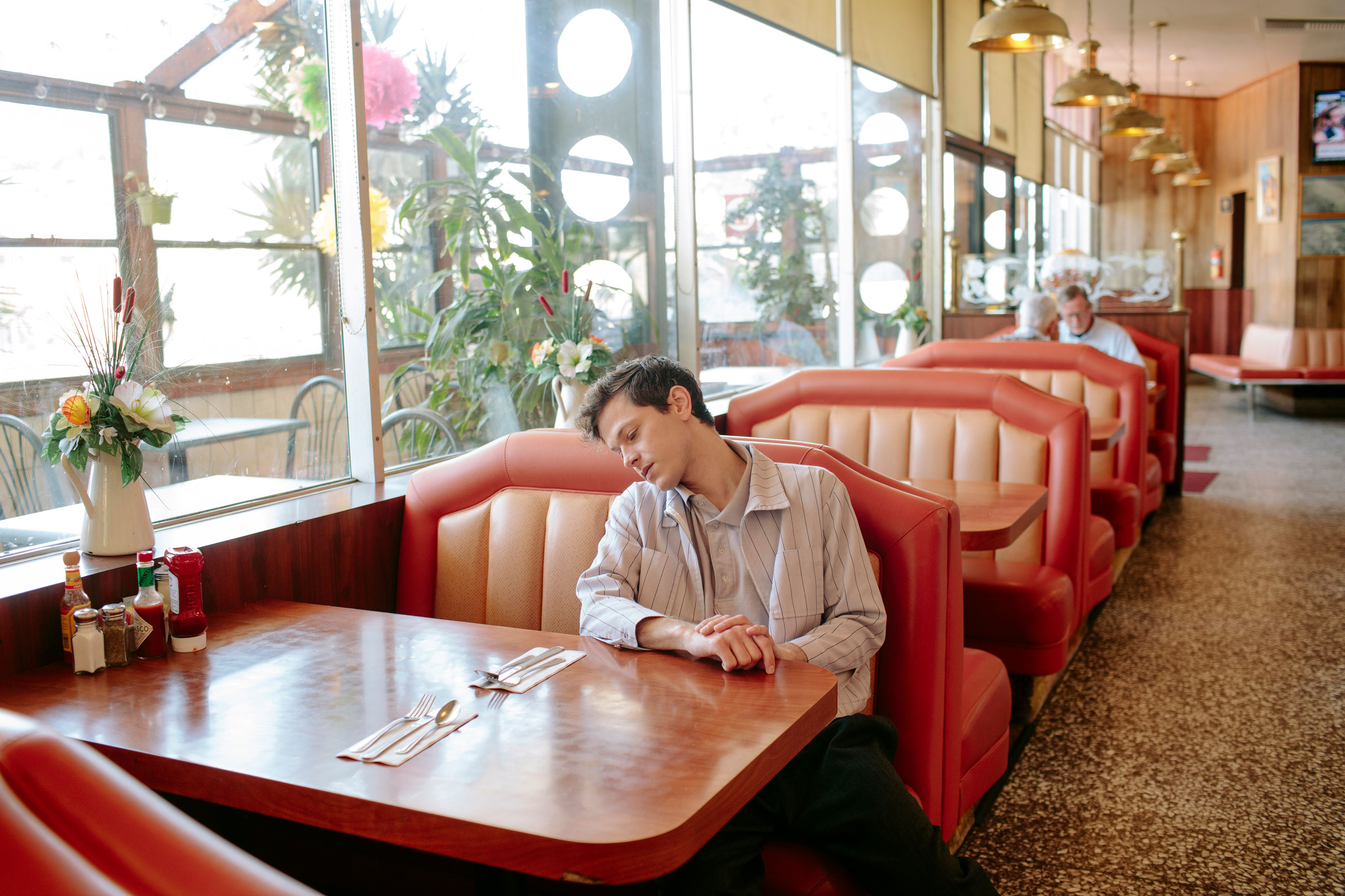 There’s a song at the end of No Shape called ‘Alan’. Over an ambient haze of piano and cello, Mike asks, “Didn’t you notice? We sleep through the night,” shellshocked and mumbling, as if singing through a bruised lip. “We’re here/ How weird,” he calls at the song’s climax, stretching and twisting the words to sound ecstatic and agonising at the same time.

They’ve survived a lot. The couple met as recovering alcoholics and users (everything but heroin), and became each other’s support network on the path to sobriety. After the terrors of high school in Seattle – with only journals, Liz Phair, PJ Harvey and his mum for comfort – Mike had moved to New York and found a life, found acceptance, in the city’s queer party scene.

He burned bright, burned out, went broke, and had to move home, where his mum and stepfather were also recovering alcoholics. He got sober, started posting music to MySpace, got signed to Matador – then relapsed again. Mutual friends introduced him to Alan. He took Mike to AA meetings, where he met older, happy gay men for the first time: their lives illuminating a better future.

The couple are both 35 – hardly old – but on No Shape, Mike has become comfortable with leading by example for his devoted audience. “I grew up and a lot of the things I read, especially in gay and queer literature, was about hustlers and junkies,” he says.

“So many songs are written about young love and the beginning of love; a lot of gay art especially is about young bodies and people glistening by the pool… But I wanted to write music that was about different sides of things, about love that’s more lasting and gentle.”

No Shape is an album about believing in happiness in a world that would deny it to you: “Stealing moments for yourself that are sort of outside the rulebook,” says Mike.

Putting those feelings in a record felt like “making a world where those things are more immediately true… you know what I mean?” he asks, his big blue eyes holding a serious gaze. “Because you have to puzzle that out, to work at remembering and seeing those things in daily life. So I wanted a document where all those things are just there.” 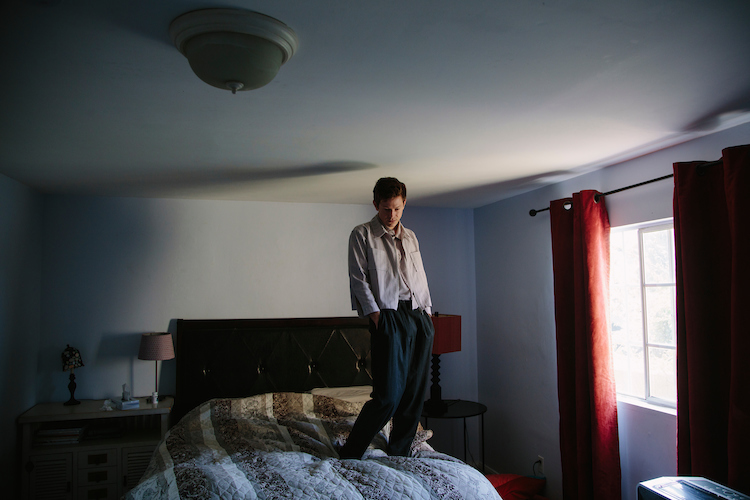 Not that it came easily. Past Perfume Genius records found Mike writing about the darkest parts of relationships: his best-known song may still be ‘Mr Petersen’ from 2010’s Learning, a partially true story about a teenage relationship with a teacher who later killed himself (Mike has never confirmed which part is true). On ‘Dark Parts’, from 2012’s Put Your Back N 2 It, he sang about his mother’s sexual abuse at the hands of her father.

Last summer, Mike had the music for No Shape, but the lyrics weren’t coming. “I thought I had to go back into my past and all of these songs had to be about something fucked up,” he says. “Like that’s what I do.”

“I think it’s much easier to write something shocking and disturbing,” he continues. “You can put a knife in something and be like, ‘Check it out!’ And everyone goes, ‘Oh, that’s scary’, you know? But I thought about all the things that I’ve read and loved that made my heart swell up, or were a little more ecstatic in a joyful way without being cheesy or corny, and so I kinda tried to see if I could do that.

“But it feels weirdly more scary to share. Even though I was talking about things that were very dark or maybe not great that happened to me, at least they had already happened. There were ways to fix them. This is more me trying.” 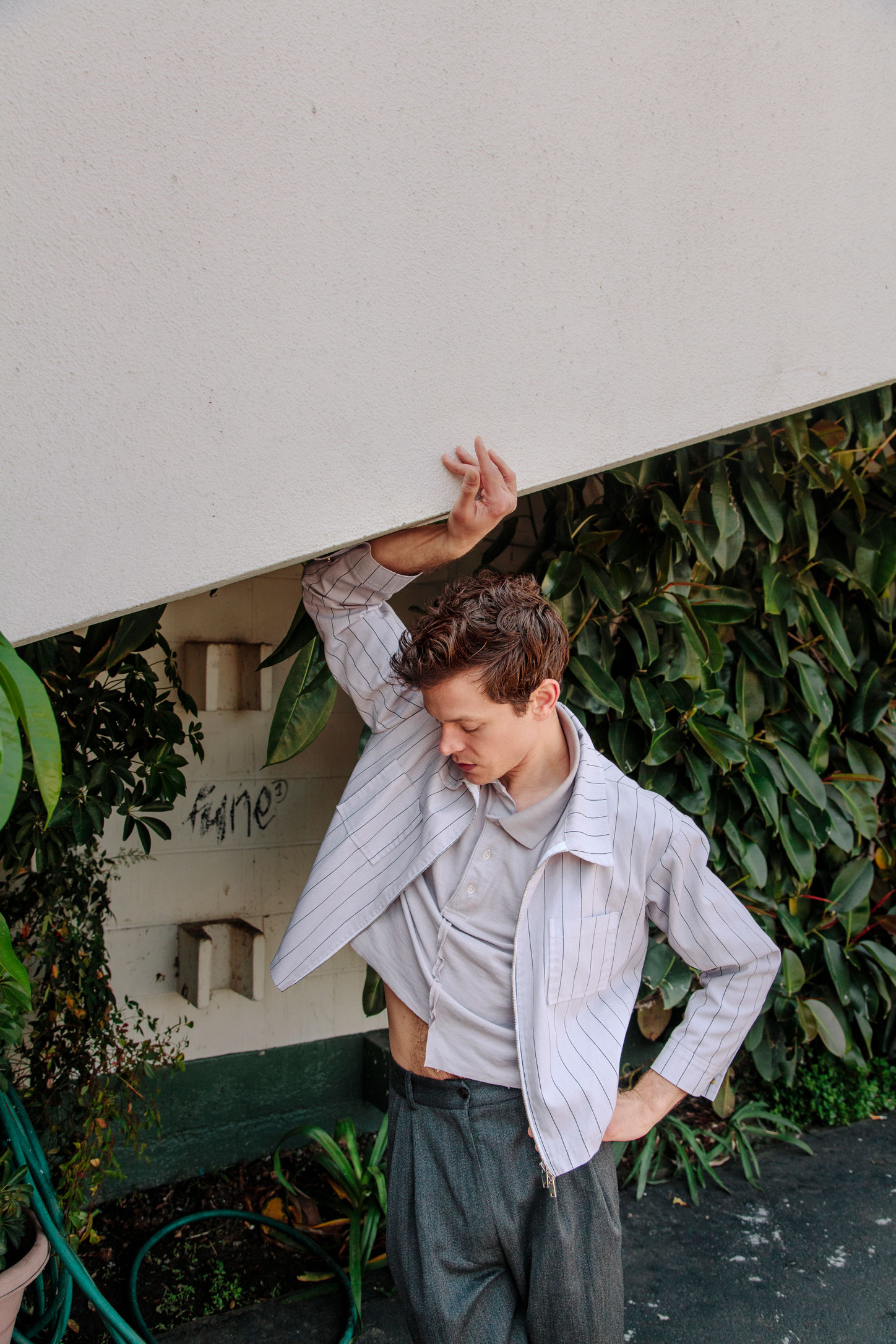 Where much of No Shape strives for romantic liberation and freedom from other people’s judgemental gaze, elsewhere Mike panics about his inability to dream – to get free.

“Something keeps me locked and bodied/ Pawing at the edge,” he pants on ‘Choir’, as chopping strings and haunted calls envelop him. Sobriety doesn’t solve every problem, it turns out; it just casts a harsher light on the ones that weren’t substance-related to start with.

“A lot of the album’s about trying for happiness or approaching it, or trying to take some joy, but there’s always some kind of dissonant thing underneath,” says Mike, sighing.

“And usually, it could just be me. I’m just kind of wired to think that I’m not capable of things like that. Or that I don’t deserve it. In a way I sort of feel embarrassed writing such personal things, and being so wrapped up in my own problems.

“There’s defiance through the whole thing but the beginning of it seems very personal – not vain, but embarrassed to be thinking about things on my scale when there are so many horrible things happening on a much bigger one.”

On the album’s title track, Mike sings about wanting to “hover with no shape”, achieving a kind of metaphysical existence that frees his body and identity from the “bullshit” that he and others impose on it. Since transforming into a gas isn’t yet physically possible (to his chagrin), music has become the path to that freedom. “It feels almost scary that I’m putting everything on it,” says Mike.

In the past, he focused solely on writing and recording, ignoring the business side, but “as I think about every side of it a lot more, I feel more like a musician or an adult. I’m just allowing all my energy to go there as a way to sort of transcend,” he says, “or have something feel so big and dramatic that my daily life quiets.”

No Shape is out on Matador.

Linkedin
RELATED ARTICLES
OTHER ARTICLES
Mass crustacean die-offs in the North East have led a community of fishermen to take action to save their seas.
After blocking the Scottish government’s gender recognition reform bill, Westminster is now devising further changes to the law to make it harder for trans people to self-identify.
After building his reputation covering the US civil rights movement in the 1960s, the photographer went on to produce some of the most enduring images of the past century.
Yohon Tatum, aka Legendary Father of the House of Tisci, reflects on nurturing a new generation of talent.
Taking us through one of the most dynamic years in recent history, Laylah Amatullah Barrayn new photo book contains tender yet confrontational portraits.
Photographer Sean Maung reflects on documenting a small town in Pennsylvania afflicted by high levels of unemployment, poverty, violence, crime, and addiction.