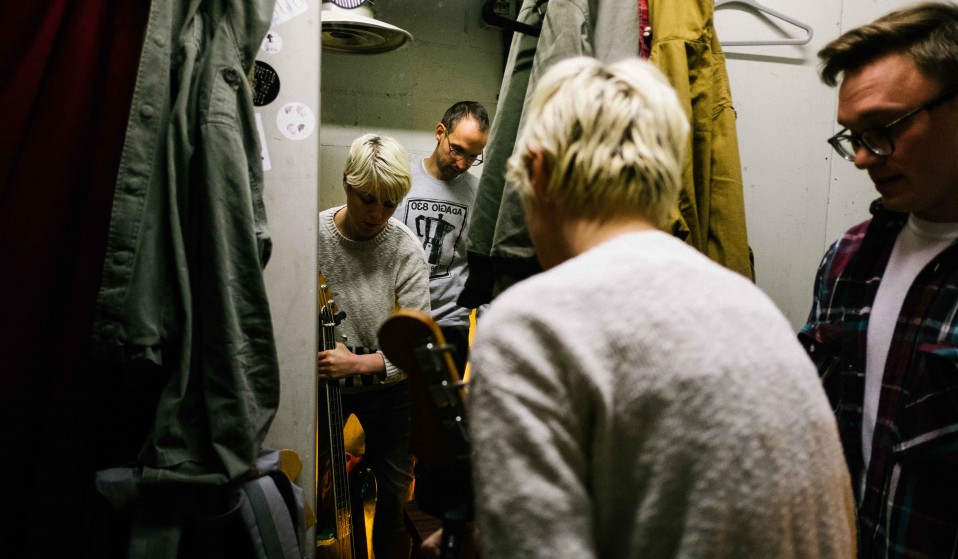 They gave up everything to become the band of their dreams.

Spending ten months a year on the road isn't easy, but together they gave up everything to become the band of their dreams. HUCK meets meets Creepoid backstage in Brighton to find out how.

Adventure comes in many guises. While for some it’s about chasing the limits of human endurance, for most of us it’s about stepping into the unknown; casting adrift from the invisible safety net that surrounds our everyday existence. And it’s this feeling of risk, of taking a chance to create something better, that pushed Philadelphia noise-gaze quartet Creepoid beyond the abyss.

The tight-knit unit (Patrick Troxell, his wife Anna – “we met through Philadelphia’s hardcore scene” – Sean Miller and Nick Miller) are enjoying a rare moment of downtime in between their seemingly endless travels. When we meet at The Great Escape festival in Brighton, they’re in the kind of delirious state that only comes with a lengthy stint on the road. “We played the Texas Psych Fest, got in the van at midnight, drove for thirty hours to Philly, flew to the UK and we’re about to play our first show, so our filters have long gone,” says Sean.

The Creepoid origin story stems from a force majeure; Sean getting stuck at Pat and Anna’s house for four days during a blizzard. “It led to us covering songs off Beck’s One Foot in the Grave out of pure boredom,” Anna explains. “And it spiralled out from that.” 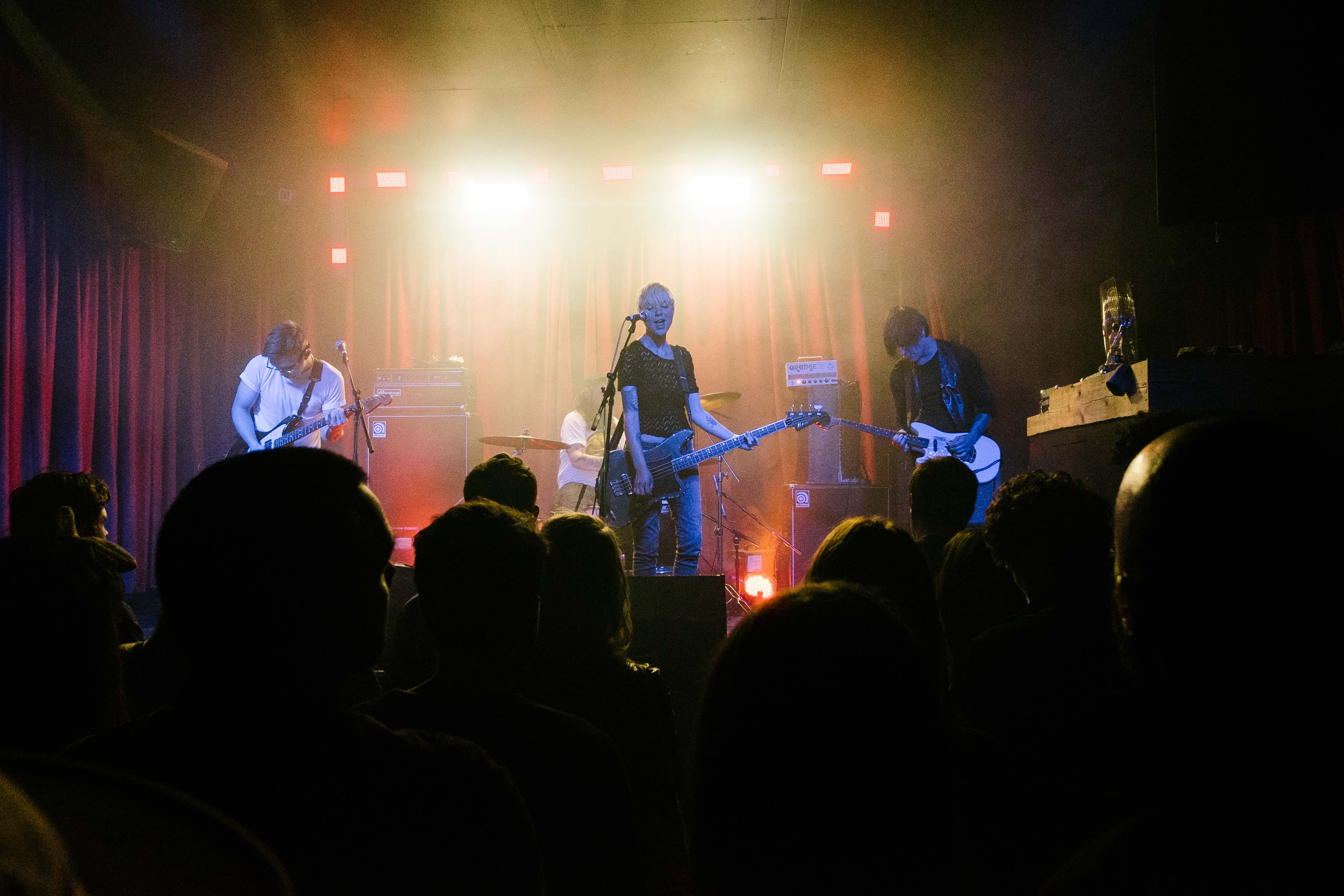 While they might not be a household name yet, Creepoid is hardly a new band, and have been together for just over five years. It’s been a productive period that’s seen them release two LPs and a clutch of EPs. But it wasn’t a time without difficulties. “I mean, we’ve always been hard workers,” explains Anna. “But we were used to being at work all day, then doing shows, getting home at five in the morning and going to work the next day,” she continues. “That’s the difference between the band in the first four years and right now, because before the music had to be in the periphery.”

Trapped in a cycle of soul-draining jobs – and unable to fully focus on their music – they hit a choke-point in their career. Things only changed when they decided to become a full-time band in July of 2014, but the transition was far from easy. “The band broke up for twenty-four hours,” they explain. “We were sick of being weekend warriors. [We thought], if we’re not going to quit our jobs and try and push this band as hard as we can then we should break up, because there’s nowhere else to go.”

But for some members, a leap into the unknown was too daunting. Unwilling to fully commit, their founding guitarist called time on the band. “It was a tough time for us all,” Pat explains, picking up the story. “It got to a point where we were getting our equipment together, and talking about how we’d try to sell it.” He continues, “I went to work for the night pretty miserable. But when I came back, Sean was like, ‘Fuck it we’re doing this.’”

A longtime friend of the band, Nick, came aboard as a replacement guitarist and the newly formed quartet was solidified. But with no jobs to support them – “We all had such comfortable lives. We all had money. We used to, like, be able to buy the good yoghurt!” jokes Sean – they made the tough decision to leave their hometown and move in together, into a new home: a large house in the more affordable Savannah, Georgia. “It focused us. When you live together and wake up every day just to write, it’s a different attitude. It requires more decisiveness,” Anna explains. But their stay in the South was short-lived. “We planned to take our time,” they say, “but we got signed, so we had a month to finish our album and on the last day of recording we left the studio and went on tour.” 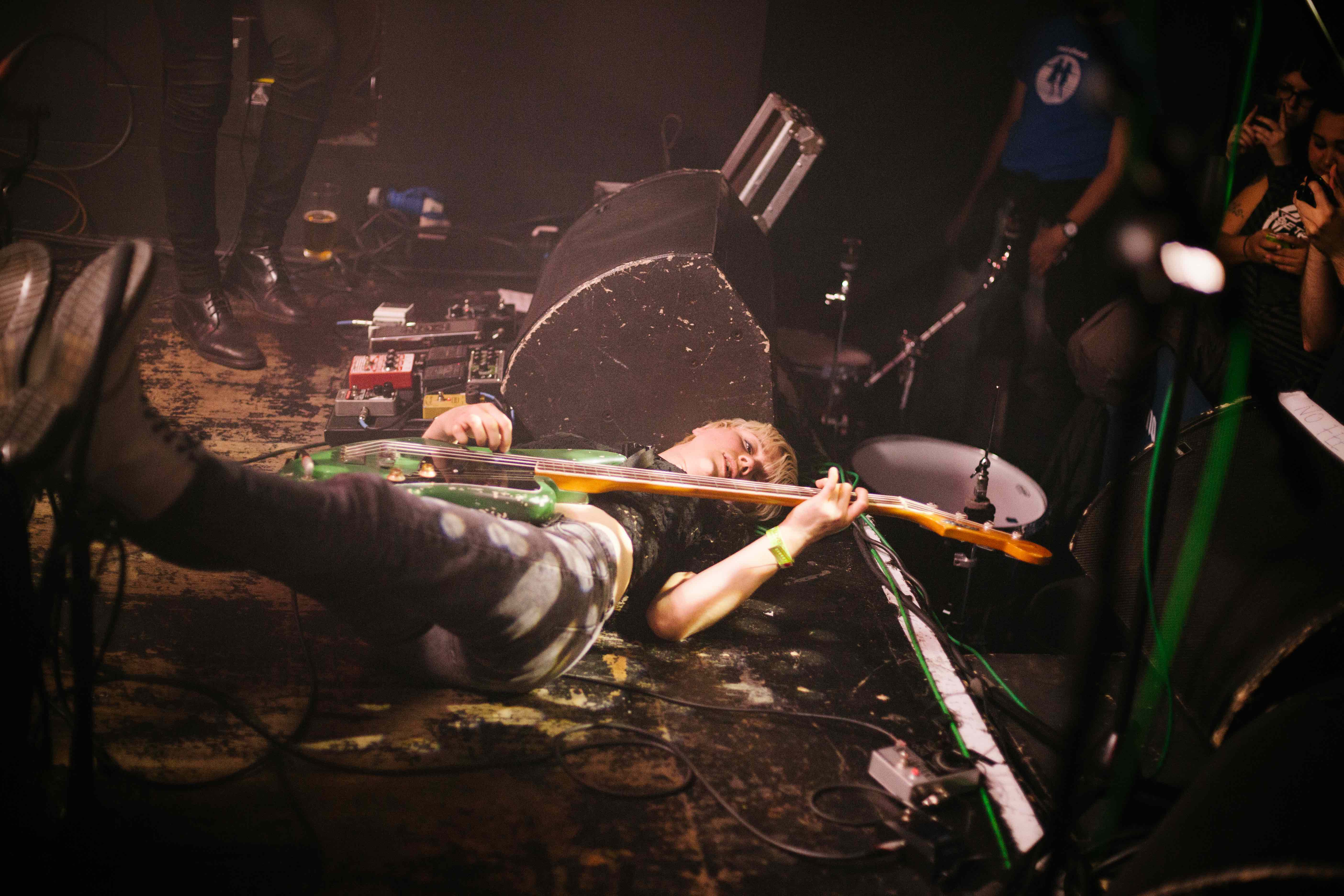 And that’s how it’s been pretty much ever since, as they’ve pushed on across America and now into Europe, through broken arms (the fallout of alcohol, Sean’s spirit of adventure and a “very deep and fundamental conversation”), arrests (a story they won’t discuss that culminated in a fan-funded bailout), shutdown shows (involving prudish Mormons and ending in a free gig in a coffee shop) and very, very few days off. “We just love playing,” says Anna. “We’ve won over whole towns that way. We’ll play clubs and people are like, ‘Come and play at our house afterwards.’ And we’re like, ‘What’s the address?’”

As a result of their leap into the blackness of the unknown the band are riding an all-time high. Their album Cemetery Highrise Slum marks a distinct shift from their back catalogue without ever feeling like a forced progression: it carries the vigor of a band renewed, and yet buzzes with the immediacy of a debut.

But touring ten months out of the year, with their belongings left in storage and no fixed address, you have to wonder if they have any regrets. Do they miss the expensive yoghurt? “Oh, no,” says Pat taking a lead on the matter. “Of course we miss our families and our pets, but I guess you just need to be able to adapt, because if you can’t then you’re never going to make it,” he pauses. “I mean, this is the best, this is what we dreamed about as kids and now we’re in our thirties we finally have a chance to do it… so we’re not going to let it go!”

Linkedin
RELATED ARTICLES
OTHER ARTICLES
With the UK now set to run out of vaccines, people working in the sex industry – particularly outside of major cities – have been left especially vulnerable, reports Brit Dawson.
Last week, Tower Hamlets council removed its nudity-restricting licensing conditions in a huge win for London’s kink community.
A new series of photos by Johny Pitts shines a light on communities and subcultures that have all too often been overlooked.
After rewriting the indie rulebook with her devastating songs about romantic longing, the singer-songwriter is now imagining a future in which the artist is no longer a product.
A sharp increase in officers armed with the electrical weapon is resulting in serious injuries and deaths.
With the virus now a global health emergency, we must take steps to fight misinformation and demand a swift UK-wide vaccine roll out, writes Phil Samba.