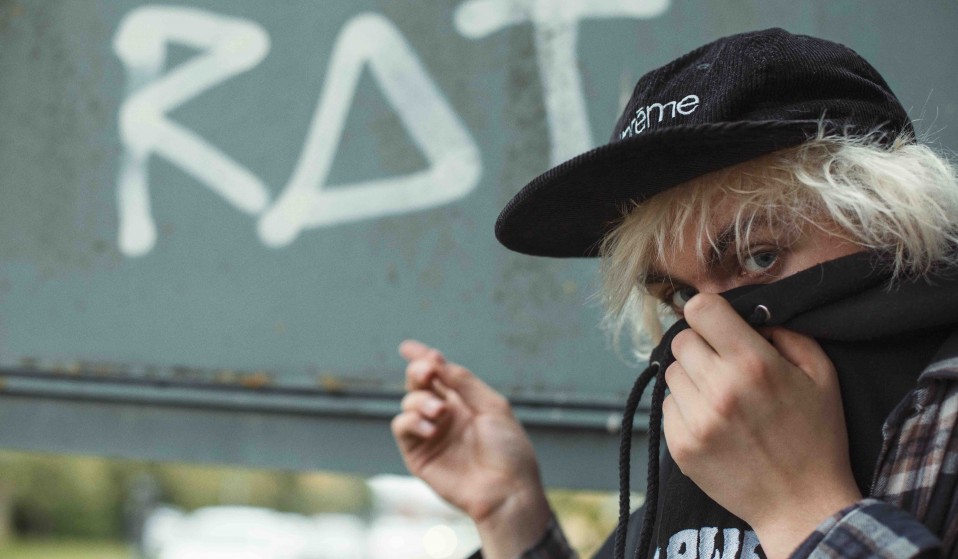 Jordan Cardy is the Essex teen shaking things up with DIY videos and mixtapes as Rat Boy. Huck hung out at his Chelmsford stomping ground to find out what’s next for the small-town tearaway.

Jordan Cardy is the Essex teen shaking things up with DIY videos and mixtapes as Rat Boy. Huck hung out at his Chelmsford stomping ground to find out what’s next for the small-town tearaway.

Rat Boy is standing on top of an old concrete pill box in the middle of a field. Photo shoots are still a new thing for the Essex teen whose bedroom mixtapes catapulted him into the limelight, and he handles it much like you imagine any nineteen-year-old would: after obligingly scrambling up the decaying concrete, he paces around, looks a bit awkward then finds his stride with some mock-lairy posturing.

Rat Boy is the name kids at school gave Jordan Cardy “for looking like a rat”. It’s easy to imagine him as the scruff with the bleached mop, daydreaming at the back of the class. But if teachers and other students had paid him any attention, they’d have realised there was more going on in his head than all of them put together. Bursting with creative energy and now free of school, his infectious lo-fi hip hop rock has quickly earned him the “voice of disaffected youth” label – there’s a burning social critique under all the jokes about cheap thrills and naff sportswear. Rounding out a ton of best of the year lists, he’s won comparisons with Jamie T and Alex Turner of the Arctic Monkeys, but Rat Boy does everything himself: from his attention-grabbing art to social media antics, bedroom productions and homemade videos, he’s truly DIY. And the guys who called him names at school? Defying everyone’s expectations, it’s their girlfriends going wild in the front row at his shows. 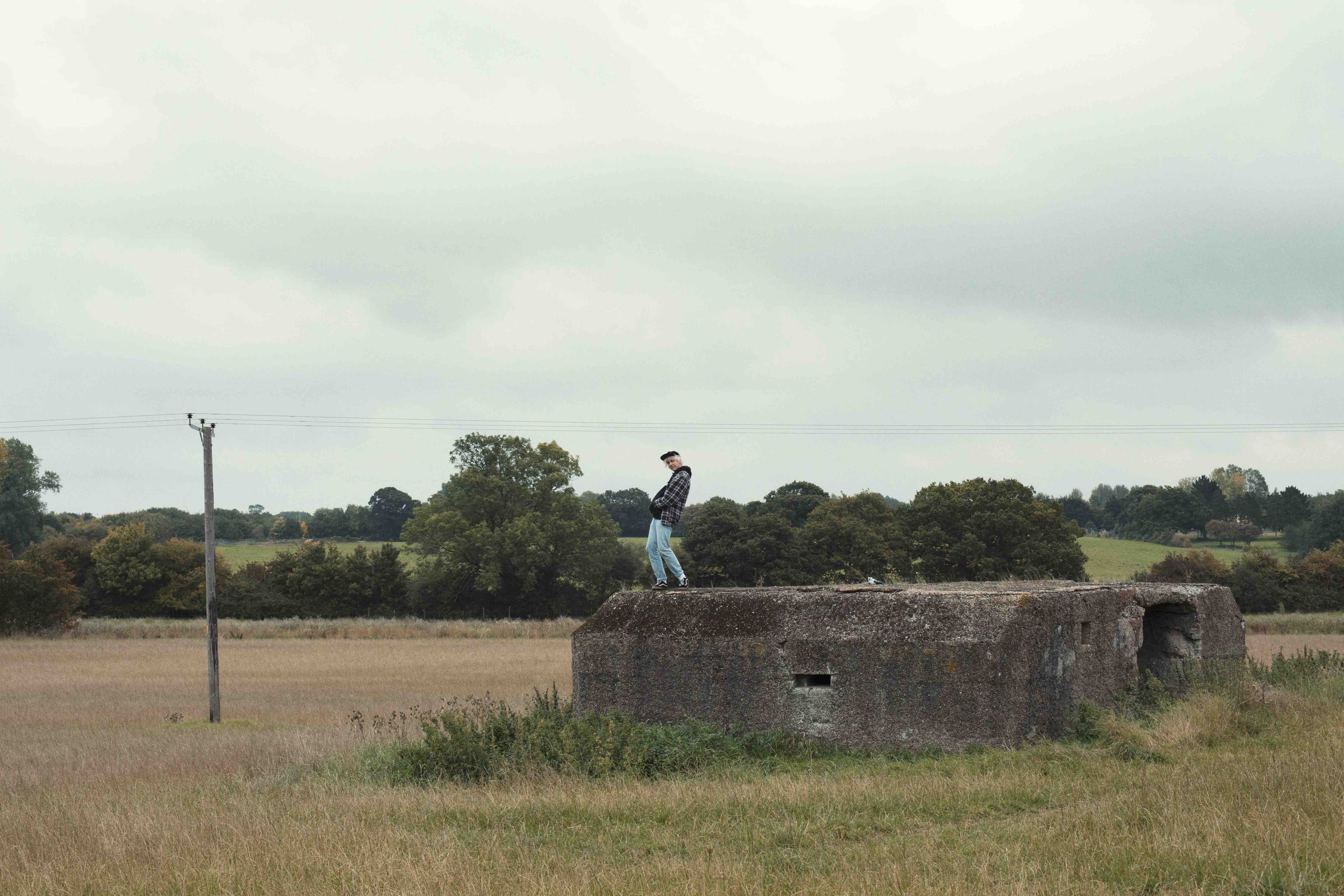 After Jordan slides down from the bunker, we continue walking through the fields around his house on the outskirts of Chelmsford, looking for something that isn’t, well, a field… Jordan has a suggestion: “There’s a road sign round the corner I spray painted ‘Rat Boy’ on?” Essex has a bad rep for all the tired clichés about Broken Britain, lager louts and so on. But what’s it like growing up around here? “Where my mates live just round the corner no police come so you can pretty much do anything really,” he explains. Rat Boy embraces the image of a downtrodden tearaway and his lawless haunt is where he shot the video for ‘Sign On’: driving a Burberry-patterned Metro around while local kids wheelie past on their bikes.

As a peroxide blonde skate rat he was always going to stand out from the crowd of tracksuits and tacky jewellery. “Nobody skates in Essex, it’s all scooters: it’s well annoying,” he explains. “Before I was making music, I used to watch loads of skate videos. [Mark Gonzales’] ones really stood out. It wasn’t about how many tricks you could do, he would just make weird like creative stuff. He’d be painting or riding a unicycle and throwing skateboards on the ground. He doesn’t have any boundaries or rules, so I hope that comes across [in what I do].”

But it took hard graft to translate having fun and getting up to no good into art that’s making people take notice. “I’ve always tried taking music seriously, but not knowing how to,” he explains. “Like, I’d be the only one who turns up to rehearsal or trying to the get the band together. That’s why I started doing it on my own: giving up on relying on other people, sort of thing.” 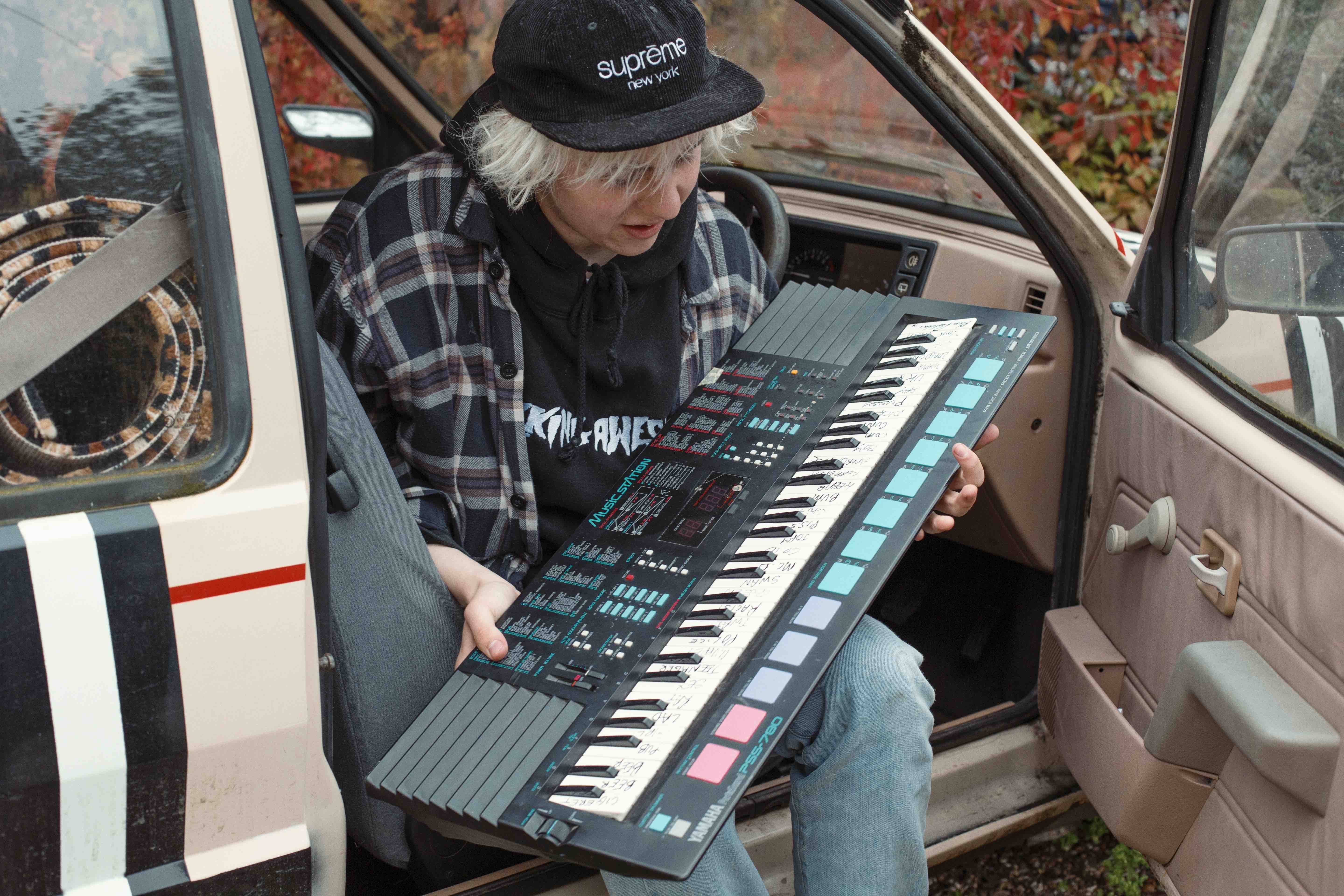 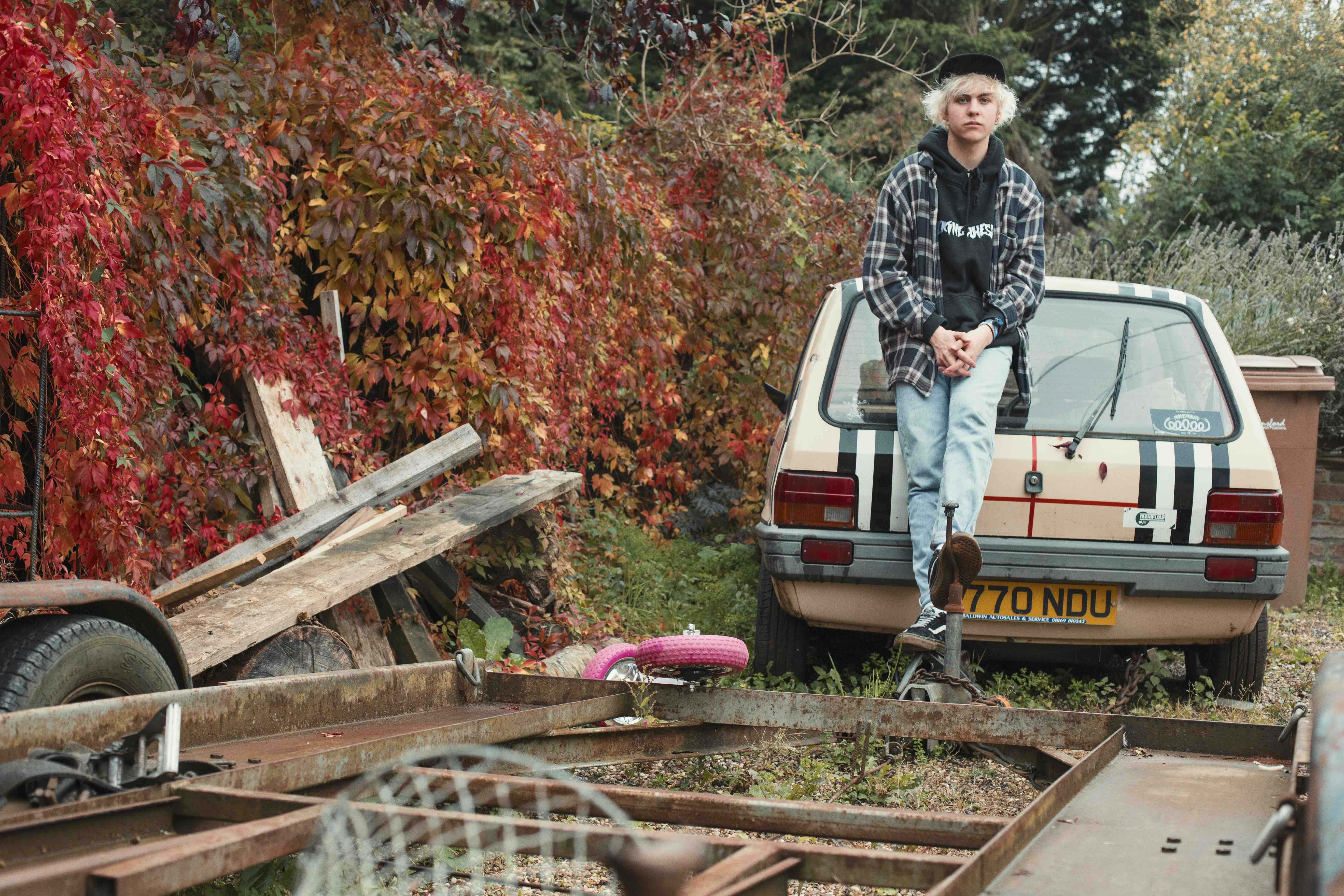 After finishing college, a dull kitchen job at the Chelmsford Wetherspoons convinced him to go all in. “[It taught me] I needed to take my art seriously and just go for it.” For anyone outside the UK, Wetherspoons is a pub chain which applies the same sterile, plastic formula to pubs in every town centre. It’s almost a teenage right of minimum wage passage: dealing with clientele attracted by low-price alcohol and generous opening hours – and often seeing things that can never be unseen. “On disco night I had to do kitchen close on my own,” Jordan explains. “People used to burst in the kitchen really pissed. Idiots with their quiffs and the big steroid cunts.”

It wasn’t where he wanted to be, but Jordan turned boredom and nothingness into something creative – as he always does. “I used to ride home on a Friday night and the amount of people that shout at you when you’re riding… I used to sample them loads,” he explains. “At the end of ‘Sportswear’, there’s a bloke saying how much money he’s got in his pocket, come take it. But I knew he was going to beat the crap out of him if I went near him.” Inevitably, it didn’t take long before he got fired. 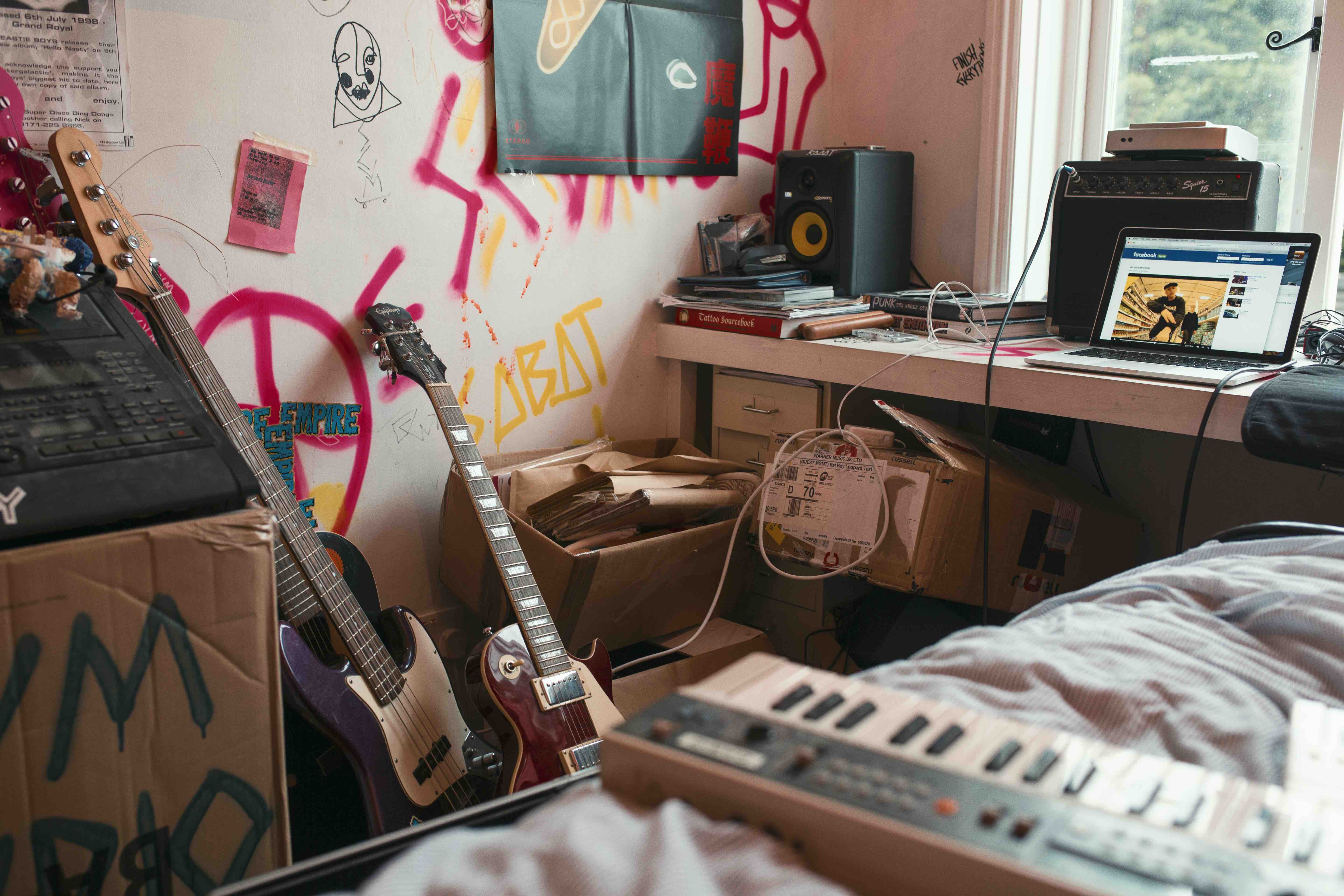 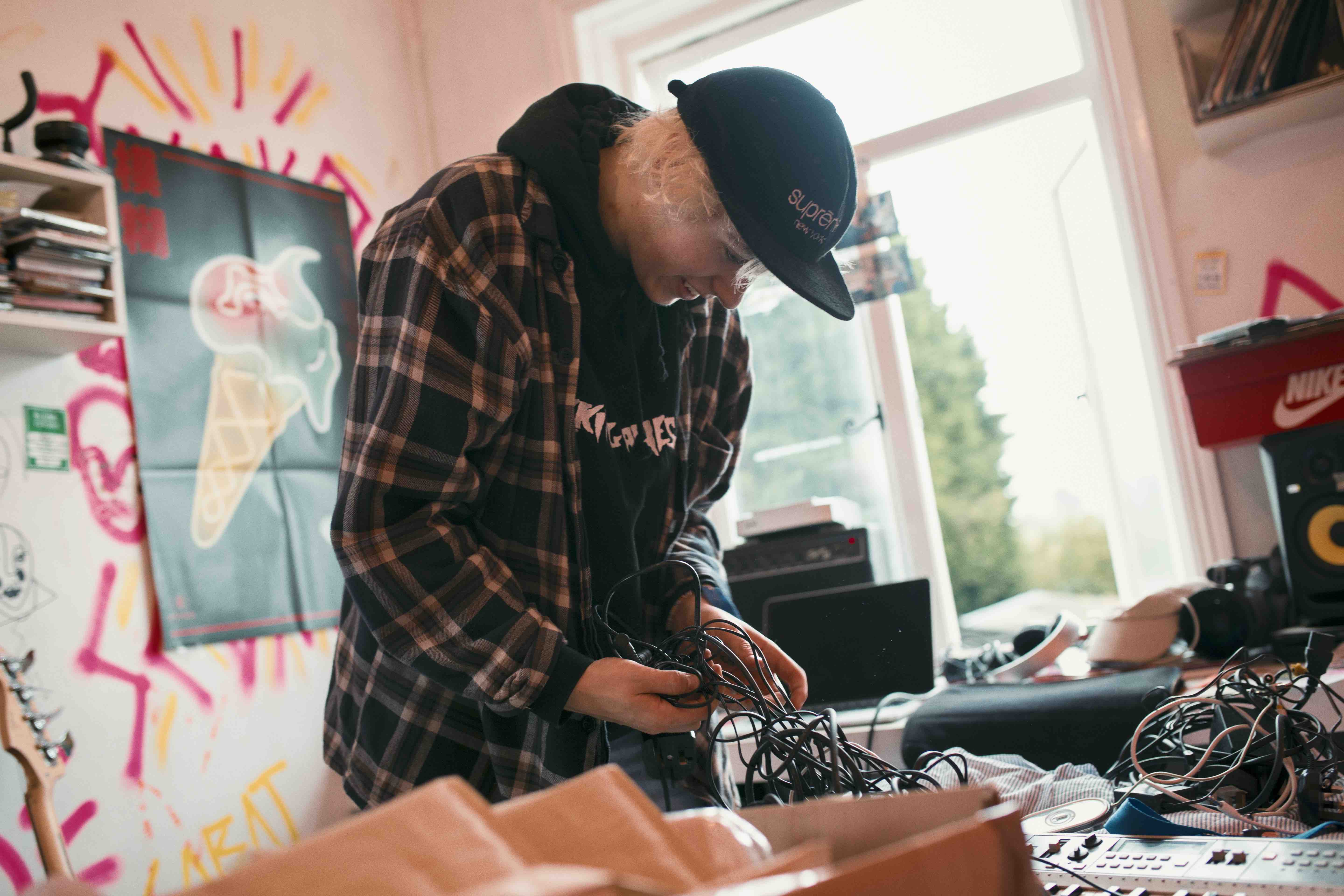 Rat Boy’s bedroom walls are covered with bright orange graffiti and it’s strewn with bits of music equipment, keyboards, camcorders, cables and a Tascam tape sampler: “Wu-Tang mastered an album on it to make it sound phat.” He’s just dropped his video for ‘Wasteman’ which he shot and edited with a bandmate before uploading it straight to Facebook. “Were the label alright with it?” he asks the PR. “We’ll find out,” she replies. As he pumps it out at full volume, his mum shrieks up the stairs: “Jordan is that you?” “Yeah, making beats,” he shoots back sheepishly.

With a string of festival dates and an LP in the works – if he can resist throwing it all up on Soundcloud before the label get a look in – 2016 looks like Rat Boy’s year. His mum may still call the shots at home, but when it comes to his music, Rat Boy is dictating terms. “Yeah, he’s a bit of a nightmare,” the PR admits. “But… in like a good way. The label have all these ideas and Jordan’s like, ‘Naaaah, I’m not doing it that way. I’m doing it my way, fuck off.’”

Linkedin
RELATED ARTICLES
OTHER ARTICLES
Tough fines and arrests for drug possession and supply is pushing festival-goers towards unsafe measures to consume or smuggle in their substances.
To mark the premiere of his new documentary on surfing giant Gerry Lopez, the filmmaker and former pro skateboarder sits down to share his unique brand of wisdom.
A new series of photos by Johny Pitts shines a light on communities and subcultures that have all too often been overlooked.
Susan Pektaş’s new photo series delves into multiple cultural layers of the region with a touch of personal mysticism.
From the early originators to the female writers at the forefront of today’s scene, we talk to the artists redefining graffiti’s consciously macho origins.
Photographer Bud Glick recounts documenting everyday life in the area, and what it taught him about the Chinese immigrant experience.