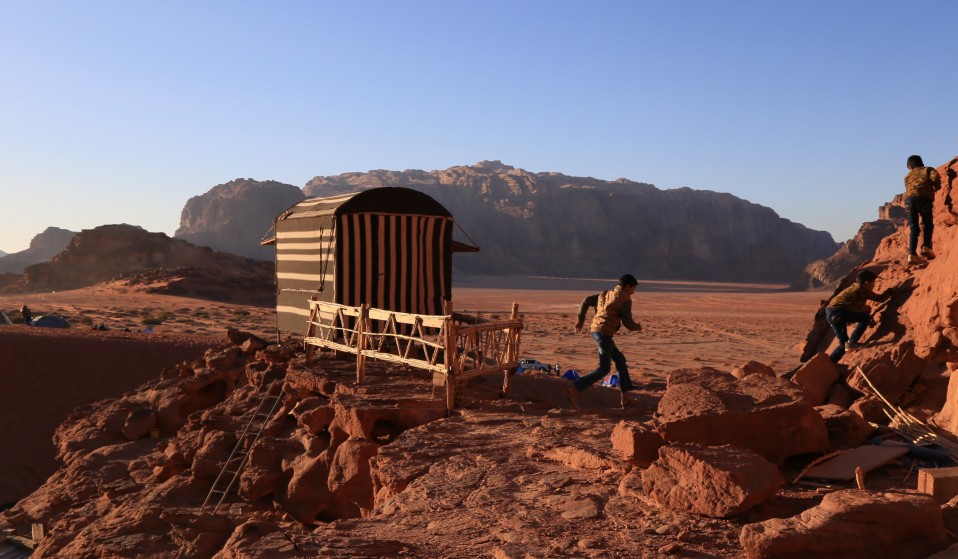 In March this year, 200 techno lovers from Jordan and abroad descended on the mystic Wadi Rum desert for WRE: a unique festival experience combining local tradition with modern dance music.

In March this year, 200 techno lovers from Jordan and abroad descended on the mystic Wadi Rum desert for WRE: a unique festival experience combining local tradition with modern dance music.

Only a few minutes into his set, Shadi Khries suddenly has to fade out his track. The Jordanian DJ and organiser of the first Wadi Rum Electro Festival (WRE) is in distress over flashing blue and red lights that just appeared on the other side of the desert valley. “We have the official authorisation to organise this festival, but I knew there would be trouble,” Shadi says, as his eyes fixate on the lights approaching in the dark.

15 minutes later, a police car pulls up with wailing sirens at the festival site, a Bedouin camp inside Jordan’s Wadi Rum desert. 50 Bedouin men then rush to the police car to show the officers who is in charge. All of them grab each other by the hand and start chanting and dancing the “dahiya” – a traditional Bedouin dance – until the sirens disappear again in the depths of the valley. Then the turntables are turned back on and both the Bedouins and the festival crowd revive the dance floor.

Jordan, a conservative country that borders war-torn Syria, is not your typical festival destination. Nevertheless, 200 techno lovers from around the world flocked to the Wadi Rum desert, a UNESCO protected area, on the last weekend of March to set up tent amidst the mystic red sandstone mountains. 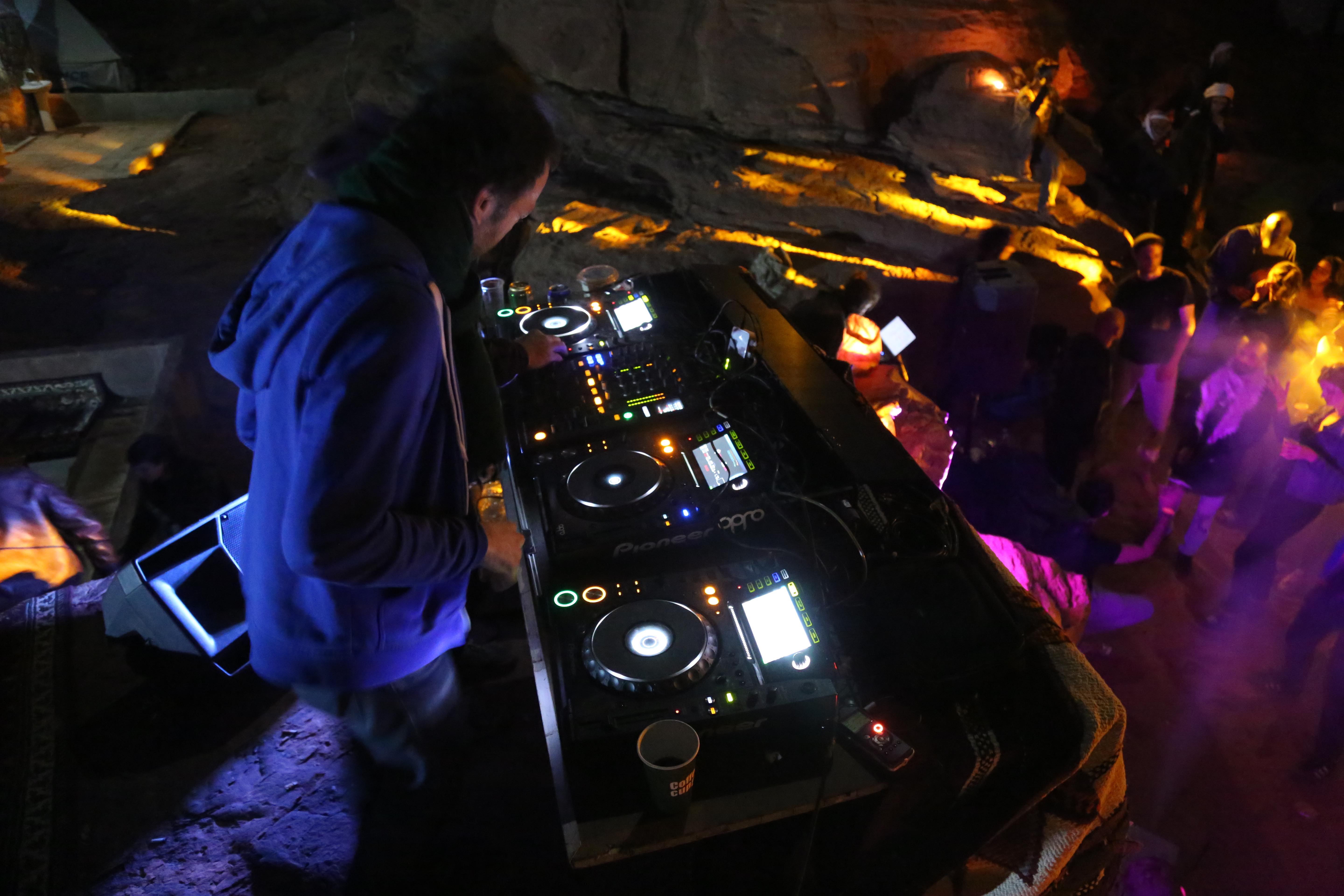 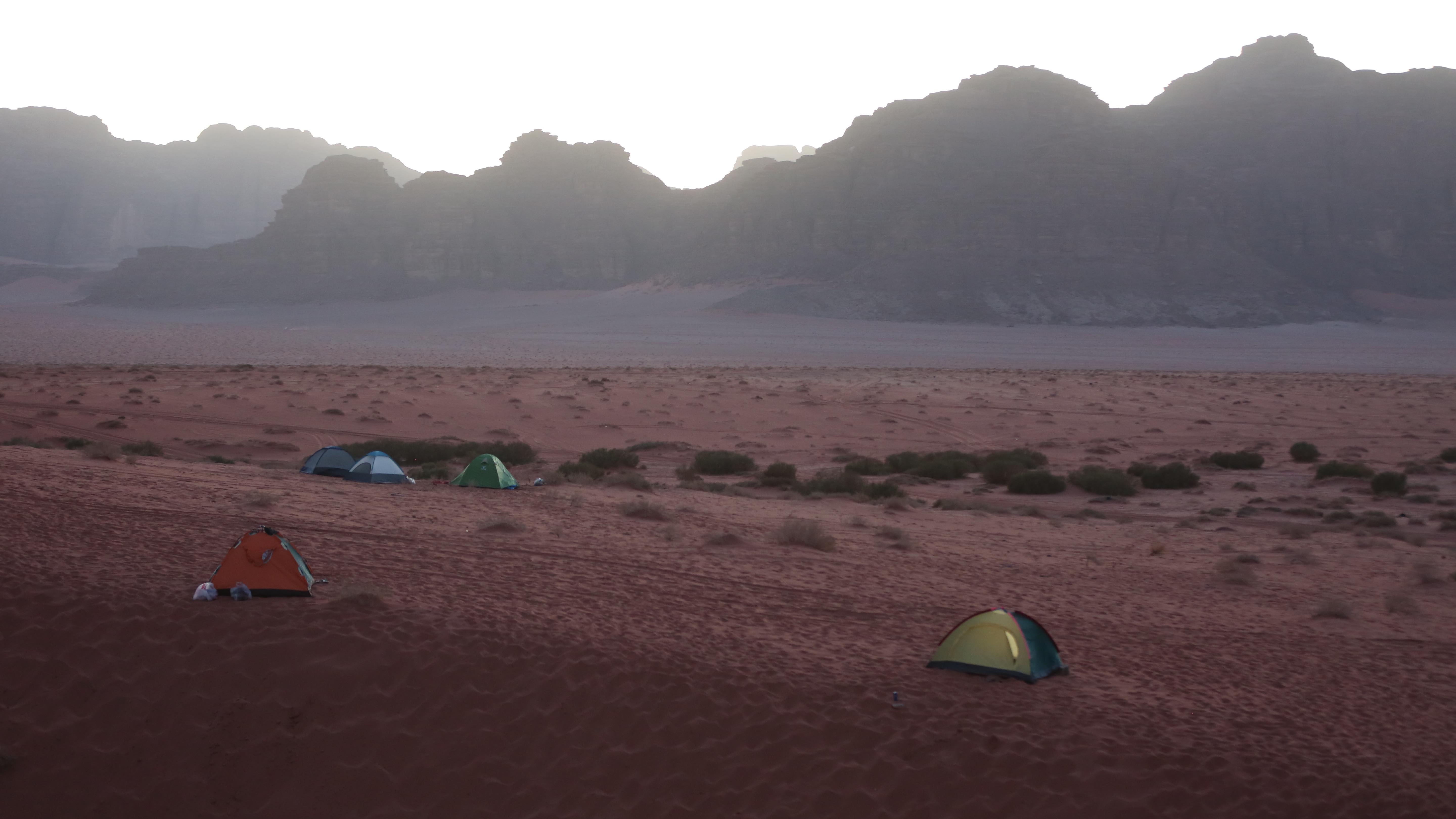 By turning Wadi Rum’s stunning scenery into a stage, DJ and percussionist Shadi Khries was able to convince all of his major collaborators – which includes the Parisian duo Acid Arab, the German techno collective Station Endlos and Cornelius Doctor & Tushen Raï, a duo from Lyon – to join this untypical adventure. After all, they all share a deep appreciation for Middle Eastern music and a curiosity for fusing it with techno beats in ways beyond simply walloping samples over a beat.

“It’s an incredible experience to see Bedouins in their traditional gowns lose it to our remix of a track that we discovered a few years ago in Jordan,” says Acid Arab’s Guido Minisky and Hervé Carvalho. “This encourages us to play songs the audience may know in part, while still making people discover something new.”

Local young Jordanian Fayez al Hwety, for example, tells Huck that the festival is his first exposure to techno music – but he intends to dance to it all night. “Bedouin-style”, he adds with a smile. 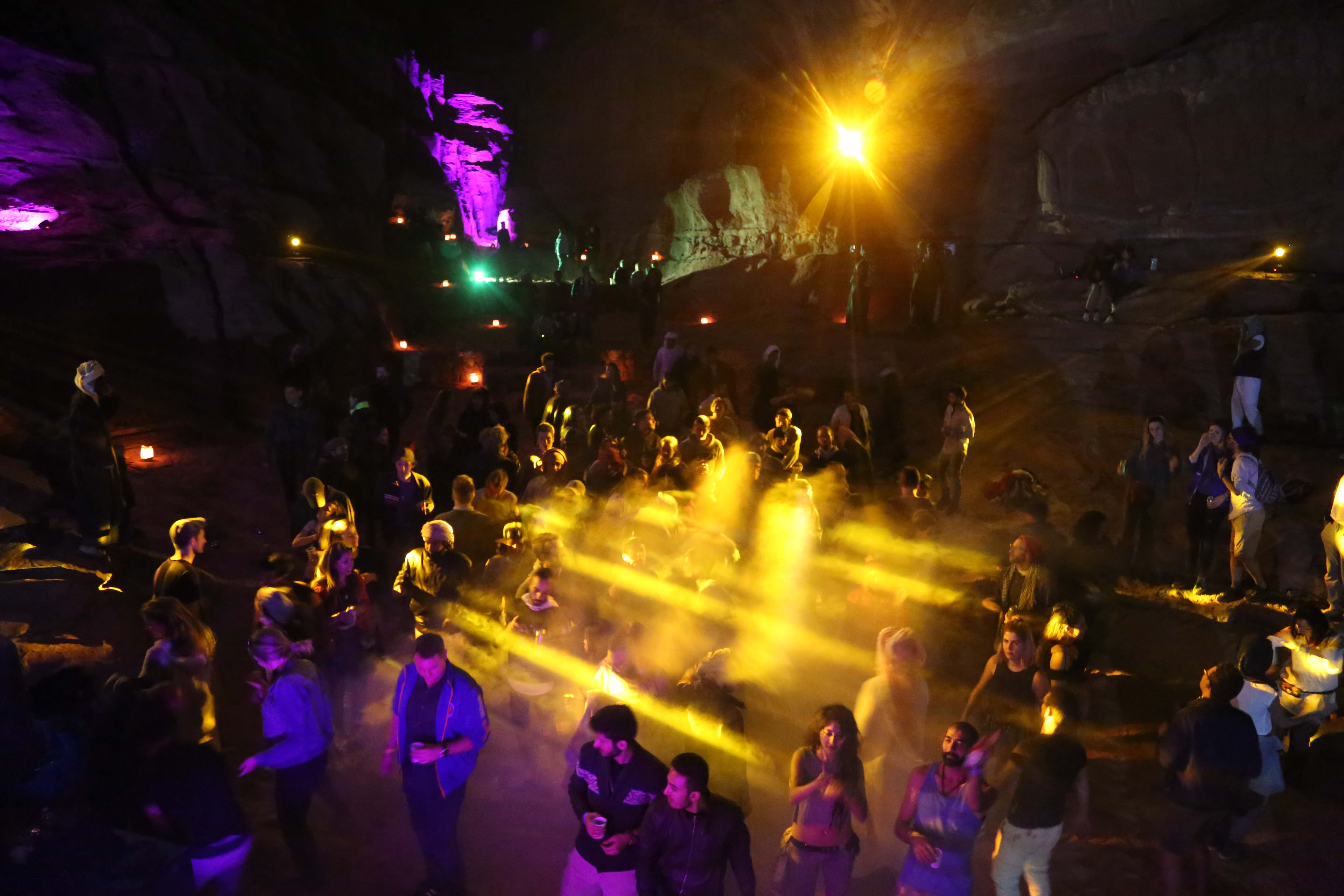 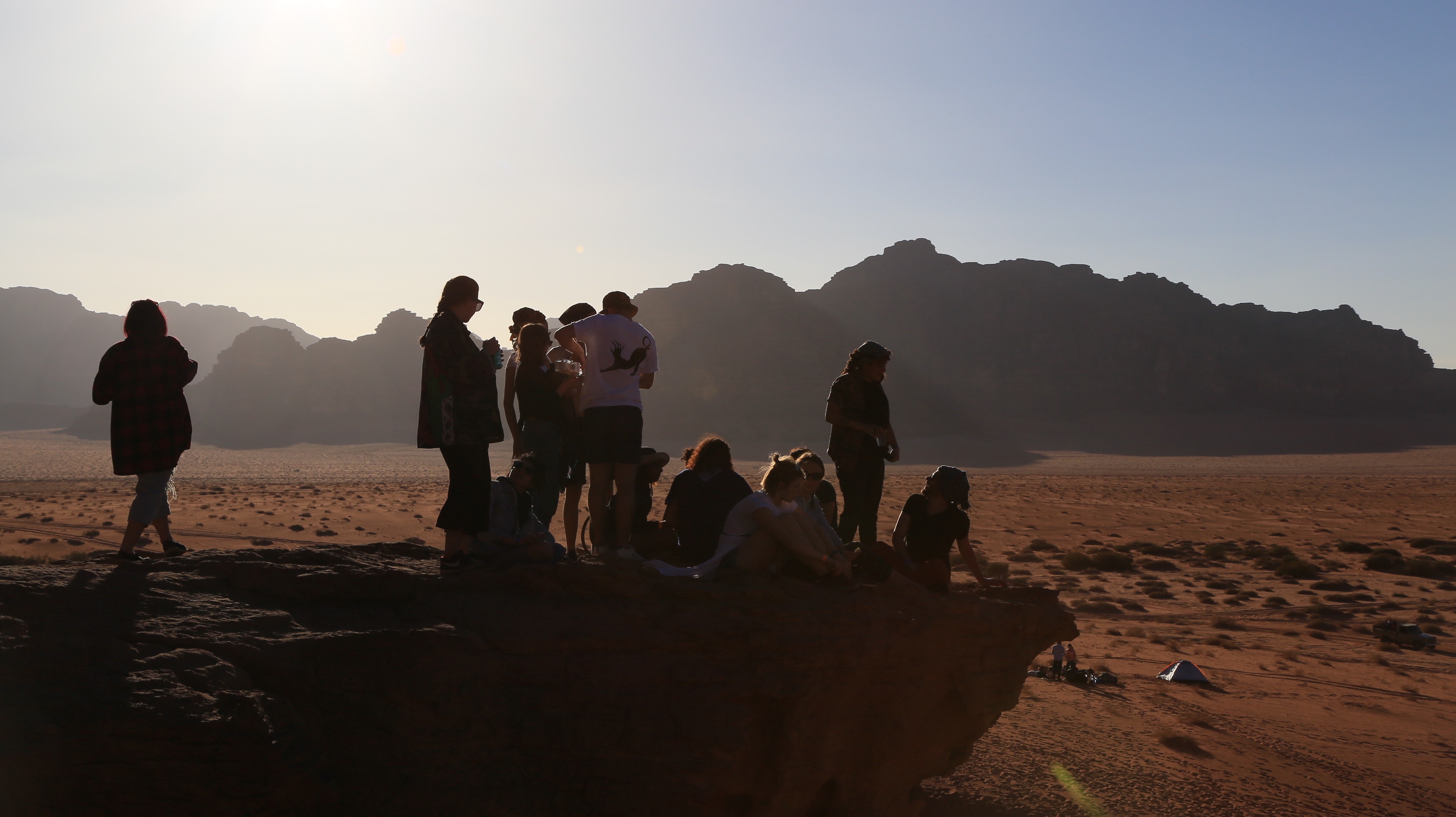 For many artists and attendees from abroad, the informal lineup also adds much to the two-day festival’s allure. Bedouins in Wadi Rum, who are all part of the Zalabia tribe, are known for their mastery of centuries-old Arabic instruments, such as the Oud, Rebaba and Darbukka. However, the only occasions to witness Bedouins perform their music traditions are usually Bedouin weddings.

Shadi’s friendship with the Bedouin community of Wadi Rum goes back 15 years, to when Shadi started going to the desert to discover, record and sample their music traditions. For Shadi, now an established DJ in Paris’ nightlife scene in part thanks to those unique samples of traditional Bedouin music, the festival is a way to give back to the Bedouin community. Because of their intimate friendship, a number of Bedouins agreed to take the stage to perform their music tradition, although no one is getting married.

Bedouins in Wadi Rum are used to foreigners. One might say they have become experts in hosting tourists and showing them the desert through climbing, Jeep and camel tours. However, WRE festival is a welcome change from the norm – allowing Bedouins to share their unique, centuries-old music traditions and mingle with electronic music lovers from abroad.  “It’s about sharing cultures both ways”, adds Shadi. 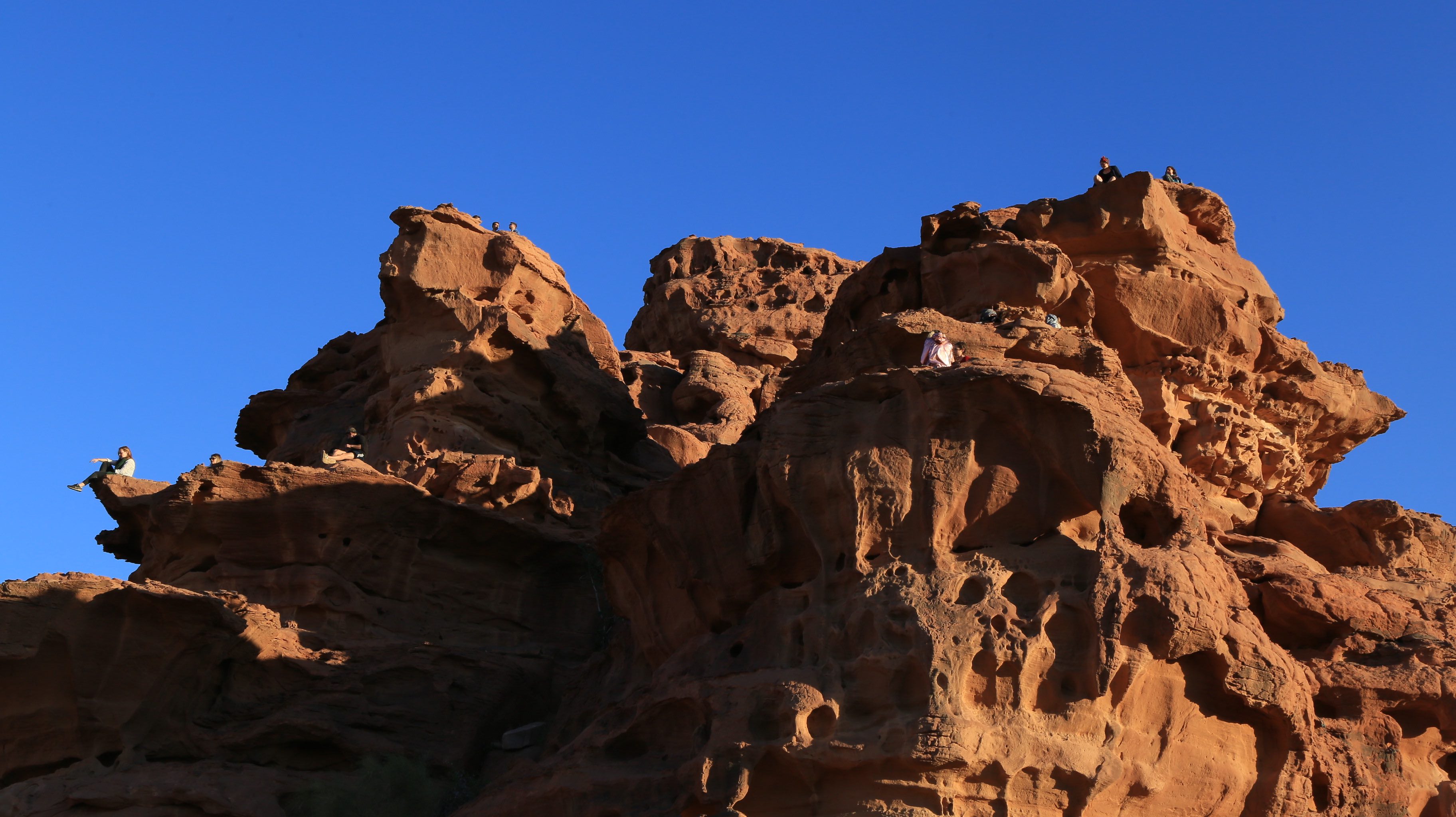 Linkedin
RELATED ARTICLES
OTHER ARTICLES
Photographer David Hoffman recalls documenting the extreme wealth inequality around Tower Hamlets and Hackney int the 1980s.
LGBTQ+ students are keeping the spirit of the original Pride alive by fighting for liberation for everyone, not just their community.
The author discusses the all-consuming nature of heartbreak, and turning the experience into an incisive exploration of love and loss.
Freddie Miller’s new series of photographs investigates who today’s trainspotters are and what drives their unfettered enthusiasm.
Proposals to introduce a minimum GCSE threshold for student loans will disproportionately affect those from marginalised backgrounds.
Photographer Arthur Grace recalls travelling through the Soviet Bloc and finding ways to evade the surveillance of his work.