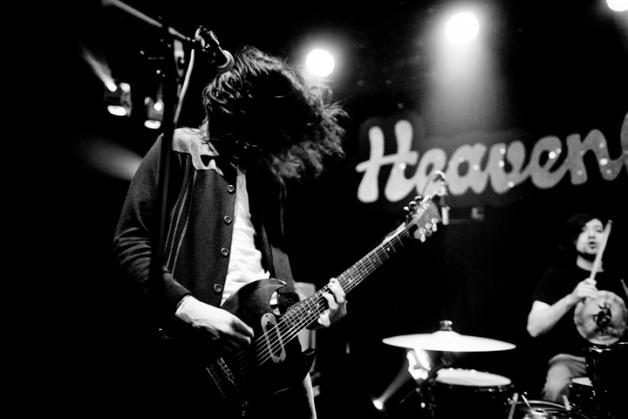 Heavenly Recordings, home of legendary 90s bands such as Manic Street Preachers, Saint Etienne and Flowered Up, and pioneers of the recent psych revival, celebrates its 25th anniversary this year. Huck spoke to founder Jeff Barrett about the label’s ethos, where it came from, and what’s next for Music Week’s Independent Record Company 2015.

First off, how did the label get its name? “Oh god, I didn’t really ponder it for very long. I just remember being there, flat on my back in the small living room in the basement flat that me and my wife had in Shepherd’s Bush, high as a kite, listening to music, and that word came to mind. So I guess it was how I was feeling, I guess it’s how I like music to make me feel, it’s how I like music that I’m involved with to make people feel.

“I’d just been asked if I would partner up with Mike Chadwick to do a record label and he wanted me to name it. He was the boss of a big independent record distributor at the time, and he was incredibly supportive of me and my ideas up to and including this offer.

“Maybe that was a feeling that was exaggerated or accentuated by being high, but I think it’s almost pop terminology – my love of pop music really starts in the late 50s with doo-wap, in the early 60s with girl groups and songs from the Brill Building, and I think if you go back to several of those songs you’ll find that word, heavenly, in the lyrics. You also find it in Blue Monday by New Order, Shout To The Top by The Style Council, I Love How You Love Me by The Paris Sisters – they’re three of my favourite records and that word is there.

“Subliminally, that was probably what was going through my drug-addled mind as I lay on the floor of that flat in Shepherd’s Bush, trying to come up with a name for a record label – it didn’t seem to take me very long.”

As far as the most significant bands go, Jeff says he wouldn’t want to have a favourite child: “The bands at the beginning were very significant, because they were the beginning, they were the impetus. They were the original energy to do something, and of course back then, with it being so new, it was a million times more intense and creative and actually the general time was, in 1990 – it was a fantastic time. But just because they came first shouldn’t really give them any more significance than the ones that came later, I don’t think.

“It’s one continuum, what we do. You mark things off – this year we’re marking our 25th anniversary and this will be a special year for us.”
The label partnered with EMI from 2000 to 2009, a deal which was purely to keep the label alive without any other forms of funding. “When we first tucked up with a major, it was completely and totally by accident,” Jeff said. “We went into a deal with Sony, which only lasted two years, but that was our only way of funding. I’m not a businessman – the smartest business moves I make are having people around me who are, which is how we’ve really managed to survive. We’ve been independent now for the last six or seven years and I look back and think “fuck, I wish we’d been doing this all along,” but we wouldn’t have lasted.”

To celebrate the label’s 25th anniversary this year, Heavenly are curating the Garden Stage at End of The Road Festival on the Saturday. They will also be launching a book launched at the festival, released on First Third, and designed by Paul Kelly, who makes Heavenly Films, along with a Heavenly 25 compilation. The label has also released seven split 7” singles for Record Store Day, which can be bought individually or as a numbered, limited-edition boxset with an insert and a sticker.

Jeff’s proudest achievement is that something that he started 25 years ago has become something that continues to develop “as a way of life due to the respect and loyalty of people as honest, genuine, talented and brilliant as Danny Mitchell, Carl Gosling and Andrew Walsh. So, with hindsight, I think my proudest moment is the fact that I started a record label in the first place, a pretty amazing thing to do considering, and that it’s allowed me a life outside of straight society where it’s all about the music, the thing that I love.”

Jeff’s biggest life lesson? “Don’t be a cunt and don’t work with cunts.”

Finally – do you still believe in magic? “Of course.”

Linkedin
RELATED ARTICLES
OTHER ARTICLES
An enduring inspiration?
Sean Bohrman of Burger Records celebrates the tape in the run up to Cassette Store Day this Saturday, September 27.
Cassette labels across the UK and the US celebrate the analogue format September 27 with new releases, rare reissues, special gigs and all-out tape-themed geekery.