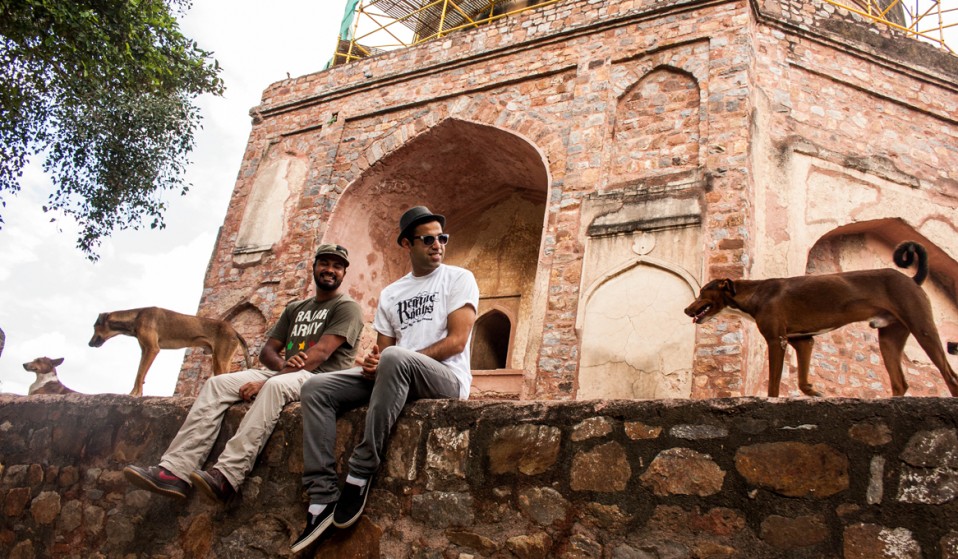 Jamaica’s greatest export is being tailored to India’s ears, thanks to a party-starting deejay crew who preach the reggae gospel.

Jamaica’s greatest export is being tailored to India’s ears, thanks to a party-starting deejay crew who preach the reggae gospel.

Mr Herbalist and Diggy Dang drag their chilled-out demeanours past an ancient stretch of red sandstone arches dating back to the Mughal Period. We’ve snuck around the back of famous New Delhi monument Humayun’s Tomb to find sanctuary in a city overpopulated with families and lovebirds enjoying a sanctioned day off on Gandhi’s birthday. Aside from a guard bribed with promises of “Just one minute”, no one knows we’re here – a rare change of pace for music promoters Reggae Rajahs.

Though they attended the same international school, Raghav Dang (aka Diggy Dang) first met Zorawar Shukla (aka Mr Herbalist) when he was hanging above the Rajasthani desert from a zip wire, set up by the adventure sports company where Zorawar worked. They started hanging out, less literally. Third member, Mohammed Abood (aka DJ MoCity), was a hip hop promoter at the time. He threw a party on Bob Marley’s birthday in 2009 and invited an Australian reggae collective to play. Raghav and Zorawar attended.

“When I witnessed that party I was like, ‘Okay, this is going to change everything,’” says Diggy. “There was absolutely no reggae music here – no promoting it, no parties, no one had heard of reggae beyond Bob Marley.” The trio set up as an entertainment rather than music collective with the aim of spreading the reggae word, with one person spinning records and two people on the mics, hyping up the crowd.

Since that night, the reggae triumvirate has gone from holding a few low-key events in their hometown of New Delhi to invading venues in big cities like Mumbai. They’ve become a mainstay act at mainstream festivals, collaborating with local artists like BASSFoundation and Ska Vengers and hosting established international acts such as Graeme Hamilton (of UB40 fame), Mr. Williamz, Apache Indian, Soom T, Mungo’s Hi Fi (Scotland), Blessed Love (Germany) Subatomic Sound (USA) and Heartical Sound (France). They’ve also taken the high-powered spirit of their own sound system culture outside the subcontinent, playing one-of-a-kind track cuts known as dubplates in Peru, Panama, NYC and beyond.

“We play other people’s tunes, but we also play [dubplate] specials,” explains Diggy. “We interact with the crowd so they can relate to the music. Some people can be alienated by reggae because they don’t really understand the patois, the accent, they don’t really understand what they’re talking about. With specials we adapt a tune for the Indian massive. We customise it, talking about corruption, about society, about respecting Indian women.”

The guards kick us out mid-interview. As we hustle away, we enter a scene that mirrors the social complexity of Indian society. A train ruptures the serenity of the ruins carrying the upper classes cross country as a community of ‘untouchables’ living in squalor look on. They wave and smile to the boys, living a world apart though in touching distance.

Where Bob Marley once preached “One love” in a Jamaican context, the trio work to spread the reggae gospel on home soil. In 2010, Reggae Rajahs’ DJ MoCity paid credence to this legacy when he told India’s Rolling Stone: “If you’re playing reggae music, you’ve got to educate people about what’s going on in the world. Don’t overlook what’s going on around you. Try to stop corruption, make peace.” Iraqi-born, he shared how reggae shaped his perspective on the invasion: “I try to spread knowledge about peace and the war, and remind people that we should stop and play music, drop beats, not bombs.”

With Bollywood music taking up over seventy per cent of the market, Reggae Rajahs are awakening a pop-sick alternative crowd. The nation wasn’t always hypnotised by song-and-dance routines; before Bollywood blew up, Indian ears were more attuned to the bitter-sweet classical genres of Hindustani and Carnatic, which boast chant-like ragas and droning melodies that border on meditational. It’s no surprise then, that reggae’s steady laid-back tempo resonates with a disillusioned youth in a country where the very idea of subculture is still in its formative years.

“Today, you can be a musician and make money, maybe not make pots of it but you can live,” says Mr Herbalist. “You could never do that before because there was no music. There was Bollywood, but now there’s all types of things happening.”

Modifying tastes is just one ambition; breaking stereotypes is another. “It’s slow music, so people are like, ‘Reggae is just too chilled, we can’t go to a club and listen to reggae, man.’ They don’t have the perception that reggae can actually be dance music. It’s music that carries a message all the time.” He believes the industry needs more live venues, more reggae deejays, more bands and more people buying tickets for shows. “It needs to be a scene, it can’t just be us.”

And a scene seems to be forming. As well as hosting the Dub Station stage – the first festival stage to play reggae, drum ‘n’ bass, jungle and hip hop – at Bacardi’s touring NH7 Weekender (with stops in Delhi, Bangalore, Pune and Kolkata) they now have a weekly show called Simmer Down on India’s first alternative underground station, Radio 79. But the biggest endorsement of all has to be opening for Snoop Dogg in New Delhi – “The energy was crazy, it was electric,” says Mr Herbalist – with Snoop coming off stage to embrace them with a little message (“Yabadaba, guess what? We love India!”).

But Mr Herbalist is adamant that India’s subcultural heyday has yet to come. “Yes, we’re pioneering reggae music, but what we’re really enjoying is actually being part of this music scene that’s exploding,” he adds. “It’s small right now, we know everyone in the music industry, but in twenty to twenty-five years we’ll look back on this and be like, ‘Damn, that’s the period where music really started happening in India.’”

This article originally appeared in Huck 42 – The Mark Improv Issue. Buy it in the Huck Shop now or subscribe to make sure you never miss another issue.

Linkedin
RELATED ARTICLES
OTHER ARTICLES
Joost Vandebrug's intimate photo project captures the cobbled-together community of the lost boys of Bucharest.
Iconic music photographer Michael Putland reflects on one of his favourite photos from his archives featuring Bob Marley, Mick Jagger and Peter Tosh.
Tipi Valley has thrived as a community for over three decades with no rules and no councils, blazing a path for alternative living – hardcore style.