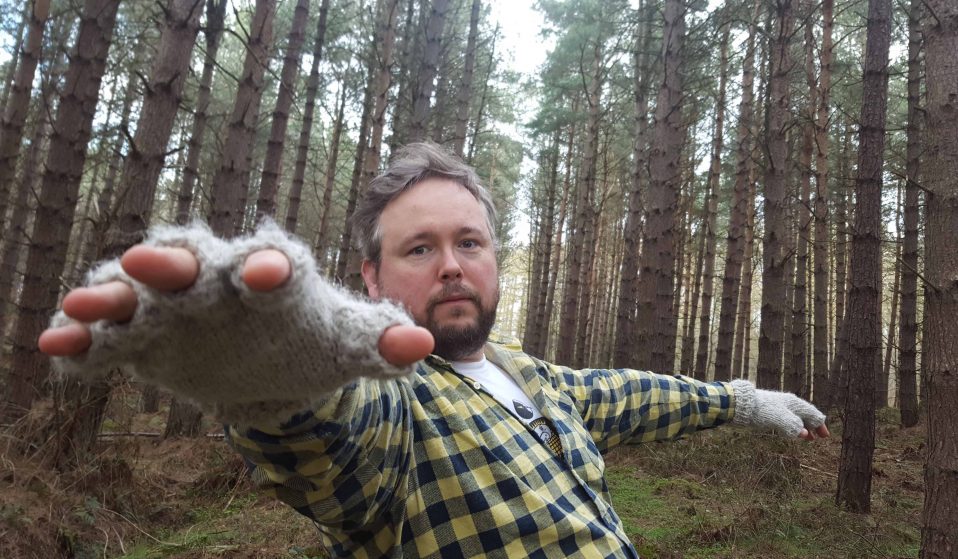 With his new record 2020, the critically-acclaimed songwriter is looking to the (close) future; a world of dead-end jobs, bigoted butchers and retractable extension leads.

With his new record 2020, the critically-acclaimed songwriter is looking to the (close) future; a world of dead-end jobs, bigoted butchers and retractable extension leads.

“Excuse me, I’ve just got to disentangle myself from the cat,” says Richard Dawson on the phone from his home in Newcastle. He adds a hearty “she’s gorgeous!” when he finally manages to free himself from his pet, and then proceeds to apologise profusely, something he’ll do five or six times during our interview: “I’m really sorry, I’m absolutely waffling at you, I’m so tired.”

He needn’t worry. One assumes a bad Richard Dawson interview (not that this is one of those) would be more life-affirming and honest than a thousand PR-ed stars on press junkets trained to reveal nothing about themselves. As you might have guessed, there’s nothing starry about Dawson, a singer who has been lavished with critical acclaim like few others these past five years or so, but retains his sense of humility and certainly his sense of humour.

Dawson has remained in Newcastle, and his latest record 2020 reflects a strong sense of community. The songs are written about individuals who may be living or fictitious, though the wit and empathy that emanates from the album suggests more of the former. If 2017’s Peasant was set in the Dark Ages and needed researching, 2020 is set only slightly in the future making the source material more readily available: the anxiety, the zero-hour contracts in shitty dead-end jobs, the fat-headed butcher blaming flooding on benefit scrounging immigrants, the backdrop of Wetherspoons, Cash Converters and Nandos, and the consumptive need for more “trainers and tarot cards, Dash-Cams and wall-art, Lego and shaving foam, onesies and retractable extension leads” all feel grimly, and sometimes comedically, familiar.

You mention Wetherspoons and Cash Converters in your songs. Hearing them tends to give the listener a jolt, or it might even provoke a laugh. Isn’t that odd given these places are part of our experience in Britain?
Yeah, it’s really funny – when I play the songs live, I know which bits will get a giggle, like Cash Converters. I get it, but the aim was never to be funny. Often the funniest sounding lines are the very saddest ones as well. In “Heart Emoji” there’s a person giving another person a bollocking for pouring a pint of Guinness wrong. It’s actually really horrendous in the context of where their relationship goes. This is even before they’ve begun a relationship – it’s at the very start and already there’s a kind of low-level abuse there over something as arbitrary as a pint of Guinness. I’ve seen this happen as well. So the saddest things tend to be the most ridiculous-sounding things as well.

The fat-headed butcher raises a belly laugh, but as you get deeper into this record, a sadness starts to reveal itself. Also isn’t there something profoundly depressing about places like Wetherspoons anyway?
I mean I had some great times in Wetherspoons but not for a long time. I guess it’s that post-work feeling. It’s quite exciting when you start a job and you enter the world of post-work drinking, but it quickly becomes pretty bad. Wetherspoons is also more than the setting for a character to have a pint in, you might also consider what kind of a business that is, and also that those pubs have generally taken over these grand old spaces. There’s a lot to unpick there, hopefully.

In the song “Jogging” there’s a feeling that society is coming apart at the seams. Do you sense there’s more division in the last few years?
Yeah, I’ve felt the change but I can’t be sure whether it’s something that’s happened out in the world or whether it’s me getting past my mid-30s. That felt true for the character in the song. She… [Richard stops himself, and laughs, having revealed that the song is written from a female perspective]. She or he, I should say. I tripped myself up a little but there and gave a bit too much away…

I can write it as a he, if that helps?
No no, it’s not a he, in my mind it’s a she… I wrote it as a woman but I take quite a lot of care in most instances that people aren’t gendered in the songs. It’s actually interesting – I’ve been reading the reviews of this record and they’ve all imposed genders onto the characters as you’d expect, so it’s always a lad playing football for instance. I can understand because it’s a man singing the song, but I’ve been really careful not to not do it. I don’t want to fix that stuff in people’s minds.

Is 2020 an indictment of the political classes without calling them out directly? The palpable suffering – from Kurdish families getting bricks through their windows to jobs that challenge a person’s mental health – makes it feel like a political record.
You know, that’s for you to write. For me, it’s not a political record, it’s personal. I think that’s important. I mean I understand, but it’s important to do justice by the characters in the songs and let them speak.

Do you write the words first?
I get all the music ready and then write all the lyrics for the whole album, taking it song for song. I’ve done it this way for the last three records. It’s a really slow writing process so I have to get really into it. Everything else drops away: I’m not reading, I’m not listening, I’m just doing that.

You were influenced by Hieronymus Bosch on The Vile Stuff and Peter Bruegel the Elder on Peasant. Any 15th or 16th-century Dutch painters for the new record?
No, I think those things were probably just hit on in an interview and then they get repeated in another interview and you end up talking about them more than you really should. I guess in the past I thought a lot about painting when I made previous records, and this new one would have been more like a TV series with a camera moving through the street.

Was slagging off Sting just something that happened in an interview as well?
I regret that, he’s very talented. I was being facetious. I’ve got a lot of time for Sting. I think I was being a dickhead basically. No, I’ve got no problems with Sting, I’ve got a bigger problem with myself having gone there. I don’t want to be negative about anyone, especially another musician. It’s so daft when you look back even a couple of years and you think, what a cock I was.

I was going to ask you what music you listened to when you’re running? I like a bit of latter-day Scott Walker or early-Gong, personally…
I actually don’t jog and this has been quite difficult. I’ve had a few messages over the last few days and they’re really disappointed. I’ve let people down. I’m more of a swimmer. That’s interesting that you use headphones, because the problem I’ve got at the minute is that I swim and I do four lengths and I go into the sauna and stay there for a long time, and then I maybe do another four lengths… Whereas if I got headphones then I could get into doing lots of lengths listening to podcasts. So I’m very sorry to your readers because I don’t like to jog.

Linkedin
RELATED ARTICLES
OTHER ARTICLES
Photographer Becky Tyrell went down to the fading banger and stock raceway to meet a community desperate to keep it alive.
The action took place in response to the 200 asylum-seeking children who were placed in hotels run by the Home Office who have gone missing.
A new law change is enabling Britain’s donor-conceived children to know the truth about their origins – but campaigners say the fertility industry must do more to protect people.
Filmmaker Laura Poitras discusses her new documentary which traces the remarkable life of the artist-activist and the impact of her battle against the US opioid crisis.
After blocking the Scottish government’s gender recognition reform bill, Westminster is now devising further changes to the law to make it harder for trans people to self-identify.
Following the release of his debut single, Deyaz talks battling addiction, dealing with his struggles through music, and building a budding music career from his living room.