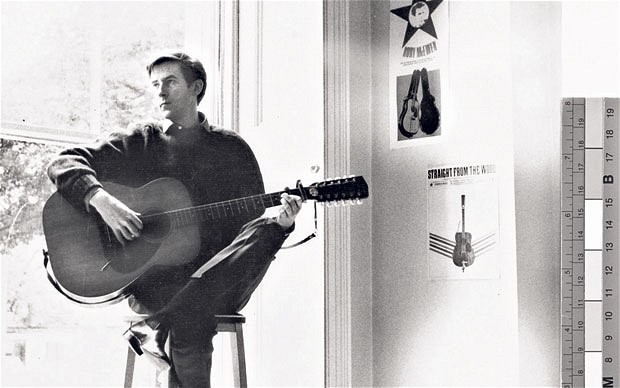 In homage to unsung hero Rory McEwan, writer King Adz curates five things you might not know about the Leadbelly-loving artist.

In homage to unsung hero Rory McEwan, writer King Adz curates five things you might not know about the Leadbelly-loving artist.

A new BBC Four programme – In Search of Rory McEwen – which premieres this Friday, February 13, is exploring the extraordinary backstory of ‘the man who brought the blues to Britain’.

In homage to the unsung hero, writer King Adz has curated these five things about him you might not know.

He did it all (himself): influential Folk singer, pop artist, tv face, Laird of the lowland, journalist, and painter of killer botanical art all without any formal training.

He Influenced The Beatles

He convinced George Harrison to learn the sitar and probably changed the sound of pop/rock in the process. Spreading the DIY word, as it were.

He pioneered the ‘Road Trip Movie’

Collaborated with the great German conceptual artist Joseph Beuys and in 1970 they made a road movie depicting Beuys’ journey from Edinburgh across to Rannoch Moor. A blueprint to a DIY staple – the road trip/movie.

In 1956 Rory travelled across America with his kid brother and creative partner-in-crime Alexander, search of blues legend Leadbelly’s widow, Martha along the way singing the blues as well as Scottish folk songs. When they found her she was so impressed by their understanding of, and skill at, playing her late husband’s music, that she allowed Rory to play Leadbelly’s custom-made 12-string Stella guitar, inspiring him to find his own.

Inspired by Leadbelly and his meeting with Martha, Rory brought a piece of American music history home with him.

In Search of Rory McEwen premieres on BBC Four February 13.

Linkedin
RELATED ARTICLES
OTHER ARTICLES
Theo McInnes’s photos of the annual event provide an intriguing snapshot of contemporary Britain.
The action took place in response to the 200 asylum-seeking children who were placed in hotels run by the Home Office who have gone missing.
A new exhibitions brings together the work of photographers who documented the deep unrest of these pivotal decades.
Filmmaker Laura Poitras discusses her new documentary which traces the remarkable life of the artist-activist and the impact of her battle against the US opioid crisis.
Following the release of his debut single, Deyaz talks battling addiction, dealing with his struggles through music, and building a budding music career from his living room.
Since 2007, Gideon Mendel has made 20 trips to document floods in 13 countries. The result is an alarming record of what has already been lost to the climate emergency.