Art & Culture / Music / ‘We constantly compete with each other’ 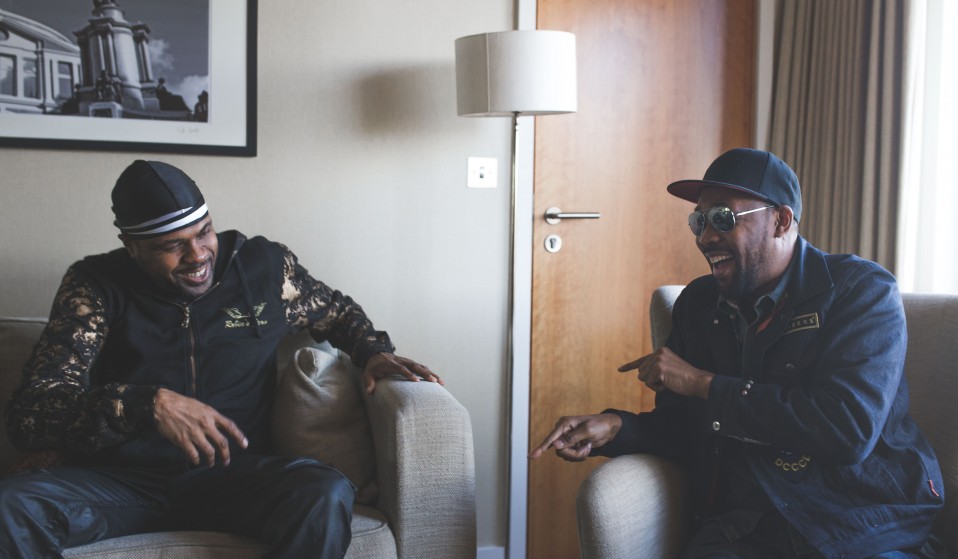 With the Wu’s new album signalling a mighty return to form, RZA and Mathematics discuss its conception – from facing up to criticism, to weekly Clan conference calls.

With the Wu’s new album signalling a mighty return to form, RZA and Mathematics discuss its conception – from facing up to criticism, to weekly Clan conference calls.

In a sunlit London hotel room, RZA and Mathematics of the Wu-Tang Clan are deep in conversation, analysing the early streaming figures from their new album.

“‘People Say’ will get up to 10 million by the course of the record”, the former announces in his trademark Staten Island drawl. “I think it’s going to continue to do well.” His clan-mate remains silent, listening intently and nodding, where appropriate, in agreement. Given the Wu’s deep-rooted relationship with kung-fu mythology, the whole master and apprentice narrative on display doesn’t go missing.

With The Saga Continues, the Clan’s latest record and first major release – one-copy albums aside – since 2011’s poorly-received A Better Tomorrow, it’s that relationship that forms its backbone; RZA, that ancient, all-knowing force, and Math, the hungry, would-be warrior. When it was announced the group’s long-term DJ (and designer of their famous logo) would be producing the new record in its entirety with RZA instead taking the backseat role of ‘executive producer’, it was quite literally a passing of the crown. They’re co-architects here, but make no mistake: this is very much Math’s moment.

“I’m not shy to say this, the facts are the facts,” RZA says, sitting in front of one of the room’s huge windows, light bending around him as if he asked it to. “Working on A Better Tomorrow – and, before that, 8 Diagrams – we had difficulty. Those albums were done based on my idea.”

“This album is the total opposite – Math just made his music. [The other members] heard it and instead of him asking them to get on, they wanted to get on. That’s how hip-hop really started, it’s how Wu-Tang really started, guys coming to my crib, hearing the beat and being like, ‘yo, let me eat that up real quick.’ So, the core of this record is that kind of energy – and that’s what makes it so Wu-Tang.”

You can hear that energy he’s referring to, both in his voice and the album. The Saga Continues is a return to form; a welcome addition to the empire. Speaking with RZA and Math – watching as they trade quips, stories and jokes – you can’t help but feel that they know it, too.

With The Saga Continues, you’ve taken the production made famous by RZA and pushed it into today. Were you conscious of making sure you found that balance, between classic Wu and your own sound?
Mathematics: As a producer, you wanna have your own voice. It was about going back to my roots, to the essence of hip-hop, without trying to infringe on anybody else’s. I didn’t wanna add no trap to it. What I wanted to do was something different.

How did it feel the first time you heard the finished product in its entirety?
RZA: It felt really good. My litmus test is my son, who was 11 at the time. If he don’t like it, it ain’t being liked! But he dug it, so it’s good in my house [laughs]. He loved it, yo. And my wife said something to me – I didn’t actually tell you this, Math – she was like, ‘did you make that beat, baby?’ I was like, ‘nah, that’s all Math!’ 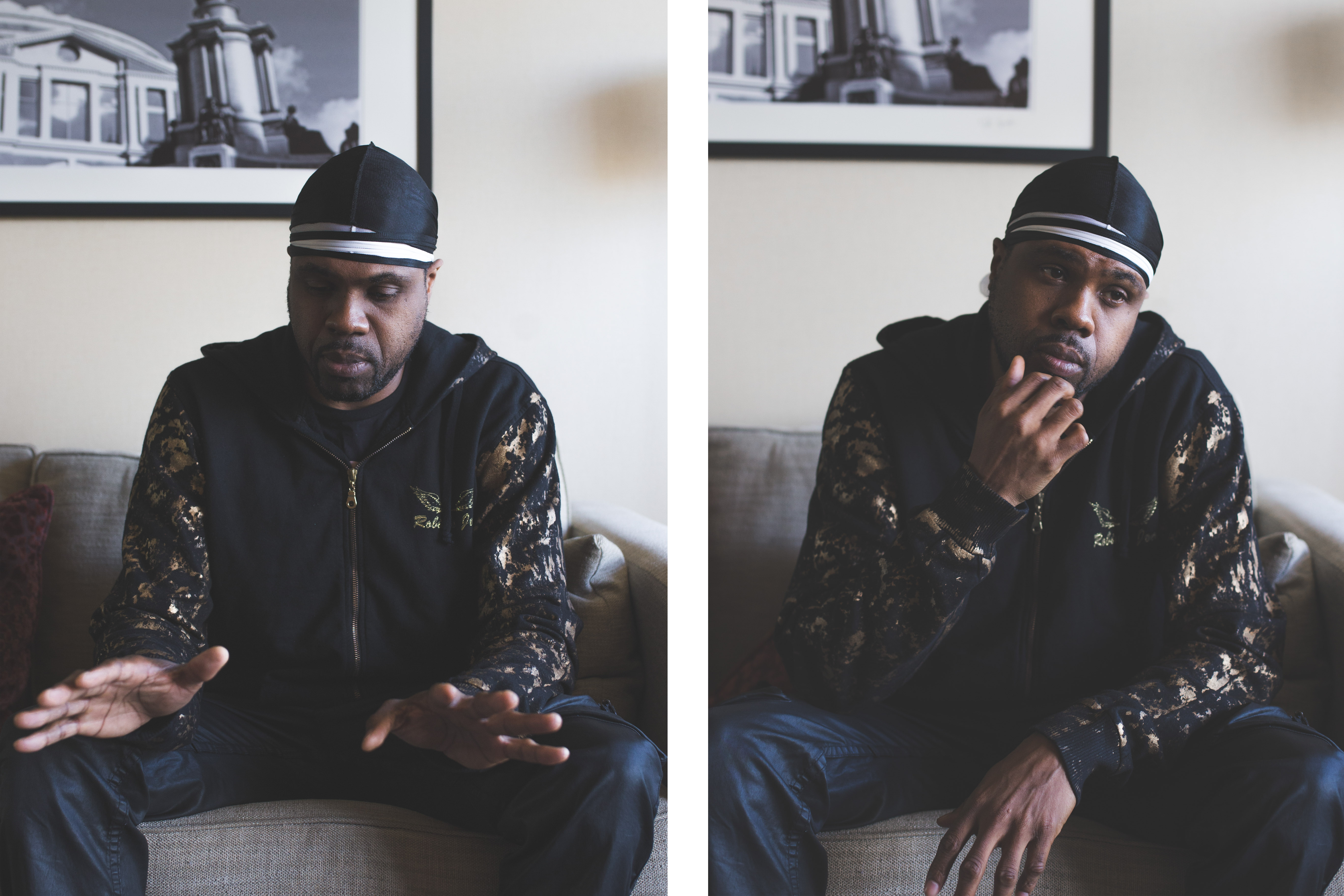 Tell me about this Wu conference call.
RZA: I’ll give you a small spoonful of it. We have a 25th anniversary coming up next winter, so I decided to start leading up to that this year. So, there’s a Wu Wednesday. There’s a call every Wednesday where everybody – every member, managers as well – has to join. It’s a fucking motherfucker.

It must get pretty heated in the run-up to a new release.
RZA: Some of the guys publicly went out and said they never heard the single album –  and that’s true. But that’s not an unknown tradition in Wu-Tang productions. The first album, 36 Chambers: it was not heard until it was done. It’s like a movie. The actors don’t see the movie until the premiere.

The point I’m making is, they didn’t hear this at the time, neither. They may have heard this album [for the first time] on release. They know their verses, what they did, but that’s what the producer has to do. So when you listened to it after that call, Math, you probably felt that confidence. ‘Fuck that conference call, when they hear this shit…’

Mathematics: Yeah, it just took me right there. I had that thought, ‘yeah, when my brothers hear this, they gon’ be happy.’ 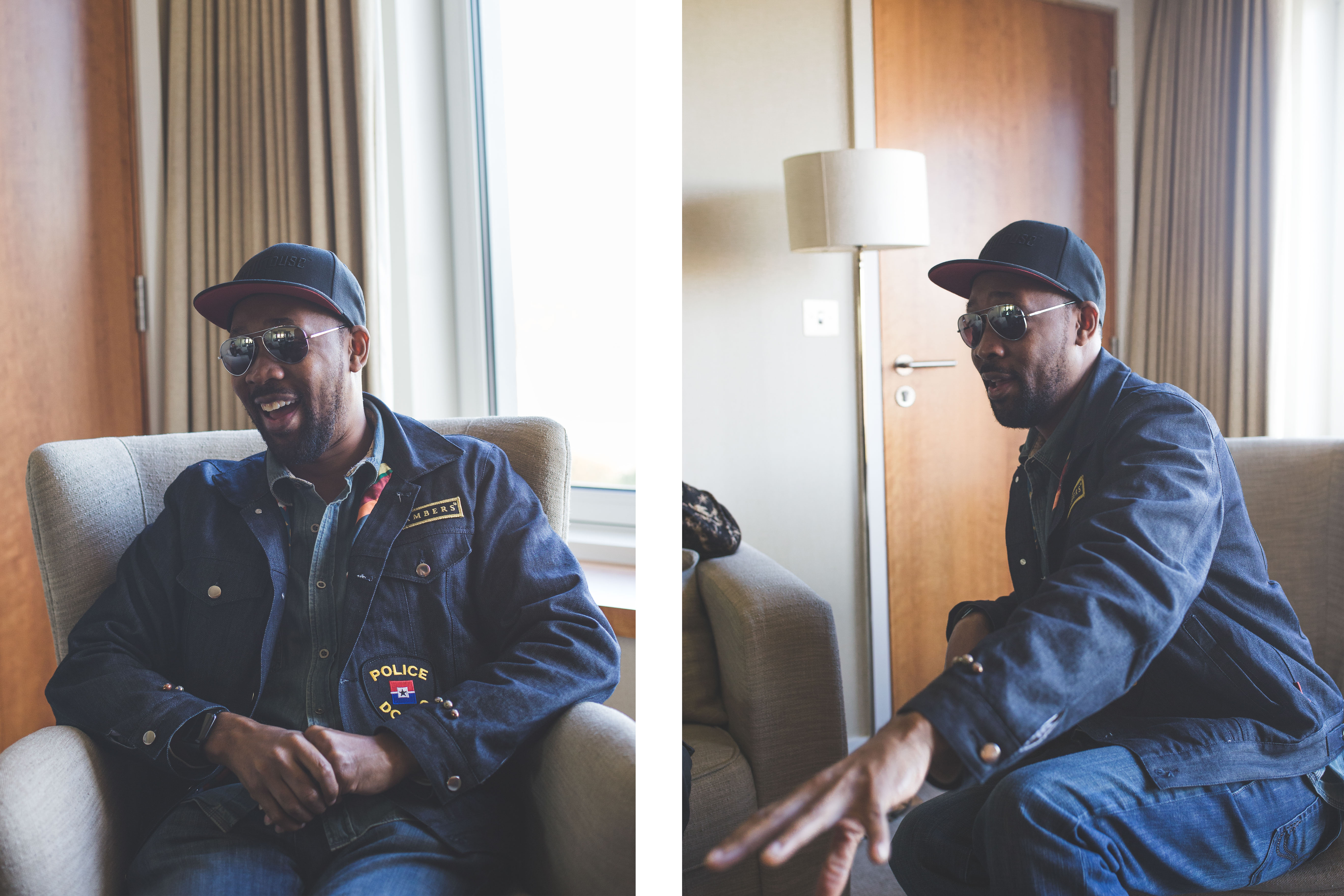 It’s an exciting time for you to release something, because it brings you a whole second wave of fans that maybe weren’t there the first time around.
RZA: Yeah, it’s super exciting. About two years ago, some festival that they invited Wu-Tang to come to, it was cool to look in the crowd and see 19, 20-year-olds saying the lyrics as well. Not just jumping and down, but knowing the lyrics. I remember talking to GZA after one of those shows and being like, ‘where did they get it from?’ and he was like, ‘ah, the internet.’

Where do you stand on all of that?
RZA: We wasn’t anti-internet, but I didn’t like the idea of music being devalued – and I still don’t like the idea of that. But, music is made to be heard, so it’s a double-edged sword. These kids who are going on YouTube and watching videos and getting their education that way, they discovered Wu-Tang – and they showed up to the concerts. It’s a blessing.

It’s also exciting to hear you engaging with contemporary issues. For instance, RZA, your verse on police brutality in ‘Why Why Why’ is brilliant.
RZA: Thank you for catching that. Math made the track and the track inspired that lyric out of me – I wasn’t shy about it. I’m conscious as a grown man – we are grown men – that it’s good to hear our point of view on today. We still talking about the shit that Stan Lee was writing about in his 1968 Soapbox column, where a comic creator is complaining about bigotry before we’re born – and now we going back there?

Also, there’s line about Mayweather. I’m a fan of him – if you watch some early Wu-Tang videos you’ll see him make an appearance – but I read that he dropped $50,000 at a strip club. I’m like, ‘you could have took that to a college campus!’ We’re wondering why women are looked upon as sex objects and being disrespected in many industries, yet we are condoning it by supporting that industry, when you could have just went a few miles down the road to a college campus and said, ‘hey, I want to donate this to all the female students.’

Inspectah Deck also gets a good Martin Shkreli diss in ‘Lessons Learn’d’ – ‘my price hikin’, like the pills Martin Shkreli sells’ – are you surprised to see him behind bars?
RZA: Yeah, I am surprised. You have to really, really tick off a lot of people when you have that much money and go to jail. I know Bernie Madoff went to jail, but he did a lot of shit. He had to tick a lot of people off to not even be able to have bail.

One of my favourite things to read about is the competition between individual members. Was that there this time around?
RZA: Yeah. It makes the MCs stronger. For instance, years ago, with Raekwon. On ‘Wu-Gambinos’, I went into that rapid flow of words all lining together: “Solid gold crown is shining / we’re blinding like some diamonds / I’m reclining in the sky on a cloud with a silver lining…” If you listen to his next verses after that he’s constantly doing it. I say, ‘yo why do you pin so many rhymes?’, and he’s like, ‘you started that shit – you started stuffing all that shit in, I’m stuffing my shit!’

The Saga Continues marks the 26th group or solo album this decade from Wu. Will that kind of thing ever be replicated?
RZA: Wow. Yeah, that’s a lot. Somebody brought it to us recently, they added up every Wu affiliate in the total years. 80 albums, like 800 songs. I said, ‘you know what, Wu might be a sub-genre.’ It can have its own station like Frank Sinatra. 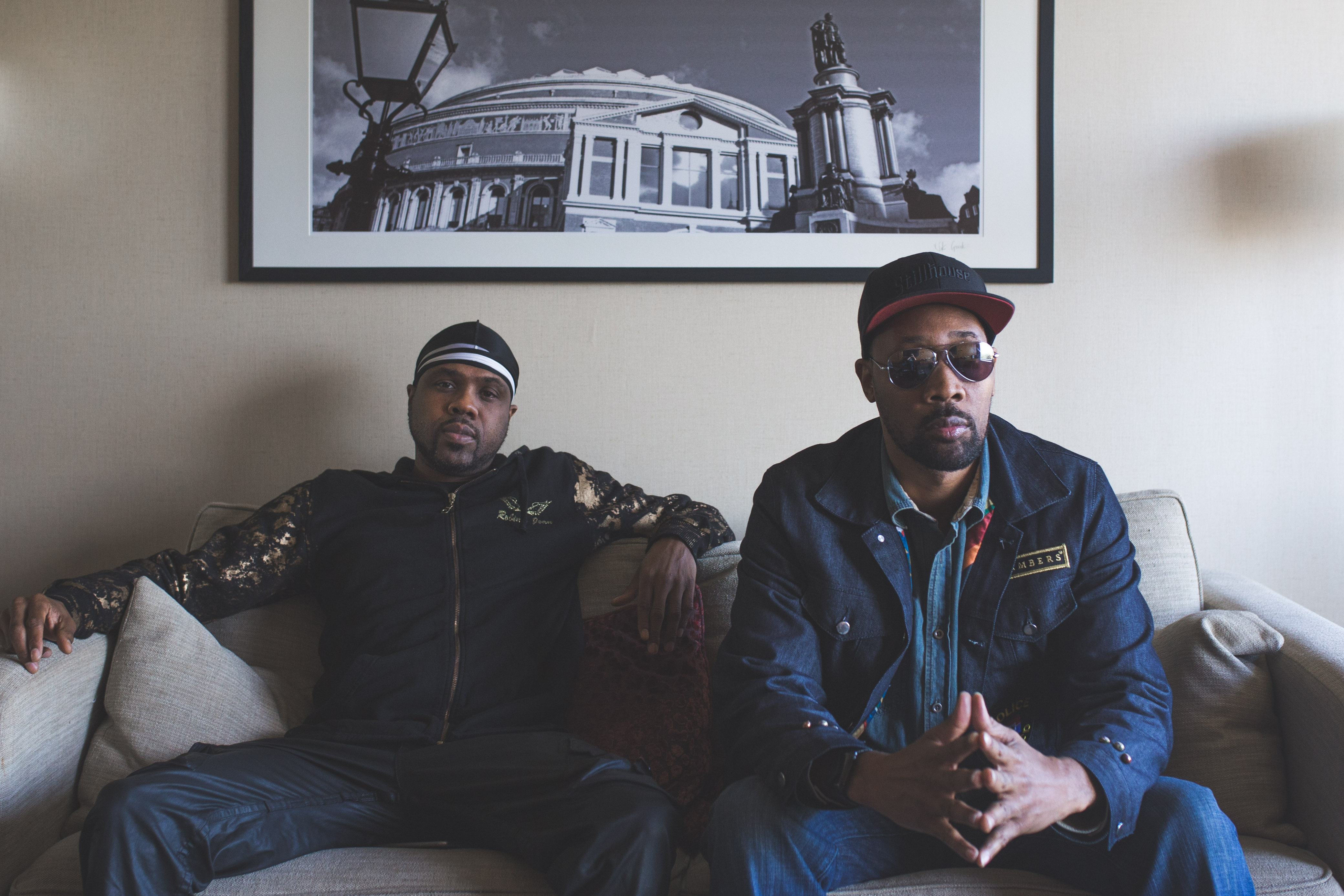 Your fans are famously dedicated. But, at the same time, if they don’t like something, they’re not scared to let you know about it. Do you still feel that pressure?
Mathematics: Our fans, they can be hard. They want what they want, know what I mean? You want what you want, but as a producer, when I’m making music, I make it for myself first. If I’m happy with it, I want everyone to be happy with it. I’m hoping they happy with it, but everyone has a right to their own opinion.

RZA: I’m a little bit more stubborn. Sometimes, I fight against the fans. They really gave me a hard time over the last five years. But, I hear them. This album is actually me listening to the fans. I’m like, ‘you know what, I gotta respect them.’ Their point of view is important to me. If it means that I gotta sit on the bench and let another play get up on the court to score, then I’m gonna sit on the bench. That’s what I did here – let Math get on the floor to score. I did read something, a fan wrote on my Twitter feed, he thanked me for sitting on the bench! And I appreciate that.

So, it was a case of listening to what they wanted?
RZA: They wanna hear that music that makes you wanna punch somebody in the face. That’s what they want. And Math was creating that. Now, we get to the point where we have this body of work totally created by him. What should The Abbot [one of RZA’s numerous alter-egos, consistently referred to in the third person] do? Should my ego jump in front of me? No, my ego didn’t jump in front of me. It was like, ‘let’s give this to the fans.’

Not only that, let me sit back and just be an MC. Let me be a servant. A good leader has to be a follower, a good general gotta be a soldier. So, I became a soldier for his cause. It was done for the betterment of the whole movement. Therefore, the saga continues.

The Saga Continues is available now.

Linkedin
RELATED ARTICLES
OTHER ARTICLES
From bleeding noses to crowd surfing, three image-makers reflect on capturing the scene in all its wild glory.
A group of young Palestinians have found temporary freedom in the act of parkour, reimagining wreckage and ruins as a series of high-octane playgrounds.
The idea that a younger generation is abandoning work has become a popular narrative online, but it doesn’t necessarily reflect reality.
By turning a real-life crisis into daytime television fodder, TV bosses have once again shown themselves to be completely out of touch with audiences.
Thousands of protestors gathered in Westminster to express their sadness and fury at the fatal police shooting of a young Black man in Brixton.
Thousands attended the annual event this year to wheelie through the city and call for ‘knives down, bikes up’.