Art & Culture / Music / ‘As a Black, gay person, I am constantly grieving’ 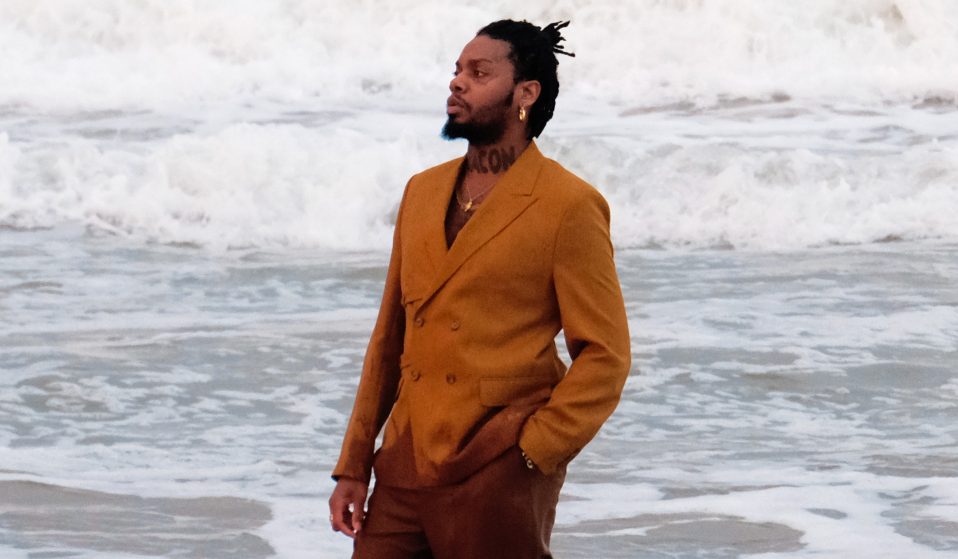 The Baltimore-born, LA-based artist constructed his latest EP in response to one simple question: ‘What ghosts am I welcoming into my house?’

Josiah wise constructed his latest EP around one simple question: ‘What ghosts am I welcoming into my house?’ But for the Baltimore-born, LA-based artist, the supernatural doesn’t always have to be haunting.

In recent times, with movement constricted and physical interaction scarce, many of us have been forced to re-examine the spaces we inhabit when we’re alone: physical, and otherwise.

For Serpentwithfeet, however, the conditions imposed by the past few months have been no new thing. By now, the LA-based musician (real name Josiah Wise) is more than comfortable with prolonged periods of introspection. It’s something he’s been working on for a while.

“It was kind of business as usual for me,” he says, speaking slowly over an echoey phone line. “Me sitting with me, me talking to me, me asking myself questions… I don’t intend for this to sound arrogant, but I think I have a pretty great relationship with myself.”

Born and raised in Baltimore, Maryland, Wise grew up as part of a religious family. His father was the owner of a Christian book shop, while his first musical performances came as part of the local church choir.

He embarked on classical training aged 11, but found the lack of diversity and classist undertones of the genre troubling. It wasn’t until a few years later, when he enrolled at Baltimore City College and joined its renowned choir – a choir made up of Black voices – that he was able to express himself fully in such a setting.

If, back then, it was a case of carving out space in a world that wasn’t always necessarily welcoming, the present day is about tending to the vast, miscellaneous one Wise has constructed for himself. Blending orchestral surges with his classical treatment of gospel and R&B, the music of Serpentwithfeet is, much like the moniker he has chosen, fantastical and uncanny.

Blisters, his debut EP, announced a remarkable voice to the world in 2016; the follow-up, an album titled Soil which dropped two years later , reinforced its singularity. Apparition EP, the latest instalment from the 31-year-old, exists as a three-track response to a single question: ‘What ghosts am I welcoming into my house?’

“We all welcome different things into our home,” Wise says. “It’s important to identify what those things are.”

The last few months have been disruptive in a number of ways. Have you been able to create during this period?
Honestly, I think we’re all creative every day. From morning routines, to the way that we cook breakfast – I think there’s a craft in all of it. I don’t subscribe to the idea that doing an oil painting takes more skill than driving on a highway [laughs]. I think there’s an art in both. When to switch lanes, when not to switch lanes – that’s a craft! There aren’t too many things that knock me off my centre or destabilise me. I’m usually pretty grounded in myself in that way.

Can you recall the last time something did destabilise you?
No. Because when I think about the lowest points of my life, it was writing and reading that always kept me. I’ve had some pretty low points in my life – I’m 31 now, so throughout my 31 years there have been things that have really disturbed me. But even as a kid, dealing with the things that kids go through in school, it was always words and images that were my anchor. I think that has remained as an adult. I don’t see that ever changing.

With Soil, many of those songs were fermenting for years. Lyrically speaking, there was a lot of looking back. Do you view Apparition EP – and whatever comes next – as belonging to a period of looking forward?
I don’t ever think you can look forward without looking back. To look forward without looking back is irresponsible. I think you see that happening with leadership: people think that we are past, or beyond, certain things – but I don’t think any of us are in life. I think we always have to assess what has happened 100 years ago, 500 years ago.

When I was working on Soil, in order for me to move forward… how do I put this as succinctly as possible? On Soil I was speaking a lot about my roots. To repeat myself, I don’t think it’s possible to move forward without thinking about your roots. There’s no way of getting past that. It’s always past and present and future at the same time for me.

You cite Toni Morrison as a huge inspiration. I’ve always been struck by this quote from Jazz: ‘What’s the world for you if you can’t make it up the way you want it.’ How do you go about building the world you want to inhabit?
I think, partly, [through] the way I make music. I think my music is definitely a tool for me to reimagine my life. That was a lot of what Soil was about and a lot of what Apparition is about. There’s always something fantastical happening, where objects are animate. I’m always thinking about that. But I’m also thinking about the different ways I’ve seen people love, the different ways I’ve seen people wonder about love. That’s present in all my work, I would like to believe.

The new EP feels more rooted in the internal and less concerned with the relationships you share with other people. Is that something you agree with?
I feel like the people around us are an extension of us. People that are close to us – our best friends, our partners, people that we experience close and intimate interactions with – are often reflections of what we wish we could be. Whether my song examines a romantic partner or not, I’m also talking to myself.

Like, when people speak unkindly about someone else, they aren’t talking about that person, they’re talking about themselves. You always reveal who you are through what you say about people. So I think I was trying to reveal something about myself through Soil. I was talking about lovers and partners, but I was also talking about what my needs were.

If we do surround ourselves with reflections of ourselves, what do you think your circle says about you?
I think I’m trying to be around people that love checking in with themselves. That is one of the most exciting things you can do. To ask yourself, ‘How do I feel about this? How do I feel today? What’s important to me this week? What does success look like to me this month.’ With a lot of my friends, a lot of our time together is rooted in checking in and talking through things. It’s not always heavy and deep. Sometimes it’s super jovial and it’s filled with laughter and playfulness. But with each of my friends, there’s always that deep reflection time with all of them.

When I was a little boy, when I was in elementary school, the girls loved reflecting. That was really important to me. The boys wanted to play football, run around, get hot and sweaty during recess. But I was more interested in reflecting on the way I felt during the first part of the day [laughs]. Now that I’m older, I have male friends and women friends that do that reflecting. I think my circle is a great reflection of me in that way. 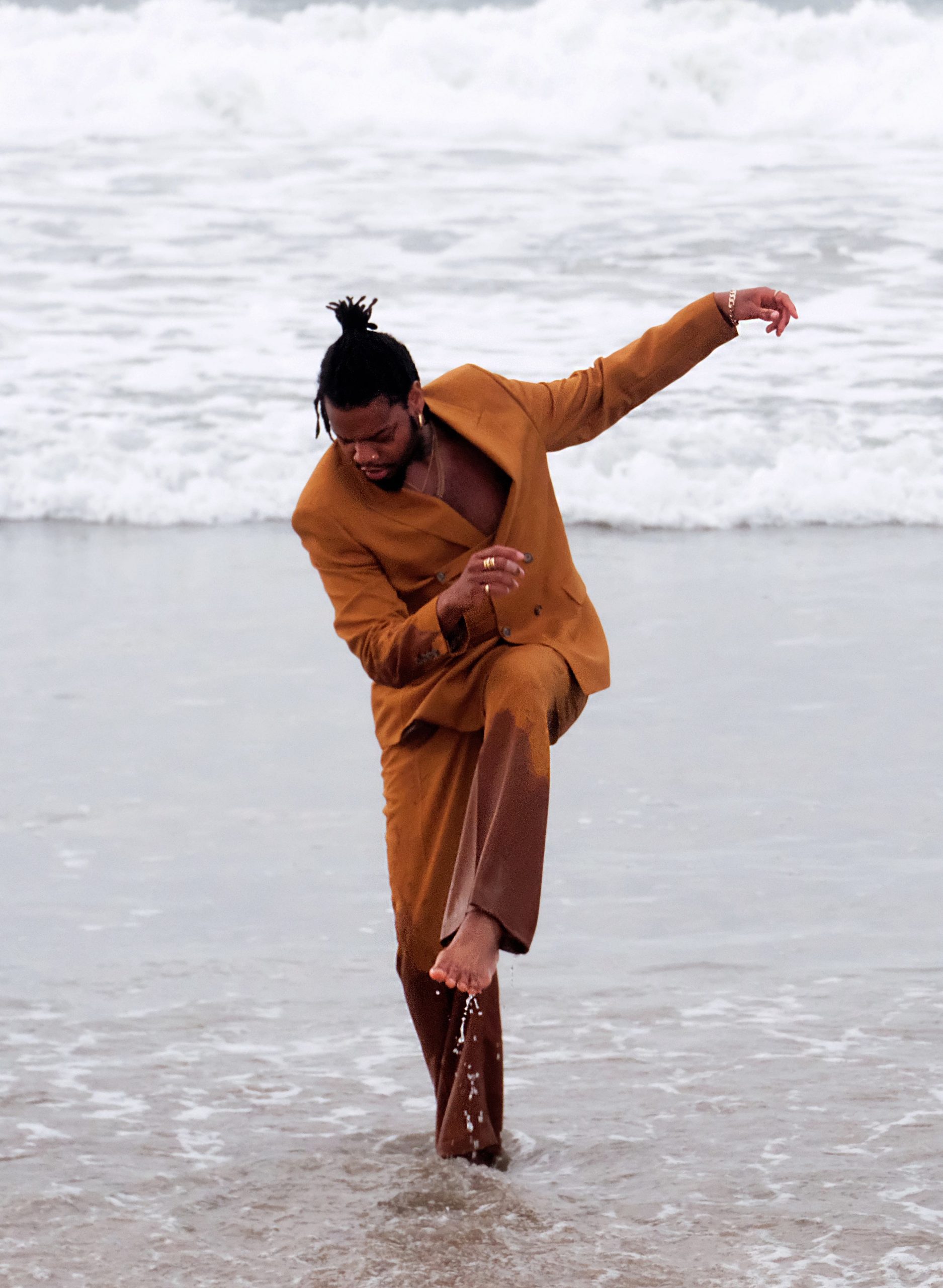 Do you view music a vessel for reflection?
Absolutely. Song is nothing but elevated speech. Which is why I never understand people who say things like, ‘It’s just a song.’ I’m like, ‘No, no. A song is elevated speech.’

There’s a lot of direct address in your music. Has that ever led to someone in your life responding to a certain lyric – has it ever led to resolution?
I don’t ever write about just one person. I’ve made sure since the beginning that I never exploit my love life, or friendship life, or family life. I like to keep those things very personal, very private. When I talk about things, it’s a lot of different things going on.

When I think about the song ‘Blisters’, that’s such a fantastical song. But when everyone heard it, they were like, “Oh my gosh, you must be so heartbroken!” In my mind, the song was supposed to be funny! Like, the world is closing down and the skies are getting black because someone hurt my feelings. That’s so ridiculous and hilarious to me. I thought people were gonna crack up when they heard it!

Obviously there wasn’t any particular person who I wrote that song about. But obviously I have dated, I have experienced a lot in my 31 years. I’m informed by the life that I live, but I hope my private encounters are dear to me. There is no person in my life that has ever hurt me badly enough to where I want to exploit them, or make people wish ill for them. I keep that very separate.

You’ve said in the past that it’s good for the soul to weep uncontrollably. When did you first realise that?
Action movies are pushed in America. We love an apocalyptic moment. We love to be like, ‘The world is gonna end in 30 minutes, somebody has to get the detonator!’ But I think what is often missing in our media is the importance of grieving. We aren’t post-racism, we aren’t post-misogyny, we aren’t post-patriarchy, we aren’t post-homophobia, we aren’t post-transphobia. There are so many things that we are not.

If we think, globally, about the way that we have exploited people, exploited the land… I think we should be grieving. We should all be picking time to reflect. The pandemic brings about so much grief, because we’re seeing, as humans, we really fucked up. It’s been the decisions of a few that have really fucked everything up. Not just now, but for hundreds of years.

As a Black, gay person, I am constantly grieving. I don’t think that I’ve ever not been in grieving. But it doesn’t mean my life isn’t filled with joy. I don’t think grieving means that you have a flat or two-dimensional life. I have a really dynamic and wonderful life.

Apparition EP is out now on Secretly Canadian.

Linkedin
RELATED ARTICLES
OTHER ARTICLES
The pro skateboarder withdrew from the 2020 Olympic Games so he could come out as trans. Now, he’s hoping to encourage others to live as their authentic selves – within the sport and beyond.
Taking us through one of the most dynamic years in recent history, Laylah Amatullah Barrayn new photo book contains tender yet confrontational portraits.
A new law change is enabling Britain’s donor-conceived children to know the truth about their origins – but campaigners say the fertility industry must do more to protect people.
After building his reputation covering the US civil rights movement in the 1960s, the photographer went on to produce some of the most enduring images of the past century.
Jeffrey Henson Scales intimate portraits and protest images of the BPP and its leaders offer a rare insight into organisation at a time of societal upheaval.
A new podcast is opening up the conversation between trans women and trans amorous men in the hope of building coalitions.