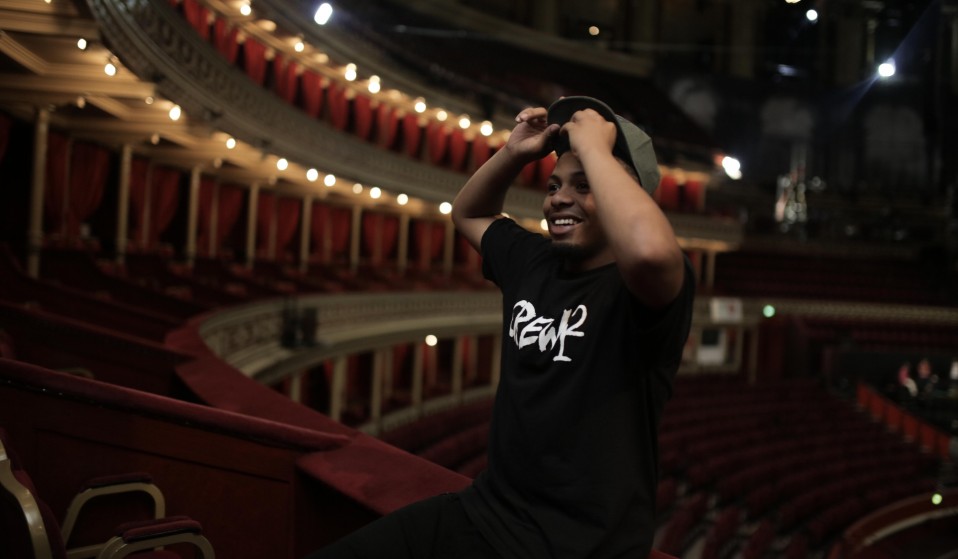 Nottingham’s hardest working MC is helping to build the foundations for a new generation of grime artists dragging the spotlight away from London.

Nottingham’s hardest working MC is helping to build the foundations for a new generation of grime artists dragging the spotlight away from London.

We’re walking in the footsteps of Stormzy and Wretch 32, who played here for BBC Radio 1Xtra’s Late Night Prom, helping to cement grime’s global standing by playing at one of the world’s most famous venues. For a genre that barely anybody outside of its East London birthplace had heard of in the early 2000s, it’s an indication of how far grime has come – and how, for the new generation, the sky’s the limit.

At just 19, Snowy is one of the brightest lights in a wave of Nottingham grime talent helping draw the limelight away from the capital. As Nottingham is making a louder and louder case for recognition as a major grime hotspot, Snowy is doing what he can to support the ‘youngers’ coming up in his wake. 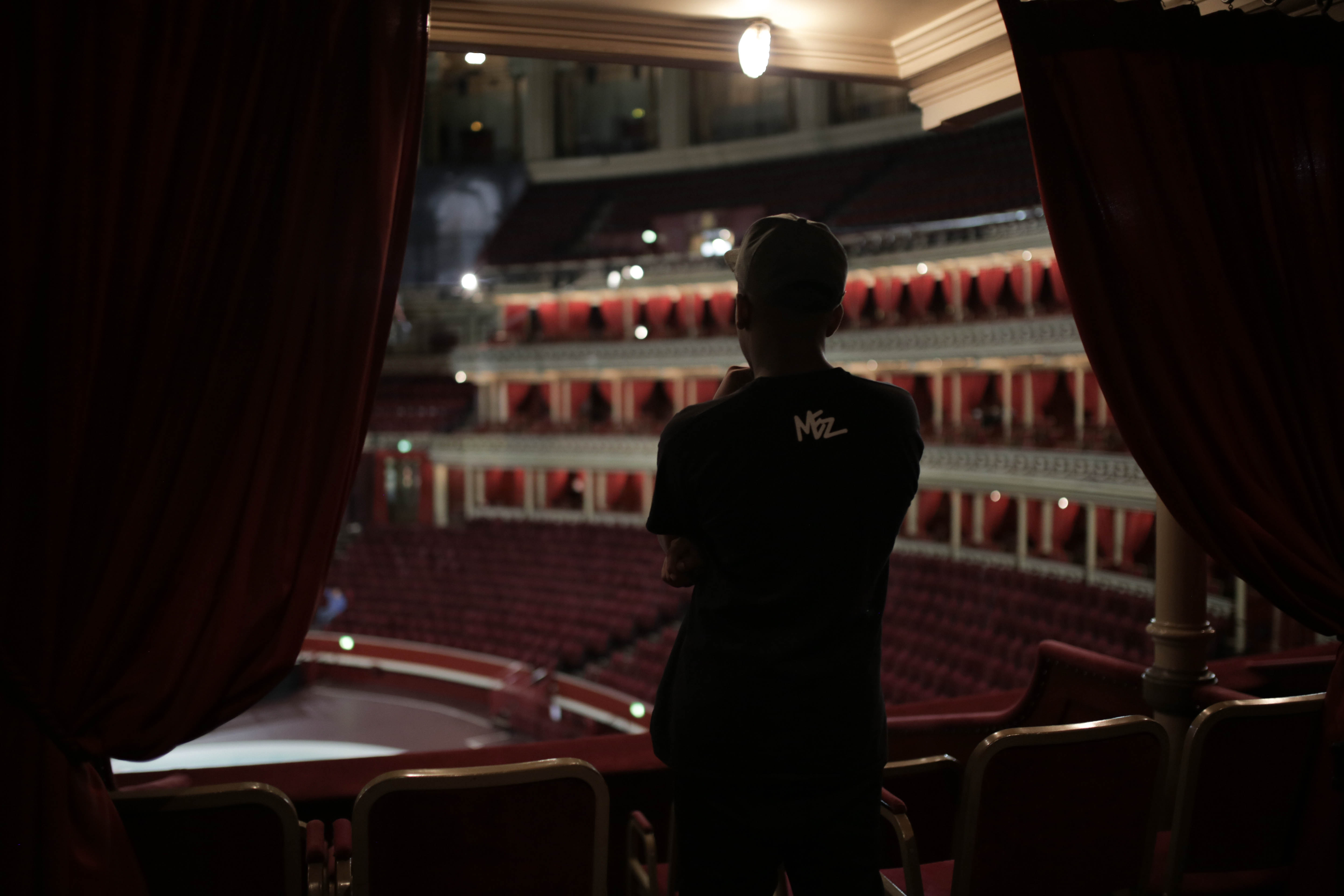 Sitting in one of the private boxes, overlooking the immense Victorian arena, as classical musicians from the BBC Proms orchestra begin tuning up, it seems like a good spot to enquire about his future musical ambitions. Does Snowy ever see himself headlining the Royal Albert Hall?

He pauses for a second and it’s clear the idea’s not top of his list. “Everyone has different aspirations, I guess,” he says, diplomatically. “Grime is more of a club thing, really. But don’t get me wrong, I’d do it. If I got the call, I wouldn’t say no.”

After picking up a mic aged 12, Snowy took his first steps at youth clubs alongside other local MCs and after spots on BBC 1Xtra, SBTV, Radar Radio and Rinse, he’s now one of the leading figures in the scene. During that time, Nottingham grime has gone from a near invisible scene in a small Midlands city to make waves across the country. “Coming from Nottingham, it’s mad I’m getting asked to do things because that doesn’t happen where I’m from,” he admits.

So, what would a Snowy set at the Royal Albert Hall look like? He steps to the edge of the booth, looks out and replies. “I’d probably turn it upside down. It’d be crazy, a little bit mad in here. I’d have strippers around the sides, probably in the arena part as well. Could we accommodate that? Stripper shows, a few poles. I suppose a fire or two, that would be cool. I’d make it look kinda crazy. Maybe a slide.” 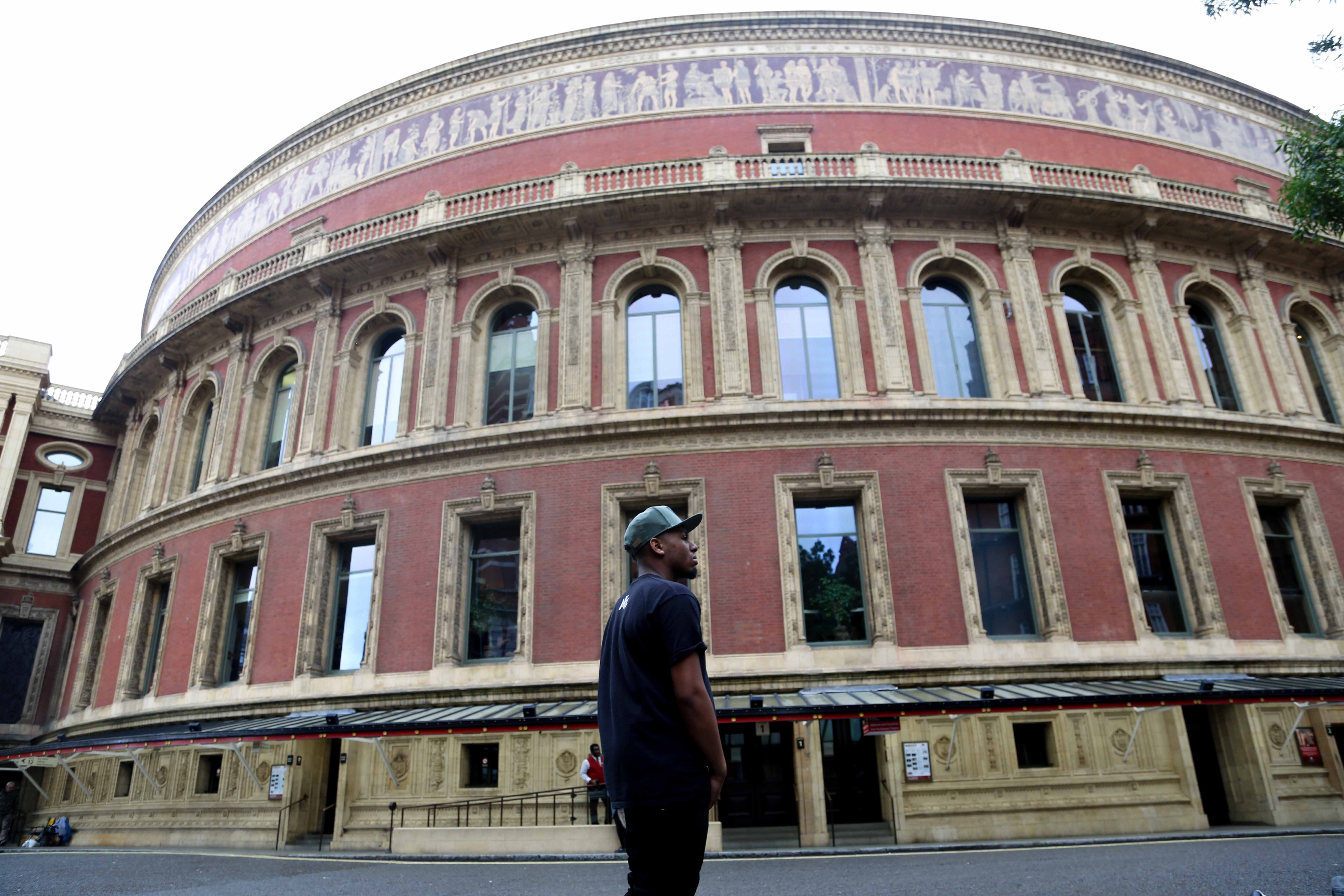 Although the Proms might not be calling just yet, Snowy has certainly established his reputation as a ladies man. On the tube back across London, he fails to disappoint. “You can take my picture too, if you like?” he responds cheekily to one woman who looks up when she hears the photographer’s shutter snap. While I can’t vouch for his success in this area, his work rate is impressive – and he applies a similar approach to his music.

“You see with music, I’ve never had goals,” he explains. “I just do whatever comes next, if that makes sense. I never thought, ‘I want to be here in five years’. I just take opportunities as they come, but of course you make your own luck if you put in the work – and I’ve been putting in the work.”

Snowy claims he’s realistic about his prospects and not making concrete long-term plans for fear of disappointments, but he’s made some smart movements to carry himself forward. He was accepted to the Future Bubblers programme, run by Gilles Peterson’s Brownswood Recordings and Arts Council England, which aims to find undiscovered artists from regional cities across the country and give them mentoring to break into the London-centric music industry. 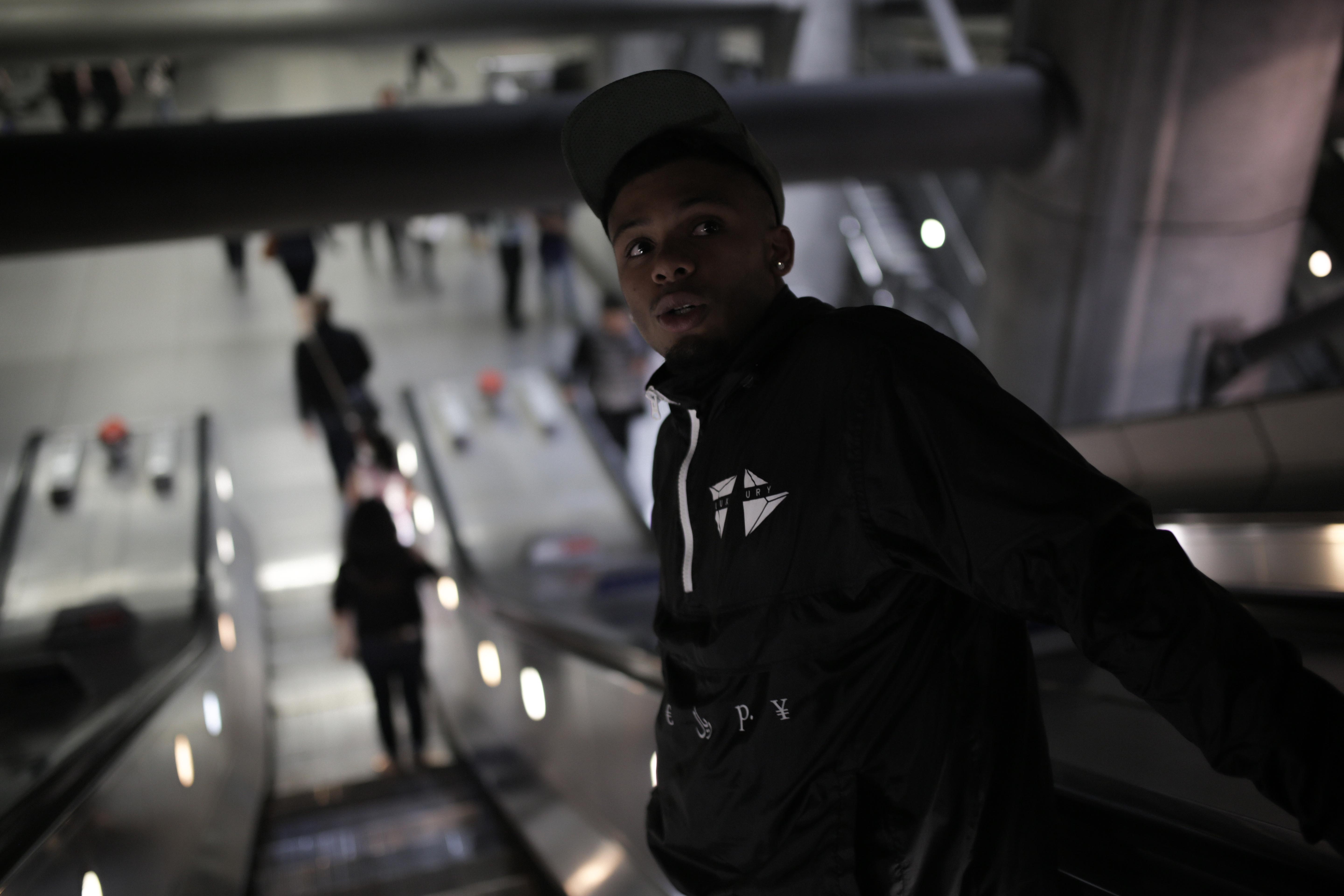 Snowy has a love/hate relationship with Nottingham – a city with a bad rep for crime and violence and picked up the nickname ‘Shottingham’. “Notts is wild,” he explains. “I would probably have done something stupid and got killed by now if it wasn’t for music. I know people who’ve got stabbed, shot, I’ve been shot at… It’s a bad mind city, there’s a lot of negativity, but I still wouldn’t want to live in London.”

He might not be singing praises about his city at all times and has no interest in being seen to be flying the flag for Nottingham, but he’s made a concerted effort to support younger MCs in his area – although only the ones that he’s feeling – and has helped hooked them up with connections and brand endorsements. 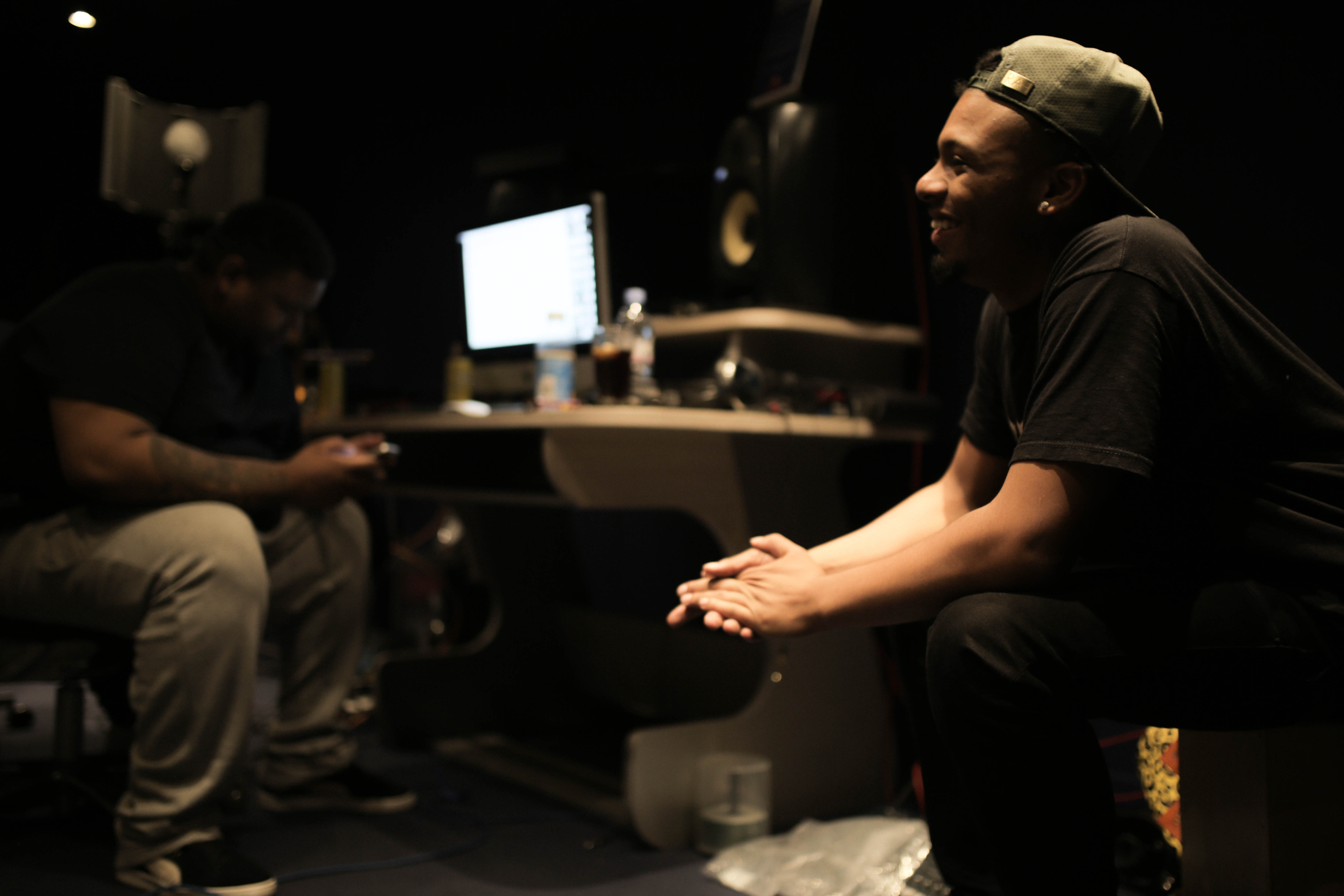 Snowy himself has also picked up support from Red Bull and after the Royal Albert Hall, we head to the their studios near London Bridge, where his crew of Nottingham MCs Kyeza, J Dot and Mez are facing off against a trio from Manchester in Red Bull Studios: Grime-A-Side, a city vs city tournament. “It’s an excuse to get out of Nottingham really,” he explains.

So, does coming from a small city like Nottingham without established connections to the industry hold him back? “It’s a mixed blessing,” Snowy explains. “There aren’t the same opportunities you get in London, but if you’re prepared to put in the effort you can make the right connections online. We’ve got the foundations developing for something big in Notts, but it’ll take a few years. It’s all about hard work, working hard constantly. I’m not bound to Nottingham, but elsewhere I come conquer and then leave.”

Check out more from Snowy.

Linkedin
RELATED ARTICLES
OTHER ARTICLES
The action took place in response to the 200 asylum-seeking children who were placed in hotels run by the Home Office who have gone missing.
Photographer Becky Tyrell went down to the fading banger and stock raceway to meet a community desperate to keep it alive.
Theo McInnes’s photos of the annual event provide an intriguing snapshot of contemporary Britain.
After blocking the Scottish government’s gender recognition reform bill, Westminster is now devising further changes to the law to make it harder for trans people to self-identify.
After building his reputation covering the US civil rights movement in the 1960s, the photographer went on to produce some of the most enduring images of the past century.
A new law change is enabling Britain’s donor-conceived children to know the truth about their origins – but campaigners say the fertility industry must do more to protect people.