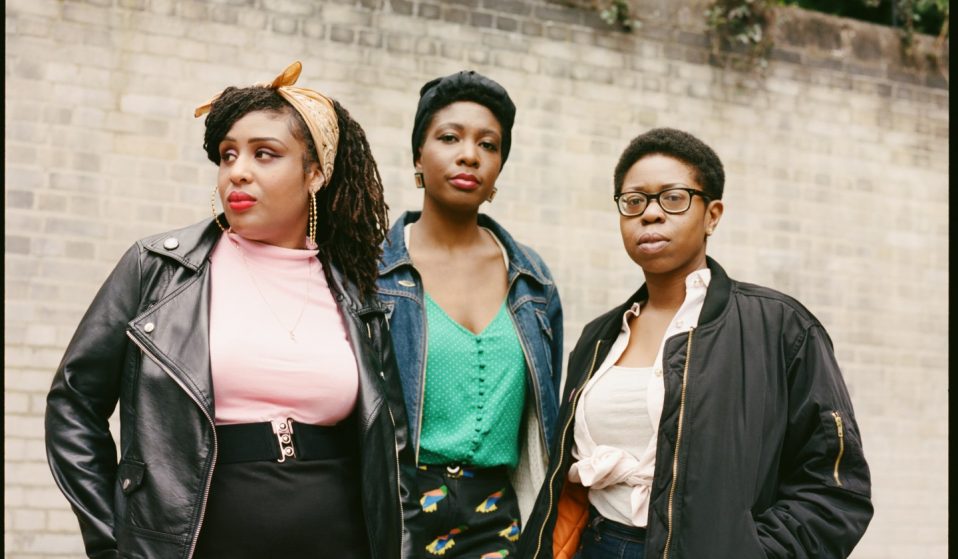 With their fast-paced beats, soulful tones and straight-talking lyrics, Big Joanie are shaking up the UK’s contemporary punk scene.

With their fast-paced beats, soulful tones and straight-talking lyrics, Big Joanie are shaking up the UK’s contemporary punk scene.

In the back room of a punk venue in Sheffield, crammed into a small space with no stage and lighting that is controlled by someone accidentally leaning on the switch by the doorway, Big Joanie take up their instruments. The audience is restless after enduring a lengthy experimental set apparently only prepared the day before. But as soon as Stephanie Phillips steps up to the mic, Chardine Taylor-Stone raises her drumsticks and Estella Adeyeri readies her bass the room comes to life. The energy and passion of the trio is infectious, within moments the audience is captivated with their fast-paced beats, soulful tones and straight-talking lyrics.

Founded in 2013, Big Joanie refer to their sound as “black feminist sistah punk”, influenced by an eclectic mix including the Riot Grrrl movement, Tina Turner, My Bloody Valentine and PJ Harvey. Their first gig was at the aptly named First Timers, where every act was performing together for the first time. Since then they have supported the likes of Downtown Boys, Shopping and Parquet Courts, performed on the BBC Music Introducing stage at SXSW, and recorded their first album, Sistahs.  Released in November 2018, the record captures the band’s reflections on friendship, growing up, and their hopes for a bright future.

Fresh from their trip to SXSW where they played nine sets in just six days, Big Joanie speaks to Huck over Skype about family influences and the need for music history to better remember performers of colour.

Let’s start by talking about the name of Big Joanie – am I right in thinking it is named after your mum Steph?
Steph: Yeah, a little bit. I just thought that Big Joanie was a cool name in general, but then my mum is called Joan. In Caribbean culture, you’d say kids are ‘acting big’ or ‘acting up’ which is a way of saying someone is acting grown up when they are little. So, Big Joanie is meant to represent a strong confident woman and I think my mum represents that to me. That is the idea that you are supposed to take away with Big Joanie.

On your Facebook page, it says one of the main aims of the band is to “function as a space where its members can be completely themselves as black women, and within it discover their own power in creativity.” Do you think at the moment the only safe space to be completely yourself in music is with other black female bandmates?
Chardine: Yes. There’s a freedom in these sort of spaces because the levels of micro-aggressions – involving racism and sexism – are dampened. They are not completely erased because people bring internalised stuff with them, but there is that space to be yourself without having any sort of oppressive lens onto you. It is a very rare space sometimes as well. Outside of your family and your friendship groups, where else do you get to have that space? You don’t get it at work, you don’t get it on a day-to-day basis, and sometimes people don’t get it in other feminist groups, so it is important.

Steph: It is also important as black women who are into punk and into things that aren’t considered traditionally part of black culture even though they really are. It is hard to find our space as women who are seen as weird or kind of going against what is supposed to be traditional. It’s really important to have that space to be able to talk about things that are going on for us while creating a space for ourselves and other women and black people who are like us.

You are not afraid to address tricky subjects. I was at a gig where you introduced the song ‘Token’ by saying “this is for the white people that think they aren’t racist because they have one black friend.” The audience was nearly all white. What did you want the audience to think about?
Chardine: Probably why they are all white would be a good start! But I think – like Steph says – she wrote it in terms of thinking about when people are like ‘oh I am not racist because I’ve got that one black friend’. Sometimes it is not even an actual friend just someone they know, which is a little insight into how racist segregation works in this country. A while ago, a report came out that said the number of white people black people know as friends is around five, but the number of black or people of colour that white people know is like zero to one. It is a white majority country, but it just goes to show that we are actually more integrated than white people are with everybody else.

Punk isn’t really known for being particularly diverse though. How do we change that?
Steph: I think it is about remembering the punk scene’s real history. I think music history constantly gets white washed, but people of colour have always had a big influence on the punk scene, whether it is the early origins of rock ‘n’ roll or guitarists like Sister Rosetta Tharpe or reggae music. It is that weird thing of people thinking it’s a white scene, when really it isn’t.

Chardine: It is also about the invisibility of people that were actually there as well. Poly Styrene is a good example – it takes a while for people to realise she was a black woman. Historians don’t seem to talk about her race even though she quite clearly did. It is asking how are bands remembered? Do people remember the black guy in Dead Kennedys or Minor Threat?

Estella: Or more recent bands like TV on the Radio, which is an indie band with black members and then years down the line it is not mentioned. When we were growing up there were so many people of colour in alternative music that just get forgotten. People think that Skin from Skunk Anansie was the only black woman making radio friendly alternative music when clearly there have been so many.

So actually it’s about recalling things better?
Steph: It has always been about what people want to remember. People don’t want to remember a black person on the stage because it doesn’t fit into their view of what rock n roll is – they want to remember the topless white guy on stage saying something vaguely political that’s probably been said better 10 times over. People of colour have always been on those stages. It’s not like we haven’t done it well before, but it’s whether people want to let that sink in.

Chardine: Another issue is like how Jimmy Hendrix was tokenised and separated from his community and his culture, until he became something other than black. There is this story of when he came to the UK and he wanted to come to Brixton because that is where the black community was in the 1960s, so he clearly understood himself as a black person and as an African American. He is historicized as if he is something “other” – a special person that doesn’t come from that culture or those people. I feel like maybe artists were told not to talk about race too much, whereas now because of the political environment and because there are more black people in this sort of music, hopefully artists feel more comfortable talking about being black.

What advice would you give to young women of colour wanting to get into the music scene?
Chardine: Put a Facebook post out – oh sorry young people – Instagram! Just get going. That’s the beauty of punk, you can just start with one or two chords and get on with it. And the network is there through London’s Decolonise Fest and other places where you can reach out to find other people to start a band with.

Steph: Don’t worry about failing. I feel that for a lot of black people they are told they have to be perfect or nothing else, but the thing about punk is it teaches you that there is so much room within the idea of failure and there is so much room to find new ways of creativity. Remember if you get a cheap instrument and you think you’re playing bad it’s just because the instrument is a bit shit!

Big Joanie plays Manchester Punk Festival, 19-21 April. For the full list of upcoming gigs across the UK and Europe, visit the group’s Facebook.

Linkedin
RELATED ARTICLES
OTHER ARTICLES
As the Scottish government announces a rent freeze, an activist with Living Rent who fought and won shares how they did it, and what must come next.
The idea that a younger generation is abandoning work has become a popular narrative online, but it doesn’t necessarily reflect reality.
In his 2008 series, the photographer pictured himself as Angela Davis, Martin Luther King Jr., Malcolm X, and other prominent figures.
A 37-year-old woman shares how her abortion led her to become a clinic worker, and the abuse she’s received in that role.
Following the announcement of an 80% hike in the energy price cap from 1st October, crowds gathered outside the offices of energy regulator Ofgem to protest and declare their intention to undertake a payment strike.
For over a decade, gamblers have won big by employing people to place live bets from the court. But does this dubious method still work?