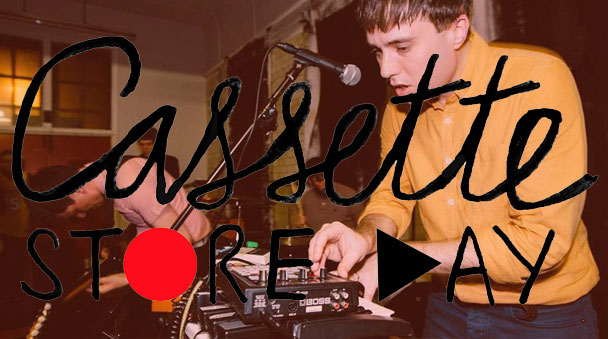 Dan Reeves of Soft Walls celebrates the tape in the run up to Cassette Store Day this Saturday, September 27.

Dan Reeves of Soft Walls celebrates the tape in the run up to Cassette Store Day this Saturday, September 27.

In the run up to the big day, this Saturday, we’re asking some of the diverse Cassette Store Day artists to tell us about their favourite cassettes and explain what the humble tape means to them. Fourth up is Dan Reeves of London-based psychedelic outfit Soft Walls.

What’s the first cassette you owned?
I can’t remember exactly. It was either Michael Jackson’s Bad, which was bought for me when I was in hospital as a kid with appendicitis, or, a copied tape of Guns N’ Roses Appetite For Destruction, which was given to me by a friend, who had in turn inherited it from his older brother. I must have been about 10 I think. I loved it so much and used to listen to it on repeat in my bedroom. I even went to the local library and copied the front cover, so I had a hand-drawn replication of the sleeve. It was pretty bad-ass. I was into the skulls.

What was the last cassette you bought?
I think the last tape I bought was Feature’s excellent Culture Of The Copy EP, on Tye Die Tapes.

What’s your favourite cassette ever?
One that sticks in my mind from recent years is The Chad Tape which is a collection of ambient and noise pieces by Chris Reimer, who was the guitarist in one of my favourite bands, Women. Chris died suddenly in his sleep in 2012, and this tape collection was compiled by his friend Chad Van Gaalen. It’s a really nice collection of stuff that may have never seen the light of day. Chris was a great talent, this tape if further proof of that.

What’s the best cassette artwork you’ve ever seen?
At the moment I’d say that Where To Now?’s output is pretty flawless, James Hines is a visual genius. I love the way the aesthetic he’s created runs throughout all their releases. they’re instantly recognisable. Likewise, I really, really like the artwork on everything that comes out on Night People too. Anything where there is a consistent style or theme I’m a sucker for!

What’s the best mix cassette you ever gave/received?
Joe who plays guitar in the Soft Walls live band made me an excellent ’60s garage tape which I’ve repeatedly spun. And for my birthday last year my buddies Tina and Andy from Teardrop Factory made me a fantastic ’60s/’90s tape with an era on each side. The artwork (which Tina put together) was a montage of screaming Beatles fans.

Why are cassettes awesome?
Because they are cheap and look great. Take a chance on something you don’t know!

What cassette release are you most looking forward to this store cassette day?
UV Race compilation on Suplex is a must-buy for me as I don’t physically own any of their LPs, also the compilation that Negative Space are putting out looks ace, which Soft Walls also happen to have a song on FYI.

Linkedin
RELATED ARTICLES
OTHER ARTICLES
The New York rapper pushed hip hop into bold new realms. He lived through a dark time – but with one hand on the mic, he survived to tell the tale.
The Bots may have been fresher-faced than your little bro, but they've never been babies in the world of punk.
Cassette labels across the UK and the US celebrate the analogue format September 27 with new releases, rare reissues, special gigs and all-out tape-themed geekery.
Courtney Barnett explains how she conquered the music world from her Melbourne bedroom.
Artist, writer and 'zinemaker Jocko Weyland exhibits a collection of his cassettes, 1980-2005, in San Francisco.
Behind the scenes at the Growlers photoshoot at home in Orange County with rad Encinitas-based photographer Embry Rucker.