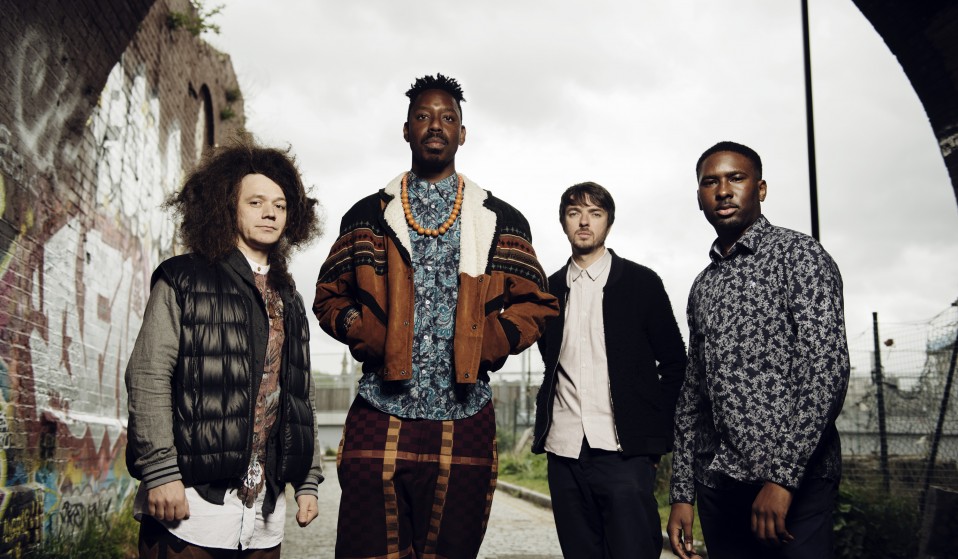 Sons of Kemet and The Comet is Coming frontman Shabaka Hutchings explains how a new generation of artists are rediscovering and reinterpreting Africa’s immense musical, artistic and stylistic heritage.

Sons of Kemet and The Comet is Coming frontman Shabaka Hutchings explains how a new generation of artists are rediscovering and reinterpreting Africa’s immense musical, artistic and stylistic heritage.

The sun is shining brightly on Arnold Circus in Shoreditch, East London. But today there’s even more colour in the air than you’d expect from a regular Summer Sunday – and the palette is a vibrant mix of reds, blacks, greens and yellows. Beneath the elevated bandstand, the crowd filling the street are throwing some dazzling colours, strong prints and glittering gold jewellery.

We’re in the heart of African Street Style festival, an annual celebration of London’s brightest designers, artists and musicians, who are rediscovering, refreshing and remixing African influences to bring them firmly up to date. Watching proceedings from above sits Shabaka Hutchings, the frontman of Sons of Kemet, the Mobo award-winning jazz quartet who wear their African musical influences with pride. 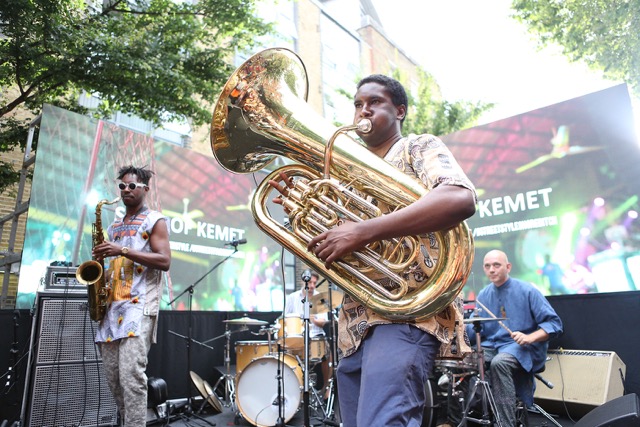 Born in London in 1984, Shabaka moved to Barbados aged six, where he began studying music. When he returned to the UK at sixteen, he came back carrying a classical music education, an obsession for hip hop and a deep interest in the way music and culture has percolated throughout the Afro-diaspora: to the Americas, the Caribbean and Europe – and back again. The saxophonist, band leader and composer is named after an ancient Nubian ruler of Lower Egypt and his main outlet is Sons of Kemet, whose name pays tribute to perhaps the greatest African civilisation in history, Kemet aka Ancient Egypt.

“[Naming the group Sons of Kemet] is part of getting the word out there,” Shabaka explains, “because people don’t know that Kemet/Egypt was a civilisation or that the links between Egypt and Ancient Greece formed what we think of as Western philosophy. The intention is that people hear the music, read a bit more and come into contact with that whole body of information and history.”

Taking a pew to talk with Shabaka is an education. A devoted student of music and ethnomusicology, he’s bursting with his own theories about how various genres of music came to be and the languages, rhythms and codes they owe to one another. He’s also a great person to comment on the resurgence of interest in African music: from labels like Analog Africa and Awesome Tapes from Africa, who are re-releasing innovative artists written out of the music history books, to the groups like Owiny Sigoma Band and Africa Express, launching exciting collaborations with contemporary musicians.

“People are realising there are connections between musics and we now know that all music comes from Africa,” Shabaka explains. “With more and more recordings becoming accessible, people are able to go deeper into it and are realising that Africa isn’t traditional. The only reason we see African music as traditional is because we haven’t been able to access those progressions. Once we’re able to find albums like Space Echo [a re-release of undiscovered electronic music from 1970s Cape Verde] you realise these guys were doing stuff that we had no idea they were doing. Or you might not have heard of Orlando Julius and realised the links between him and James Brown’s music.” 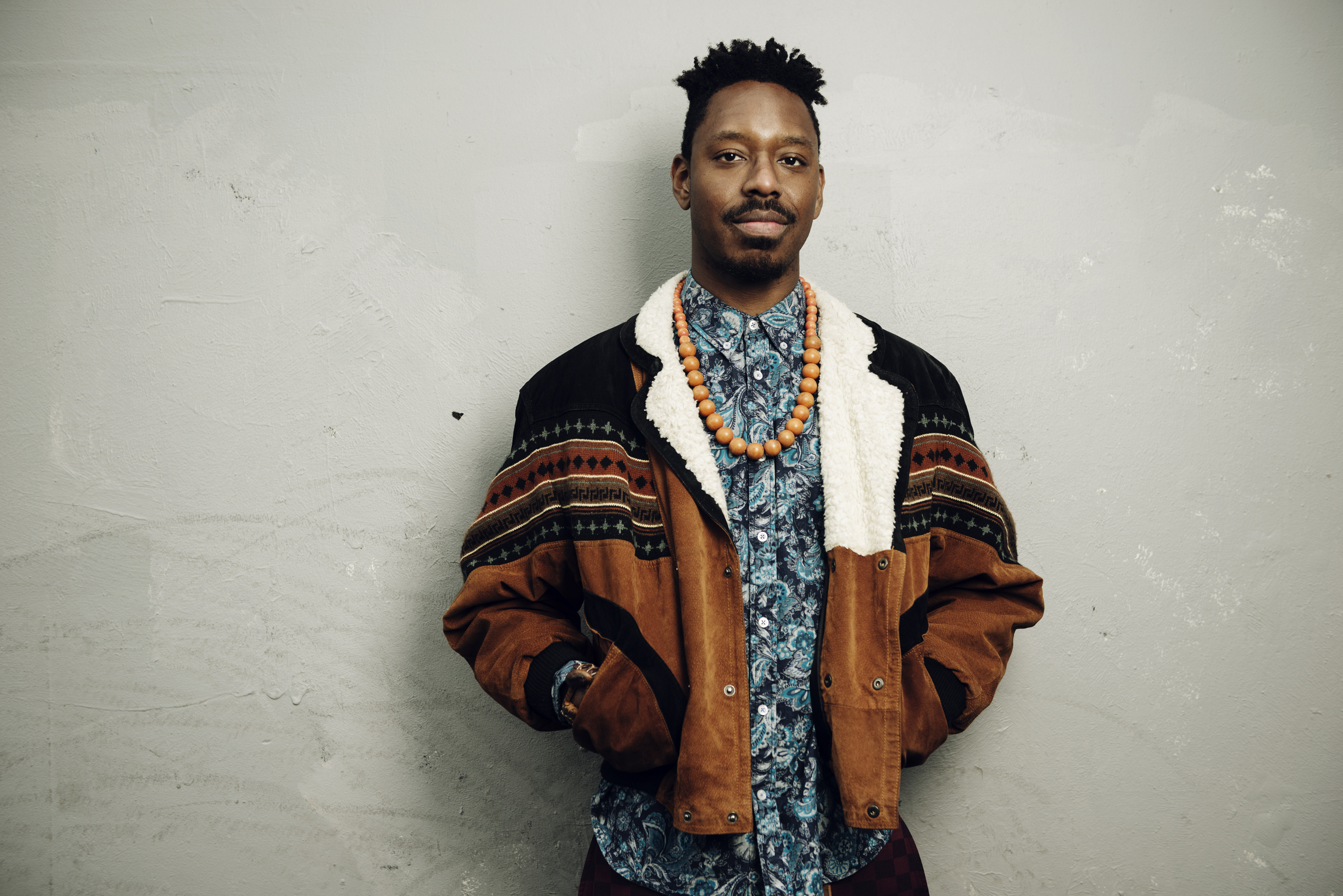 For Shabaka, there’s an endless resource of material to draw on if ever he’s in need of inspiration. “If I’m feeling like I’ve listened to the same kinds of things for a while and I want to hear something I’ve never heard before, I might go into the British Library and just listen to something in their collection of basically everything recorded on the African continent,” he says.

But while he’s happy to pay tribute, he’s conscious of not just recycling influences, instead preferring his musical research to help him break new ground. “I like to assimilate music, I’m not a big fan of pastiche,” Shabaka explains. “So I don’t like to listen to music and be able to hear those influences clearly on the record.

“I like the idea of hearing something, just letting it seep into you and doing your thing. So the way I normally compose, if I’m listening to say music from Tanzania, I’ll listen and listen and listen and then just freewrite, write whatever comes out of my head for weeks and weeks. Then I’ll go back and structure it, but maybe in accordance to those abstract ideas that I learned while I was listening to the music in the first place. I could be listening to Haitian music, but you’re not necessarily going to hear Haitian music in the album.”

Africa is obviously a huge influence, but Sons of Kemet’s horizons stretch much further. Along with his other Mercury Music Prize-nominated outfit The Comet is Coming, they fit comfortably into a family of the most exciting contemporary jazz outfits, groups like Toronto’s Badbadnotgood and Manchester’s GoGo Penguin, who are putting their own flair on modern jazz, integrating influences from hip hop, dance music and elsewhere. In fact, as Shabaka explains, the biggest influence on the concept of the forthcoming record comes from the minimal, building sets of techno and house music.

“Generally, jazz is about tension and release,” he explains. “You go towards a place then you come off it. Whereas with dance music it’s about the come-up, it’s about gradually drawing people into that space. I can see the parallels with a lot of traditional African ceremonial music I’ve been listening to recently. Those guys play for hours at a time, they’re just getting everyone into a vibe and they’re they’re holding that with drums. It’s music for dancing non-stop, for the purpose of entering a trance.”

As we wrap up our conversation and Shabaka heads back to prepare for his set, pushing through the electric crowd in their patterned shirts, horn-rimmed glasses and bebop suits, what does he see as the most exciting contemporary expressions of African culture in London today? “I think most about a phrase from I heard in a lecture on Afrofuturism from Kodwo Eshun, a British-Ghanaian writer and filmmaker, who framed it as a poeticisation of the past,” Shabaka explains.

“I really like that idea of taking something from the past that we take as a given or take as a stigma, but actually making it poetic, reframing it in a way that we decide – and that ‘we’ can be anybody. That’s what I get from a lot of bands in London; they’re taking a traditional idea or an idea that’s static in the context of tradition and reframing it, adding other elements and flipping it on its head to make it into something that’s malleable and forward-moving.”

Sons of Kemet’s Lest We Forget What We Came Here To Do is out now.

Linkedin
RELATED ARTICLES
OTHER ARTICLES
Finland-born photographer Sirkka-Liisa Konttinen looks back on her decades-long documentation of life in Northern England.
LGBTQ+ students are keeping the spirit of the original Pride alive by fighting for liberation for everyone, not just their community.
For decades, an area of East London has served as a community hub for Vietnamese people looking for a taste of home.
A new edition of a seminal book brings together iconic images of the band onstage in their full glory and backstage in moments of unguarded camaraderie.
Proposals to introduce a minimum GCSE threshold for student loans will disproportionately affect those from marginalised backgrounds.
In the wake of the decision by the supreme court to overturn Roe v Wade, thousands of protestors filled the streets to express their rage and anguish.