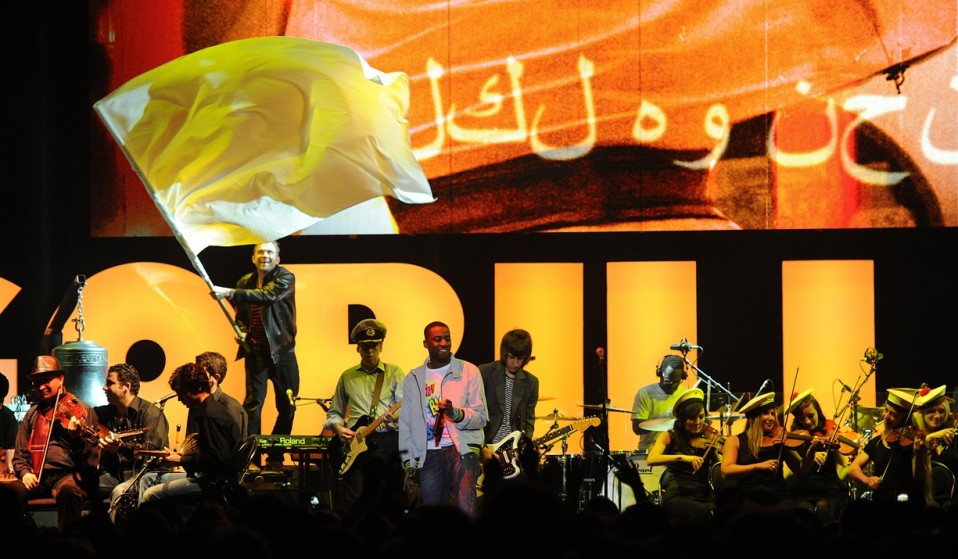 The Syrian National Orchestra for Arabic Music will be performing live this summer at a rare London concert.

The Syrian National Orchestra for Arabic Music will be performing live this summer at a rare London concert. It'll be the first time the orchestra has appeared together since conflict broke out in Syria in 2011, forcing the group to scatter. Special guests including frequent collaborator Damon Albarn will also be joining them.

A leading Syrian orchestra is reuniting for a rare concert this summer at London’s Southbank Centre. The perception of Syria has recently been so monopolised by stories of conflict that little attention has been granted to the local popular culture decimated in the civil war. One such institution to find itself scattered across the world in the wake of atrocity has been the Syrian National Orchestra for Arabic Music (SNOAM).

Formed by the late Iraqi conductor Solhi al-Wadi in 1993, the orchestra has travelled the world and in 2004 took up residence at the Damascus Opera House. But since the uprising against Bashar al-Assad began in 2011, the Opera House has been regularly targeted in airstrikes, international performers have declined to appear, and visitors have dwindled. Conductor Missak Baghboudarian, who works regularly at the Opera House, told the Times of Israel that concerts and plays still take place, but sporadically and with a skeleton staff. “It is not easy to play when you hear every day that people are dying,” he said. “But music is life – it brings people together.”

For SNOAM, the summer concert (designed as the first in a potential series of events this year) marks the first public performance by the entire orchestra, led by conductor Issam Rafea, since 2011. Appearing as support will be several so-far-unannounced guests, as well as Damon Albarn, who previously worked with the orchestra on the Gorillaz track White Flag. The orchestra then went on to join the band on their 2010 world tour.

Africa Express Presents The Syrian National Orchestra occurs on Saturday 25 June, and tickets can be bought at the Southbank Centre website.

Linkedin
RELATED ARTICLES
OTHER ARTICLES
Photographer Jeffrey Silverthorne always treated his subjects – often those living on the margins of society – with empathy and respect.
Meg Handler’s photos capture diverse groups of New Yorkers coming together for the collective cause of civil rights.
As the cost of living crisis bites, letting go of treats to keep us going is proving difficult – but we should’t just blame ourselves for our financial worries.
A new documentary tells the story of an unassuming cul-de-sac of 13 timber framed houses built by Fusions Jameen – London's first Black housing co-op.
Ireland’s national sports are modernising. At the forefront of this movement is Na Gaeil Aeracha, the country’s first ever queer GAA club.
Recent research is highlighting the drug’s enormous potential for treating substance abuse.