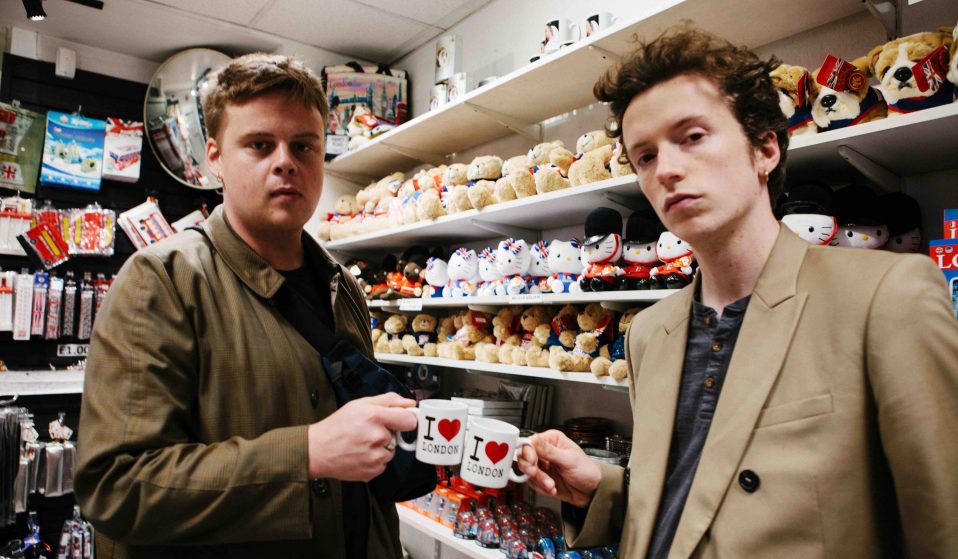 With their debut album, the London duo narrate the trials of life in your mid-to-late-twenties. For them, it’s about seeking out the magic in the mundane.

With their debut album, the London duo narrate the trials of life in your mid-to-late-twenties, looking for light in suburban estates and crowded local pubs. For the band, it’s about seeking out the magic in the mundane.

Joey Bradbury and Rowan Martin of The Rhythm Method first became acquainted during the British indie wave of the mid-noughties. Both in bands at the time, they found themselves moving in the same London circles and subsequently hit it off – it was, in their own words, a case of opposites attracting.

“When I met Rowan, he was dressed as this sort of new romantic – he had trousers tucked into boots,” says Joey. “When he met me, I was this loud lout. It was yin and yang.”

That said, it would take a while for them to begin making music together. Although Rowan had an inkling that they’d work well as a duo, he was more into the idea of going solo; Joey, meanwhile, was happy making “weird GarageBand music” alone in his bedroom.

It wasn’t until they ended up moving in together that the Rhythm Method was born. With Joey on lyrics and vocals and Rowan – a multi-instrumentalist – providing the musical backdrop, the pair promptly began carving out their own strange little niche in British pop. Naming ’70s sitcoms and offbeat YouTube videos as primary influences, their sound borrows from the likes of Madness, Squeeze and The Streets. They’re at their strongest when detailing the magic in the mundane – night buses; local boozers; Middlesex – Joey, with his spoken word delivery, serving as a tour guide through the humdrum trials of life in your mid-to-late-twenties.

Today, they’re sat in a cosy south London pub to discuss How Would You Know I Was Lonely?, their debut album. Joey, dressed in cycling garb  (“my fitness regime has kicked into gear!”), is the slightly more animated of the two, prone to winding anecdotes and fits of laughter. Rowan’s happy for him to take the reigns, chipping in to add weight to his bandmate’s responses. “We’re a resistance,” he says. “Not against pop music, but against pop music that doesn’t mean anything.”

Do you remember the first time you played together?

Joey: I mean, there was a Rhythm Method gig before Rowan decided to join the band. Initially, the Rhythm Method was just me in my bedroom, and iPhone GarageBand. Our friends Real Lies were starting their live show up and asked if I wanted to support, so I said, ‘Yeah definitely’ and performed. I feel the pictures that turn up from that evening could potentially end up in my cancellation.

Joey: There was a political statement made, which I completely stand by. The way in which it was made was quite… garish, shall we say. I was dressed as a Catholic preist and I had a friend of mine in a balaclava – I told him not to wear it – with an Irish flag on him, and my other friend had a Palestinian flag on him. But I completely stand by the statement I was intending to make.

Joey: ‘Look at me, I’m politically engaged! I know about the Middle East, I know about Ireland!’ I don’t know about any of them really. But I fundamentally stand by what I was trying to say. Although I see these photos come up occasionally and think, ‘Okay… a little bit garish.’

Rowan: I watched it in the audience. Tears were pissing down my face. I’d never seen anything quite like it – jaws were open. People still get that reaction even when he’s not doing that, just because of what we do musically. We still get that jaws on the floor thing, which is great.

I wanted to ask you about that. You say your favourite kind of response to your music is someone turning around and saying, ‘What the fuck is that?’ Why?

Joey: We’re exploring that marmite status. There’s nothing worse than being referred to as, ‘Alright.’ I’d rather someone vehemently hate us, or vehemently love us, then be like, ‘Yeah they were fine last night.’ Numerous times on Twitter, we’ll get people who, after a gig, tweet us like, ‘What the fuck did I just watch? That was awful.’ Then a few days later they’ll @ us again, like, ‘I can’t get any of your songs out my head.’

Rowan: We’re living in a very tasteful era. Bands want to be wallpapery. Every aspect of what we do – and this was never a conscious decision – is supposed to be quite alarming. With the production, a lot of people talk about how bad it is. I think that’s great. I can’t think of anything worse than people going, ‘Yeah, the production is up to scratch.’ But that was always our instinct: to be a bit too honest, a bit too ourselves.

You’ve spoken about wanting to be a ‘middle band’ – what did you mean by that?

Joey: The idea of the niche-crossover band has died, really. You get guitar bands being big bands, but they were never a niche in the first place. Someone like The Streets, for me, is symbolic of an era where the niche-crossover was a thing. That is something that we do definitely aim towards.

Rowan: The middle has always been our place. Whether it’s The Streets, Dexy’s [Midnight Runners], Madness, Style Council… They occupied that middle ground – pop music but it’s also intelligent; it’s cool, but it’s also for everyone. I think that’s a really interesting place to be. Rather than, ‘We’re punk’, or, ‘We’re super pop.’ 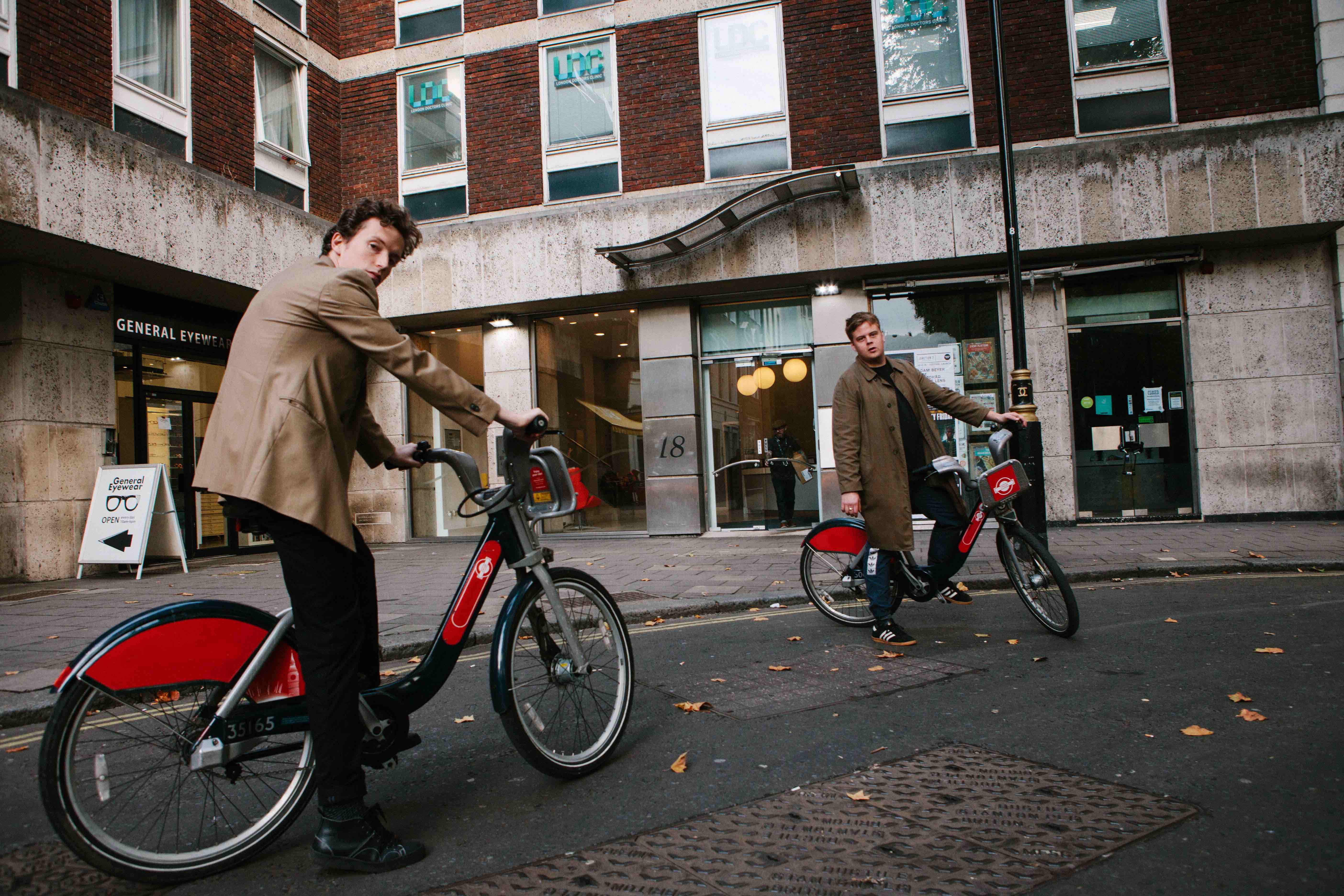 What do you think you bring out of each other that others don’t?

Rowan: Joey’s very much impulsive, impatient. His first idea is the best idea. Get it down, get it out, make the statement. Whereas I’m the tinkerer, quietly thinking in the background, trying to perfect everything as much as possible. Together it’s like two halves of one brain. If it was just me, it would never get released. If it was just Joey-

Joey: – It would be too much. It would be what it was before. Releasing a song every two days, with an average of about five listens each. There definitely needs to be a filter in both respects, really. We balance each other out.

Has your relationship changed since you started making music together?

Joey: But also weirdly not. I still don’t like him.

Rowan: I hate him more.

Joey: It’s weird, when bands spend more time together, that’s when they fall out. But if you never liked each other in the first place, then you’re starting from a good base. [To Rowan] But I’m intrigued, how do you think our relationship has changed?

Rowan: We’ve had to become a professional band in some ways. We do have to think in a business-like way, which we never used to when we were just mates.

Joey: Not that it’s helped.

Rowan: Even that it’s lovely that we’re where we are now, we’ve taken a big old detour along the way. A question we often get asked is, ‘What the fuck happened, why has it taken this long?‘ It’s because we’ve both gone off the rails in many ways. Our relationship with each other, ourselves, everything.

How do you mean?

Rowan: We’ve been through the industry mill and come out the other side. We’re very comfortable in who we are now. We know that’s not for us. We’ve come back to the philosophy we had at the beginning – try and make each other laugh, have a good time, spread the word.

Joey: When the stiffs at Radio 1 first came along, it was like, ‘Oh, we can do this?’ We never tailored our songwriting to that, but I guess we tailored our attitudes in a way. Me in particular. I want to be a popstar, I want to be rich. Why wouldn’t I? But now, we’ve completely reverted back to what made us us.

Your music explores with the idea of suburbia, often in a very romantic way. I was wondering, given the state of Britain now, has our idea of suburbia changed? Before it was synonymous with close-knit communities, happy families. Now, it’s isolation; ignorance even.

Rowan: London and England are two different countries – socially, politically, economically. Where I grew up, Zone 5, south-west London, that’s like the DMZ. It’s quite Borderlines; an interesting, slightly schizophrenic landscape. Politically, you get a bit of both. It’s also incredibly boring – just houses and trading estates and massive roads. But there is a kind of romance in that. That’s what we tried to capture with ‘Sex And The Suburbs’.

Joey: My version of suburbia is that the actual place is wonderful – the green spaces, the riverside, all that stuff. It’s just the people who live there.

Rowan: Where I live, it’s Lib Dem country. Neither here nor there. It’s that story of people from central London moving out to the suburbs in search of gardens and picket fences. Although there is a poetry in that.

The idea of Britishness is at the heart of your music too. Have your relationships with national identity changed?

Joey: To be honest, I feel like I’ve become more British within the last few years. In a way that’s fighting against the fact that the Brexit side has taken credit for the great things that this country has produced. It annoys me. The amount of great music and art and television and film.

Being proud of being British shouldn’t be a dirty word. And I’m not saying that in a way that’s like, ‘I want to be able to walk down the street waving a Union flag.’ I have no interest in doing that. My Irish roots probably overtake that. But I have this accent, so I can’t really fight against that. It does feel like the right has taken credit for the good shit. In a lot of ways, I want to reclaim Britishness.

Rowan: I was just thinking back to watching an interview with IDLES. They’re a good band and everything, but the lead singer was like, ‘What’s being British? Being British is nothing. It’s just fish and chips, it’s boring.’ I remember thinking, ‘Fair enough, sounds cool, but you’re going to have to get rid of about three quarters of your influences.’

Don’t throw your baby out of the bathwater. Try and reclaim it, keep the good, get rid of the bad. We’ve never consciously thought about that. We’ve just tried to sound like our surroundings.

A lot of musicians trying to do that often sound angry. Could your music ever be angry?

Rowan: I don’t think we could pull it off. We both love ABBA.

How Would You Know I Was Lonely? is out June 21 on Moshi Moshi.

Linkedin
RELATED ARTICLES
OTHER ARTICLES
The last few years have seen an increase in LGBTQ-led initiatives to feed the hungry, with many finding ways to stay afloat despite the challenges.
A new edition of a seminal book brings together iconic images of the band onstage in their full glory and backstage in moments of unguarded camaraderie.
Freddie Miller’s new series of photographs investigates who today’s trainspotters are and what drives their unfettered enthusiasm.
For decades, an area of East London has served as a community hub for Vietnamese people looking for a taste of home.
Photographer Matthew Brookes recalls following a group of young people in Venice Beach living in search of the perfect wave.
Wealth inequality and the rising cost of socialising is placing a strain on people’s relationships, reports Eve Upton-Clark.